Shrink down for some microscopic magic from Cirque du Soleil, get shaking at the Ace Hotel and see if a sequel can live up to the original ... band this weekend. 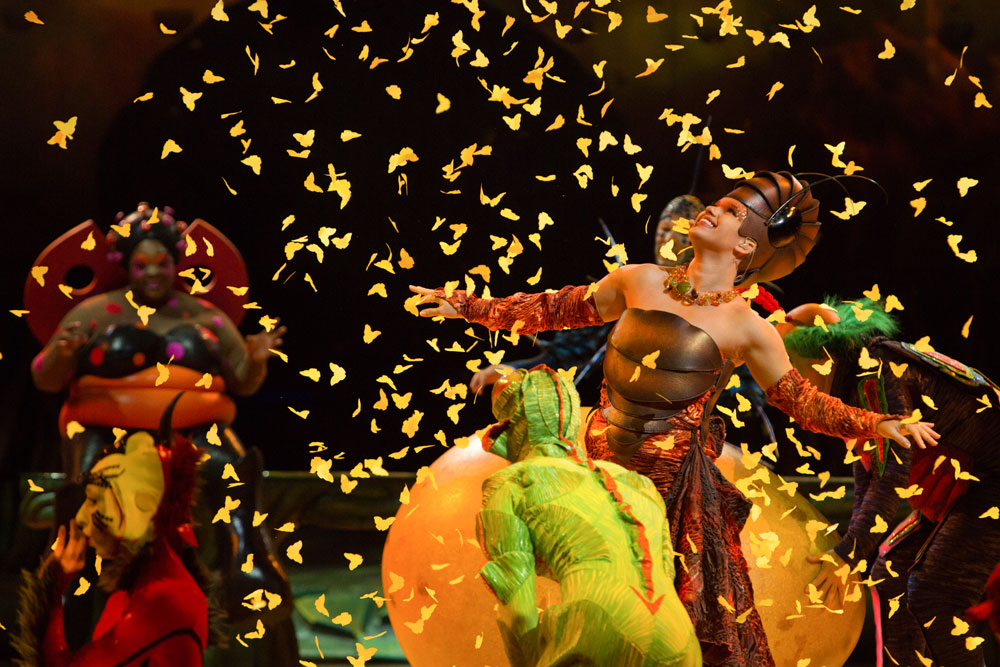 The central philosophy of Cirque du Soleil, as far as I can tell, is this: Let’s come up with things that no human has ever thought to do, then do those things in a more impressive way than any human could.

Even when the acts in question are relatively comprehensible — like, say, juggling oversized kiwis with one’s feet, the opening act of “OVO” — the performers of Cirque du Soleil perform with a mind-boggling level of proficiency. When the acts fall into established circus arts, such as trapeze or tightrope-walking, there is so much artistry, beauty and strength displayed that they’ll cause the most skeptical viewer’s jaw to drop.

“OVO,” a feast of insectoid acrobatics and humor currently taking residence at PPG Paints Arena, is funny, dazzling, artful and inspiring. The largest routines in this show are maddening acts of death-defying acrobatics; you’ll find the smaller moments of refined clowning equally as memorable.

When I first saw a Cirque du Soleil show a year ago, I became an instant fan. After this latest installment, I’m contemplating out-of-town trips to see more. There aren’t many nights of entertainment more dazzling than this.

There’s tribute, then there’s chutzpah. Anyone can say they’ve got a Led Zeppelin tribute band. Every city has one or more knock-off Zeps. But to actually call yourself Led Zeppelin 2 — implying that you are, in fact, a direct sequel to the original band — now, that takes chutzpah. Fortunately, this particular cover act backs up its gumption with artistry and, yes, remarkable accuracy; if anything distinguishes Led Zeppelin 2 from the real thing, it’s that the group is probably a bit soberer onstage than the genuine article. They’ll roll into the Rex Theater this Friday night to play “Led Zeppelin III” (the one with “Immigrant Song”) in its entirety.

Pittsburgh Shakedown, a swing dance and music weekend at the Ace Hotel, will include a Friday night opening dance with the Boilermaker Jazz Band, dance workshops and ballroom social dancing with the Hot Metal Swing Orchestra, a 14-piece big band. Learn to swing, watch the pros and hear music from years gone by. — Jesseca Muslin

It’d be awfully convenient if we could still excuse our own behavior by claiming we were under an evil spell. “I know I missed all of my obligations for the past three days, but you see, I was entranced by a sorceress.” That kind of thing. You could get out of a lot of social situations that way. Handel’s “Alcina” concerns just such a sorceress, who lures lovers to her island home only to turn them into animals when she tires of them. (Again: This is not the worst version of romance I’ve heard of.) See this masterpiece performed by Pittsburgh Opera, partnering with Chatham Baroque, in the intimate CAPA Theater.

In 1803, Beethoven made a resolution to write an opera. And folks, he did it … a decade later. To be fair, the composer premiered two versions of the opera during that time, but it wasn’t until 1814 that the final revisions were made. Pittsburgh Symphony Orchestra will perform that final draft, “Fidelio,” this weekend, conducted by Manfred Honeck and joined by the Mendelssohn Choir of Pittsburgh. Experience for yourself the rewards of patience. — Cassidy Gruber