Revisit (or discover) a Broadway favorite at the Benedum, hear laser-aided Pittsburgh rock and, yes, take off your pants and run around this weekend. 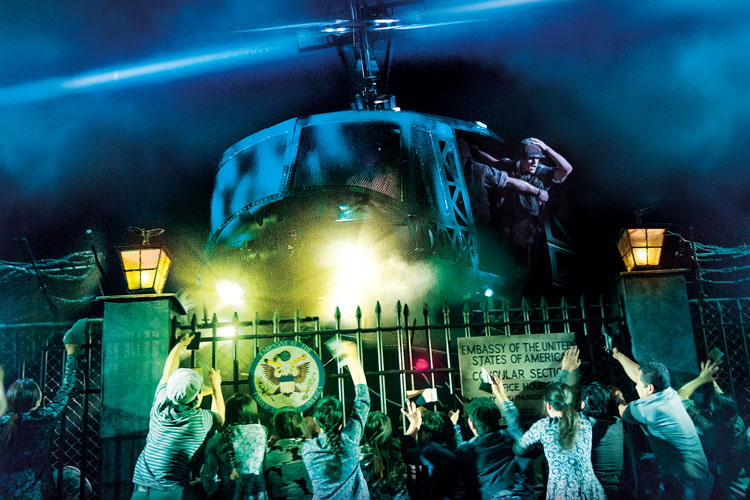 The writers Claude-Michel Schönberg and Alain Boublil have a knack for creating deeply entertaining Broadway fare out of unspeakable tragedy.

The pair’s biggest hit, “Les Miserables,” is somehow less bleak than “Miss Saigon,” the 1989 follow-up that became one of New York’s biggest-ever hits. It’s a tale of the human cost left behind when American soldiers and interests pulled out of Vietnam; it’s also a big-voiced, dramatic spectacle, replete with pulp twists, show-stopping vocal performances and an on-stage helicopter escape.

To address the problematic elephant:: Your mileage will undoubtedly vary with regards to this show’s content and context. While some half-measures have been taken to inoculate the show against longtime claims of racism, the musical — a loose adaptation of the opera “Madame Butterfly” — is, to put it gently, decidedly pre-woke. In my view, it’s such a powerful story of the human effects of western intervention in the Far East that its sins are worth absolving, but I wouldn’t blame anyone who felt differently.

This production, a touring company working off of the 2014 West End (and subsequent Broadway) revival, comes with a powerhouse cast, one of the finest I’ve seen on the Benedum stage. It’s a heartbreaking and dazzling show.

Who decided that laser-light shows were exclusively the territory of Pink Floyd, The Beatles and … usually Pink Floyd again? Okay, fine: I’m selling it short. A wide variety of styles and eras are represented in the regular laser displays at the Science Center’s Buhl Planetarium (including, every now and then, a laser tribute to “Stranger Things.”)

A laser light show with live music, however, remains a special occasion. Doubly so when the artist is a local standout. André Costello and the Cool Minors, indie-rock favorites who have become the darlings of local festivals, return to the planetarium this week to introduce never-before-heard music aided by a bespoke laser array. Costello has designed the show to accompany the songs, guaranteeing a more remarkable (and memorable) experience than seeing lights emulate the “Dark Side of the Moon” cover.

What, so if I’m at a public pool in a Speedo, that’s entirely acceptable, but if I stroll past PNC Park in boxer briefs, I get funny looks? Yes. As well I should. Except during Cupid’s Undie Run, an annual fun run — don’t worry, jogging-averse readers, it’s only a mile — and party that encourages participants to limber up and race in their underthings. The event, which is held in cities nationwide, benefits neurofibromatosis research, so any associated awkwardness you may feel should be more than offset by your contribution to charity. The race is sandwiched by an afternoon party at North Shore bar McFadden’s, during which proper attire will remain optional.

If you’re interested in what kids these days are listening to — and why — then you should turn your gaze toward King Princess. The 21-year-old singer is at the crest of a wave of new and interesting pop music; as we move away from the super producer-manufactured boy bands of yore, there’s space opening for more authenticity, more innovation, more queerness. King Princess’ youthful openness and musical experimentation reinforce the permission pop music is giving itself these days to be smart and sincere and a lot of fun to listen to. — Cassidy Gruber

Bodiography Contemporary Ballet Company takes to the Byham Theater stage with a 90-minute showcase of new and existing works; the company also will host a special guest appearance by award-winning New York-based Buglisi Dance Theatre. Bodiography director Maria Caruso contributes three short ballets to the program, including “Psalms,” which focuses on light, love and kindness in the face of hatred, and a new, neo-classical piece inspired by astronomy. Also on tap are a world premiere choreographed by Virginie Mécène, artistic director of Graham 2, and modern dance icon Ze’eva Cohen’s “Meditation on a Square” (2006) and a solo performed by Caruso. The Buglisi troupe, directed by Jacqulyn Buglisi, offers two works, including “Threshold” (1991) to an Arvo Pärt score. Limón Dance Company’s Ty Graynor augments the Bodiography cast. — Karen Dacko