See holiday favorites on a gargantuan screen, revisit the Sugar Plum Fairy and get your shopping done early this weekend. 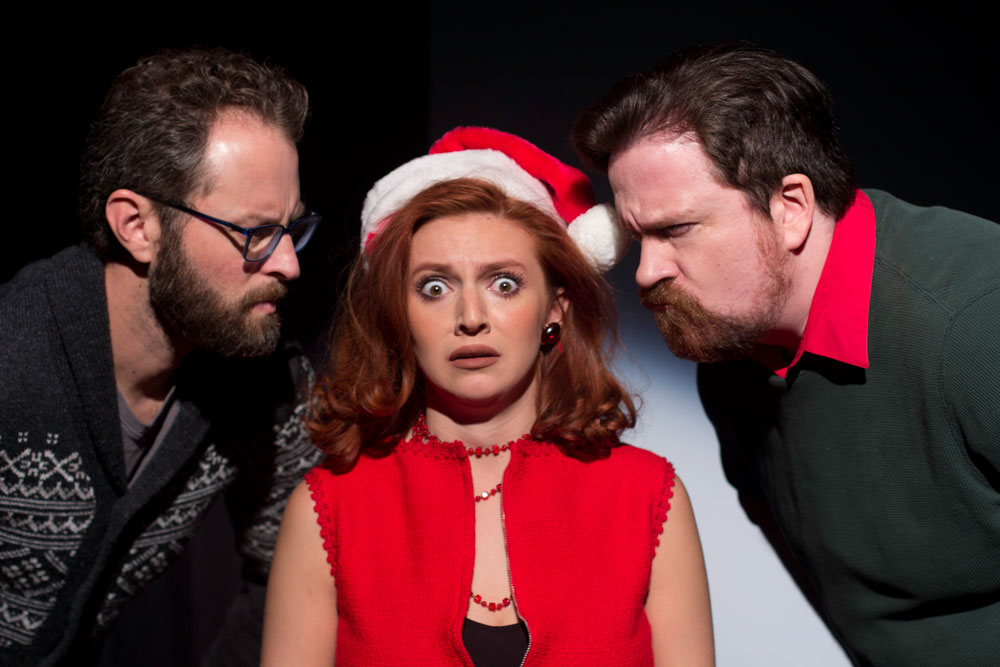 “THE NIGHT BEFORE CHRISTMAS” AT ARCADE COMEDY THEATER. PHOTO BY JULIA METELSKY.

The Best Reason to Leave Your House This Weekend
Holiday Favorites at the Rangos Giant Cinema
Through Dec. 26
Carnegie Science Center

Since animated classics such as “Frosty the Snowman” and “Rudolph the Red-Nosed Reindeer” began yearly television broadcasts decades ago, holiday-themed entertainment has traditionally been an at-home activity. The family wrapped in warm blankets in front of the television, a fire crackling in the next room, mugs of hot cocoa adding fragrance to the air.

Yeah, let’s quit that. Microwave popcorn is no good, and your TV isn’t big enough. Head into town.

All month, the Rangos Giant Cinema at the Carnegie Science Center will be reviving holiday favorites on Pittsburgh’s largest and most impressive screen. If you haven’t yet experienced the theater, there’s nothing in town that can match it for scale, clarity and quality; even familiar films will seem brand new on this screen.

Six screenings of Robert Zemeckis’ “The Polar Express,” in 3-D, are scheduled. A single showing of “National Lampoon’s Christmas Vacation” is already sold out, but tickets are still available for “Elf,” “It’s a Wonderful Life,” “White Christmas” and more. After the holiday, the movies aren’t as seasonal but the nostalgia will be through the roof: Showings of “The Princess Bride” (Dec. 27), “Harry Potter and the Sorcerer’s Stone” (Dec. 28) and “Titanic” (Dec. 29) round out the year.

Speaking of movie theaters near the Point: Reports of the Harris Theater’s death have been slightly exaggerated, at least for now. While its sister cinema in Regent Square remains shuttered, the Harris is owned by the Cultural Trust, which did not accept the sudden closure ordered by the Pittsburgh Center for Arts and Media. Whatever the future holds, “Mickey and the Bear,” which shows at the Harris through Dec. 12, is an absolute gem, previously featured as part of the Three Rivers Film Festival; The A.V. Club just included it among its best overlooked films of the year. It’s a harrowing tale of small-town addiction and generational struggle made remarkably compelling by a pair of excellent performances. If you want great cinema to continue on Liberty Avenue, vote with your wallet this weekend; you’ll get a great movie in return.

The most wonderful time of the year will be thoroughly deconstructed in a pair of theatrical presentations, each running through the weekend before Christmas. At Arcade Comedy Theater, Anthony Neilson’s “The Night Before Christmas” features a pair of no-goodniks capturing a real-life elf. Maybe. The comedy theater, which has had hits with fully staged productions including this year’s “Bubble Boy: The Musical,” presents the Pittsburgh premiere of the farce, directed by Arcade co-founder Jethro Nolen and starring “Knights of the Arcade” favorite John Feightner, longtime sketch maven Justin Vetter and multi-hyphenate performer Vanessa St. Clair.

Find out what it’s like to be a 33-year-old man applying for a job as a Macy’s elf as David Sedaris’ “The Santaland Diaries” comes to life at City Theatre. The essay introduced Sedaris to the world in 1992; today, he’s a bestselling author, humorist and writer for The New Yorker. The show, performed at City’s Lester Hamburg Studio theater, is a hilarious and irreverent tale of holiday hijinks. — Lauren Davidson

Listen: You’ve bought your loved ones too many gifts at Target. We know, it has interesting stuff, and that RedCard is burning a hole in your wallet. But step up your game for at least one round of gifting with a trip to the 15th-anniversary edition of Handmade Arcade, a cornucopia of unique gift items featuring more than 250 vendors. You can pop into the market for free from 11 a.m. to 7 p.m. Saturday, but if you want to get a jump on the shopping competition (and avoid massive, massive crowds), consider either the Friday-night preview party or an hour of early shopping Saturday; you’ll have to pay to get in early, but you’ll make up for it in relaxation.

Pittsburgh Ballet Theatre launches its brave soldiers into battle against evil mice, unfolding a colorful carousel as the annual production of “The Nutcracker” takes center stage. Choreographed by artistic director Terrence Orr to P.I. Tchaikovsky’s hummable score, the two-act, Pittsburgh-themed ballet follows the fantastic journey of young Marie and her Nutcracker Prince to The Land of Enchantment, a dream world populated by dancing denizens. — Karen Dacko

Tags: things to do