There’s No Chance You Can You Beat Hoops, the Basketball Robot

Day after day, a robotic arm at the Carnegie Science Center outshoots the best basketball players in the world. 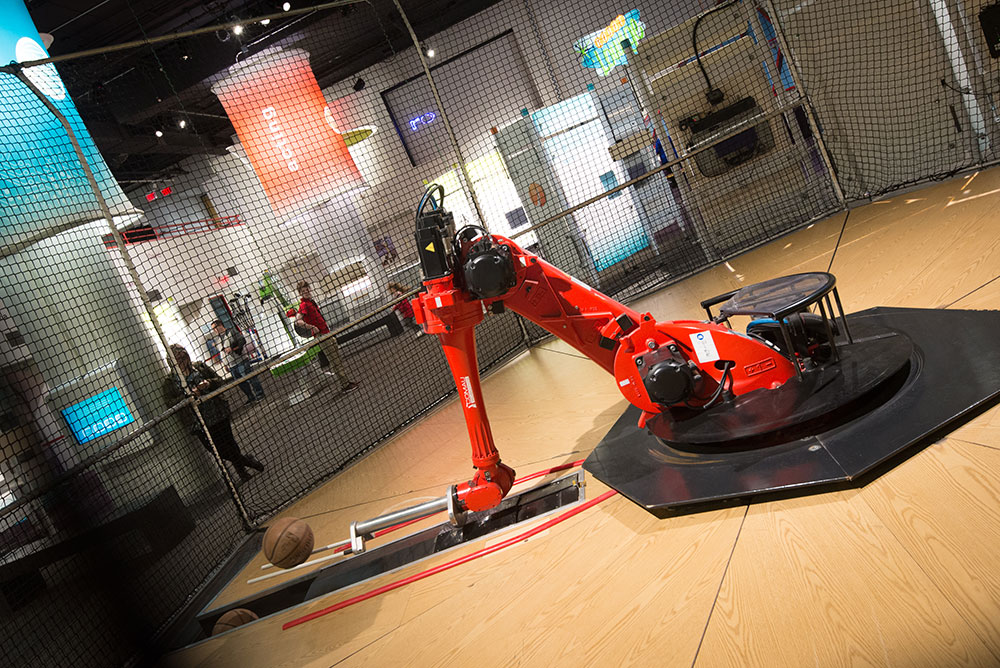 The Robot continues shooting, even if no one is in the room.

Whenever the Carnegie Science Center is open, Hoops, a robotic arm designed for work in an automotive factory, repeatedly flings basketballs at a hoop.

Upon encountering this mechanical athlete in the Science Center’s RoboWorld exhibit, I silently challenged it to a best-of-10 free throw competition. I’m not exactly a refined shooter, but I was confident I had a sporting chance. Hoops isn’t perfect; if you watch for long enough, you’ll see a ball careen off of the rim.

Hoops doubled my score — even though it underperformed during our showdown. It shot 80% against me; including all shots attempted on the day I visited, it was shooting just shy of 98%. For my part, my 4-for-10 performance was better than the masses; humanity was shooting a feeble 33% on the day. (For more on basketball players who shoot much better than me — though admittedly not as well as Hoops — read about this season’s Duquesne Dukes men’s team here.) 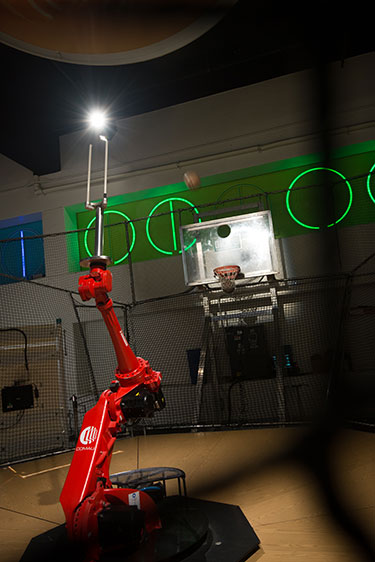 The fact that the robot is imperfect is illuminating. Many casual basketball viewers wonder why even the best players in the world can’t shoot perfectly from the free-throw line; why can’t the most rudimentary facet of the game be perfected? Because it’s impossible to adjust for all the variables, particularly the massive x-factor of a human brain. Even a robot, designed only for this task, can’t be perfect.

“We programmed it for accuracy based on average-aged balls,” explains Dennis Bateman, the Science Center’s senior director of exhibits and experience. “If we put new balls out, they’re a little bit stickier. If they’re too old, they get a little bit grungy.” (Please take this information the next time you’re inclined to blame the ball for a bad shot: Even robots can get screwed up by sporting goods.) He says the air pressure in the room can cause an occasional miss as well.

The rest of RoboWorld is well worth your time, too. I’m a big fan of the Robot Hall of Fame, which features mockups of fictional robots dating back more than a century. (You can, and should, selfie with C-3PO.) Tickling some steampunk ivories with Eric Singer’s SpiroPhone is also a lovely diversion.

Bateman says RoboWorld helps illustrate that real-world robots look markedly different from Andy, the automaton who greets visitors, and the droids in the Hall of Fame. “Most people think of humanoid, science fiction robots. The gallery is filled with real robots that don’t look anything like that,” he says.

“If you’re going to paint a car, you only need the arm, you don’t need the rest of the body.”

I’d call Hoops the highlight of the exhibit. It’s a hands-on demonstration of what we can teach machines to accomplish — and how (seemingly) happy they are to keep to their tasks, day in, day out, with stunning precision.

After it sank the final shot, Hoops pumped its hand in the air in victory. This was not part of any calibration or adjustment; my opponent was simply reveling in its superiority. I knew it was programmed to do so. Yet it felt deeply personal.

This article appears in the February 2020 issue of Pittsburgh Magazine.
Categories: From the Magazine, Hot Reads, Things To Do