The Twisted Frenchman Gets an Actual Frenchman

New general manager Yannick Thomas Comes to Pittsburgh with a wealth of Michelin star experience in Cannes and elsewhere. 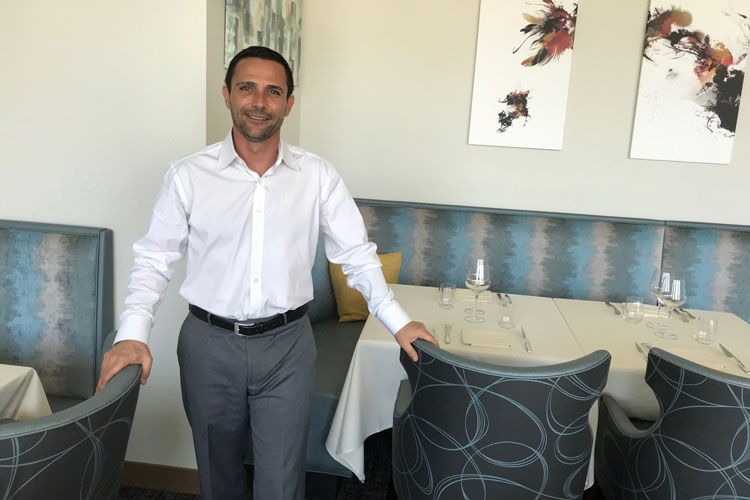 Yannick Thomas met his wife 20 years ago while he was working at Chez Gerard, a French restaurant just outside of Uniontown. They remained in the region for about a year and then moved back to his native France, where Thomas built a laudable front-of-house career, including his most recent position as general manager of Restaurant Paloma in Mougins and, prior to that, maître d' at Le Palme d'Or in Cannes; both restaurants have two Michelin stars.

Thomas and his wife returned to Pittsburgh earlier this year so that she could be closer to her family and for their 11-year-old son’s education. As he looked for a position in one of the city’s restaurants, he says he was drawn to The Twisted Frenchman, a 42-seat modern French restaurant which reopened last year down the block from its original East Liberty location following a multimillion dollar renovation of an old auction house.

Executive Chef/Owner Andrew Garbarino runs two eateries in the building, and while the more casual Bar Frenchman brasserie will continue to be polished (tip: get there ASAP for bar manager Greta Harmon’s “Taste the Rainbow” cocktail menu), Thomas’ charge is the refinement of the upstairs space that houses the The Twisted Frenchman, for which Garbarino has Michelin aspirations. “It's a challenge for me to help Andrew be a little better up front. He doesn't need my help in the kitchen, he's good already, but I can help him with the service,” Thomas says.

As if to demonstrate his keen eye for detail, Thomas tipped a couple of wine glasses to rest sideways on the table, an indication to the restaurant’s staff that the glassware needs better polishing before it can be used for service. "The little details are the most important thing. From the second they come in to the second they leave, the details need to be paid attention to,” he says.

“He’s noticed all these little things we weren't paying attention to,” says Garbarino.

Precision polished glasses, crisply ironed tablecloths and tiny, wood-topped stools that act as purse holders (Thomas nixed purse hooks as horribly inelegant) might sound a bit stuffy or heavy-handed to a casual diner, but those details are precisely the service accoutrements an aspirational restaurant such as Twisted Frenchman needs to step into a higher caliber of destination dining.

Thomas says that once he works through the restaurant’s wine inventory, he’ll tilt the list more deeply toward France, perhaps even working with his former sommelier at Restaurant Paloma (as well as the Pennsylvania Liquor Control Board) to import some hard-to-find labels.

For now, however, Thomas plans on continuing to train the restaurant’s front-of-house staff to match his expectations. “They don’t have a choice. Everything needs to be perfect,” he says.