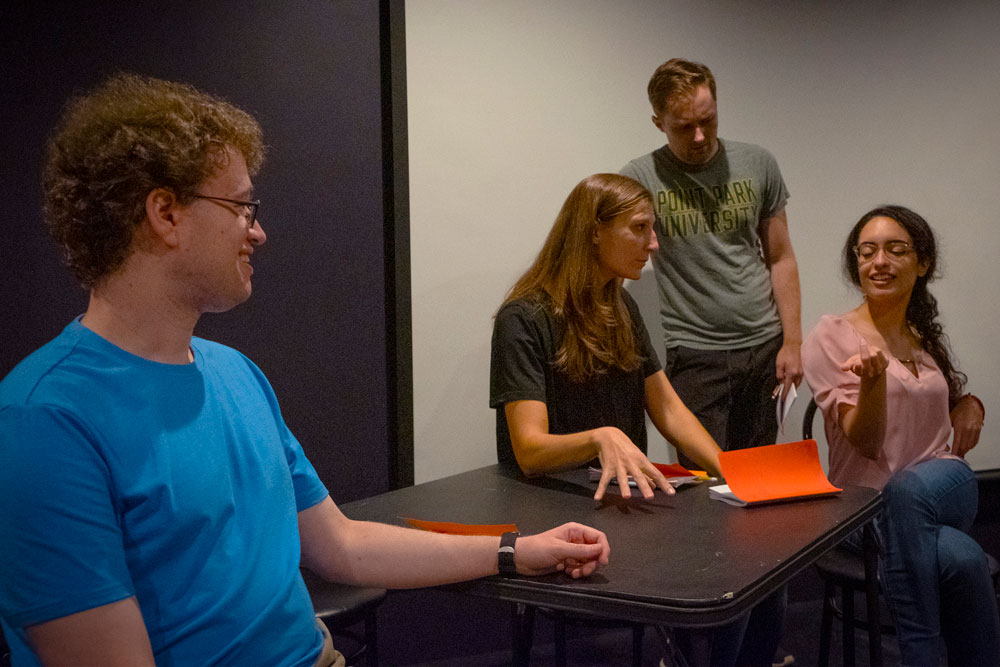 Four white people try to put on a play about Thanksgiving. What could possibly go wrong?

That’s the plot of “The Thanksgiving Play,” debuting this month at Downtown’s Arcade Comedy Theater, and the answer, it seems, is “a lot.”

The show is a comedic farce written by Larissa FastHorse, a member of Sicangu Lakota Nation. It makes use of satire to tell a story about race, tradition and American history. Toeing the line between absurdity and reality, “The Thanksgiving Play” follows the exploits of four well-meaning but ill-equipped people trying to put on a culturally sensitive play about Turkey Day at their local school.

“When I first received the play from Arcade, I wasn’t sure. I’d never read a play of this nature before. It wasn’t until the audition process that I really got into it because I heard it out loud, and that’s when I got it. It clicked,” says director Linda Haston. “It’s highly, highly, highly comical and serious at the same time because it’s so outrageous that you can’t believe people like these people exist. And then you know people that are like these people.”

Nia Johnson, the show’s production manager and Arcade’s manager of new programming, says she hopes the audience will recognize their own shortcomings in the eccentric characters and their over-the-top shenanigans, and that they’ll be open to broadening their own horizons and continuing the important, albeit difficult, conversations that surround the holiday.

“My belief is that FastHorse, the playwright, intended this play as a mirror,” she says. “It’s very Mary Poppins: A spoonful of sugar helps the medicine go down.”

“The Thanksgiving Play” will premiere after more than 18 months of pandemic pivots, outdoor performances and online programming. Arcade was prepared to put it on in 2020, but then the pandemic “stuck its big, fat foot all over everybody,” Johnson says.

But after watching a performance of the play over Zoom, starring Bobby Cannavale, Keanu Reeves, Heidi Schreck and Alia Shawkat, Johnson and the rest of the Arcade team knew they still had to do it once the theater reopened.

“Being able to see the production of it in the spring just really pushed it over the edge that when we came back, that was the production we wanted to do,” she says.

That time has come — and with it came an added layer of significance.

“The play has taken on new meaning post-2020,” says Mike Rubino, Arcade’s director of programming. “Pre-2020, it’s easy to assume it’s going to be just a swipe at liberal wokeness, and that’s it. But I think now, in a post-George Floyd America, it has a deeper meaning and it is much more applicable like [Nia Johnson] said, as a mirror.”

He adds that productions happening now, including the one at Arcade, are approaching the play differently and digging in deeper, unafraid of shying away from the conversations about race and representation in the theater community.

“It’s both a critique of the American education system, but it also is a very knowing critique of theater. The idea of performative wokeness versus having your eyes open about representation and actually making things to make change. There’s a difference,” he says.

“The Thanksgiving Play” was one of the top-10 produced plays in the country in the 2019-2020 year, according to Rubino. With it as her breakthrough piece, FastHorse is the first Native American author to reach that top-10 list — for a play that features an all-white cast.

He explained that FastHorse had trouble getting other plays produced because most of her other work features Native American roles.

But “The Thanksgiving Play” is self-aware, even if its characters are not.

“Although this is highly farcical, the subject matter itself is a serious matter, and that it makes people think,” Haston says. “It’s so today. It’s so right now.”

While Haston isn’t interested in starting conversations — she says by now, those conversations should’ve already been started — she hopes that the play, with her touches, will continue those conversations instead. The cast and crew are coming at it full throttle, because she says anything less wouldn’t do FastHorse’s writing justice.

In “going all the way,” the goal is to use comedy as a vehicle for addressing the hard-to-talk-about issues at the heart of Thanksgiving — race, representation, history and heritage.

“Our mission is really about using comedy as a tool. It’s a way for people to process difficult things,” Johnson says. “This is a way to approach it in a way that will get at you through your funny bone.”

“This is the Arcade way,” Haston adds.