Pittsburghers Blake Dubé and Mark Spitz developed portable oxygen after a chance encounter with a veterinarian. 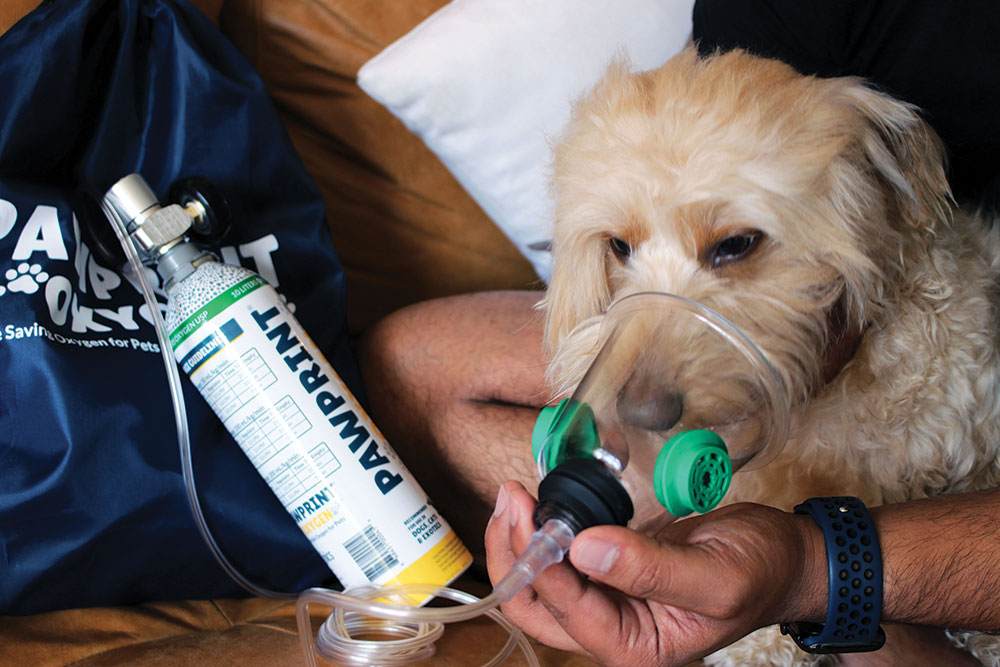 Ring the doorbell at Aeronics Inc. and Tucker, a golden retriever a few months shy of his 2nd birthday, will greet you at the door with a bark.

Every day is bring-your-dog-to-work day for Mark Spitz, Tucker’s owner as well as the co-founder and COO of Aeronics, a company in Bloomfield focused on making oxygen more accessible — especially for pets.

Spitz, along with Aeronics co-founder and CEO Blake Dubé, launched their primary product, Pawprint Oxygen, in 2019. The 10-liter canister of medical-grade oxygen allows pet owners and veterinarians to administer care to dogs and cats whether they’re at home or on the go.

While oxygen treatment certainly isn’t new to veterinary medicine — it’s commonly used to alleviate the respiratory distress that can result from conditions including feline asthma as well as congestive heart failure, laryngeal paralysis and collapsing trachea in dogs — Pawprint Oxygen is the first to make the treatment simple for pet owners to administer themselves. Roughly the same size as a bottle of water, it can also be used to help transport a pet to a veterinary hospital more comfortably. Unlike traditional oxygen tanks, it can be mailed directly to pet owners who have a prescription.

“Every veterinarian has a horror story of [a] respiratory distress patient that they either had to send in the car and say drive fast — or they had to consider putting a big dangerous tank in the car, and they don’t want to do that,” Dubé says.

While neither Dubé nor Spitz are veterinarians, they got the idea for Pawprint Oxygen from a veterinarian they were renting a house from after graduating from the University of Pittsburgh in 2017. The two were at the time developing oxygen canisters for people with respiratory disease. Dr. Joni Sarakon, a veterinarian for more than 25 years, heard about their project and encouraged them to develop a product for pets instead, saying it would be an unmet need.

Spitz and Dubé worked with Sarakon and Dr. Sean Smarick, an emergency room veterinarian, to create a product that would be easier for vets to use than traditional oxygen tanks while also fulfilling a pet’s medical needs. To ensure the product is being used as intended, pet owners must first get a prescription from a veterinarian who will determine the amount of oxygen an animal receives.

“Those two [Drs. Sarakon and Smarick] really helped us formulate this into a product that was doing right by the vets and the pets and things like that. This isn’t just a product you can go on Amazon and buy,” Dubé says.

Sarakon, who used Pawprint Oxygen in her clinic and sent it home with patients, says an animal’s demeanor changes the moment the oxygen mask is placed on his face.

“Sometimes they just close their eyes and they’re just so relieved to not have to struggle to breathe. It brings the animal so much comfort,” she says.

A can of Pawprint Oxygen costs $30.

Dubé and Spitz have gotten Pawprint Oxygen into more than 3,000 veterinary clinics across the country, with another more than 3,000 people ordering it for at-home use. Their goal is to supply Pawprint Oxygen to all 30,000 veterinary clinics in the United States, as well as to educate all veterinarians about how to use the product for effective pet treatment and transportation.

Dubé says he expects Pawprint Oxygen will “be growing a lot this year,” with plans of adding more employees to Aeronics’ team of seven.

But despite the company’s quick pace and the boxes of oxygen canisters stacked to the ceiling at the office, Tucker keeps everything calm.

“It’s less stressful when you can just pet a dog,” Spitz says.