The Important Differences Between Heartburn and Gerd 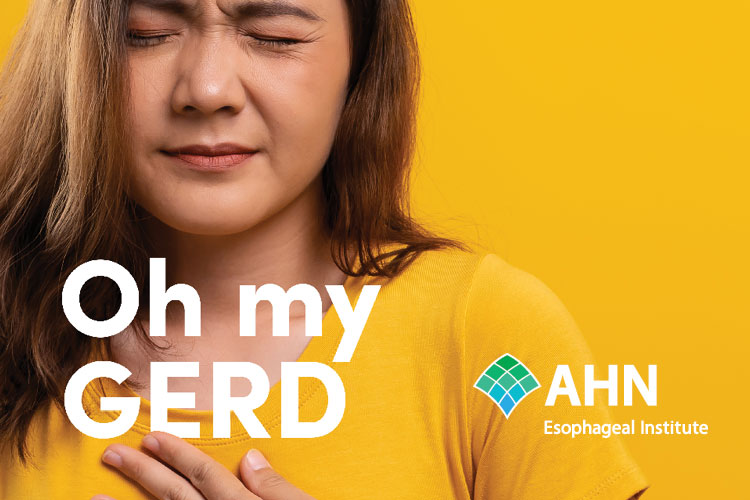 It’s no coincidence that National GERD Awareness Week falls right before Thanksgiving. Learn why gastroesophageal reflux disease (GERD) is such a big deal and why eating in moderation can help prevent it.

So, what is GERD?
GERD is a chronic digestive disease that develops when the sphincter, a ring-like muscle between the esophagus and stomach, weakens. This allows stomach acid to flow back up into the esophagus, causing acid reflux (heartburn), regurgitation, difficulty swallowing, indigestion, and a bitter taste in the mouth.

What causes GERD?
There are certain risk factors that may increase your chance of developing GERD. They include a family history of GERD, obesity and overeating, diets high in fat and low in leafy green vegetables, and certain activities like weightlifting.

The difference between heartburn and GERD
If you’re thinking back to the heartburn you got after devouring a plate of spicy nachos, don’t panic. While heartburn is a symptom of GERD, having an occasional bout of it doesn’t necessarily mean GERD.

“If you occasionally overeat and experience heartburn or indigestion, that’s not GERD, that’s an intermittent episode of reflux,” said Dr. Blair Jobe, chairman of AHN’s Esophageal Institute. “But if you routinely take over-the-counter (OTC) medication for heartburn if you know you’re going to have acid reflux, that’s low-level GERD. And if you have to take it every day to control symptoms, that’s full-blown GERD.”

The dangers of untreated GERD
Though heartburn sounds like something you can handle with antacids or an OTC medication, there are bigger things at play. OTC medications may seem to be treating heartburn — and they do help to heal erosions — but they’re really just masking the symptoms.

According to Dr. Jobe, “Because it’s a problem with the sphincter, the reflux is still there, damaging your esophagus. You just don’t feel it anymore.”

This damage is where the real problems begin. GERD can lead to nighttime regurgitation, adult-onset asthma, ear pain, teeth rotting, aspiration from reflux, Barrett’s esophagus, and even esophageal cancer.

Because cases of esophageal cancer are very low, endoscopies, a nonsurgical procedure used to examine a person’s esophageal and digestive tract, are not part of annual cancer screenings. Unfortunately, if you’re only being screened for esophageal cancer based on having symptoms of reflux, you could be overlooked.

“40% of people with esophageal cancer never even had reflux symptoms,” said Dr. Jobe. “It’s called ‘silent reflux.’ If we’re only doing esophageal cancer screenings based on symptoms, we’re missing 40% of the people who develop cancer.”

Living with GERD
Melissa Marabella, 47, knows firsthand how dangerous GERD can be. She was diagnosed with it when she was just nine years old. When she became pregnant with her son in 2000, her GERD symptoms worsened.

Melissa eventually developed chronic bronchitis, pneumonia, and adult-onset asthma. “My primary care physician (PCP) and gastroenterologist were running in circles trying to figure out what was going on,” she said.

“I was treated for bronchitis or pneumonia because that’s what the X-rays showed. I never thought it was connected to GERD because I wasn’t having heartburn. That’s because I was on medication that masked my symptoms.”

Even though she had a GERD diagnosis and had worked in health care for over 20 years, it wasn’t until she began working at the AHN Esophageal Institute (EI) in 2018 that all the pieces came together. Melissa started to learn about GERD in-depth and became a patient of Dr. Jobe.

GERD treatment at the Esophageal Institute
Melissa went through a series of tests at the EI. First, an esophageal manometry test — a test in which a thin tube goes up a patient’s nose, down their throat, and into their stomach to see the levels of stomach acid. Next, an endoscopy. And finally, a barium swallow — an imaging test that uses barium and X-rays to create images of a patient’s upper gastrointestinal (GI) tract.

These tests showed extensive damage. Melissa’s stomach, which had been formed into a small pouch during a previous weight loss surgery, had virtually been eaten away by stomach acid. She had surgery to remove what remained of her stomach so her esophagus could be connected directly to her intestines.

Despite this, Melissa is relieved. “Since my surgery, I haven’t had any breathing issues or shortness of breath. I haven’t had bronchitis or had to use my inhaler. I can sleep lying down. I finally found answers at the EI and it’s life-changing.”

How to prevent GERD
The one thing Dr. Jobe wishes everyone would do? “Eat in moderation. When you overeat, it stretches out that lower esophageal sphincter, which is the root cause of this disease.”

Keep that in mind this holiday season. Enjoy everything — in moderation. And if you do have GERD symptoms, ask your doctor for a referral to AHN’s Esophageal Institute.

10 Tips for Enjoying Holiday Feasts Without Overdoing It

How At-Risk Pittsburghers Can Stay Ahead of Lung Cancer