The airy two-bedroom condo is located in the former church’s baptistry. 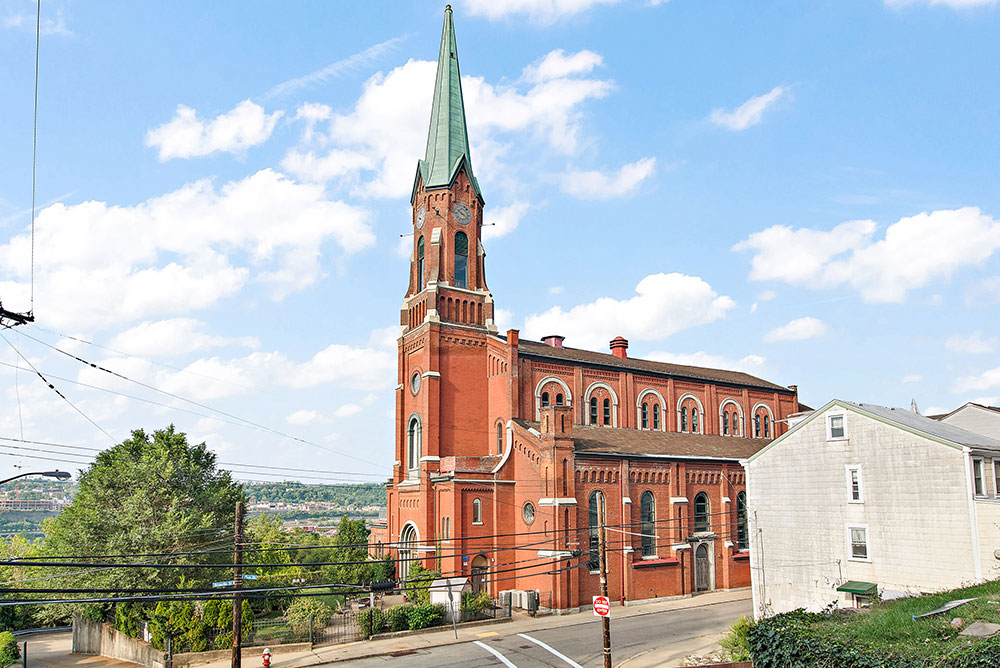 A love of interesting architecture led Kurt Wallnau and his wife, Kai Wei, to purchasing Unit C7 in the Angel’s Arms development on the South Side Slopes. Located in the former St. Michael the Archangel Church, the one-of-a-kind residences at 1 Pius St. offer breathtaking views of the city.

“We look for things that are off, different or unusual,” Wallnau says. “Our agent suggested we take a look at this place, and we fell in love with this one.” 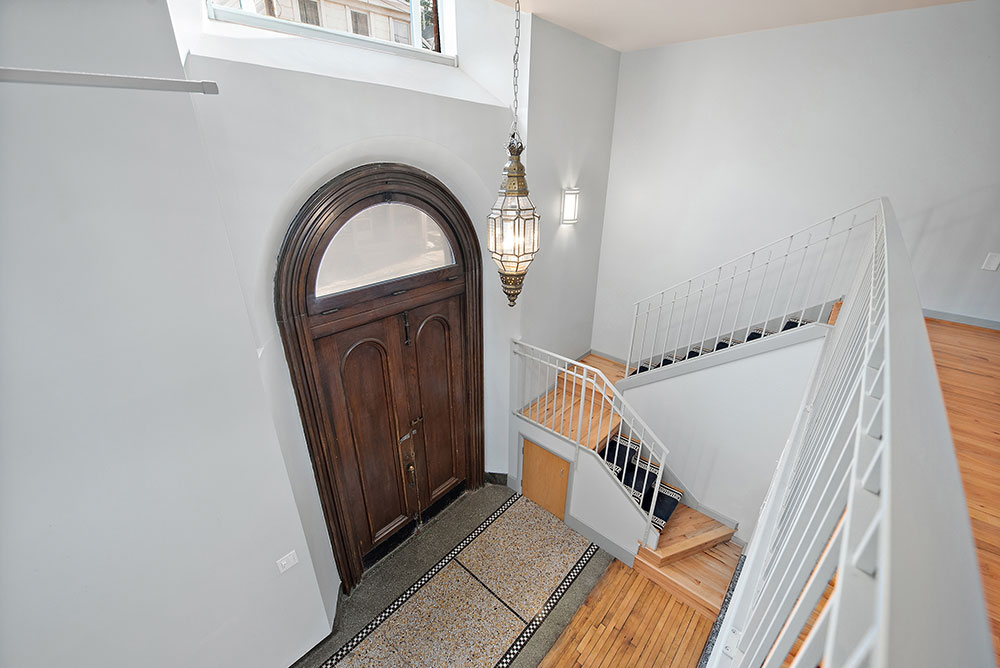 The couple says they only decided to sell their unit after finding another house that bowled them both over.

“It is very much in the style of Frank Lloyd Wright,” Wallnau says.

And while they are settling into the new digs, the couple still loves bragging about the old, which Wallnau says had a nice vibe to it. 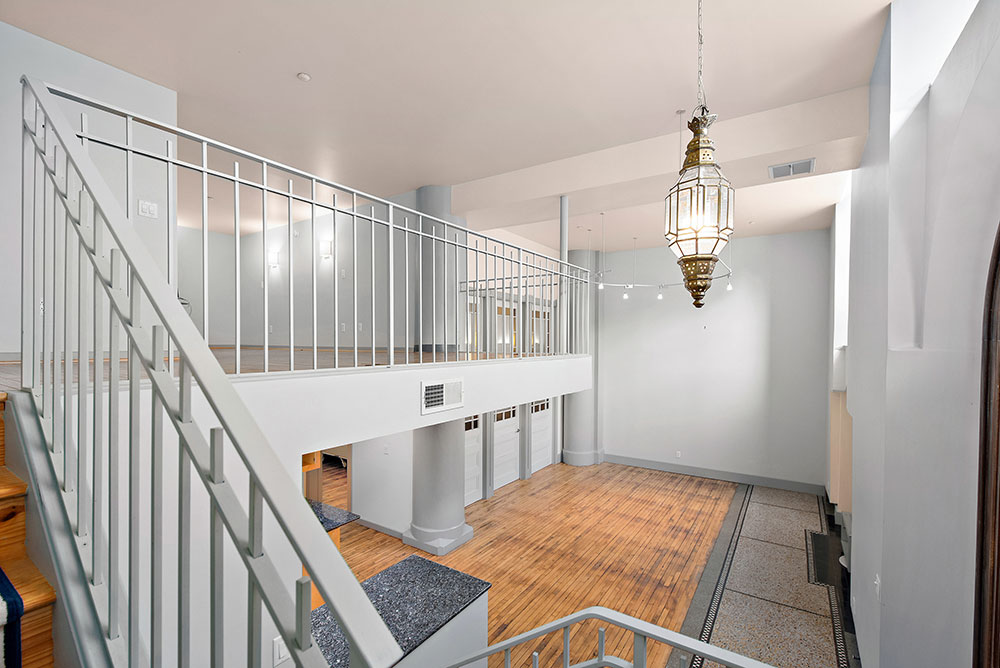 That could be because the unit is located in the former church’s baptistry. When you enter the grand doors, an interesting layout and high ceilings draw you in, as does a large brass pendant that visually defines the entry. A staircase to the left brings you to the loft.

In the kitchen, there’s a nice island peninsula. The glass-fronted cabinets are aesthetically pleasing, with appliances hidden from direct sight. The stone countertops and warm woods make for a nice color palette. 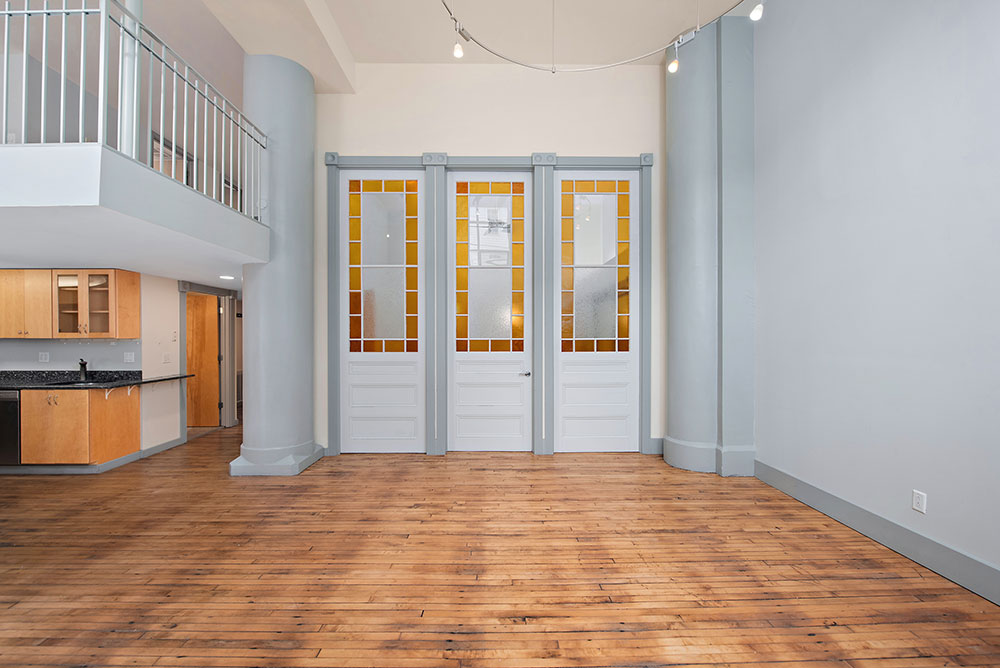 The living area is anchored by a set of three large doors with stained, wavy glass that tower around 13 feet high. The dramatic feature plays nicely off an alcove that perfectly houses a media center. Just above it, a large window fills the space with interesting sky views, bringing light into the space. 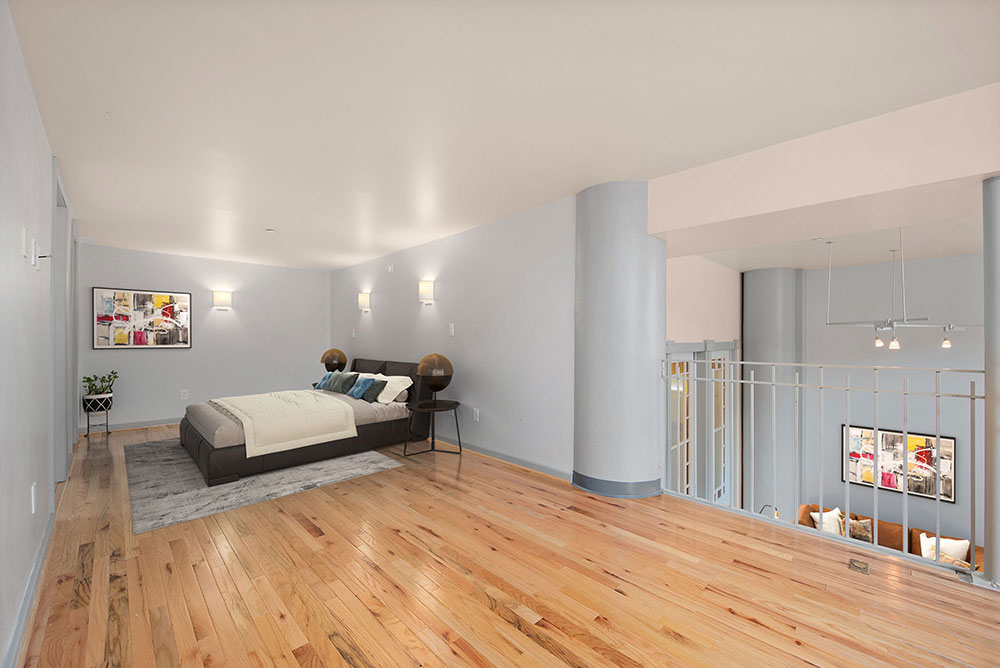 Behind the doors is a bedroom with soft gray walls, light sconces and a pair of roomy closets. A side door opens to the main hallway, which leads to the full bathroom and a utility room with laundry.

The floors have their own living history.

“They are original maple. They have dark stripes where the original pews were,” Wallnau says. “It’s very organic and alive.”

The stairs leading to the loft are complemented by a modern railing. A runner with a Greek Key detail adds interest.

The loft is a nice suite with a bedroom, closet and full bathroom that includes a walk-in shower and a glass vessel sink. If desired, there is room for a bed and an office area. 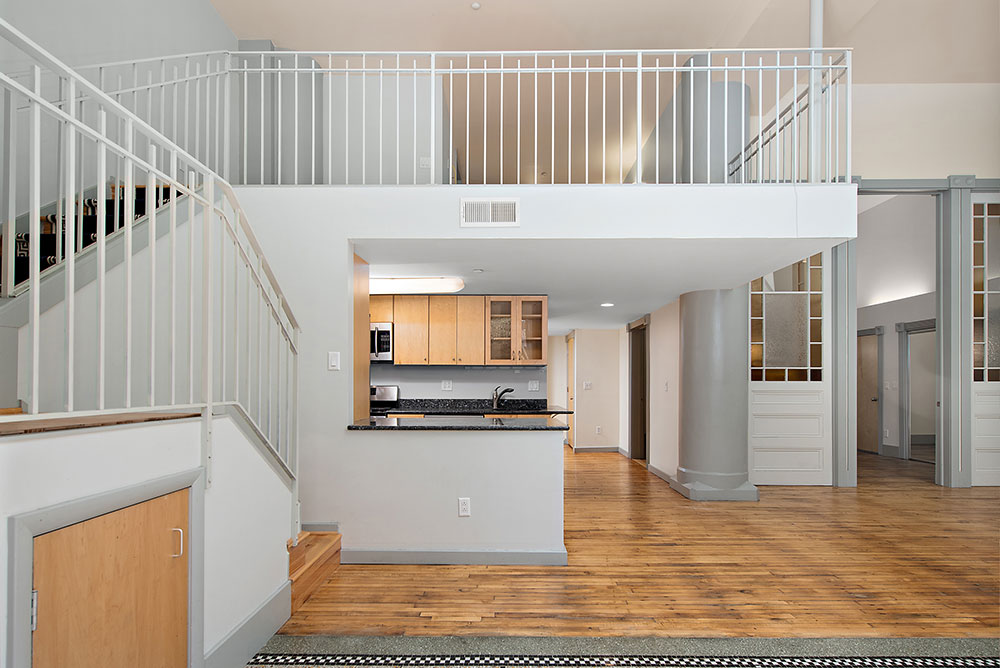 The couple found the space very suitable for entertaining. Wei notes they often held gatherings for 20 to 30 people in the condo and once even hosted a wedding.

“We had a tent for outside for the courtyard and used our unit,” she says. “The wedding took place upstairs. The airiness of the place is so nice.”

The couple also found their guests loved the convenience of the location, especially because they could easily explore the neighborhood amenities on their own.

“When my parents visited, they liked to hike and discovered the River Walking Trail,” Wei says of the public trail that runs along the Monongahela Riverfront. “They found it and took us there.”

Wallnau adds the unit is different from every other place in Pittsburgh they considered calling home.

“If you are feeling something when you walk in, it’s because it is alive with history,” he says.

About: South Side Slopes (southsideslopes.org)
Population: 5,000
Planes, Trains & Automobiles: Public transit via Port Authority. Street parking. Rideshare.
Schools: City of Pittsburgh, features extensive magnet programming, including CAPA in the heart of Downtown. (pghschools.org).
Neighborhood: Known for winding streets and breathtaking views, the neighborhood was one of the first settled along the Monongahela River by John Ormsby. As river industries moved in, immigrants settled in small houses built on the Slopes. Early wooden staircases were built for residents to traverse to and from work. These gave way to the concrete public staircases that Pittsburgh is known for.

Sorry, But It's Time to Say Goodbye to These 4 Design Trends