At the Carnegie Science Center’s new, permanent exhibition, “Mars: The Next Giant Leap,” guests learn how we could be heading to the red planet sooner than you’d think. 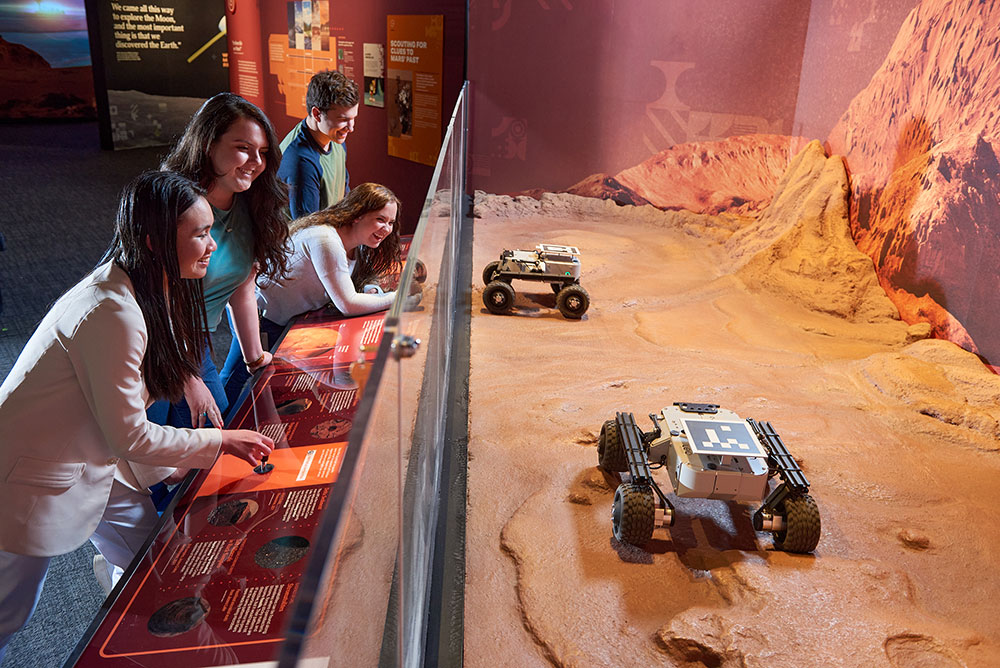 At a new permanent exhibition inside the Carnegie Science Center, guests can explore what our lives might look like on Mars — from conquering the harsh terrain of the red planet to considering what societies humans would build on a Martian colony.

Though the exhibit nods to science fiction, the focus here is on fact — and, guests will learn, such trips could be reality within the lifetimes of the Science Center’s young visitors.

“Mars: The Next Giant Leap” opens to museum members on Nov. 18 and to the general public Nov. 19. It’s the largest — and most ambitious — new, permanent installation since the Science Center opened, according to Jason Brown, the Henry Buhl, Jr., Director of Carnegie Science Center. Brown also told guests at a ribbon-cutting ceremony Thursday that the Science Center focused on making the exhibit “timely, interactive and inclusive.”

Some of those interactive elements are thrilling, including the opportunity to remotely pilot a small model of a Mars rover in search of signs of long-gone life on the dusty planet. In the center of the room, a sprawling model of a theoretical Martian colony demonstrates how human settlement will look; interactive panels invite guests to vote on important decisions for the future of the colony.

Another interactive exhibit demonstrates climate development and cosmic change on both Earth and Mars. It’s a gripping demonstration but also a reflection of bigger questions posed by the exhibit: How can extraterrestrial development of other planets benefit people on Earth? Should we be trying to conquer other worlds while problems persist on this one?

Such philosophical angles weave through the 7,400-square-foot exhibition, which replaces the former RoboWorld exhibit. In a release, Brown said those questions came from interviews with members of the Science Center’s key demographic.

“Guidance from local students helped us realize that what makes space exploration relevant to our community is ultimately the same set of issues as those we face on Earth today.”

Elsewhere in the exhibit, a dramatic series of artist’s renderings and real-life photographs shows how humans have imagined and seen Mars, from the 19th century — when futurists wrote of a large, seafaring population on the planet — to crystal-clear images from contemporary missions.

An exuberant welcome from Mayor Ed Gainey preceded the ribbon cutting, as the mayor marveled at the advancements seen during his lifetime. “I wish when I was younger that this would’ve been here for me,” he said. “Sometimes, I feel like I’m living in Star Wars!”

“Mars: The Next Giant Leap” is included with regular admission to the Carnegie Science Center. The official grand opening lasts throughout the day on Saturday; a free teen night in the new exhibit is scheduled for Wednesday, Nov. 30.