Take a Sneak Peek at Our 2018 Ultimate House

Tours of Empire on Liberty, a one-time furniture and carpet warehouse in Bloomfield turned into a mixed-use structure, take place this month. The tour includes a look at the penthouse and two condos. 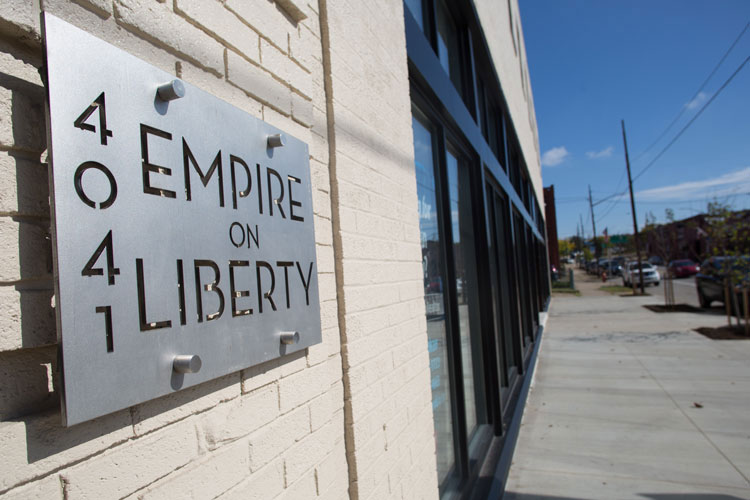 It’s a rare thing in Pittsburgh that an elevator door opens directly into a home, but that’s just one of the perks of living in the penthouse at Empire on Liberty, a 42,000-square-foot, mixed-use structure in Bloomfield featuring housing, retail and office space.

While you typically will need a private code to take the elevator to the top condo, anyone can view the 3,000-square-foot penthouse and two other condos as part of Pittsburgh Magazine’s fourth annual Ultimate House.

Pittsburgh Magazine partnered with RDC Design-Build, Inc. for this year’s project, which is located in the former Empire Furniture Co. on Liberty Avenue. It later served time as the Roth Carpet Warehouse and Showroom.

Tours take place April 13-22. Tickets are $20 each and, as in previous years, all proceeds benefit The Free Care Fund at Children’s Hospital of Pittsburgh of UPMC. Since 2015, Ultimate Houses has raised about a quarter of a million dollars for the hospital through sponsor donations and tour ticket sales. 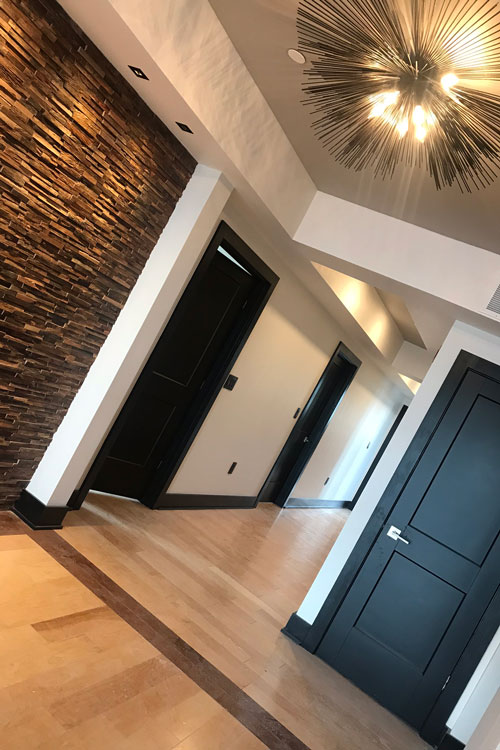 Upon entering the penthouse, visitors will be greeted by a 3-D wall panel made out of reclaimed wood. Overhead is a dramatic starburst chandelier.

The expansive open floor plan, outfitted entirely by Weisshouse in Shadyside, features a series of oversized windows that boast different views of Pittsburgh, including a glimpse of Downtown’s skyline and, further off, the Cathedral of Learning.

An original exposed brick wall runs the length of the industrial-chic penthouse. Running across the 13-foot-high ceilings are the building’s original pipes and sprinklers. 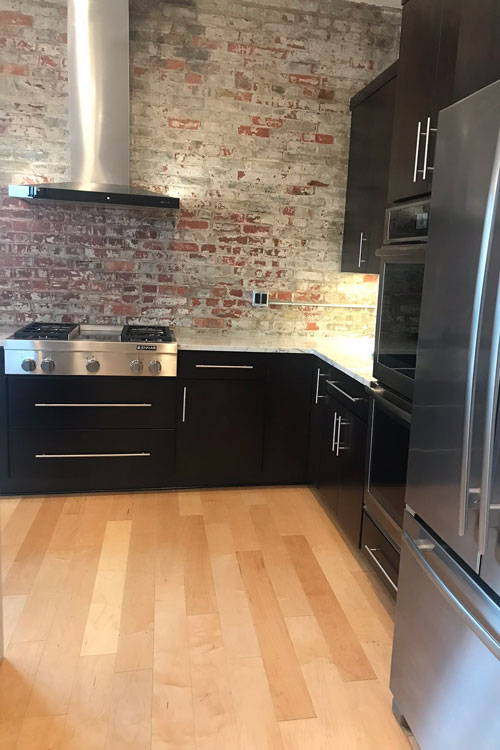 The luxurious kitchen, with cherry cabinets by Manor House, is centered around an impressive white quartzite island countertop from Armina Stone. The 10-foot-long, 5-foot-wide single piece of stone is so big it had to be delivered into the fourth floor penthouse by crane. 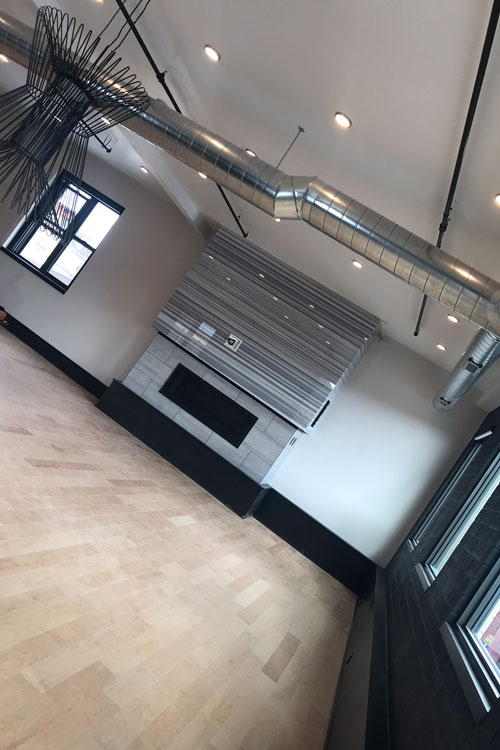 Armina also provided the 8-foot-wide, 1,300-pound slab of marble that makes up the fireplace in the main living area. There are no faux logs in this glamorous gas fire feature; the flames flicker on glittery “black diamond” glass. 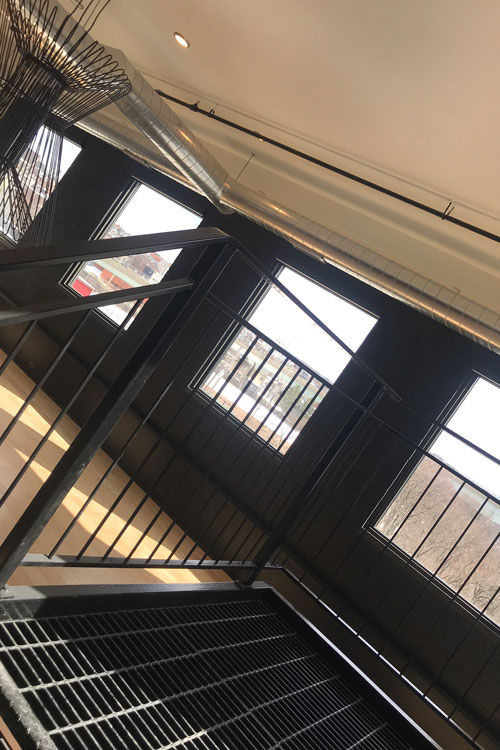 The penthouse’s trendy light floors are a natural maple from Rusmur Floors. Zottola Fab Metal Fabrication Specialists built the custom steel staircase leading out to the penthouse’s 700-square-foot private deck. Stained a sleek black, the wooden deck by 84 Lumber has clear railing spindles to make the most of the city views. 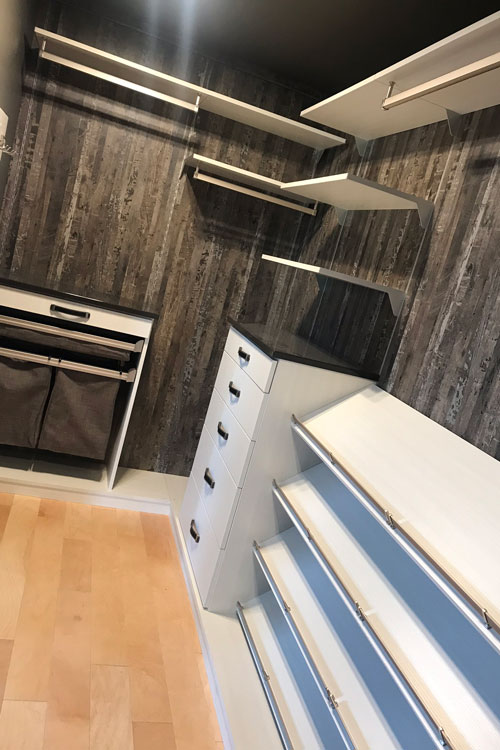 The master bedroom in the $1.05 million penthouse has a custom-built closet entered through a pair of sliding barn doors. So as not to detract from any views, the moveable, lighted mirrors in the master bathroom slide across a track into different positions.

Part of the Empire

Visitors also will be able to tour two, two-bedroom condos located on the third floor of the four-story building. Ethan Allen outfitted and styled one of the apartments; the other was done by IKEA. Both condos share a common outdoor space.

The tour also includes a look at the building’s first floor commercial space, staged by Tri-State Office Furniture. Fort Pitt Piano Company will have a Steinway playing in the “Event Lounge,” with furnishings by Event Source.

Get your tickets to tour our 2018 Ultimate House here.

This article appears in the April 2018 issue of Nest.
Categories: Nest, Ultimate House