Table Brick Oven & Bar, a dining discovery with locations in Murrysville and Canonsburg, brightens the ’burbs with a cool, jazzy space, down-home cooking and a menu with a sense of humor (“Yinzer Salad,” anyone?).

Table Brick Oven & Bar is like a great gift wrapped in plain, brown paper—the strip-mall exterior that contains this dining discovery may be undistinguished, but unwrap this present, and there’s a delightful surprise inside. You’ll find a cool interior, a lively bar and a menu that definitely will give you a few laughs (n‘at). “Yinzer Salad,” anyone? How about “Twinkiemissoù” for dessert?

Table is easily found along Route 22 at one end of the Walnut Hollow shopping center in Murrysville with Atria’s Restaurant & Tavern at the opposite side. Drive time in suburban reckoning is about 15 minutes from Monroeville Mall.

But city-centered diners need not be wary about venturing out into the hinterlands. Table’s menu begins with assurances to those fearful of suburban dining: “The ’burbs doesn’t have to mean mediocre dining and drinking. We’re not out-of-the-box, drive-through, cookie-cutter, flair-wearing, gift-card pushing, one-drink-maximum microwavers.”

Instead, Table is a friendly restaurant with its own identity, serving large portions of homemade, down-to-earth contemporary American food. Although open for only a year, Table is fast becoming a Murrysville favorite—already half-full by 5:30 p.m. on weeknights and packed on the weekends.

As you walk from the parking lot and glance at Hallmark, Supercuts and other retail staples, you’ll be astonished as you enter into Table’s highly designed interior. It features royal-blue, red, black and gold walls, a black ceiling with exposed pipes, sizable pieces of contemporary art, a large, square centerpiece bar with high-definition televisions and a floor-to-ceiling brick oven, the exterior of which is colorfully lit so the brick surface glows red, yellow and green. 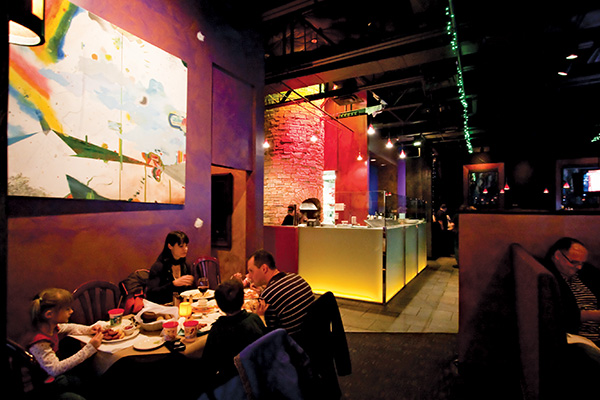 Extremely friendly servers will offer you a choice of a table or a cushy private booth. Or, if you’re in a more gregarious frame of mind, you can snag a seat at the bar, which is usually noisy and crowded, and join with people talking, laughing and watching sports on the large TVs.

Like its ambience, Table’s menu is broad and accessible. The food is straightforward—not fancy—and has the something-for-everyone feeling that you often find at a chain restaurant.

As you start to read the menu, you might find yourself grinning. Take the “Yinzer Salad” ($11), for example. It features marinated chicken breast, grated provolone cheese, French fries and ranch dressing, and promises “protracted conversation about the ’76 Steelers.” Lest you think what you’ll find here is all sports and fries, however, look for a large number of seafood, pasta and vegetarian dishes, which includes an eggplant option pledging that “nothing in this dish ever had a face.”

Start with the house chopped side-salad ($4 or $2 with entrée), which comprises fresh assorted greens, chopped cucumbers, jícama, tomatoes and garbanzo beans. It’s lightly tossed with balsamic vinaigrette and presented on whole, crispy romaine leaves. Skip the spinach and goat-cheese salad ($4.50 or $2.50 with entrée), whose components—a huge pile of spinach, sliced red onions, several whole slices of pancetta bacon, a tiny fried goat-cheese medallion and too much dressing —are out of proportion to each other.

Wings come with four choices of seasonings: Buffalo, chipotle, sweet honey pepper and mild ranch. The buffalo wings are respectable and make for solid bar food to go with the wide selection of draft and bottled beer available.

The brick oven is used to cook many things, including an engaging assortment of “Phatbreads” ($8), rectangular-shaped flatbreads that are large enough to share. There are two standouts: “Chipotle BBQ Bird,” which offers a slightly sweet, crispy crust topped with spicy chipotle barbecue sauce, marinated chicken breast and sweet onions, and “Lawnboy,” which is topped with mozzarella cheese, tomato slices, a generous quantity of prosciutto and arugula tossed with balsamic vinaigrette.

The most popular entrée is the delicious, tender “Pork Shank Redemption” ($17), a large fall-off-the-bone braised pork shank with a sweet bourbon glaze served with garlic smashed potatoes and a vegetable medley. Another good choice is “Charleston Shrimp and Grits” ($19), six grilled jumbo shrimp over a mound of very buttery grits with a complement of green peppers and onions and a garnish of pancetta crumbles. A portion of the sales for the shrimp and grits goes toward improving Canonsburg Lake, a small lake that is a stone’s throw from Table’s Canonsburg location.

The filet mignon ($28) was worth the price, delivering a generous 8-ounce cut of meat, cooked as ordered, and served with potato gratin and a vegetable medley.

Two entrées were unfortunately forgettable: Spaghetti and meatballs ($12) came with overcooked capellini (why not spaghetti?), homemade marinara sauce and homemade—but bland—meatballs. Maryland crab cakes ($21), flat and boring, weren’t helped by a rémoulade that was too thick. 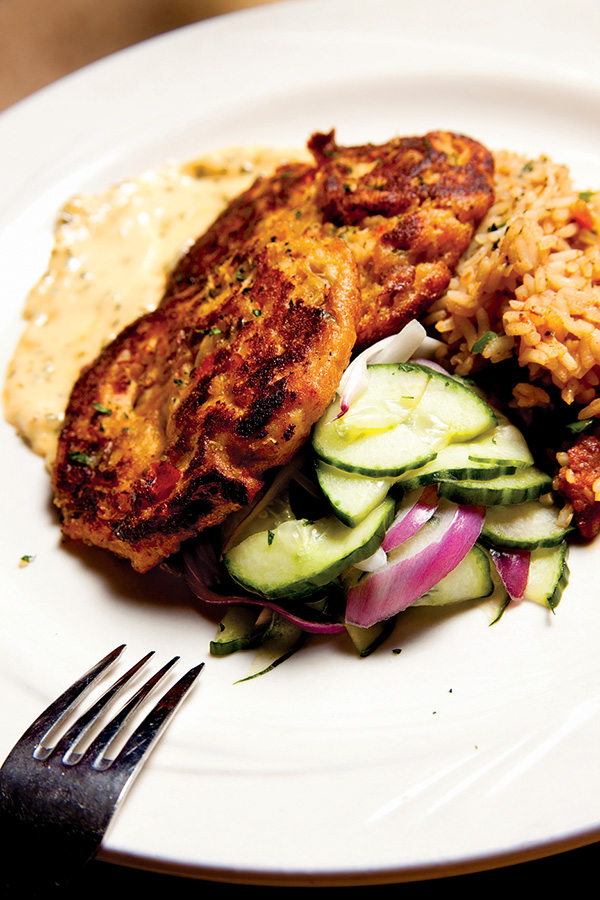 Table offers two sets of desserts, homemade and selections from “Sweet Street.” Skip the “Sweet Street” desserts—they look and taste like the desserts available at chain restaurants. Instead, try the kid-friendly “Nucular Cookies”($6.50)—two homemade Toll House cookies baked fast and hot in the brick oven at 600 degrees and then topped with ice cream, whipped cream and chocolate and caramel sauces.

For a really offbeat dessert, try the “Twinkiemissoù” ($6), a tiramisù made from—you guessed it—Hostess Twinkies. The server was so enthusiastic about this treat that she gave it to us for free just to make sure we tried it (yes, this is a friendly place).  Regrettably, no amount of reddin’ up could make me like a Twinkie; but if you are a Twinkie-lover, this creation may be for you.

Table offers all sorts of promotions and special events:  Monday is “Martini Monday” with $6 martinis all day and also is “Maternal Monday,” when a kid eats for free when Mom purchases an entrée. Tuesdays and Thursdays feature live music. “Winey Wednesday” offers all wines at $5 per glass. Beer lovers get $2 drafts on Thursday nights. The drink menu is extensive, with mixed drinks, drafts, bottled beers and wines; although, bottled wines are without vintage years.

Who’s behind Table? For starters, the menu reminded me of the unique humor on the menu at Harris Grill in Shadyside. It turns out that Pittsburgh-based Steel Plate Hospitality Group, owner of Harris Grill, was a consultant on the interior design, menu planning and management of Table when it opened last year.

The current owners of Table are Rod Grettler and Kevin Adamek. They’ve teamed up with general manager Sean Bucalo and chef Earl Vanderhoof, who together supervise the food and operations of Table in Murrysville, which they nicknamed “Table 22,” and its identical-twin-sister restaurant in Canonsburg, which is nicknamed “Table Lakeside.”  These two Table restaurants were formerly Bruschetta’s, the suburban expansions of the sadly now-defunct Bruschetta’s on Carson Street in the South Side.

Josh McClenathan, the executive chef of the Murrysville Table, is proud of having risen through the ranks, starting as a dishwasher at Bruschetta’s in 2001 and methodically learning his way through the kitchen, eventually becoming executive chef in October 2009. “Familiar dishes with unique twists” is how McClenathan describes the food, and he’s enjoying the restaurant’s increasing popularity as it becomes discovered.

What kind of people might you see at Table? The bar is packed with 30- to 50-somethings having a good time while watching the Penguins or Steelers. The dining area is filled with people celebrating birthdays, families with kids, young couples on dates and older couples enjoying dinner out.

Table Brick Oven & Bar is not necessarily the place for the highbrow or the delicate.  It’s down-home Pittsburgh—a bit of the ’Burgh in the ’burbs.

This article appears in the May 2010 issue of Pittsburgh Magazine.
Categories: Restaurant Reviews