Stories of Our Neighbors: A Good Ride

Filmmaker Frank Caloiero talks about life behind the camera, Rick Sebak, the quest for perfect pie, Tamburitzan families, pandemic Tae Bo — and the escalator incident that became an urban legend. 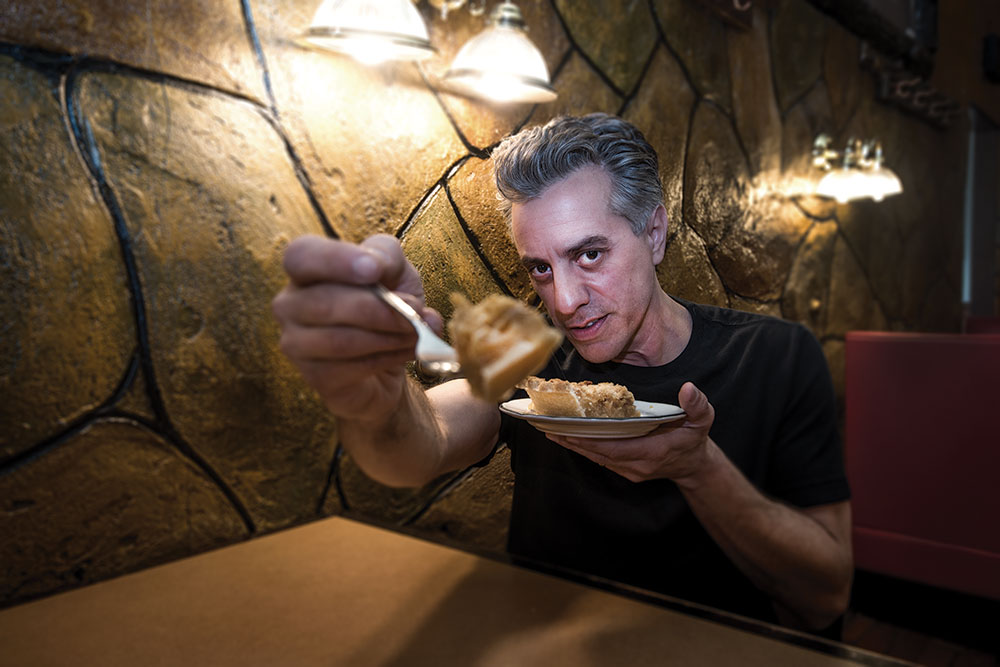 If you grew up shopping in Monroeville Mall, the setting for George Romero’s “Dawn of the Dead,” you probably were warned. One time, a kid lost a toe on this escalator.

Frank Caloiero was that kid.

For the past 27 years, Caloiero has been a producer and camera man for WQED Multimedia, where he works with legendary documentarian Rick Sebak.

Before that, Caloiero received a dance scholarship to Duquesne University, where he studied media arts. Caloiero danced, sang and played music in the Tamburitzans, the acclaimed ethnic music/dance ensemble. He danced his way into the heart of his wife, Amy, a fellow Tamburitzan. They live in Ross with their children — Nino, 20, and twins Sofia and Sam, 19 — as well as three chickens, two cats, and Zero, a Black Lab mix.

Sofia and Sam are Tamburitzans, too.

“There’s a saying,” Caloiero says. “Tamburitzans grow up to marry Tamburitzans and have baby Tamburitzans. You either get married or kill each other. There is no middle ground.”

“Every shoot is a discovery,” Caloiero says of his work on PBS documentaries with Sebak. “I’m so interested in what people are saying or doing. It’s such a gift to get to hear people’s stories.”

He balances his rich home life and time spent roaming with Sebak with teaching film classes at Pitt. Through it all, Caloiero doesn’t miss a step.

My dad was the shoemaker in Monroeville Mall. You can see his shop, John’s Shoe Repair, in “Dawn of the Dead.” As a kid I would see them filming. There’d be hundreds of people getting into zombie makeup.

I spent a lot of time at the mall. There was a candy store downstairs. One day, I asked my dad if I could go to the candy store. He said no. So of course I went.

I was on the escalator going down when I felt something on my leg. I looked and my entire leg was spinning all the way around. I had Converse tennis shoes on, with that little piece of rubber on the front end. The piece of rubber was loose, and it got caught.

A manager saw what happened. He had a key to turn the escalator off. This was before those automatic stop buttons you see now. So luckily, he stopped it. A stranger picked me up and carried me to the information desk. Most of the people working in the mall knew who I was, so they called my dad. I was upset and crying. I thought I was going to get in trouble. Once I realized I wasn’t in trouble, I didn’t feel anything. I must have been in shock.

I was 8. It took me almost a year to learn how to walk again. It wasn’t just that my toe was severed. The whole bottom of my foot was mangled. So it was a long recovery. But I ran track. I got a dance scholarship and performed. I’m still very athletic and balanced. During the lockdown, my daughter Sofia and I have been doing live Tae Bo classes with Billy Blanks. If you watch his recorded videos, you can hear him yelling at me. “Is that all you got, Franco?”

When something traumatic happens early in life, you just adapt and move on. I have a hard time even remembering how old I am. I think I’m still 19.

I got interested in filmmaking in high school. A friend’s dad had a film camera. We’d film ourselves fighting – baseball bats, swords, our version of “Rambo” with flaming bows and arrows. There was no editing involved, just carnage.

Naming a favorite show would be like saying I have a favorite child. But I’ll talk about the pie show, a national show we did around five years ago.

There’s no shortage of good places to get a pie in this country. Rick and I traveled everywhere, eating pie multiple times a day, every day. How can you not love that? We were in the wee boonies of Alaska, up in Wisconsin. One day we drove literally nine or 10 hours out of our way on the Upper Peninsula to taste a piece of pie to see if maybe we could use it in the show. For every pie story we used, there were maybe four other places where we sampled pie. That Upper Peninsula pie — we liked it, but we didn’t use it in the show.

People would send us home with pies. Some days, we’d be having breakfast in the hotel lobby and Rick would pull out a pie, cut it into pieces, and go up to random strangers at seven in the morning and say, “Would you like a piece of pie?” Sometimes they’d look at him like he was crazy, but who doesn’t want a nice piece of fresh fruit pie in the morning?

Rick is great at letting people talk about their process, and process as a subject works so well on television — where you can see something evolve or see how something is made or even the process of history. I think one of the reasons Rick’s shows are so successful is he doesn’t go in with cue cards or a list of 12 questions. He lets people talk. He’s smiling, curious, whimsical. He’s naturally excited about and interested in what they have to say.

I teach advanced editing and digital cinematography classes at Pitt. Sometimes I bring my students to talk with Rick. One bit of advice he gives is: Remind yourself that whatever energy you give out when you talk to somebody, you will get that energy mirrored back.

Camera people, we’re behind-the-scenes kind of people. We like to hear what other people are doing and how they’re doing it. I’m not shy, but I don’t have a desire to be on camera. But as far as being behind the camera, being able to travel and meet people, it’s been amazing. Every day is a new discovery. I try not to talk about it too much because I don’t want to sound like I’m bragging, but this life? It’s been a fun ride for sure.

Caloiero’s most recent project for WQED, “Harbor from the Holocaust,” a documentary about the nearly 18,000 Jews who found refuge in Shanghai, China, during World War II, is directed by Violet Du Feng, with Caloiero and Jason Lee Wong as directors of photography. PBS members can watch it, along with Rick Sebak’s documentaries — including “A Few Good Pie Places” — on PBS.org. The videos are also available for purchase on iTunes and Amazon.

This article appears in the June 2021 issue of Pittsburgh Magazine.
Categories: From the Magazine, Hot Reads, Stories of Our Neighbors