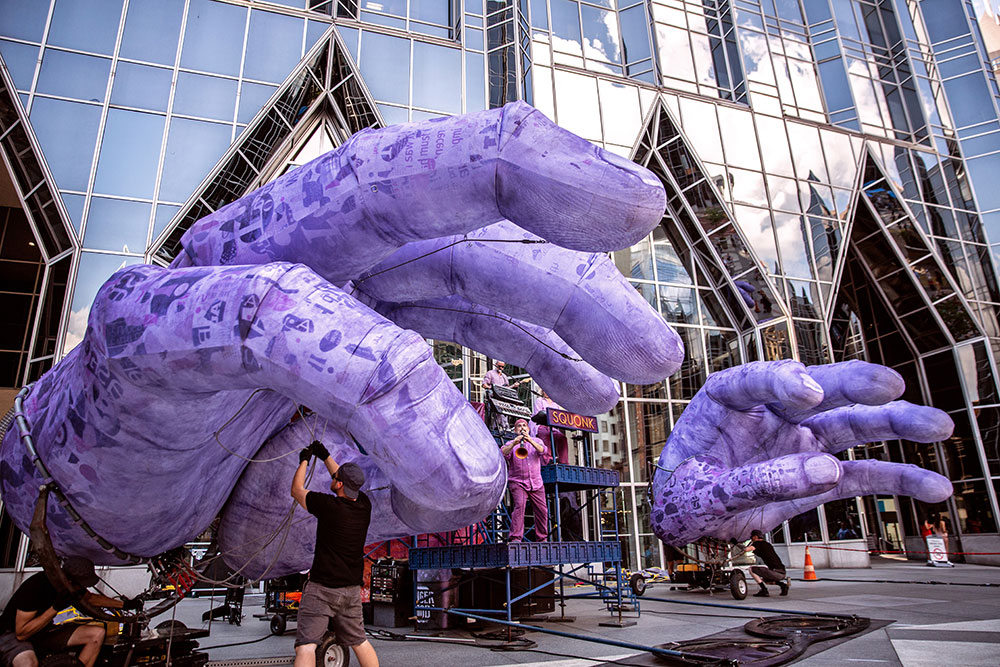 If you happen to come across two gigantic purple hands roaming the area, do not be alarmed — it’s part of a performance by Squonk Opera.

The vivacious theater group is celebrating its 30th anniversary by embarking on a cross-country tour showcasing its most recent creation, titled “Hand to Hand.” This show sports two, 25-foot puppet hands strategically choreographed to match unique musical compositions. During the show, five musicians will play a wide range of instruments — including keys, bass, guitars, drums and woodwinds — while four handlers skillfully maneuver the hands. 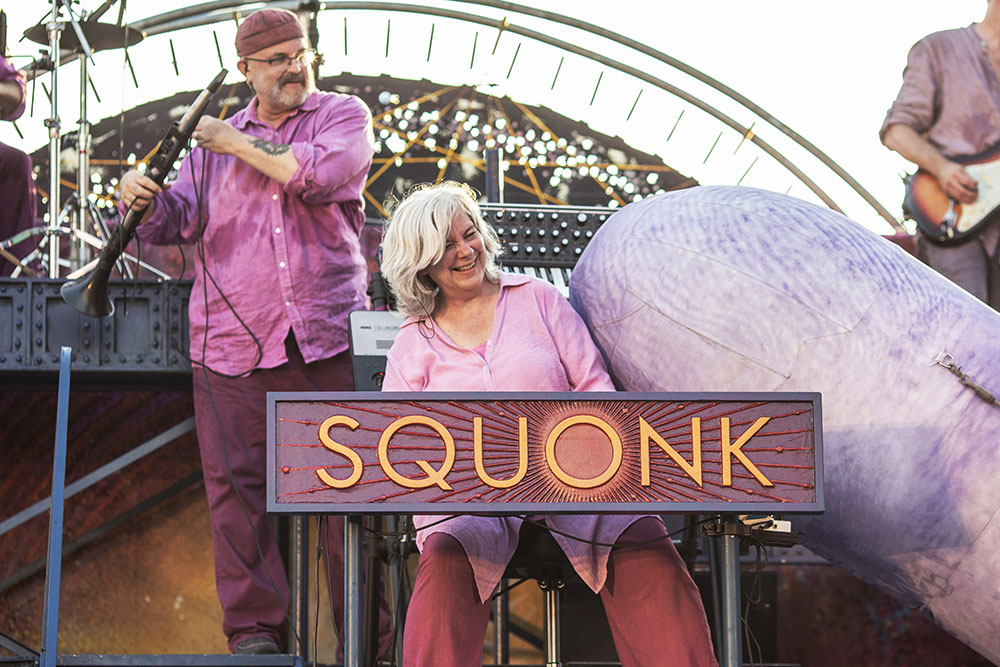 Ultimately, the group’s eccentricity is what draws audiences to Squonk’s shows (squonk.org). Each show takes around two years to create, blending music with art to produce a wild spectacle.

“We’re essentially making theater from visual and musical art rather than theater from a plot or storyline,” says Steve O’Hearn, one of Squonk’s artistic directors.

From the group’s first show in a junkyard, full of screeching machines and calculated crane movements, to its newer adventures with massive inflatables and oversized bicycles, Squonk has proven that art can evolve from anything.

“We love trying to think of new challenges with each show,” says O’Hearn. “The world and science and nature and art all are constantly giving us things that we want to try.” 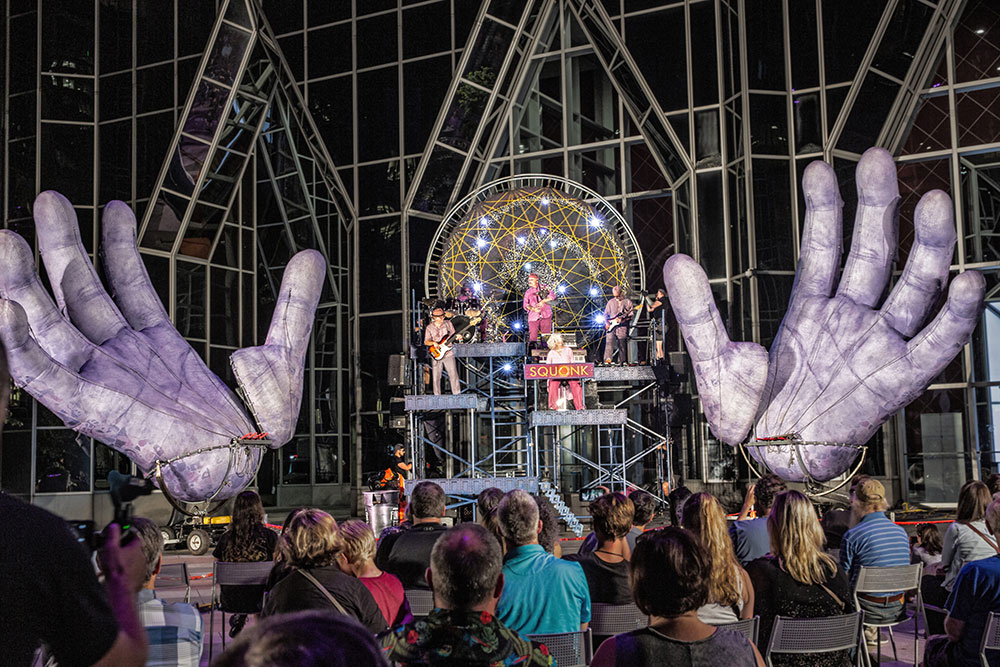 O’Hearn and composer Jackie Dempsey have for nearly 30 years used their immense imaginations to create shows that capture audiences’ attention. In 2016, Squonk released its “Cycle Sonic” show, a homage to massive, human-powered bikes that doubled as a working stage for musicians and their instruments. Another recent success was “Pneumatica,” which used gigantic inflatable tentacles and huge wind turbines to show the public the beauty of air.

There are consistent obstacles along the way. Since performances are held outside, the weather is always a question. Additionally, it takes about 3 or 4 hours to set up the visual art pieces, so construction must go off without a hitch.

Nonetheless, O’Hearn reiterates how rewarding the entire process is.

Squonk’s dedication to unifying people has been a cornerstone of the organization since its inception in 1992. The group’s tours have spanned from the U.S. to Asia and Europe, and they all aim to bring people together through art and music. It has also made appearances on and off Broadway, and performed its most recent show at both the Kennedy Center and Lincoln Center.

Through all of its successes, O’Hearn wants to stress that Squonk is always grateful to the Pittsburgh community — of course the city of massive bridges produced a group of creators that build monumental pieces of art.

“When we’re on tour, we never hide the fact that we’re from Pittsburgh,” says O’Hearn. 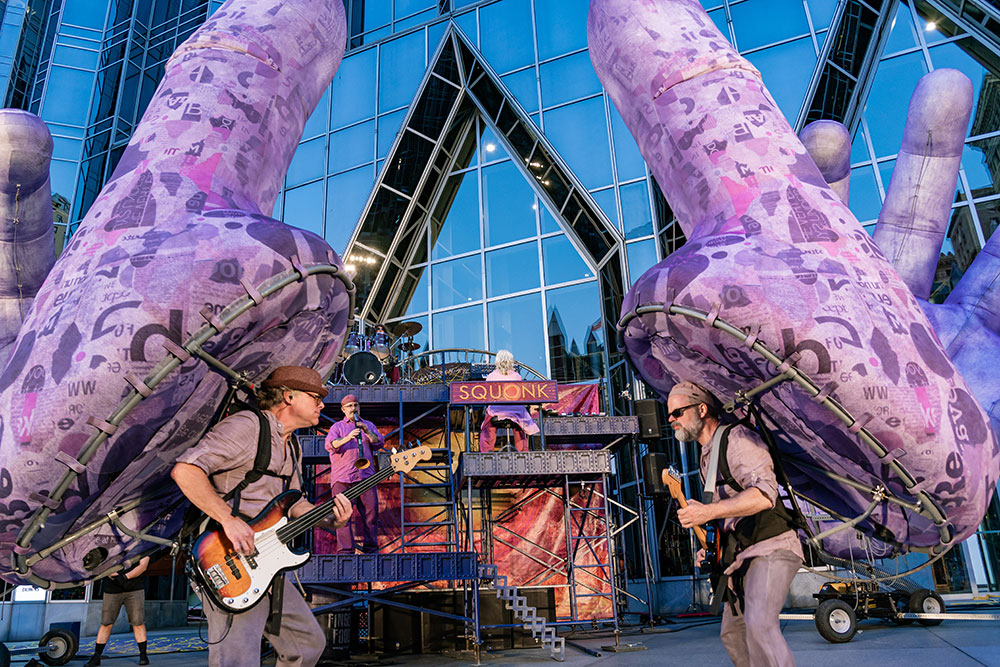 “There’s something inherent in the kind of self-deprecating humor and the hard work building of things that comes from being Pittsburghers that we embrace and is simply part of our identity.”

Aside from its national tour, these creatives are also engrossed in their “Squonk in the Neighborhood” series, which consists of various performances throughout Pittsburgh communities. After spring performances in Hazelwood for Earth Day and Oakland in May, “Hand to Hand” will continue its local tour at the Independence Day Festival at Point State Park.

The inspiration for “Squonk in the Neighborhood” stems from the company’s previous work in schools. For about 10 years, Squonk has partnered with various schools to perform and teach students about the fascinating ways science, music and art can blend together. When the coronavirus pandemic halted those up-close-and-personal performances, the solution was to bring its performances to Pittsburgh communities.

Also in hopes of reconnecting with Pittsburgh youth, Squonk recently began partnering with the Boys & Girls Club of Western Pennsylvania to host workshops where kids can learn what goes on behind the scenes of performances. 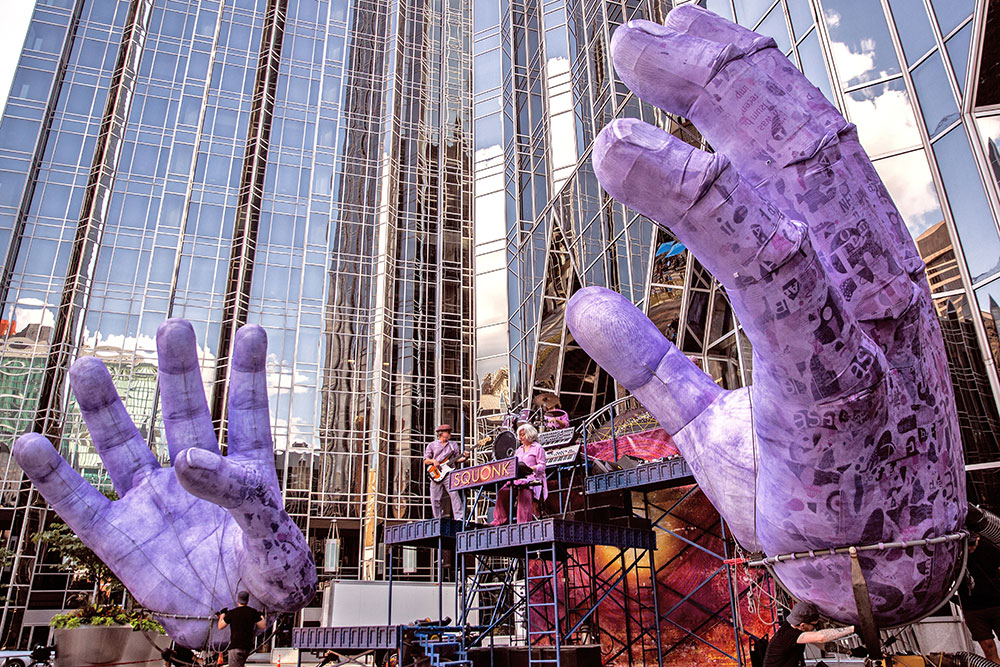 It seems Squonk currently has its large hands full with multiple projects, but oddly enough, O’Hearn credits the pandemic for some of its popularity. Squonk was able to continue with its performances because its “theater” is always a large, outdoor space.

“Now we’re busier than we ever have been,” says O’Hearn.

By catering each show to the outdoors, Squonk was able to remain relevant, while also providing audiences with an unconventional artistic experience. Following the various closures caused by the pandemic within the art community, O’Hearn notes how refreshing it is to be able to create and present art again.

“Especially in post-COVID,” he says, “to be in a vigorous setting like that is just absolutely lovely.”

This article appears in the July 2022 issue of Pittsburgh Magazine.
Categories: Arts & Entertainment

He Lives in Exile in Pittsburgh – For His Writings About Cuba