Spotlight On Art: It’s A Starry Night in Pittsburgh

The Immersive Van Gogh exhibit combines the work of the artist with filmmaking and experiential art for a new concept that has traveled the world. 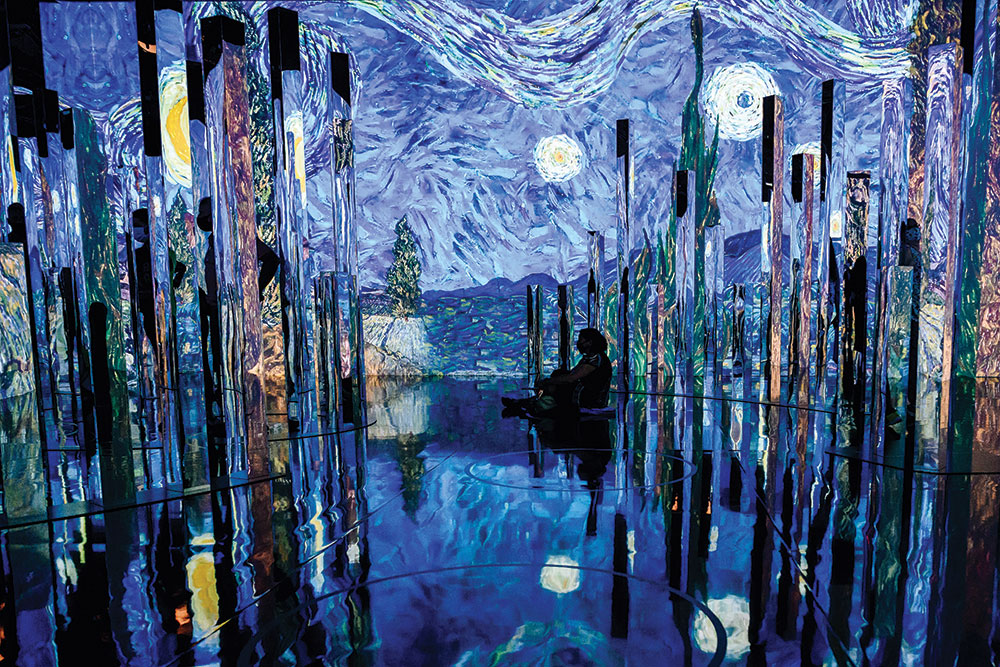 What flashed before Vincent Van Gogh’s eyes in the moments before he died?

Perhaps a collection of his works, pieced together, morphing into one another, a tapestry of color and life. Such was the vision of artist Massimiliano Siccardi, who created Immersive Van Gogh, a touring art exhibit that opens Sept. 23 in Pittsburgh.

Immersive Van Gogh is more than just large projections of famous works, says producer Corey Ross. The exhibit, which is presented by Canadian company Lighthouse Immersive, is an altogether different genre of art.

“[Visitors] should be ready for a whole new way of encountering art,” he says. “It mixes art exhibiting, because we see Van Gogh’s art pieces, with filmmaking, because technically … it’s an animated film that’s projected on every surface in the building, with experiential [elements].”

The experiential piece acts as a sort of “choose your own adventure,” as people decide how they want to experience the show; they can move from room to room in any order they please, stay as long as they like in any particular place, sit on a bench or the floor or observe the show from above on a balcony.

Ross says most people know Van Gogh’s major pieces — “The Starry Night,” his Sunflowers series — but seeing them animated and surrounding you is not the same as seeing a painting on the wall.

“What becomes interesting is not to see the pieces but see how they’re recreated into this immersive world,” he says.

While the show boasts 400 images of Van Gogh’s work (he painted nearly 900 pieces in all), it’s not a strict display of one piece after another.

“It’s not like you’re coming to see an omnibus of Van Gogh’s art,” Ross says. “It’s not like we’re trying to create a one-stop place to stop you from going to all of the museums with Van Gogh’s art around the world. … Massimiliano deconstructs them and animates them and reconstructs them. One piece morphs into another, transforms into another. … It’s an emotional journey.”

Ross refers to Italian film producer Siccardi as the “Steven Spielberg of immersive art.” He’s been constructing immersive exhibitions in Europe for 30 years and designed Immersive Van Gogh to premiere with Lighthouse in 2019. Van Gogh was one of the first artists Siccardi was exposed to as a child; Van Gogh lends himself to this type of experience more than other artists, Ross says.

“He himself was innovative and high-tech,” he says, noting Van Gogh was able to go out into landscapes and paint because paint in a tube (rather than mixed in a shop) had just been invented; Van Gogh’s use of color and his method of impasto painting, where paint is laid on so thickly that you can see the brush strokes, was also new.

The show also comes with its own soundtrack, created by Italian multimedia composer Luca Longobardi.

“People come out of the show and love it and want to know how they can listen to it, so we put it on Spotify,” Ross says.

The show premiered in Toronto, where it sold out its run, and shows in subsequent cities have sold out or been extended; Pittsburgh’s show is currently set to run through November. The show will have appeared in 20 cities by the end of 2021.

Ross notes each show is unique because the architecture of the building it’s displayed in is incorporated into the show.

The location for the show is typically a mystery to ticket holders until about five weeks before the opening (and has not been announced as of press time). Ross says finding a space in each city is a huge task because they need to have so much space for the works, but in Pittsburgh there were “lots of great buildings” that could have lent themselves to the idea.

With more than 2.5 million visitors so far and more celebrities and artists beginning to take note of the form, Ross says they expect immersive exhibitions to become commonplace.

“We know the concept is popular,” Ross says. “We’re just starting to see interest from artists in America who are blown away by what we’re doing. I’m really intrigued to see how artists who are established here in North America begin to see this type of immersive show and approach to storytelling. I think once the genie’s out of the bottle there’s going to be so much interesting stuff going on here.”

This article appears in the Sept. 2021 issue of Pittsburgh Magazine.
Categories: Arts & Entertainment, Things To Do