Chad and Lauren Townsend are ramping up production so more Pittsburghers can share in their frozen goodness. 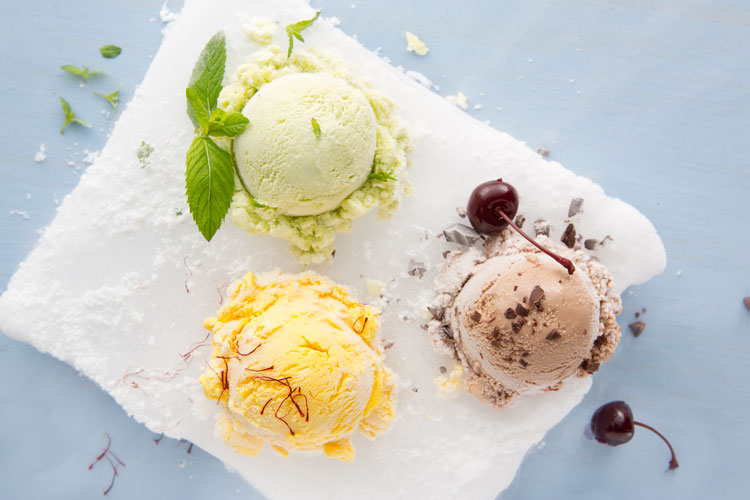 When Chad Townsend left his post as executive chef of Salt of the Earth last July, he started making and selling ice cream as a way to keep himself busy until his next restaurant venture. That ice cream — something he’d made for years both as a hobby and for an occasional special at Salt — was a hit. Ice-cream maker hours also are a lot friendlier than chef’s hours, which meant that he was able to spend more time with his wife, Lauren. In fact, it quickly became a two-person operation, and eventually Lauren left her job as investment professional at Incline Equity Partners so that the couple could open a business, which they named Millie’s Homemade Ice Cream in honor of Townsend’s grandmother. 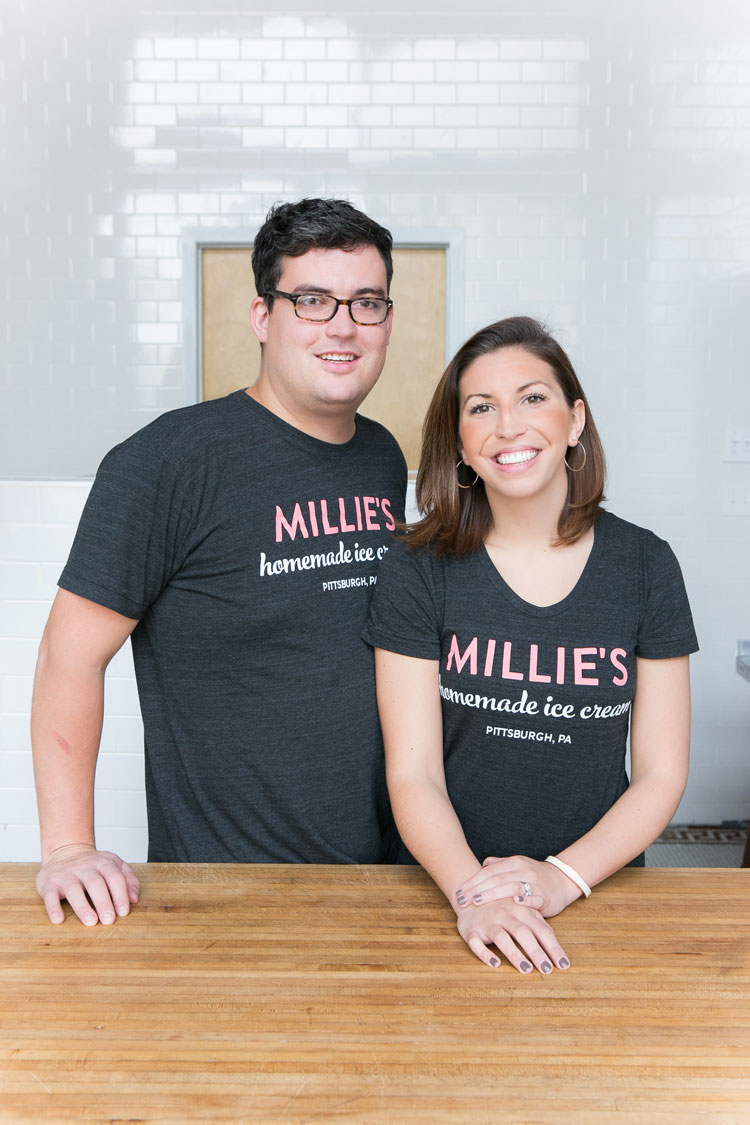 The Townsends spent the last 10 months slowly growing Millie’s. They offered an ice cream CSA (Community Supported Agriculture) last winter to 50 people and vended at special events and markets around town. The ice cream, all made in small batches in their house, quickly developed a reputation for its consistency and quality.

Now, Millie’s is set to move its operation to a 1,200-square-foot production facility in Homewood.

“I’ll be able to produce a lot of ice cream,” Townsend says. 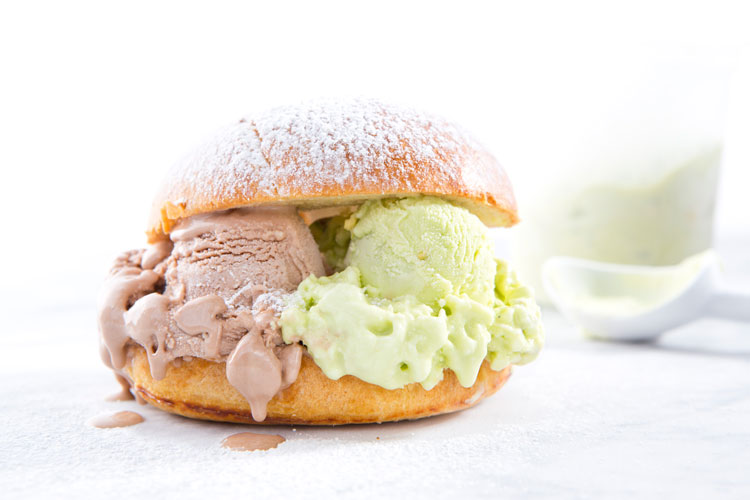 He expects delivery of a pasteurizer — funded in part by a successful Kickstarter campaign — this week, which will allow Millie’s to produce ice cream on a commercial scale while at the same time maintaining the creativity and quality of their homemade product.

“This allows us to add things beyond the scope of the pasteurized milk ordinance,” Townsend says.

The vast majority of ice cream manufacturers use packaged, pre-pasteurized mixes, which means they can add only certain pre-approved items (nuts, dry ingredients including cocoa powder) to the base. Because Townsend will do his own pasteurizing, he’ll have more control over what he’s making. 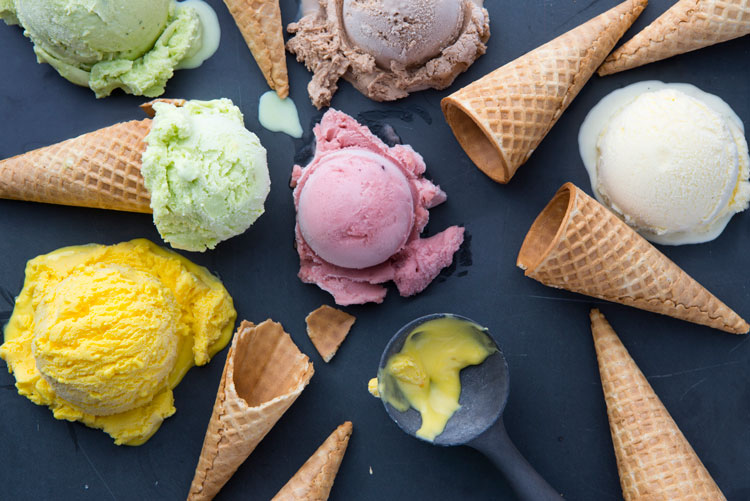 Even armed with all of that ice-cream science, Millie’s Homemade is at its core a straightforward product. Townsend starts with meticulously sourced milk, cream and eggs.

“You can taste the difference when you start with good quality milk,” he says.

Aside from products such as vanilla and sugar, which are impossible to source locally, he’s looking as close to home as possible for flavorful ingredients. He’s also exploring different mediums for the best possible flavors. A base of dried apricots (which he likes better than fresh) is more flavorful as a full-fat ice cream, while the flavor and texture of rhubarb are more delightful as sorbet.

Millie’s ice cream flavors are seasonal, so while the strawberry sheep’s milk was so tasty that I bought cups in two locations on the same day, enjoying them was a fleeting moment because strawberry season now is waning. That’s fine; raspberries and blueberries are right around the corner, and I’m sure Townsend will make something wonderful from them, too. 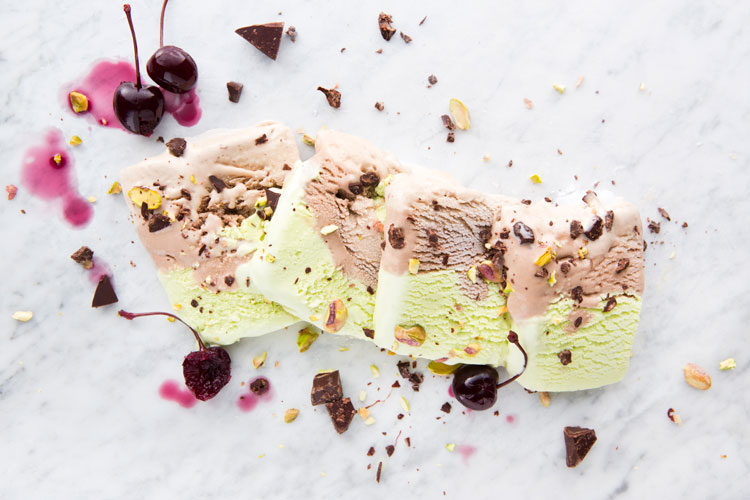 The Townsends plan on opening an ice-cream shop in Highland Park next March. In the meantime, there are quite a few ways to get your hands on their ice cream: On June 19, they’ll open up enrollment in their summer ice cream CSA. For $75 you’ll get two pints of ice cream delivered to your door every other week over the course of eight weeks. Deliveries are scheduled for Tuesday and Thursday nights and Sunday mornings. If you’re not going to be home at your scheduled time, you can arrange, at a small additional cost, for the pints to be delivered with dry ice.

The Townsends also set up shop every Saturday at Farmers@Firehouse in the Strip from 8 a.m. to 1 p.m. and “as many Saturdays we can” in front of Tazza d’Oro in Highland Park from 2-7 p.m.; plus they go to the Wednesday farmers market in Mt. Lebanon. You’ll soon also find their ice cream in the freezer case at the East End Co-op and served at select big Burrito restaurants.