This new restaurant in Garfield challenges our traditional ideas about food and fine dining.

Tired of the tried-and-true? Eager to explore some unfamiliar territory and leave the usual notions of restaurants behind? Then follow the culinary compass to Salt of the Earth, which features dishes that are limited in number but are complex and fascinating, making this Garfield location a magnet for foodies.

Salt of the Earth, which opened in September, is named in honor of the hard-working people of Pittsburgh and uses NaCl, the scientific symbol for table salt, as its logo. The restaurant is the creation of chef Kevin Sousa and architects Doug and Liza Cruze, of The Cruze Architects in the East End, whose concept is to provide an exceptional dining experience, featuring “progressive American food” (although the food, in fact, reveals many influences) in an unpretentious setting.

Sousa is well-known to Pittsburghers. With the exception of cooking for two years in Arizona, Sousa honed his skills here, beginning with his education at the Pennsylvania Institute of Culinary Arts (now Le Cordon Bleu) and cooking at the Duquesne Club, Soba, Kaya and Red Room.

Two of Sousa’s standout performances were his unique offering of alchemy food (dining fare manipulated and even chemically altered in the kitchen to create unusual temperature, flavor and texture combinations) while executive chef at the Bigelow Grille and his more recent work as a consultant to Yo Rita on the South Side, where he elevated the taco offerings to the sublime.

Salt of the Earth was founded on two guiding principles:

First, the restaurant offers a limited number of items (fewer than 10 entrées and a few desserts) in order to execute each at the highest level possible. That means Sousa and his staff put a tremendous amount of thought and planning into each dish, thinking about flavor, texture, aroma, color and overall balance.

Second, Sousa and the Cruzes wanted their restaurant to be totally transparent. That means you can see the food being prepared in a stainless-steel, open kitchen. There are no back rooms or prep kitchens, so servers, hosts, cooks and diners share the same space—a sleek combination of green-tea-colored walls, black steel beams, hanging spotlights and light wood furniture.

Moreover, most of the seating is communal. The main dining area (for which reservations are not available) has three long, wooden tables that can seat about 12 people at each, a small bar that seats six and a kitchen bar that fits eight, together creating a convivial—albeit noisy—environment. Upstairs is a balcony, which is quieter, darker and available for reservation.

Following his belief in working communally, Sousa is quick to credit members of the staff at Salt of the Earth, including general manager Robert Sayre, sous chef Kevin Rubis and lead line cook Jonah Frazier.

Staff and customer harmony succeed, thanks to the food at Salt of the Earth. It’s compelling to observe diners having long conversations with one another and their servers when each dish is delivered and tasted.

The menu, written on a large chalkboard wall, is divided into three sections: Starters, Mains and End. It changes often, so if you want current information, check the restaurant’s website for the daily menu.

Sousa likes to experiment with unusual flavor combinations. For example, the simply named apples selection in Starters ($8) comprises a novel mix of flavors, textures and colors: tart honeycrisp apple chunks, spicy horseradish-cranberry sauce, creamy feta, mild sorrel and crunchy cocoa nibs. The scallops ($13) are an equally delicious Starters option, served with a quinoa salad that’s made of kohlrabi and diced inari and placed on a plate dressed with lemongrass sauce and fresh watercress. Beets ($8) are another superb choice. Look for diced yellow and red beets next to a generous mound of young frisee—all tossed in a divine truffle mustard sauce—and served with a poached egg. 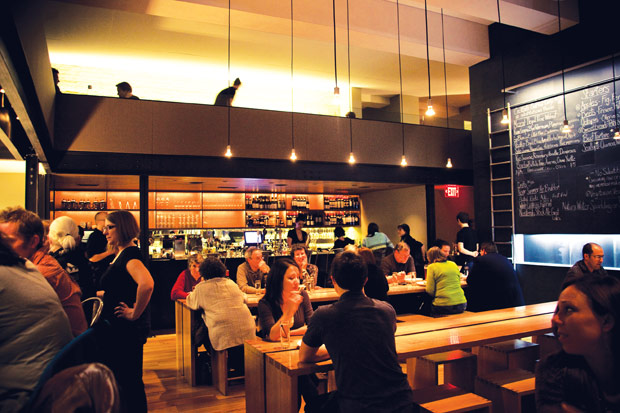 Downstairs, diners eat in a communal setting at one of a few available tables. Upstairs, guests can have more intimate conversations while sitting on the balcony.

The Mains include a few fish and meat entrées and at least two vegetarian or vegan entrées. (If you tell the server that you are a vegetarian or vegan or need a gluten-free or nut-free dish, they will ensure that the information is communicated to the kitchen staff.) I tried the tempeh ($14), which is as close to meat and potatoes as any vegetarian dish I’ve ever tried. Looking and tasting like a good spicy sausage, the tempeh (a fermented soybean product) arrives next to mushrooms, potatoes and gravy.

The most amazing dish has to be the striped bass ($23), an entrée that I’ve thought about again and again since eating it. The bass is a tender, flavorful piece of fish served with enoki mushrooms and crunchy black rice. What makes this dish is the dashi, a Japanese-style broth infused with pine needles, which the server pours on top of the fish.

The End is typically a chocolate dessert and a cheese platter. For the former, I tried the pudding ($8), which comprised bite-sized pieces of heavenly salted-chocolate ganache served with a smear of goji-berry sauce, creamy white homemade coconut sorbet, a citrus foam, toasted hazelnuts and a pile of curried cookie streusel on the side.

The cheese selections ($8) change often. There are two; they were highlighted with quince paste and powdered bacon (which looked like talcum powder), an unexpected reminder of Sousa’s alchemy days.

I’ve heard this gripe from several diners: The cheese plate is not served with bread, crackers or fruit (with the exception of a few sliced grapes as garnish). Although Sousa counters by saying that bread would distract the diner from the flavors of the cheese, it’s hard to eat cheese without something to cut the richness.

The aspiration to create several items done very well carries over to the bar. Fewer than 10 cocktails ($10), each with a different alcohol base like gin or sake are available per night. Like the food, the cocktails are carefully crafted, with homemade bitters and juices. The Boyd & Blair Vodka with Chartreuse liqueur is sweet and pungent with ginger—although not cold enough for my taste.

Sousa credits mixologists Maggie Meskey and Summer Voelker as the creative forces behind this component at Salt of the Earth.

You will find a fairly large (by Salt standards) offering of wines by the glass. I loved the clean, crisp taste of the Fritz Sauvignon Blanc 2009 ($10) and the fruity, mellow Cuvaison Pinot Noir 2007 ($13). Four draught beers ($5) are also available.

Traditional flavors and ingredients are present at Salt of the Earth, but the creations are a cut above. “We cannot be everything to everyone, but we are trying to do the things we do really well,” says Sousa.

This article appears in the January 2011 issue of Pittsburgh Magazine.
Categories: Restaurant Reviews