Saint Ravioli Doles Out Divine Pasta By The Dozen In Bloomfield 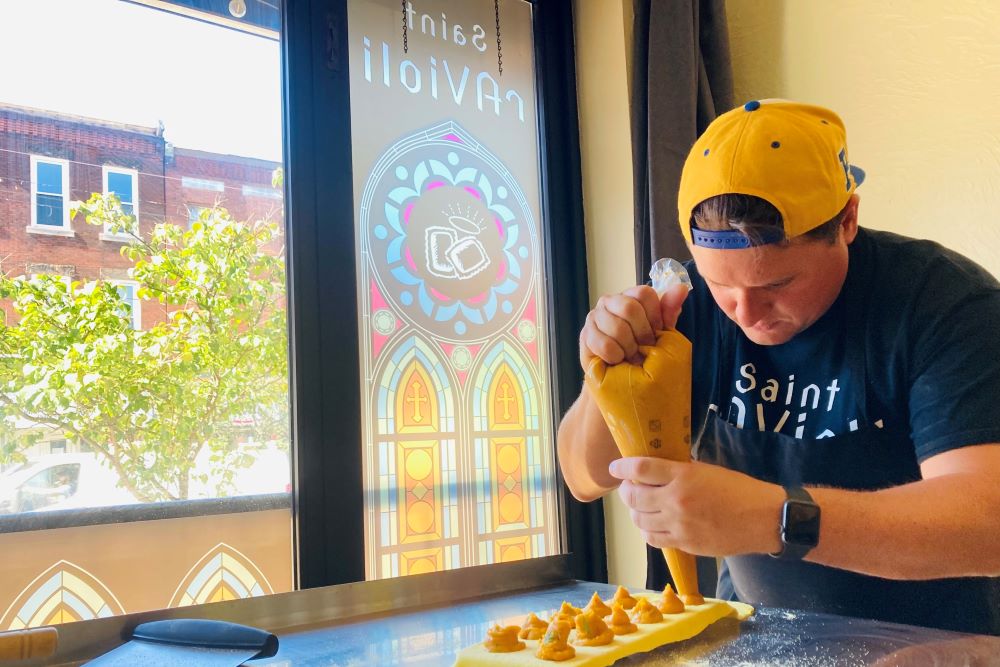 “I was up at 5 a.m. throughout the weekend making marinara and Bolognese sauce,” Avi says. “We had a really nice turnout, especially on Sunday.”

The baptism by fire taught him to up his inventory for next year’s celebration.

If you stroll past 4615 Liberty Ave. you’ll probably see Avi in the window, which is bordered in faux stained glass. He put his ravioli-making equipment front and center to draw attention to the operation. 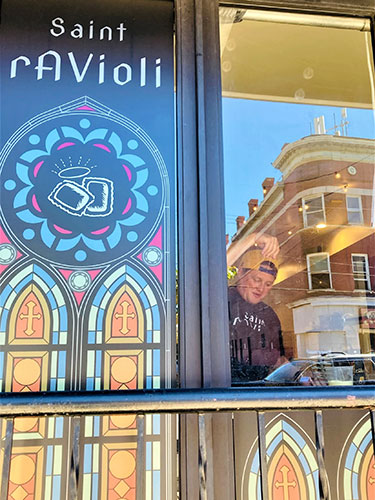 “One lady tapped on the glass like I was a fish,” he says with a laugh.

Avi announces “ravioli drops” on his Instagram page. As of press time, it had upward of 4,400 followers, who he calls “congregates.” Customers can place their online orders, which he will confirm via direct message that includes payment and pickup instructions.

The frozen food is good for about six months. The chef is looking into vacuum-sealed alternatives to his current packaging to extend the shelf life of the product. Avi would love to see his holy handiwork in local grocery stores and eateries someday, complete with custom-designed labels by Kira Moon, a Pittsburgh-based artist whose whimsical work blends pop culture and food.

Although the Bloomfield space — which Avi shares with Pure Greens, a veggie-based health food purveyor — is primarily a production facility for online orders, people are welcome to come in if the open sign is up to see if there’s any frozen ravioli in stock. Avi, a jovial soul, is always happy to chat.

The Bloomfield resident grew up in Kittanning, where his dad ran a neighborhood tavern. His Croatian grandmother would often whip up big pasta dishes to appease the Italian side of the brood.

Avi studied pharmacy and psychology at the University of Pittsburgh, but always dreamed of owning a business.

In college, he worked at various bars and restaurants, including Peter’s Pub, Mercurio’s and Iron Born Pizza. Although he excelled at front-of-the-house hospitality, he longed to be cooking in the kitchen.

Iron Born Founder and Chef Pete Tolman grew up with Avi and remembers the impressive meals the family prepared every holiday season. Seeing his friend (and former employee) thrive in an often fickle industry is like receiving a Christmas gift.

Tolman says when Avi is ready to take on wholesale accounts, he’ll discuss carrying Saint Ravioli products at Iron Born locations in Millvale and the Strip District. In the meantime, he has at least two dozen waiting in his freezer at home. He recommends dropping some cheeseburger ravioli in an air fryer and topping them with pickles for a perfect late-night snack.

Post-graduation, after stints selling insurance and beer, Avi traded one carbohydrate-laden product for another.

In early 2020, he acquired pasta-making attachments to his old KitchenAid mixer and made ravioli using the duck he had harvested during a snowy hunting trip with his dad. He made the bite-sized morsels with a mix of cheese, caramelized onions, mushrooms and poultry and then distributed dozens to family and friends, especially those in the service industry who were struggling through the pandemic.

During a Zoom poker game with friends located throughout the country, somebody jokingly called Avi “Saint Ravioli” and the name stuck. That’s when he decided to take a gamble on launching his own culinary enterprise.

The back of his branded T-shirts read, “I Ain’t No Saint,” but Avi’s got a big heart. He’s donated food and raised funds for local nonprofits, including the Women’s Center & Shelter of Greater Pittsburgh.

Through word of mouth and Avi’s personal Instagram page, the donation-based hobby grew. He started the Saint Ravioli social media pages in November 2020 and expanded his offerings to 47 varieties of ravioli, from Thanksgiving dinner-inspired bites to all-American flavors ranging from Buffalo chicken and apple pie to bacon-cheeseburger. He quit his day job and went full-time on the project in July 2021. 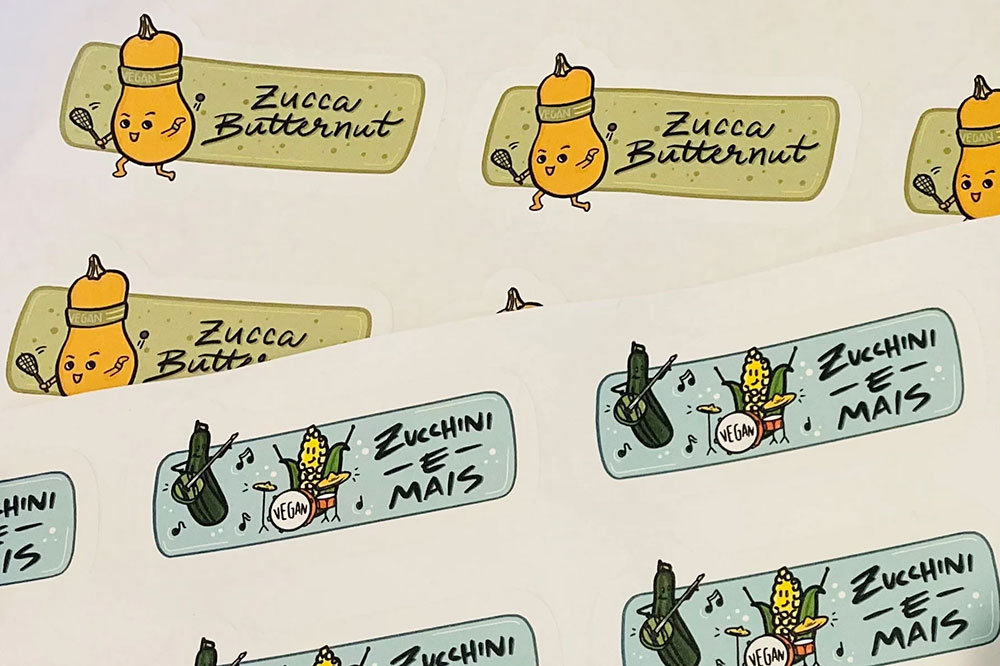 His latest by-the-dozen delights include vegan-friendly noodles filled with either zucchini and corn or butternut squash. Avi hopes to expand into other noodles, such as agnolotti, a smaller ravioli with a fold that’s perfect for holding sauce. He’s also researching the dry pasta market. Fellow Iron Born Pizza alum Chef Ryan Peters has entranced upward of 2.9 million TikTokers with his pasta-making videos.

Avi is gearing up like an anxious groom for a highly anticipated wedding soup ravioli drop.

On Sunday, Sept. 11 at 8 p.m. he will post ordering information to his Instagram story. He tends to sell out fast, but with persistence, and, perhaps, a little divine intervention, you’ll be able to enjoy this heavenly meal.