Rockaway Pizzeria in White Oak Will Expand This Summer 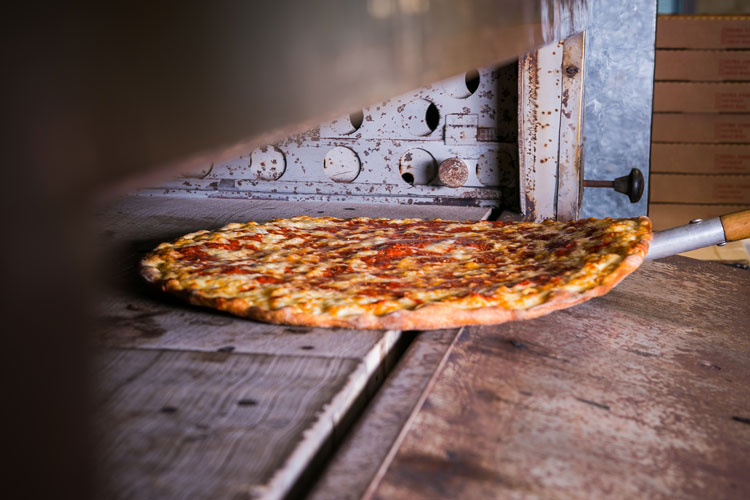 One of my favorite Pittsburgh-area pizza joints is set to expand early this summer. Rockaway Pizzeria, Josh Sickels’ White Oak ode to the great pies of the New York City borough of Queens, will move from its current location by mid-July. “We’re literally moving right next door,” says Sickels.

He’s in the process of finalizing permits to overhaul the interior of a neighboring medical office into a what will become a substantial, dine-in restaurant. “It’s just like sardines in a can here right now,” Sickels says of his 800-square-foot space, which he opened in early 2017.

To that end, his new location will have a significantly bigger kitchen, a second oven and ample storage space, which is something that’s lacking in the current set-up. More importantly, he’ll have seating for somewhere between 40 to 60 people (depending on the final layout). Sickels says he does a robust pick-up operation but that there is high demand for dine-in restaurants in the suburb of White Oak. Opening a sit-down restaurant also is a relief to people like myself, who find themselves eating slices in their car on the way to hauling a pie (or two) that’s worth driving for back to the city.

Look for an expanded menu, which, in addition to the praiseworthy Queens pies, will include Sicilian-style pizza, salads, hoagies and a few classic pizzeria pasta dishes such as baked ziti.

In the meantime, there’s some good news for Pittsburghers who don’t want to drive to White Oak or wait for the new space — starting on May 5, Sickels will have a weekly Sunday residency from 3 p.m. to 8 p.m. at Spring Hill Brewing. He plans on serving slices and pies with limited toppings.

Sickels quietly started making pies there a few weeks ago so that he could adjust the composition of his dough to fit the location. He’s using Bakers Pride P-44 electric oven in Spring Hill; he uses a Bakers Pride Y600 gas oven in White Oak. “I’ve been doing it for my own sake to figure out how the oven works. Electric and gas are a little different, especially in that the electric oven has rods that heat up at the top. That changes the way the pizza bakes, so I have to be mindful of the hydration of my dough,” he says.