Following a menu and interior overhaul in late 2014, Willow returns as a revitalized dining option in the North Hills. 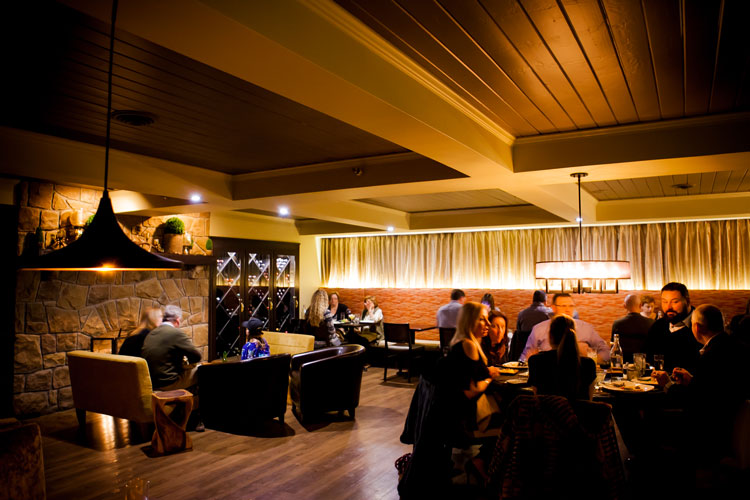 Rick Stern has enough experience in the restaurant business to know when it’s time to fix something that isn’t working. Willow, his 10-year-old restaurant in Ohio Township, wasn’t running to his standards. Late last year, in addition to planning and overseeing a total cosmetic redesign, Stern brought Brian Pekarcik, his business partner in the S+P Restaurant Group (BRGR, Spoon and Grit & Grace), into the mix to reinvigorate the restaurant’s faltering kitchen.

The only dish that remains from the old Willow menu is the crab cakes. Skip those, and explore the new collaboration between Executive Chef John Mottinger and Pekarcik.
On a lunchtime visit to Willow I’d eaten one of the most delightful midday meals I’ve had in my four-plus years in Pittsburgh. Kale salad might seem to be a passé choice, but the mix of shredded kale, pickled red onion, grapes and onions, topped with a nicely cooked chicken breast, was a reminder of why “kale salad” became a synonym for “healthy, must-have lunch” in the first place.

The plate of beets and grains — farro, quinoa, kale, golden beets with a Greek-yogurt-and-cardamom dressing — nearly was as delicious as the kale salad. It’s a deeply satisfying dish that’s nutritious but doesn’t make you feel as if you’re “eating healthy” as a sacrifice.

If a healthy lunch isn’t your thing, and you have the luxury of taking an afternoon nap, go for the French dip sandwich instead. It reminded me more of a brisket sandwich than classic French dip, but that’s a small matter of semantics; call it what you will, this is a very good sandwich. The tender sliced meat was complemented with provolone, onion and giardiniera.

Regarding the giardiniera: Our server came back from the kitchen moments after I ordered to warn me that the mix of pickled vegetables was hot — really hot. This is a small
example of the exemplary service at Willow. Each time I dined there, the servers were knowledgeable, attentive and warm. Other restaurant managers could look to Willow — and also to sister restaurant Spoon — for an example of how to run service. 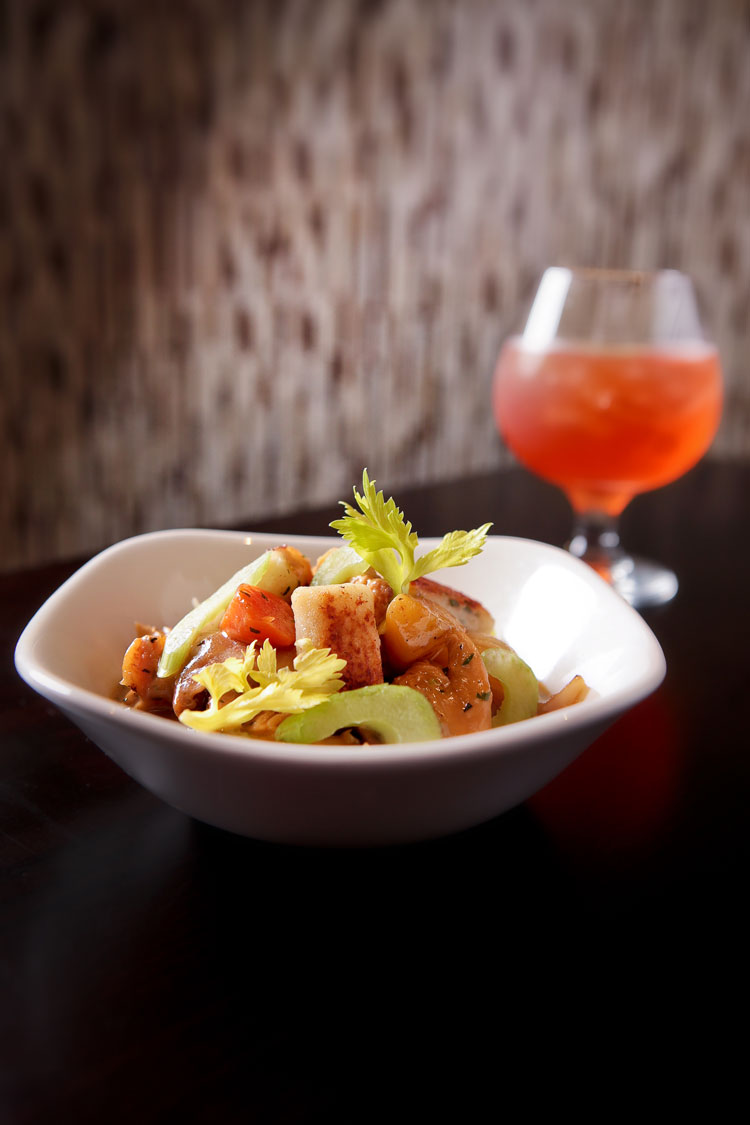 The must-have starter is rabbit & dumpling. Tender pulled rabbit and soft dumplings swim in a flavorful broth, mingling with carrots and celery that are treated with respect and removed before they overcook; cremini mushrooms add earthy depth. I loved the addition of raw celery leaf as an herbaceous garnish. On the second visit, the dish was — and I didn’t think this possible — even better than the first time. I wish the restaurant offered it as a main course.

The roast-pork lettuce wrap is nicely executed, if a little overstuffed. The previously offered margherita flatbread, however, was a disappointment. The bread itself was pliant and flavorful, but I felt absurd eating watery and flavorless sliced tomatoes as I watched the first snow of the year through Willow’s gorgeous picture windows. I wondered why the chefs didn’t stew the tomatoes or table them for the winter and start with a different base.

The once-offered carbonara also disappointed. Pancetta, which should have hardly touched heat, was overcooked to salty meat-rubber — yet the egg, which should add luxurious smoothness, was undercooked, its white still not coagulated. The dish tasted as if it came from a Pasta Roni box kit. 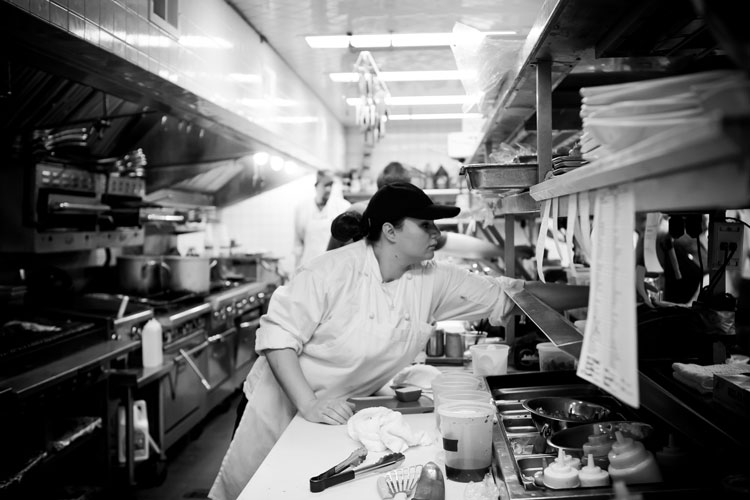 Served medium-rare, with tight, crisp skin and tasting of the sea, the Scottish salmon is a solid main-course selection.

Perfectly cooked agnolotti is a lovely pasta course and a smart choice for vegetarians. It’s complemented with toothy farro, lemony spinach and delicious roasted cubes of squash. I could have done without the goat-cheese clumps, which were a distraction.

I found the inconsistency of Willow’s cocktail program surprising because John Wabeck, general manager of Spoon and one of the most knowledgeable beverage minds in the city, developed the menu for the bar. On one visit, I was served an undrinkable Vieux Carre, and my friend had a pear Vesper — which no longer is on the menu — that reminded her “of what I imagine fruit-scented shampoo would taste like.” I suspect that there soon will be a big improvement in the program because Wabeck is too good a mentor to allow for bad cocktails to be served.

There’s something for everyone on the beer list, but I’d like to see more attention given to Pittsburgh’s many fine regional breweries. Swapping Miller Lite for Penn Pilsner, for example, would be a great way to support the local beer scene while still giving old-school patrons the classic lager taste they’re accustomed to drinking. For the moment, the helpful, instructive and nicely mixed wine list is the star of Willow’s beverage program.

The refreshed Willow should be a regular destination for residents of the North Hills, especially for lunch. It’s also a worthwhile, if occasional, destination for those of us who have to cross a bridge — or even a bridge and a tunnel — to get there. 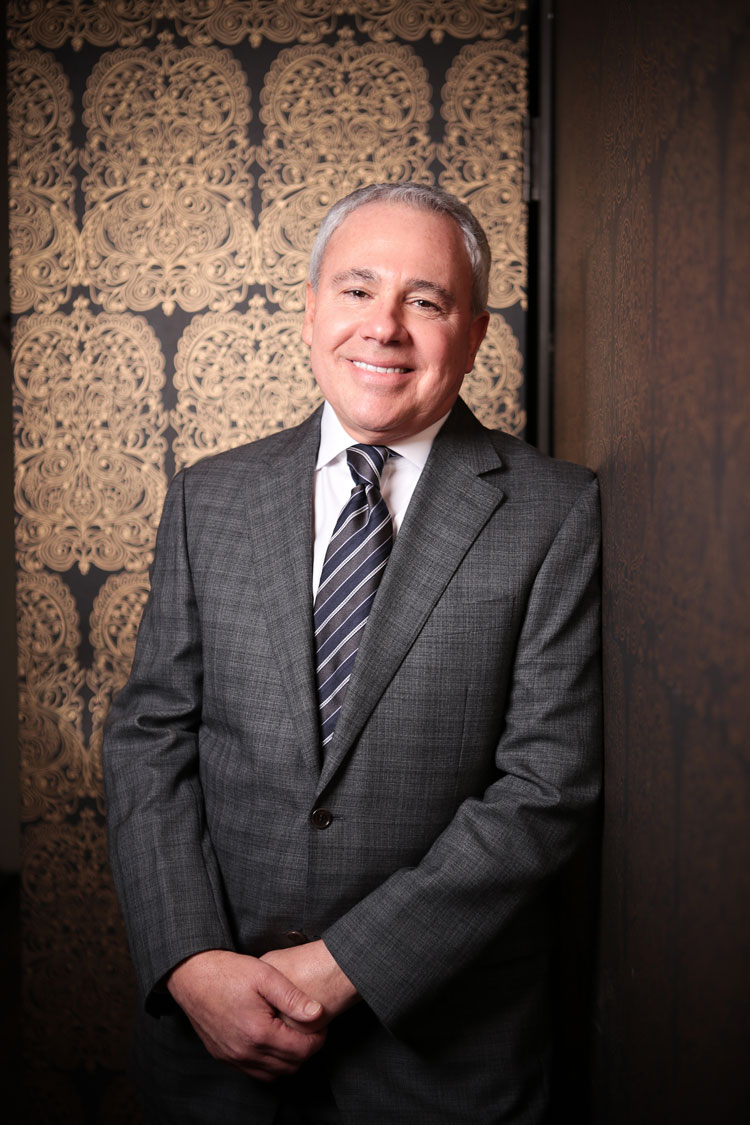 How do you approach design when working on a new or refurbished space?
The first thing I do is [to] try to find the right architect for the project. Once we establish [who] the architect is going to be, we get conceptual design ideas from them. We give our input, and then you collaborate and go back and forth about things we like to see in the space, down to the details [such as] which fixtures to use. It’s a process from there.

What do you see on the horizon for dining in Pittsburgh?
Generally speaking, the food scene here is progressing rapidly. It’s come a long way just since we opened Spoon [in 2010]. It’s impressive to see the amount of terrific chefs and the different types of restaurants they’re opening up. I don’t think it’s going to slow down anytime soon, especially with the influx of people moving downtown and into the Strip. Being a longtime Pittsburgher, it’s great to see.

Where do you see S+P Restaurant Group going next?
It’s been a busy year-plus for us [with the Grit & Grace, Willow and Galleria BRGR openings]. We’re going to take a short breather, but we have some additional concepts we’ve been talking about. It’s a little premature to talk about them, but we are in discussions about some major projects that we want to make happen in the [next] two years.

What are the main differences between running restaurants and running movie theaters [another of Stern’s ventures]?
They’re really different businesses. Movie-theater business for me is second nature, and it’s a little more predictable [though you can never tell if the general public is going to like a specific movie]. Restaurants are a much more creative and detail-oriented business. There’s a lot more that can go wrong, and there’s a lot more follow-through and detail needed each day. It’s a difficult business. [With] the movie theater business, we’re acting as exhibitors. We take someone’s product and put it out for the public. With restaurants, it’s much more of a creation from scratch.

Do you cook?
I fool around a bit at home on the grill. I’m mostly the grill man at the house. I have an outdoor kitchen. I like fooling around out there. My wife is a great cook, so when I’m home, I leave it up to her. When I’m at the restaurants, I leave it up to Brian [Pekarcik] and the other chefs.

This article appears in the February 2015 issue of Pittsburgh Magazine.
Categories: From the Magazine, Hot Reads, Restaurant Reviews