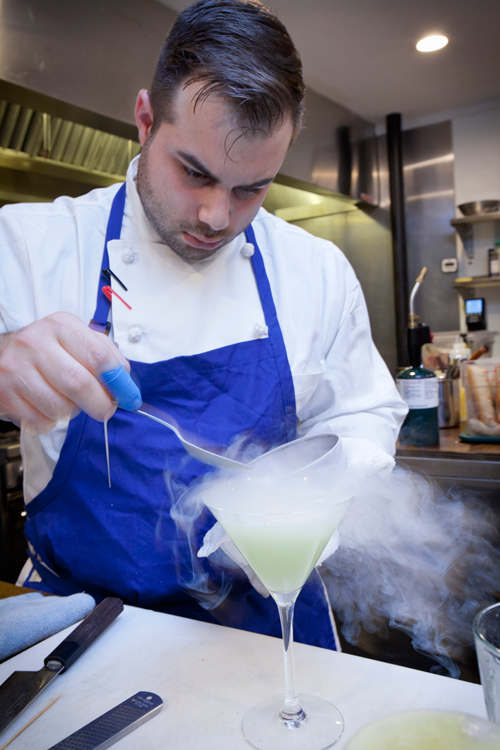 Chef Andrew Garbarino of The Twisted Frenchman has the talent and the drive to become a heavy hitter in Pittsburgh’s culinary community. For the moment, though, dining in his East Liberty restaurant reminds me of watching a blue-chip prospect hustled up from the minor leagues a couple of seasons earlier than he should have been.

Garbarino, 27, graduated from The Culinary Institute of America in 2009 and worked for several years at Spoon and Il Pizzaiolo Mt. Lebanon before opening his 32-seat restaurant in April. He’s also spent time staging in kitchens in Pittsburgh and Los Angeles.

The Twisted Frenchman’s vegetarian dish — billed as a custom off-menu creation that the chef creates according to your preferences — showed both Garbarino’s promise and limitations. On one August visit, I asked for “summer” and “corn” and received a corn succotash with Parisian gnocchi and cherry tomatoes. Although the lovely light pea broth was an odd off-season complement to the dish, the corn was sweet buttery summertime, bolstered by deeply concentrated tomato sunshine. It was terrific. 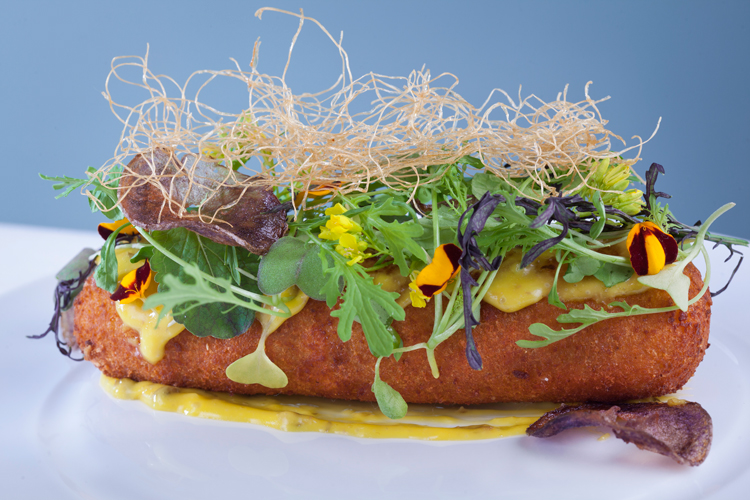 Ten days later, I asked a friend to order something “summery.” His dish also had a base of French gnocchi but with a generous portion of truffles and onions. Unfortunately it was mixed with way too many mealy peas for a hot August night — good, but not summer. I also was hoping Garbarino would pivot to create something completely different than my vegetarian special, but he didn’t. Still, this is the only part of the menu with even a hint of seasonality.

Garbarino demonstrates serious skill with some of his dishes, including appetizers. Nicely cooked beets crawl into a beautiful “ants-on-a-log” plating with shades of purple, pink, magenta and green. The risotto tasting is a three-way win: Crunchy rice puffs taste like a better version of a Bugle; sweet-pea risotto is perfectly cooked, soft but you still can feel individual grains of rice; arancini has a perfect fry, with lovely notes of bacon.

Although one friend wanted “a public-service announcement to say ‘No green peppers in ratatouille,’” I rather enjoyed it and the Bordeaux-marinated duck that it accompanied. The red wine enhanced the duck’s flavor, and the crispy skin was a crunchy treat. This is a very good plate.

Other dishes are more illusion than delivery. Cured salmon is served on a heavy marble slab with the fish encased in a glass dome. When the dome is lifted, the comforting smell of campfire smoke fills the room, but the performance doesn’t deliver. The fish tastes as if it’s been hit with a smoke gun; the indulgent luxury of cold-smoked meat is missing. It’s accompanied by excellent caviar and a bad bagel. You can spend less for a better bagel and lox. 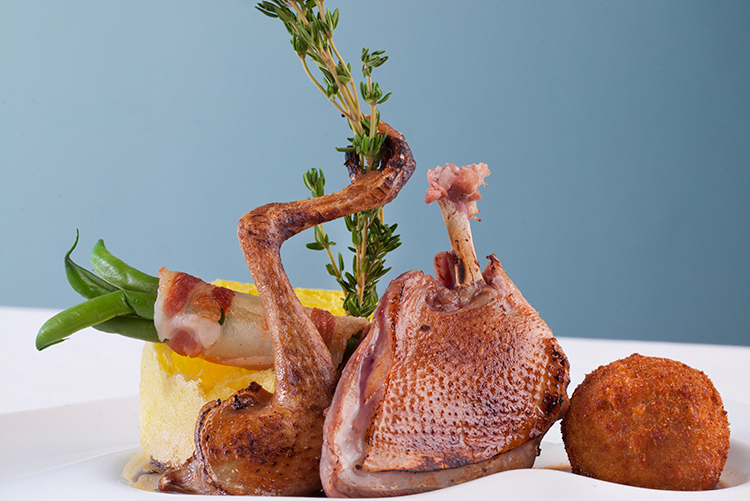 Squab is overly gamey and rubbery, and the chicken-liver fritter is so intense that it blows out the rest of the dish. Better is the confit leg that accompanies it; I loved the whimsy of how it’s served, clutching a bundle of thyme in the talons.

The “Chocolate” dessert is a telling snapshot of what I experienced on each of my visits to The Twisted Frenchman. Garbarino joins guests tableside to stir liquid nitrogen into a chocolate mousse. He ends the show by streaming the excess to the ground, creating a dramatic puff of smoke. It’s a whimsical bit of theater, but the performance is better than the product. The accompanying cake is dry, and the balsamic garnish is over-reduced into a gummy blob that made me wish for the real deal from Modena. The final act of the Drama of the Double-Textured Mousse is just a bowl of chocolate.

For drinks, stick to the excellent wine list and go next door to Spoon to enjoy before- or after-dinner cocktails; the ones served in the dining room here are disastrous. “I feel like these drinks are what you get at the Improv,” a friend remarked. 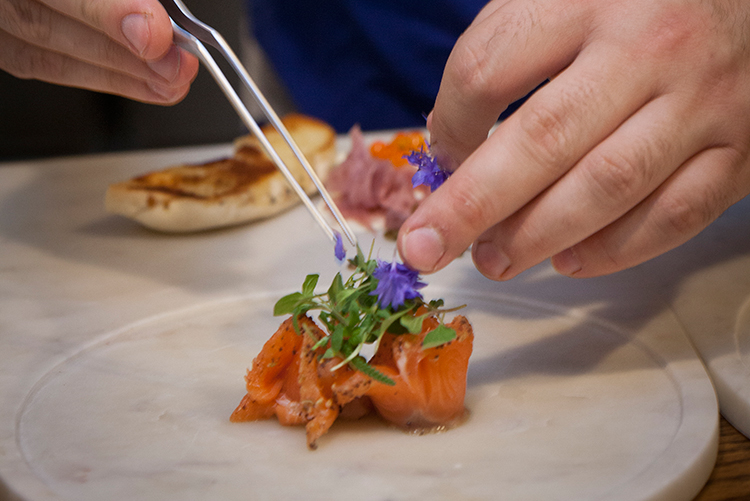 Where The Twisted Frenchman shines most is service and heart, which is why I think that despite its shortcomings, it’s a restaurant worthy of attention. The small front-of-house staff has a deep understanding of the menu, a sharp knowledge of how to pair the wine list to the plate and an awareness of the thought process behind Garbarino’s dishes. It’s really fun to eat here.

​Garbarino and his team are providing a much-needed outlet for a city that’s desperately lacking formal dining options. What The Twisted Frenchman is doing already is quite satisfying and enjoyable, but it’s also pricey. Once Garbarino spends a bit more time in the big leagues, he’s going to be a force — but he isn’t there quite yet. 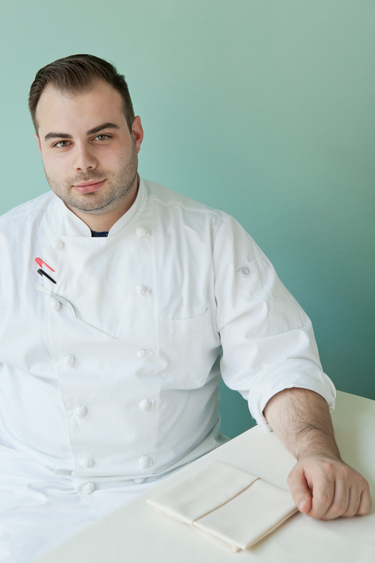 What’s your process for recipe development?
We don’t really show too much how modernist we are, but everything is approached in a modernist way. It’s presented in a way that’s comforting and more classical, but it’s very modernist. Most people don’t care too much about the process or even notice that we’re using tapioca starch to give something mouth-feel.

We research all [of] the additives we add and keep everything natural. We’re more focused on modern technology and technique than on using a bunch of different powders, like using a whipped-cream canister with a needle on it to inject flavor into something.

It can take three weeks to two months to develop a dish. I’ll diagram it out on a piece of paper, starting with the main idea of the dish. Then you start cooking and figuring out what works. Then when we think we’re happy with it, we’ll start sending it out to regular customers so we can get their feedback.

What chefs do you look to as inspiration?
I can’t say that there’s just one chef [whom] I look up to. Outside of this area, you look to Grant Achatz and his chefs de cuisine for what they’ve accomplished. You look to Eric Ripert and the things that drive him to do what he does. So you look to them and to someone like Thomas Keller. I have all of their books; I read them and I cook from them. You find yourself at 3 a.m. reading all [of] their menus. You need that outside inspiration.

On a local level, I had a great time with Brian [Pekarcik, executive chef/co-owner of Spoon]. I learned a lot from him. He’s great with talking to people and interacting with them. Sometimes I feel like I should go back and get a psychology degree so that I can learn more about the stuff that he knows. It’s inspiring, it really is. Then you look to someone like Trevett [Hooper, co-owner of Legume] and his sous and the stuff that they’re doing.

Where do you see yourself going with this?
In two years, I want to move into a space [in which] you can create the most beautiful, elegant restaurant Pittsburgh has ever seen. I’m still going to keep it to about 50 seats, but the kitchen staff is going to go from 3 to 8. That’s what we’re going to evolve to. We’re limited right now as far as what we can do because of space.