Review: One Thirty One East

Located in the southwest suburban community of Carnegie, One Thirty One East embodies the area’s renaissance. 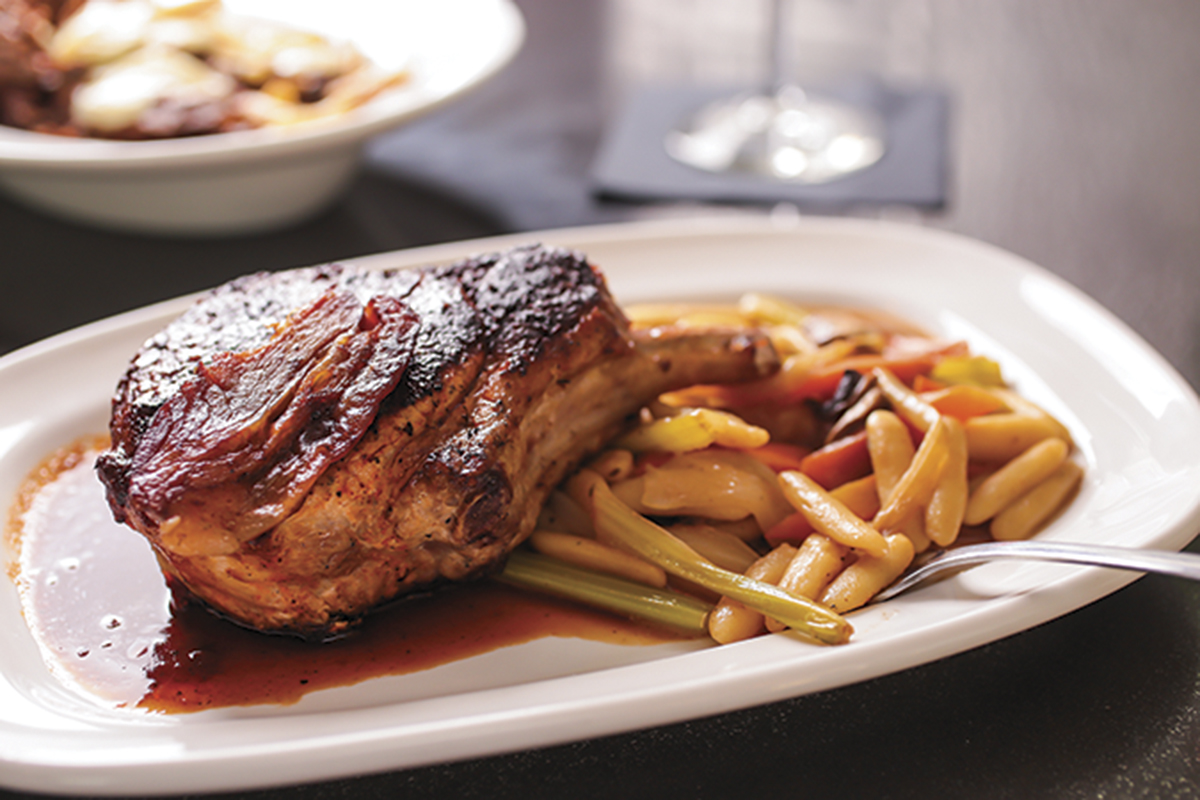 After devastating floods in 2004 and 2010, the town of Carnegie has experienced a rebirth. Its main street (which, of course, is called “Main Street”) has re-emerged as a charming downtown district, chock-full of shops, restored historic buildings, amenities and restaurants.

Among them, One Thirty One East, which can seat 82 diners total on two levels, stands out as one of the most elegant choices. It has become a destination for diners looking for something new.

Executive Chef Bernie Bereksazi and partner Michelle Eibl own One Thirty One East. They met while working together at the former Café Georgio in Bethel Park; both have extensive experience in the food-service industry. They say they were lured to Carnegie as the site of their first venture because of its easy-to-get-to location — roughly 7 miles from downtown Pittsburgh — and the success of its recent economic development and stormwater-management efforts.

One Thirty One East’s modern, sleek interior was redone with the help of Pittsburgh firm FortyEighty Architecture. The space exhibits a color scheme of tranquil blue, silver and dark brown. There are hints of sparkle in the curtains, the mirrors and the light fixtures, giving the place a feminine touch.

Bereksazi describes the food as “world-fusion freestyle cuisine.” That means that Bereksazi likes to “freestyle” his cooking to create combinations and flavor profiles that he finds interesting and sometimes uncommon. For example, the top-selling Brussels sprouts appetizer ($7) has a lot going on — there’s a bit of Asian fusion created with fresh ginger,
Indonesian sweet soy and a wasabi aïoli.

The restaurant’s menu changes every month or so based on the availability of ingredients and the chef’s creative impulses.

“The food is fine-dining food; it needs to be approachable while, at the same time, being a little different and a cut above,” he says. “I spend a lot of time talking to customers so I can meet their desires.” 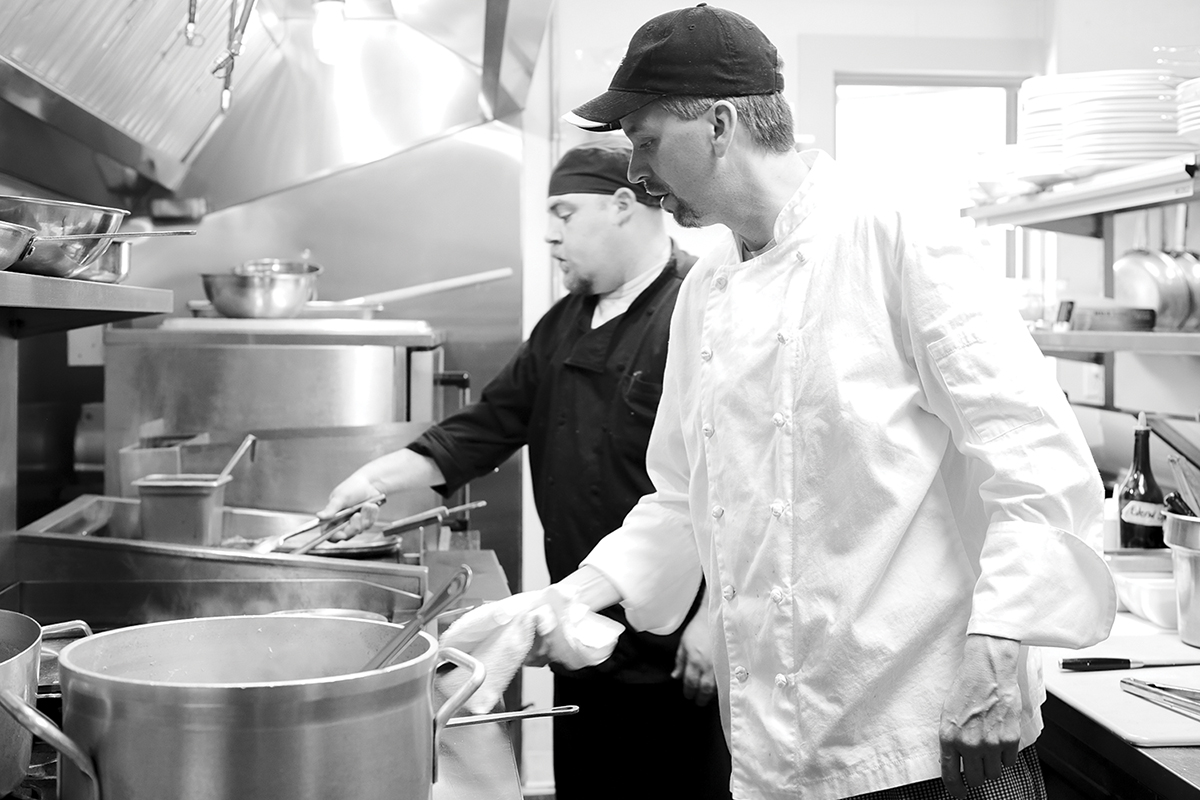 In addition to the aforementioned sprouts, appetizer favorites include Bob’s shrimp ($9), small deep-fried shrimp served in a miniature parchment-lined fry basket with fried green tomatoes and a malt-caper remoulade, and General’s yellow-fin tuna ($12), featuring crisp-fried fish with hot peppers and soy. The beet salad ($9) is artfully presented, with tender roasted beets assembled on arugula, accented with pickled red onion, fried feta and marcona almonds, drizzled with grilled-pear vinaigrette.
The rectangular flatbreads ($9-$12) have a very thin, crispy crust and are offered with several topping choices; they could function as a lunch or dinner entrée, especially if you pair them with a salad. The roasted-tomato jam and cheese version ($9) features a tasty three-cheese mix of asiago, cheese curds and Parmigiano-Reggiano; the only downside is that the ingredients are so tightly combined that each bite tastes like the last one.

Among the entrées, there are a lot of good choices. The seafood dishes are well-executed. I’d had the Canadian walleye ($28), prepared in old-fashioned Meunière style, with a bit of flour coating, lemon, parsley and butter; the staff now uses halibut ($29). The Spanish paella ($33) comprises shrimp, scallop, swordfish, crab, mussels, sausage and chicken on saffron rice. This is a delicious entrée, but it tastes like the components are cooked and assembled after the fact, rather than prepared together in a single paella pan.

The lamb noodle ($17) is a winner, with big, tender chunks of braised lamb, mushrooms and cheese curds on al-dente cavatelli noodles. This filling dish has a meaty flavor. The chicken and grits ($16) also is delicious, albeit a little too salty, with a roasted half chicken, roasted veggies and a crisp asiago grit cake.

The two desserts I tasted were homespun and delicious. The cheesecake changes regularly; I sampled the berry variety, built on a thick graham cracker crust with a nice filling that had both a desirable consistency and level of sweetness. Similarly, the flourless chocolate torte ($7) is very chocolatey yet not too sweet — and has a creamy mouthfeel.

Regarding the beverage menu, Bereksazi says, “Our bar program is intended to match the food by being affordable but [offering] quality.” The bar program was designed by Eibl, with help from an outside consultant. There are many nice wines available by the glass, and you should make an effort to try the signature after-dinner drink — the housemade “grapefruit-basil cello” (a version of limoncello, $7).

Take the time to visit downtown Carnegie to experience the growing excitement around this community’s renaissance. 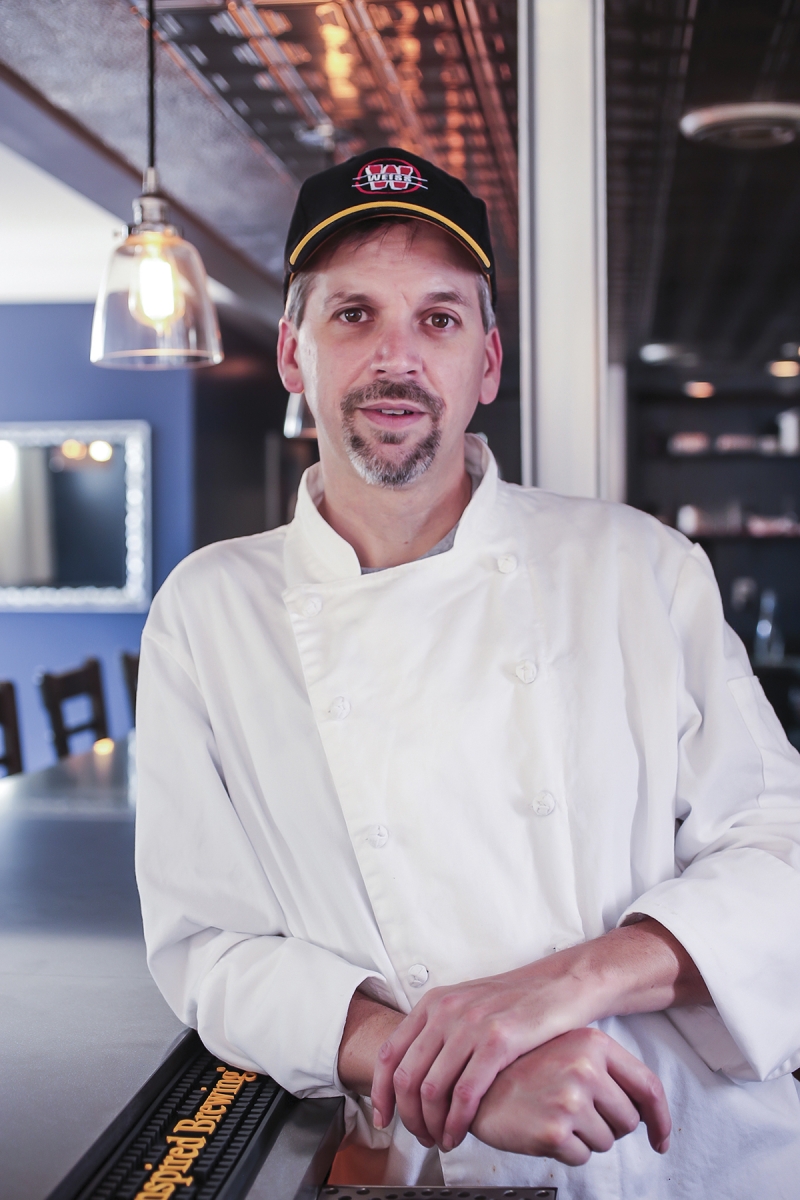 How did you and [partner] Michelle Eibl meet?
We worked together at Café Georgio, where I was [the] executive chef and a partner. Michelle was working there as a bartender. She had the best work ethic I have ever seen, and she liked my singing [laughs].

How did you choose Carnegie for your location?
Our landlord had purchased the building, which was formerly Ciao, before it was renovated and contacted me to come and see it. I had heard about the flood, and how they had done tons of work on the water systems to prevent future problems. Papa J’s here is iconic, and there are a lot of new restaurants. The more I learned about it, the more I liked it.

Are you pleased with your decision?
We are so happy. It’s very easy to get here, and we are next door to a large public parking lot that serves Main Street and is free after 5 p.m. And the people here are great . . . The mayor, Jack Kobistek, has been very supportive. Our landlord has been wonderful and really helped us to renovate the space. Our business neighbor, Bonita Farinelli, owns a shop called Eccentricity Designs, and she added all sorts of little touches to our décor to give the interior a little bit of an antique feel.

How did you get your start in the business?
It seems like everyone in my family [has] worked at restaurants. My mom is a good cook and was a waitress with five kids. All of us had stints working in restaurants, and one of my brothers is now a chef and another [was] a bartender. Although I have worked in restaurants my whole life — starting out as a dishwasher — it has been my lifetime dream to own my own place.

What are you trying to accomplish with your restaurant?
I want it to be relaxed and welcoming. I want it to be fine-dining without being stuffy. You should feel like you can just pop in for flatbread and a glass of wine, which people do all the time. I am honestly very humbled by the reception we have received so far. It started out with my regulars from Café Georgio, and now the word has spread.

This article appears in the November 2014 issue of Pittsburgh Magazine.
Categories: Restaurant Reviews