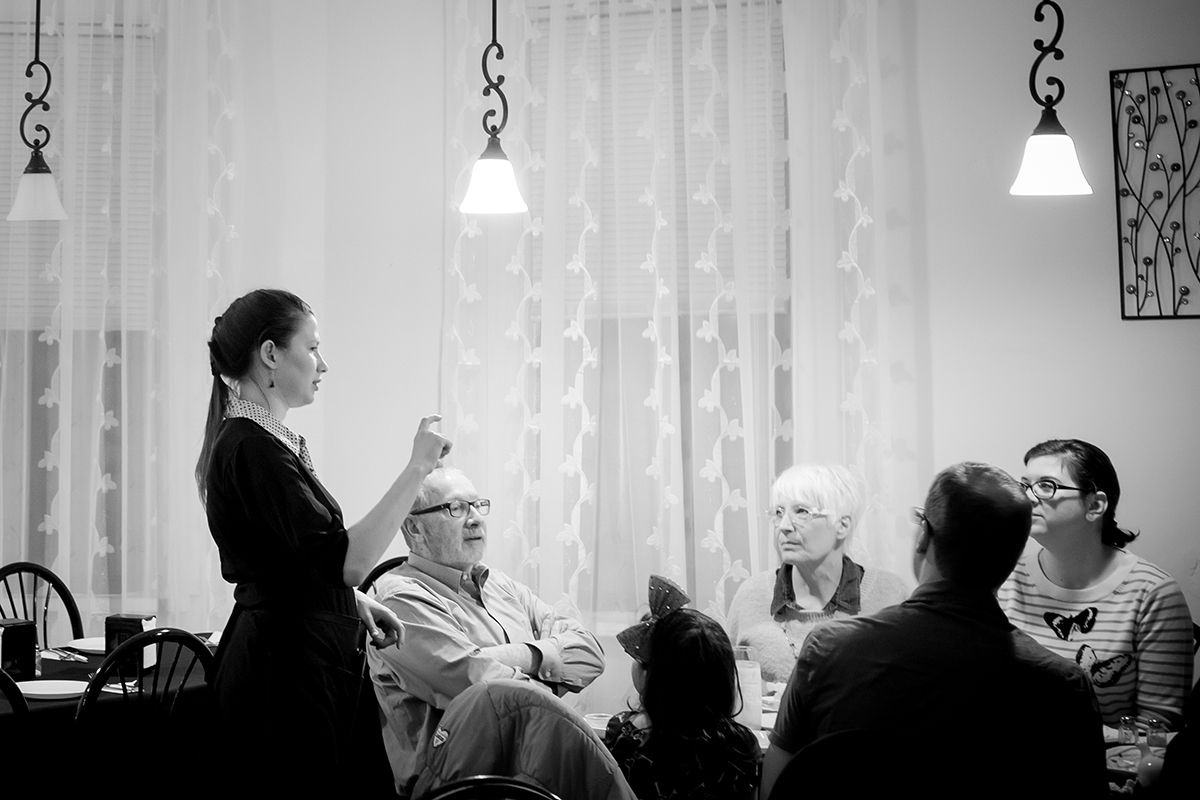 Hayrullo and Tahmina Umaraliev moved to Pittsburgh from Uzbekistan in 2012 to be closer to their two daughters and their grandchildren. Hungry for a taste of home and eager to share their nation’s cuisine, the couple opened Kavsar, the city’s first Uzbek restaurant, in 2014. Uzbekistan is a country at the crossroads of Europe and Asia, home to a dynamic mix of cultures for nearly 3,000 years. Its position on the ancient Silk Road has created a vibrant culinary blend of Eastern and Western flavors.

Kavsar is named for a paradise river that the restaurant owners describe as crystal-clear and whiter than milk.

You enter Kavsar at street level, and a sign instructs you to take the stairs to the left. You land in a bare-bones second-floor waiting room. Walk ahead into the dining room, and you’ll start to feel as if friends from Uzbekistan have invited you to a family dinner. 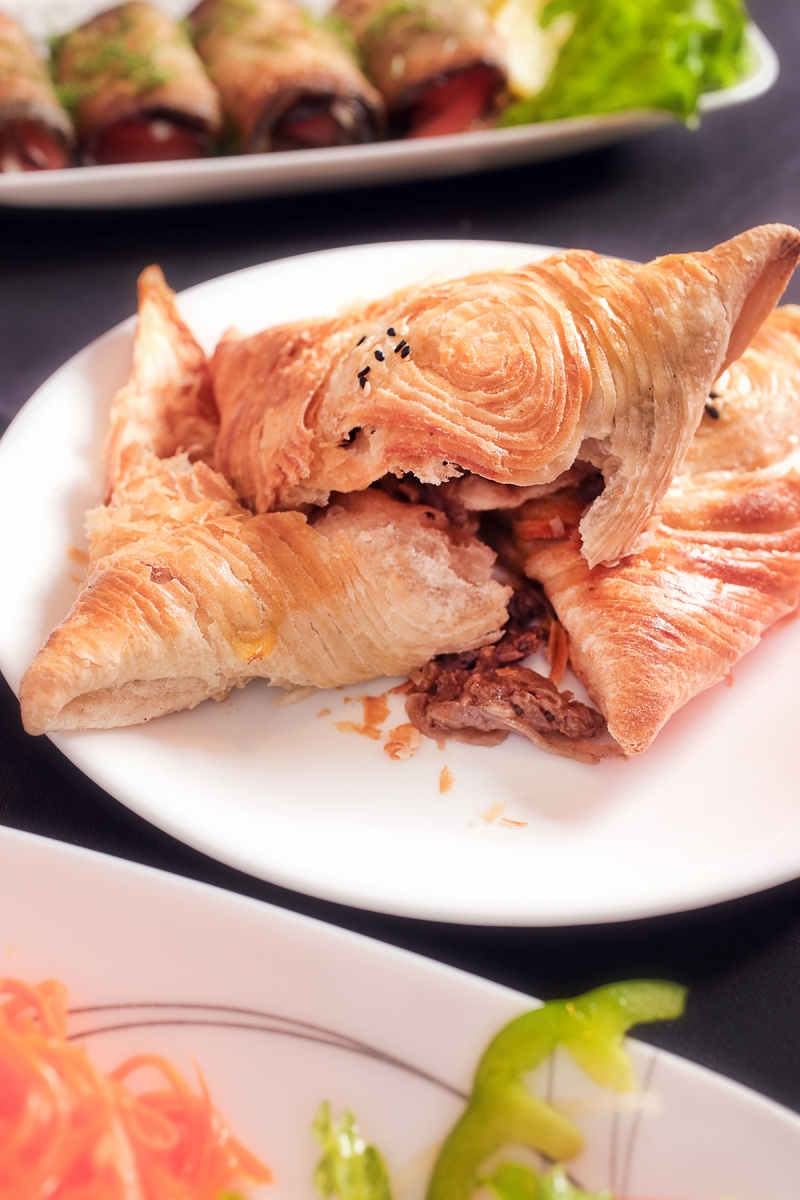 Formal tablecloths and fast-food napkin-holders share table space. Pillars covered in shimmering fabric capped with bouquets of artificial flowers guard the corners, and on the far wall a line of chairs waits for a larger party.

Perhaps that party will be inspired by the latest music videos from Uzbekistan that are playing on the large-screen TV. Some people will find the videos — and the accompanying Uzbek travel DVD — distracting, but I think they add to the charm. The artists and the dance numbers featured in their videos (similar to Hindi-language productions) are excellent.

Mutton is the meat most traditionally associated with Uzbek cuisine, but Kavsar instead opts for beef, which is halal and sourced from Salem’s Market & Grill in the Strip District. Considering how many beef dishes are included on the menu, I was impressed by how Tahmina Umaraliev manages to coax the cuts into such a variety of flavors and textures. Still, with the abundance of terrific lamb in our region, I would have liked to see it shine in at least a few dishes. 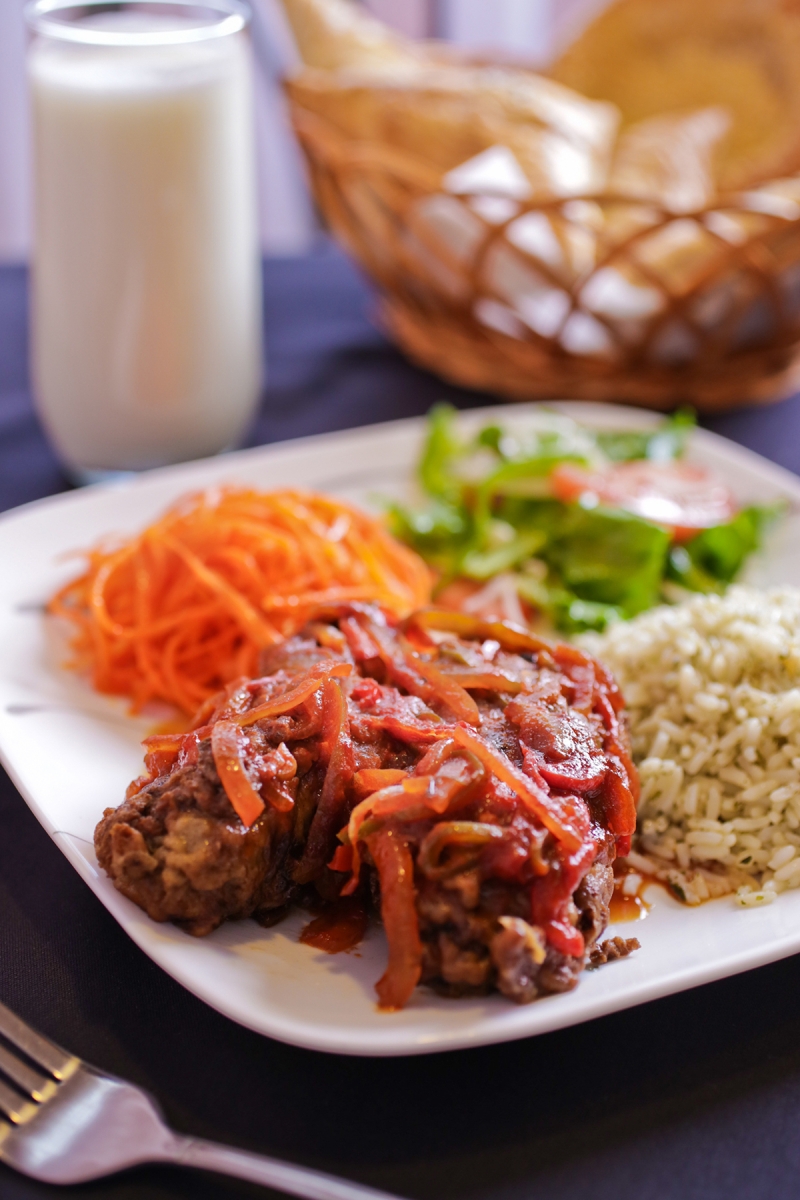 A must-order is manti. The juicy, soft and crave-worthy dumplings are filled with hand-chopped beef and onion. Chuchvara, in a broth enhanced with green herbs, also featured a tender and flavorful meat dumpling. Think of this dish as an eastern-European version of tortellini in brodo, with beef instead of pork filling. The light broth takes on more meat flavor as dumplings mingle with it.

Another standout soup is the borscht. This remarkable beet soup has gotten a bad rap, perhaps because ordering it can be confusing: Cold beet puree with sour cream? Hot and sour? Here it’s a rich beef broth made with beef and potatoes, perfect for a cool night.

Lagman is a highlight entrée and perhaps the best example of the geographical influence of Uzbekistan’s location on the Silk Road. Handmade noodles mingle in a savory sauce of red and green bell peppers, onions and celery. Not surprisingly, there are chunks of beef. 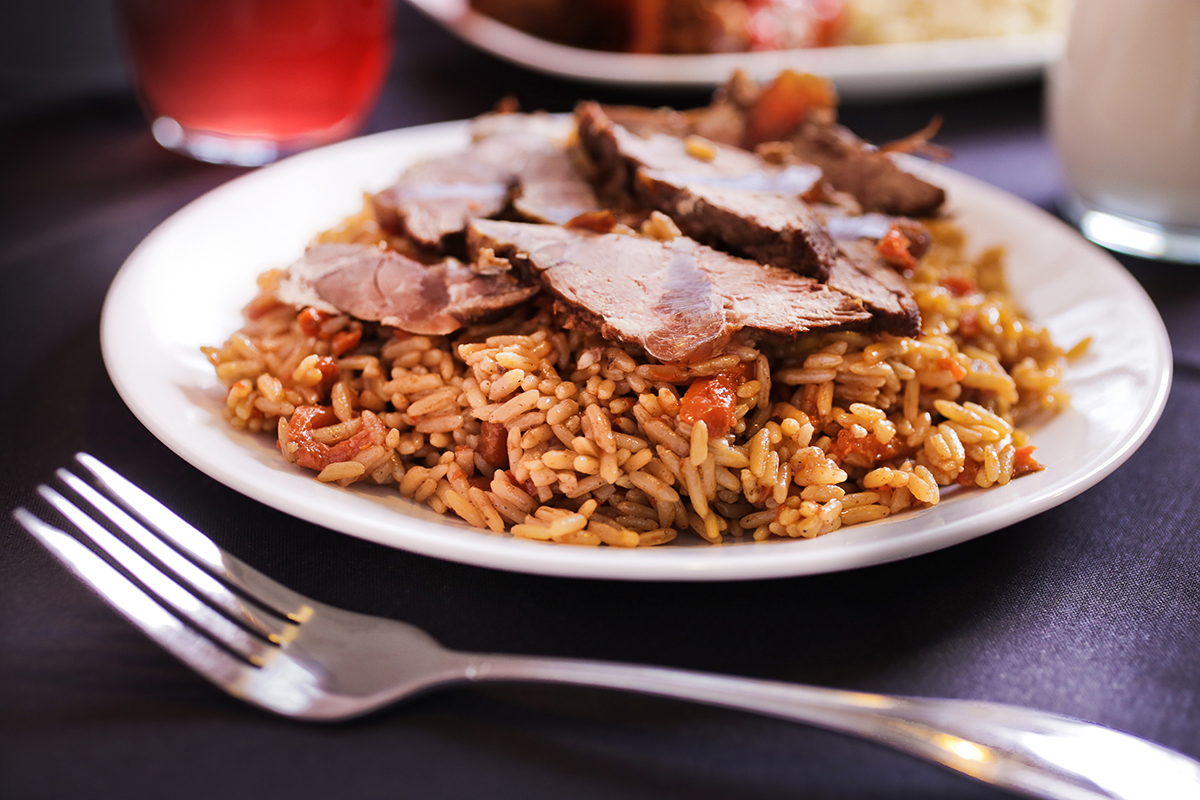 There are some not-so-great dishes on the menu. A gorgeous-looking carrot salad is overwhelmed by pre-chopped raw garlic. The homemade fruit drink tastes like Kool-Aid mixed with a melted fruit-punch Popsicle.

Kavsar chicken has a nice smoky paprika flavor, but instead of “stewed and fried chicken with bones,” I had dry-as-can-be chunks of boneless breast.
Palov, which the menu touts as both “the symbol of Uzbek food” and “part of the mentality of Uzbekistan people,” underwhelmed on the plate. The rice was tasty, but the dry hunks of beef on top were not.

Kavsar shares a stern message for vegetarians on the menu: “It is impossible to imagine the Uzbek food without meat.” Although it’s not impossible to dine vegetarian at Kavsar, it’s certainly challenging. Indeed, the vegetarian menu largely is a repetition of meat dishes minus the meat. Part of the fun of Kavsar is dining family-style, so the vegetarians in the bunch might feel left out.

There are five menu items that must be ordered at least 24 hours in advance. A group of us enjoyed a festive meal of Dimlama, a rich stew of beef and vegetables, and Beshbarmak, beef with succulent housemade ribbons of flat noodles. We also had Non Orlepeshka, toasted and sesame-seeded Uzbek bread. Both dishes were very good, but aside from portion size, they didn’t differ much from the other menu listings. I wish the Umaralievs used the call-ahead menu as a place to feature lamb. 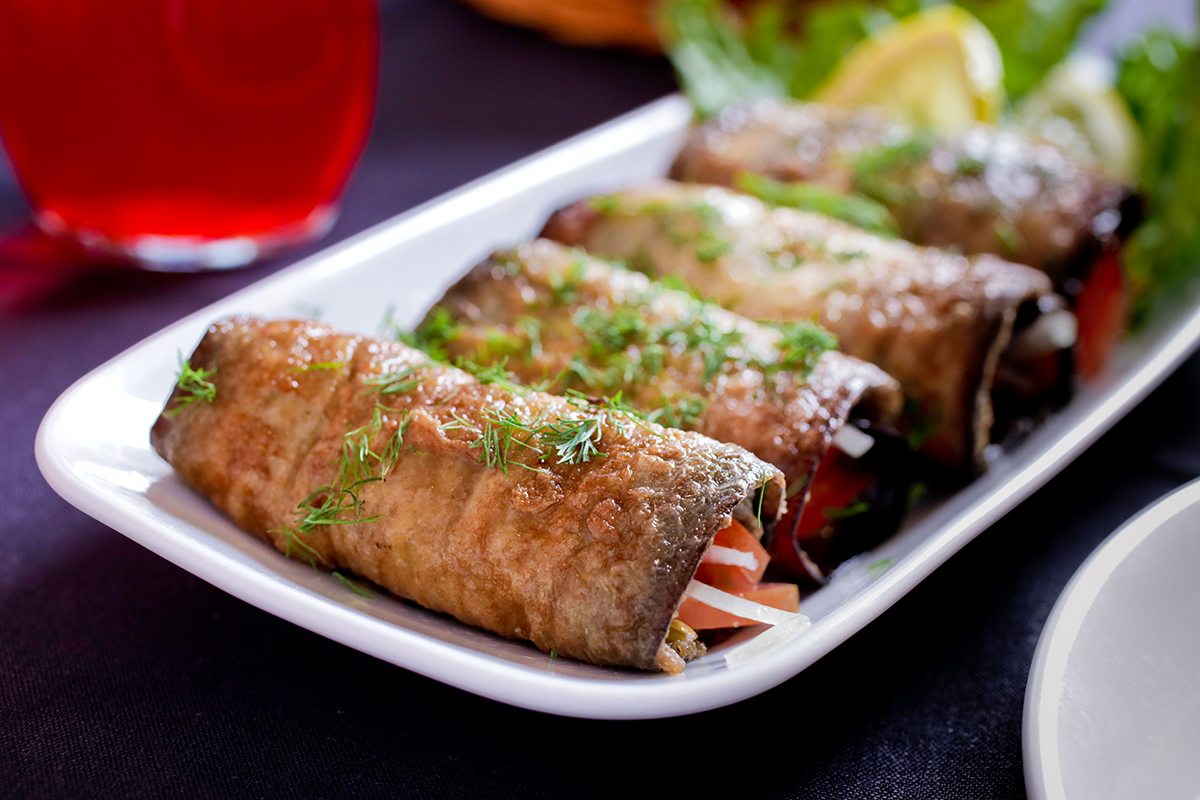 Islam is the dominant religion in Uzbekistan, and as a reflection of Muslim tradition, no alcohol is served at Kavsar — nor should you bring your own. Instead, enjoy a fresh pot of green tea, with hints of citrus, or a glass of ayran, a sour yogurt drink popular among Uzbeks.

Kavsar might not yet be among the most-esteemed Pittsburgh restaurants, but this family dining room is one you should certainly visit. 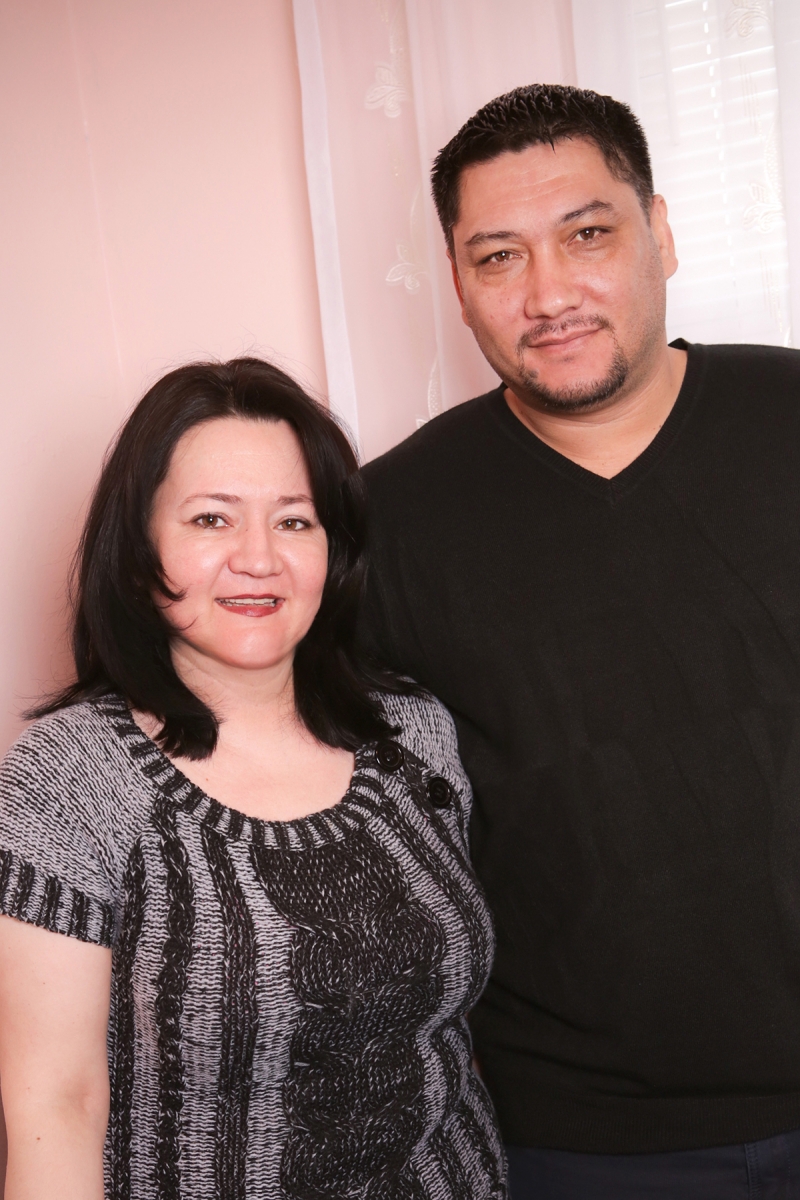 *Note: As the Umaralievs aren’t fluent in English, this interview was conducted with the assistance of a translator.

How do you like living in Pittsburgh?
Hayrullo: I am getting used to it. For me, the city is pretty small. I’m from the capital of Uzbekistan, Tashkent. It’s much bigger — [more than] 2 million people.

What brought you here?
H: Two of my daughters got married here, and now they both have children. We wanted to be closer to them.

What did you do in Uzbekistan?
H: I ran several businesses in Uzbekistan, and I ran a few restaurants there. But my major field of study was textiles and fabric.

Do you cook?
H: No. My wife Tahmina does the cooking. I run the business and get the ingredients. It’s a family restaurant. We like to share the food of our country. People in Pittsburgh are starting to get curious about our food now, but it’s taken a little while.

What should we know about food from Uzbekistan?
H: Well, the country is located in central Asia, but it doesn’t have much to do with Chinese cuisine or Turkish cuisine or the cuisine of Afghanistan. We have our own culture, and it is our cuisine. Because our country was on the Silk Road, we have a cross of Europe and Asia. For example, the Uyghur people brought the influence in the lagman.

Why are you using beef instead of lamb?
H: Lamb in Uzbekistan tastes very different than lamb in the United States. We didn’t want people to have a deceiving taste of what lamb would taste like in Uzbek dishes.

Did you cook in Uzbekistan?
Tahmina: Not in a restaurant. The first time I’ve done that is here [in Pittsburgh]. Only for my family in Uzbekistan.

How long does it take you to prepare everything?
T: We make it all from scratch. Fresh. We don’t use frozen food. We have things ready to cook, but we don’t make anything until the customer orders it. My husband shops every day.

This article appears in the April 2015 issue of Pittsburgh Magazine.
Categories: From the Magazine, Restaurant Reviews