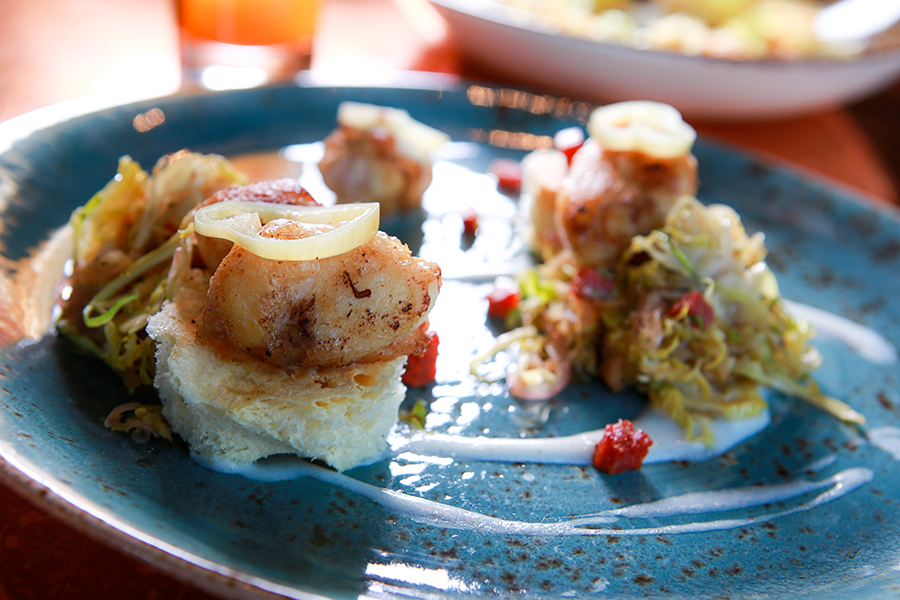 Grit & Grace is a debonair downtown spot where you can share food of every variety while trying inventive cocktails. The menu of creative, modern fare mixes street food and high cuisine with finesse.

Experienced local chef Brian Pekarcik and restaurateur Rick Stern developed the business concept as they collaborate for a third time; Spoon and BRGR are their first two projects.

Although Grit & Grace can accommodate 85 diners, it feels intimate because of its long, narrow shape. Each of the two long copper tables at the front of the restaurant can seat eight people. Both tables are set aside for walk-in customers — which is great at a restaurant where it’s generally tough to get a reservation on short notice, especially on weekends. 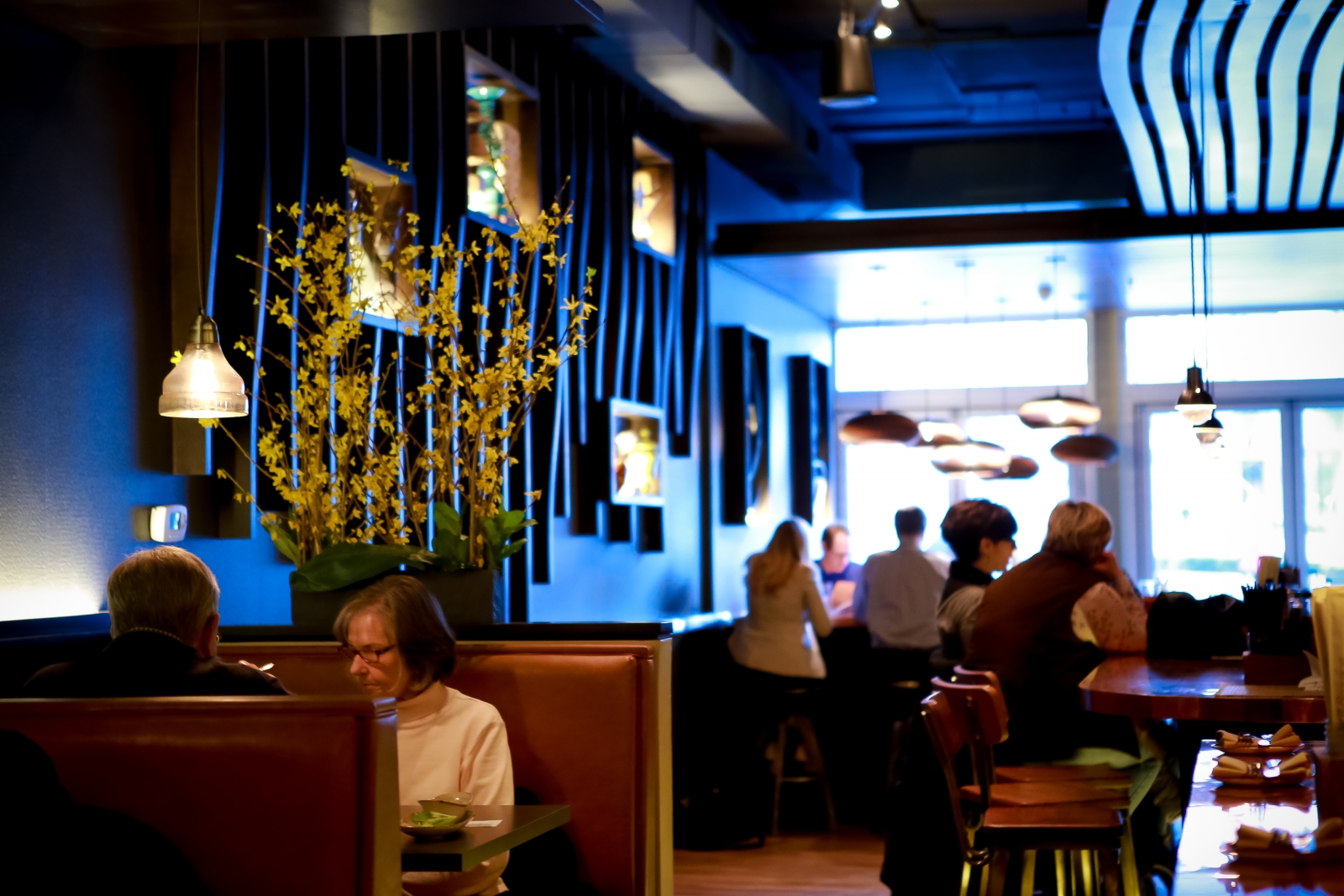 The food playfully borrows from all sorts of cuisines, such as Indian (goat and curry), Chinese (steamed buns and hoisin), Korean (kimchi), Japanese (ramen and miso) and American (short ribs and biscuits). Pekarcik says he believes this food represents 2014 because it exhibits the diversity and sophistication of today’s diners. Even the trio of housemade condiments found at each table — soy and black vinegar sauce, chile sauce and fennel-onion compote — reflects three cuisines.

Pekarcik and his team created the menu with sharing in mind. For the dim sum, a server will present a tray containing four or five items ($5 apiece); you may choose as many as you like. Offerings change daily but may include tender pork belly, or shrimp or squid salad. Some choices were superb, while others were slightly bland. Overall, though, starting with dim sum is a fun way to set the tone for your meal.

The menu continues with “salads, sandwiches and noodles, etc.” Although everything is good, a few items are standouts. For example, the pig-face roulade ($9) is a perfect reinterpretation of breakfast; the tender pork is served with an egg prepared over easy, miso apple butter, chicharrones (fried pig rinds) and egg-yolk hot sauce. Also wonderful is the corned duck breast ($14) — a riff on the Reuben that features tender duck-leg confit, rye noodles, an egg, pickled mustard seeds and cabbage. The roasted squash and farro salad ($7) in a mild green curry sauce, accented with apples, frisée and creamy goat-milk yogurt, is a fine vegetarian option. 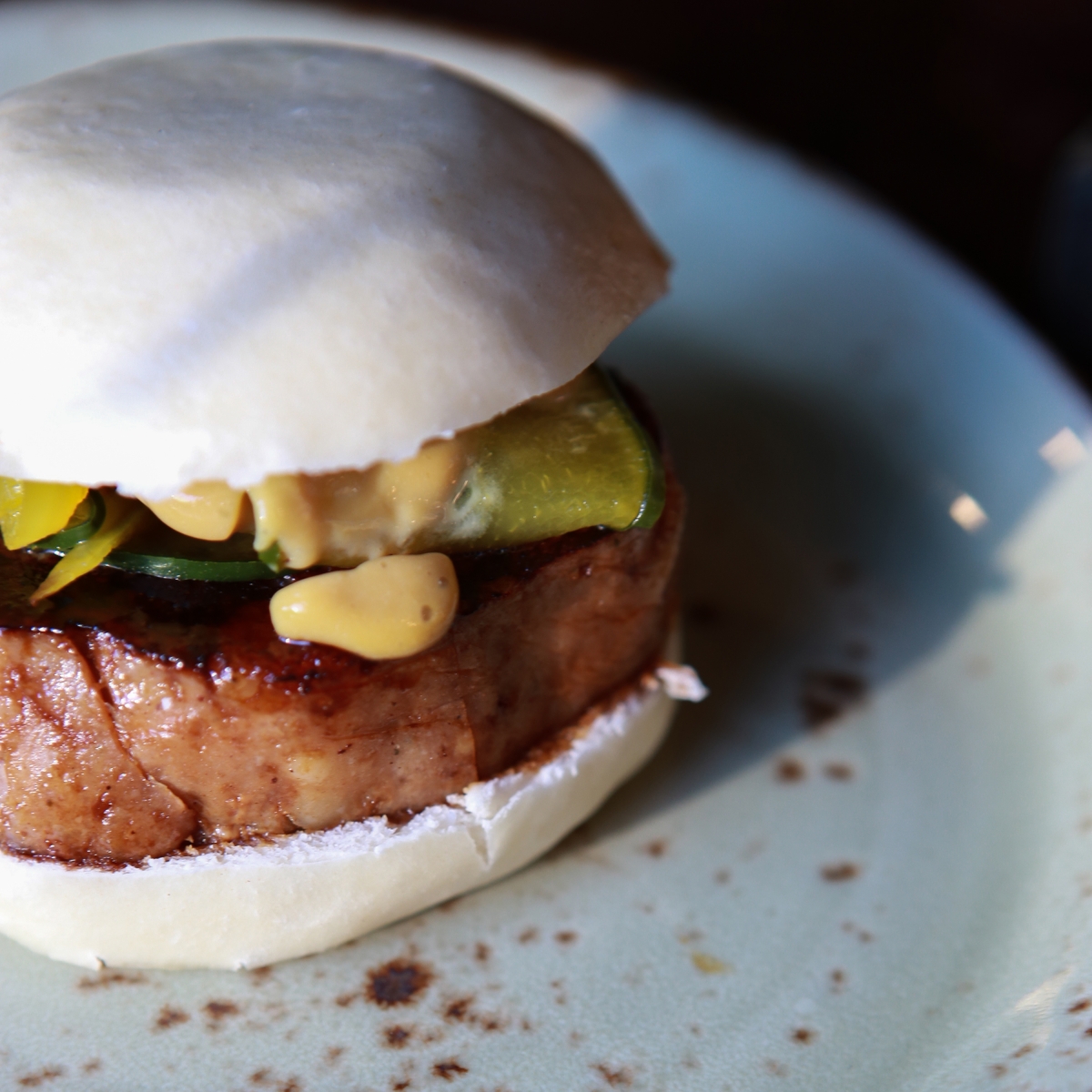 The next section, “for sharing, small and large,” also lists food of various sizes, flavors and price points ($6-$20). Top picks include the tender tilefish with crispy skin ($20), plated with a multigrain salad, citrus accents and brown-butter sauce, and short ribs ($6) served on homemade cream-cheese biscuits.

The bar menu — spearheaded by Spoon Wine Director John Wabeck and Grit & Grace General Manager Heather Perkins — has been conceived with the intent of matching the food. The team aims for it to be “very lighthearted and multifaceted,” says Pekarcik. Two great cocktails are the Duck Sauce ($12), a light blend of Canadian whiskey, white rum, ginger liqueur, dark rum and housemade plum sauce accented with a tiny spoonful of duck-liver mousse; and the tangy G & G Club Cocktail ($10), consisting of bourbon, amaro, crème de cassis and orange bitters. Some local beers are available, but there also are imports. 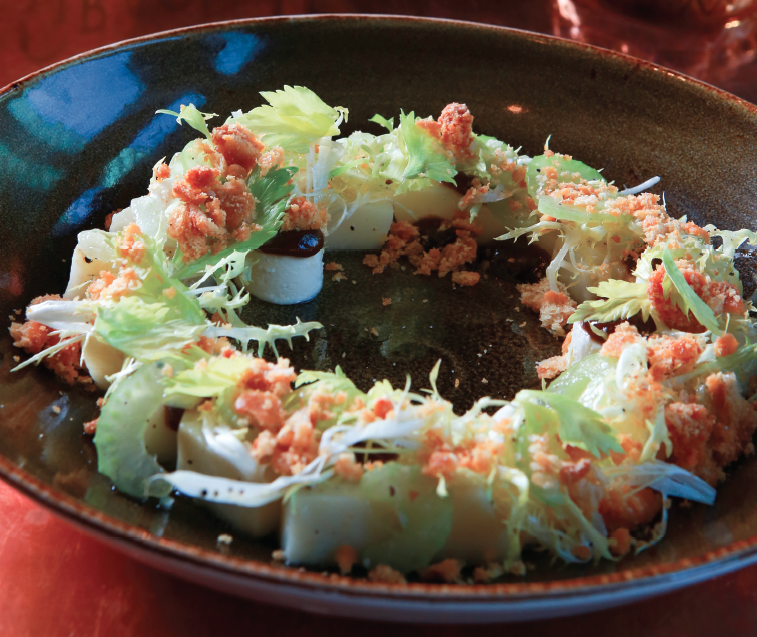 Generally, I enjoy offbeat constructed desserts, but the two I ate had undesirable flavors or textures. For example, the previously offered apple tart ($5) was mushy like applesauce and garnished with heavily smoked, crushed Cheez-Its that taste burnt; the dish was accompanied by an unremarkable cheese crisp, along with Cheez-It ice cream and caramel. The other dessert ($5) consists of coffee and chocolate truffles towered between squares of chewy cardamom mochi (rice cake) in a lemongrass anglaise and liberally sprinkled with crushed Fruity Pebbles cereal. This treat shows imagination, but the flavors and textures don’t work together. 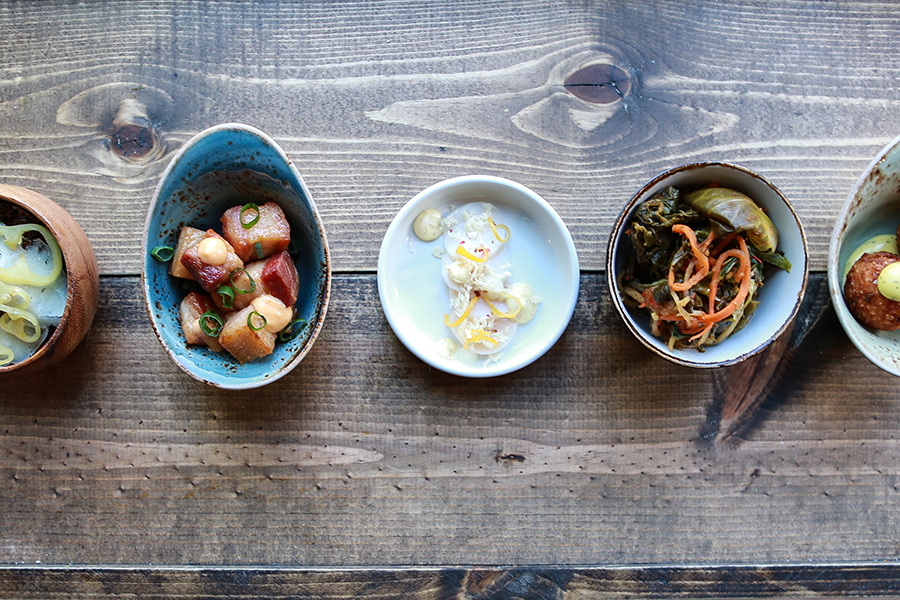 Grit & Grace’s apron-clad staff members get top marks for conscientious, attentive service. They are excited about the food, and they welcome questions.

Going forward, Grit & Grace’s biggest challenge will be to continue offering a wide breadth of interesting flavors without feeling unfocused. A few diners told me they thought each plate had too many competing tastes. To me, though, that is the magic of Grit & Grace — it experiments and isn’t wed to authenticity or tradition. Combine this imaginative cuisine, alluring space and spot-on service, and it is clear that the restaurant is headed for success. 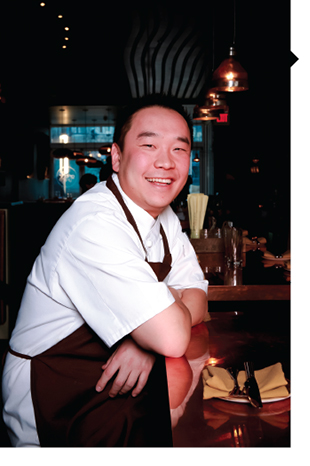 How long were you planning Grit & Grace?
[Business partner] Rick [Stern] and I have been thinking about it for several years. We’ve traveled to eat together in New York, Chicago and San Francisco to develop our concept. We knew we wanted something with a very urban feel — fun, hip and happening. We definitely wanted it to be social, where people share food, “breaking bread” with friends and family. We also wanted it to be what’s happening now, not last year.

What do you think is “now” in restaurants?
Dining has become much more casual. There has also been a really interesting trend of blending street food and upscale cuisine. In addition, there’s been a movement toward a more global cuisine, where you can mix and match different influences.

Are you attracting the crowd you anticipated?
Honestly, the crowd is much more diverse than we expected. We assumed we would get a lot of young people, but actually we are getting people of all ages. We are drawing a lot of the theater crowd.

How have Pittsburgh’s population changes affected you?
This restaurant might not have made it 10 years ago. Pittsburghers have become so savvy with regard to food — and have a lot more experience with food in other cities and countries — so they understand all the references we are making to different cuisines, from Indian to Chinese to Korean. They understand what we are trying to do, whereas they may not have 10 years ago.

How many restaurants do you now own?
We now have two BRGRs, Spoon and Grit & Grace [and a BRGR food truck]. [Because] we now have four restaurants, we decided we should brand our restaurant group. It’s called S + P, “a seasoned group,” which we thought was funny. But [it] also makes sense because Rick’s last name starts with an S and mine starts with a P.

Do you have plans to expand Grit & Grace?
No. Right now we have as much as we can handle. We need to continue to focus on refining Grit & Grace to get it as close to perfect as possible.

This article appears in the April 2014 issue of Pittsburgh Magazine.
Categories: From the Magazine, Hot Reads, Restaurant Reviews