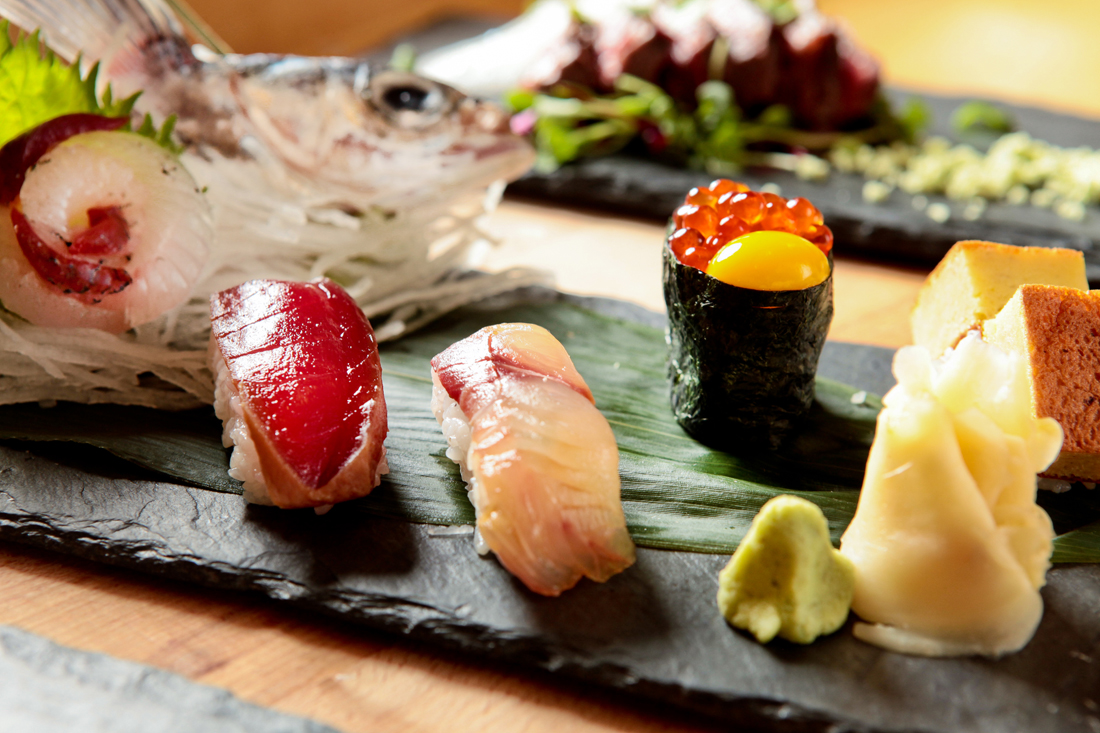 Our city is home to many restaurants — but then there are those gems that provide memorable experiences. Count Fukuda among those spots. In addition to its focus on sushi, Fukuda (which means “blessed rice patty” in Japanese) offers a multitude of hot and cold Japanese-inspired dishes.

Featuring the impressive creations of executive chef/co-owner Matt Kemp (including his take on and presentation of fish flown in from around the world), this place is a haven for foodies and dining adventurers.

A popular starter is the common Japanese street food called robatayaki: a skewer stacked with grilled morsels of marinated meats, like chicken and duck, or veggies, like scallions and shiitake mushroom heads (one skewer costs between $3 and $6). To prepare fare, chefs use a Japanese ceramic grill with a mixture of hardwood charcoal and imported Japanese binchotan coals to give the food a traditional flavor. Another simple but delectable appetizer is the hot, salty (and slightly charred) grilled edamame ($5.50).

The superb ramen soup ($10.50) is served at lunch and dinner. Varieties are offered on certain days — but I recommend the satisfying pork-belly ramen with a meaty broth, pork-belly chunks, plenty of tender noodles and a poached egg. 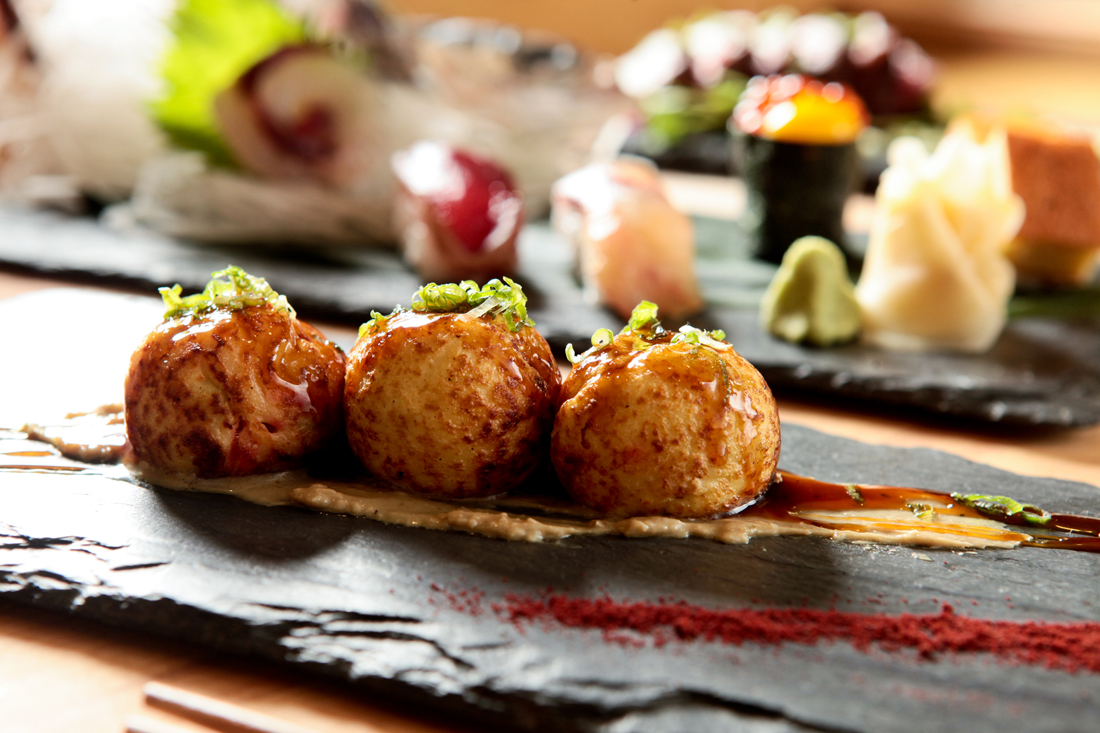 If you’re interested in sushi alone, consider sitting at the small sushi bar to watch Kemp (or sushi chef Caitlin Nagelson) prepare your order. The sushi is excellent; each slice of raw fish I tried was perfect, with clean flavors.

Kemp orders fresh, whole fish from around the world, including some from Japan’s Tsukiji Market (the biggest seafood market in the world), and uses fresh (and rare) American-grown wasabi; he creates the daily menu (posted online) to reflect what he’s received, and even blends the soy sauce in-house. Offerings include kampachi (Hawaiian yellowtail at $7 for two pieces of nigiri; $11 for three pieces of sashimi), sake (Scottish salmon, $6; $10), maguro (“big-eye” tuna, $7; $10) and asa isaki (grouper, $13; $19). I like the ikura rolls (Skuna Bay roe, $8), which boast a refreshing consistency.

Among hot dishes, there were two standouts: the simmered pork belly ($10.50), braised for three to five hours, and the roasted fish head ($26), simply salted and slow-roasted (it can take about 35 minutes) and served with roasted garlic and ginger soy sauce. The kind of fish head changes based on availability, but I enjoyed the very tender, perfectly cooked kampachi.

Want to put yourself in the chef’s hands? Then choose the chef’s choice sushi sampler ($24, small; $38, large) or “The Fukuda” ($39), a prix-fixe meal including a variety of small plates, plus a treat. 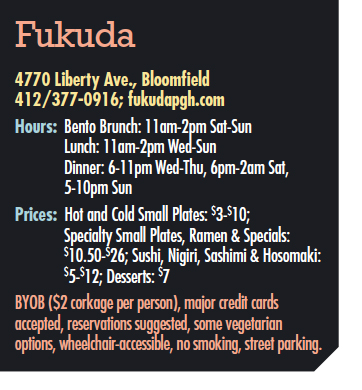 Chef Kemp’s subtle touch extends to his daily dessert: The housemade chocolate shiitake ice cream is a single quenelle, served with a chocolate-covered shiitake slice and a small dose of lavender powder, creating a very sophisticated presentation and flavor mixture that complements the food. The sake sorbet with apple-miso cream and green-tea caramel crisp is marvelous and delicate.

Fukuda’s set up in a tiny space decorated with pieces by local artist Ron Copeland. Although the original plan was to sell the artwork on display, patrons have become attached to the idiosyncratic finishes. Keep an eye out for a fresh look; interior renovations are currently under way.

Though many rave about Fukuda, there are a few complaints, namely regarding the price-portion pairing. I, too, was surprised by how many items I needed to order to feel full. Whether costs have turned off some diners remains to be seen — but dish pricing reflects the high costs of the specialty items offered (particularly the fish, which many would consider worth it).

Kemp is part of the growing movement of young, edgy chefs who are making a dent on our city’s culinary scene; he and his business partner, Hoon Kim, serve Fukuda fare outside of their space (see them at AVA Lounge on Sundays), added a bento brunch back in March and even offer a monthly sushi-rolling course. It’s clear that Kemp and Kim are deeply connected to the latest local food developments; keep an eye on them, as great things are likely in store. 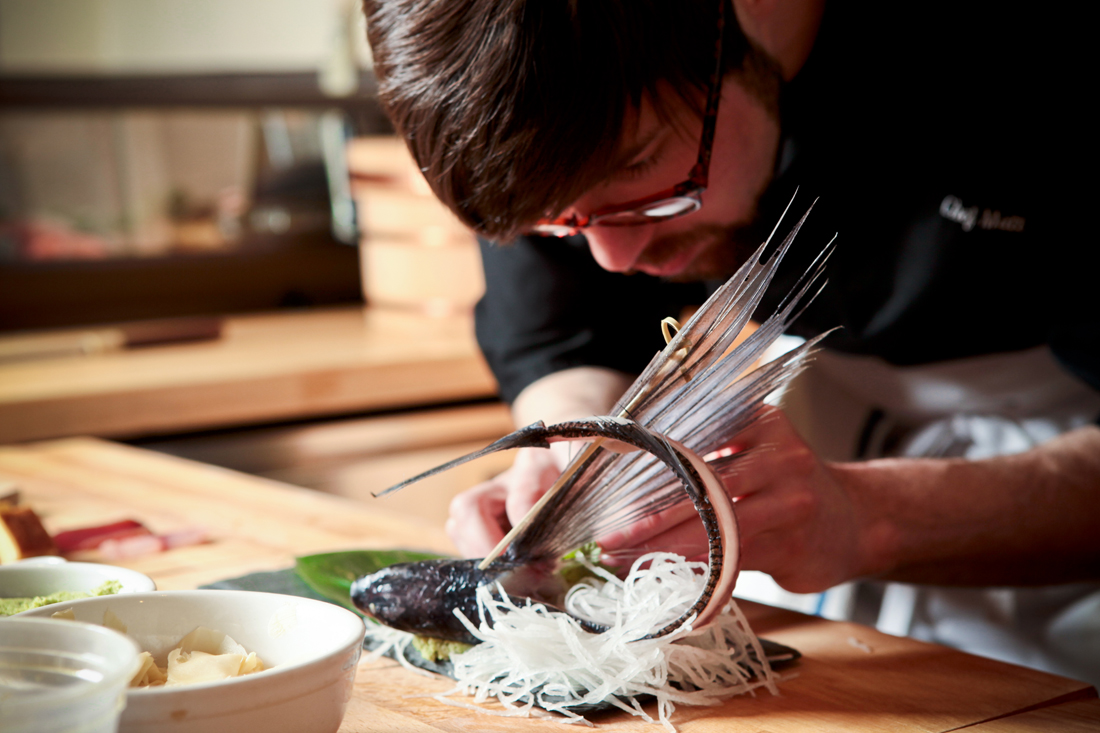 Did Fukuda start as a pop-up restaurant?
It was always our intention to open an actual restaurant, but it took time to get everything ready.  So my partner, Hoon [Kim], and I decided to begin by doing a special Tapped! [pop up beer garden] event, as well as Food Truck Fridays at Bar Marco. Then we started serving sushi on the sidewalk in front of our restaurant in Bloomfield. That created quite a buzz.

How did you become so interested in Japanese cuisine?
It started because I was a vegetarian, and one of my friends convinced me to try sushi. It was the only “meat” I’d eat because I believe it is healthy and fresh. At that time, I was working at a restaurant downtown, where sushi is on the menu because it is popular — but they weren’t necessarily striving for authenticity. So I took it upon myself to learn how to do it right. Then I worked at Tamari, where I continued to learn. At Fukuda, the sushi, sashimi, maki and nigiri sushi are all as true and authentic as possible. The other food is more Japanese-based, laced with my own creativity.

So are you a self-taught chef?
No, I graduated from Le Cordon Bleu here in Pittsburgh, but there I learned mostly French-based cuisine. My work experience and self-teaching has helped me to learn about other cuisines and preparation techniques. When I started college, I was studying pharmacy; I always liked mixing things and working in a lab, hands on, just like cooking. When I cooked with my college friends, there was an air of happiness. I learned a lot from my chef friends, too.  Eventually, I left college to go to culinary school — and then everything clicked.

What advice do you have for home cooks looking to expand their culinary repertoire into Japanese cuisine?
Watching a sushi chef, teppanyaki chef or even Japanese street-food vendors express their level of skill with fluid movements, unparalleled efficiency, and their elegant and cheerful style makes people fall in love with the cuisine.

What specialty products do you use?
I like koshihikari Japanese short-grain rice from California. When grilling, I use a combination of hardwood charcoal and Japanese binchotan, which costs $50 per pound but gives the food an authentic flavor. I also love my Aritsugu knives. Japanese knives have more fragile edges, so they are a little harder to care for — but they give you a sharper, more accurate result. I gave my grandmother, who is an amazing cook, a very sharp, small Japanese knife and she can’t believe how much easier it is to cut things.

Which ingredients would you advise the average cook to always keep on hand?
Invaluable ingredients for Japanese cuisine would be: soy, sake, mirin, kombu, katsuobushi, short-grain rice, soybeans and sesame. These are the basis for countless Japanese classics.

This article appears in the May 2013 issue of Pittsburgh Magazine.
Categories: From the Magazine, Restaurant Reviews