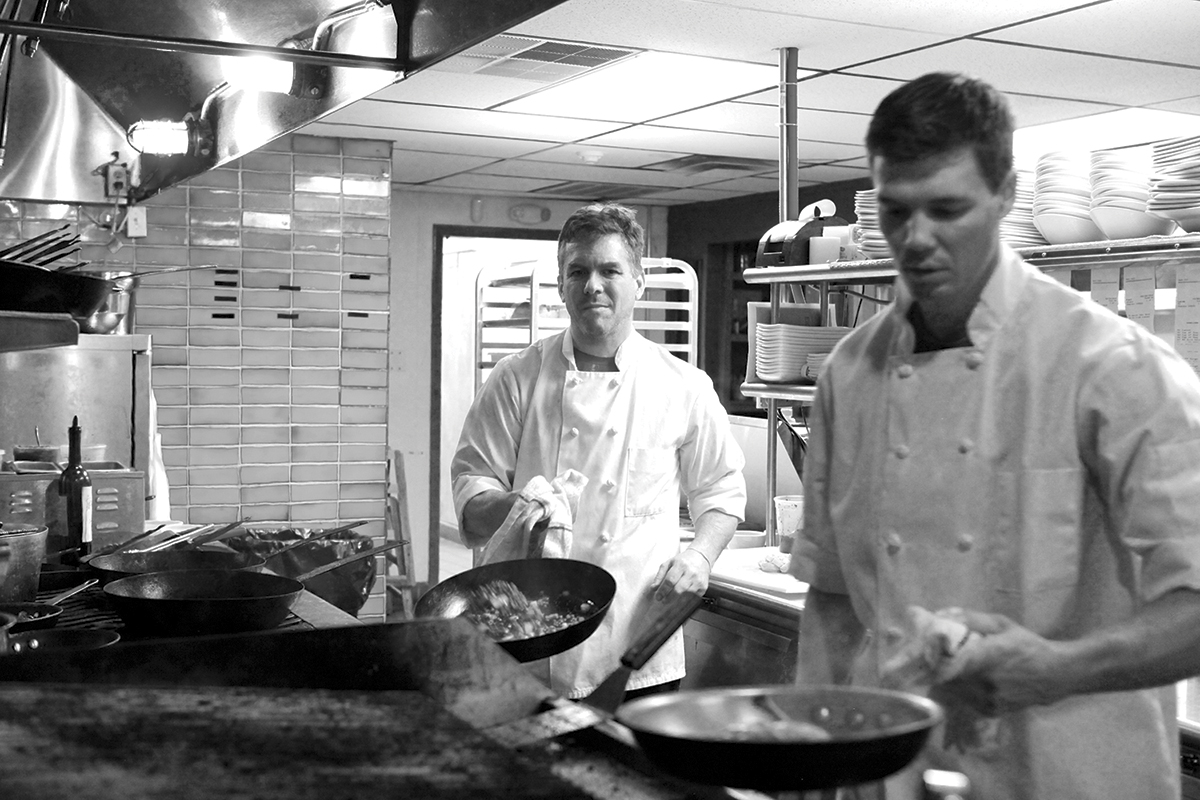 After nearly 20 years of commuting into Pittsburgh from the eastern suburbs to dine out with his wife on his days off, Don Winkie, former executive chef of The Tuscan Inn in Allison Park, decided it was time to give the area a high-quality destination restaurant. Winkie wanted to meet the needs of both suburban residents and city diners who want to get away from town for a night out.

Located 14 miles from the East End, Eighty Acres Kitchen & Bar occupies a surprising location in Plum: After passing a series of strip malls and turning onto New Texas Road from an intersection populated by fast-food joints, you will drive up to the hill and find Eighty Acres, a transformed building that formerly was a Vincent’s Pizza Park. 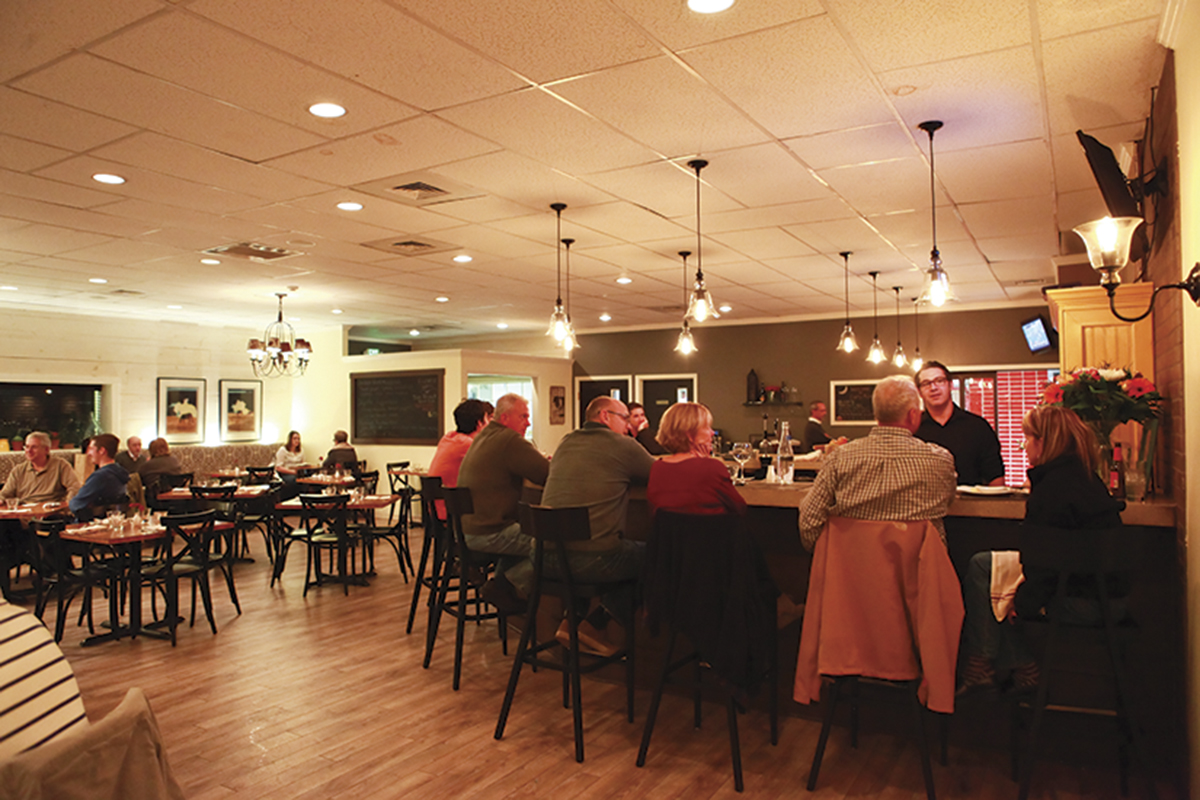 With help from Winkie’s family and friends, the interior of the restaurant has been wholly and artfully redone to include farm references such as rustic light fixtures, wooden floors and red barn doors. They retained the window into the kitchen from the original pizza shop, so when you walk in, you see the freestanding gas-fire oven and chefs working in a neat, bright environment.

The food at Eighty Acres is self-described as “American contemporary” and includes something for everyone: hangar steak, salmon, vegetarian entrées and the like. What all the food has in common is the freshness of the ingredients, sourced locally when possible — plus an extremely finessed touch in the preparation. For a nice change of pace, nothing at Eighty Acres is too fatty, too salty or overcooked. It truly reflects a farm-to-table approach, where the ingredients are the focus.

The menu changes seasonally, and the place is open for lunch, dinner and Sunday brunch. You also might drop in to sit at the unassuming bar, where you can try interesting cocktails and “snacks.” The bar program is a joint effort between Winkie’s wife, Amy Schlonski, the restaurant’s bartenders and Sous Chef Alan D’Angelo, formerly of Restaurant Echo in Cranberry Township. As is the food, the bar menu is seasonal. For example, in the summer, you might indulge in the housemade sangria ($8), light, white and bubbly with fresh berries.

A terrific snack that is not to be missed is the shrimp corn dogs ($8), large shrimp on a skewer, lightly fried in a cornbread batter and served with a spicy housemade remoulade. Another good snack is the scrumptious, creamy queso dip ($10), which features melted fontina cheese, crumbled chorizo and slightly spicy roasted poblano peppers, served with warm flatbread straight from the oven. 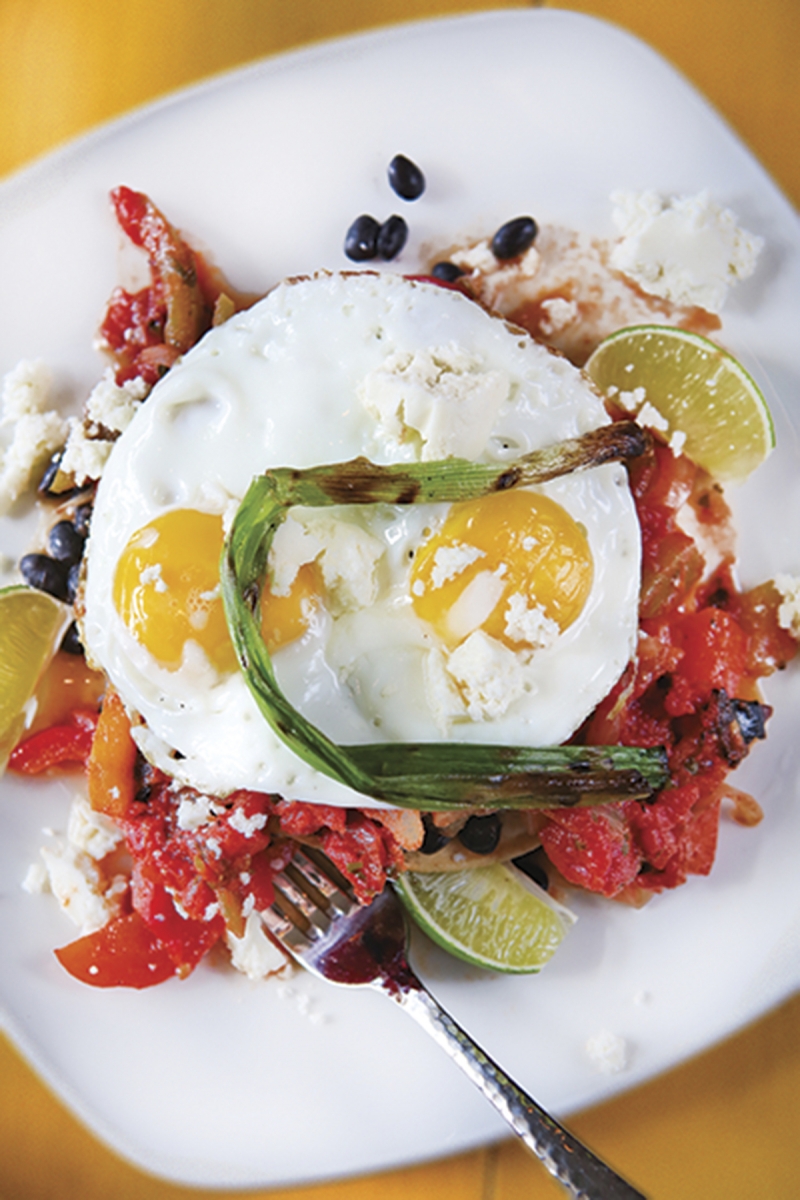 The most popular dinner entrée is the crab cakes ($25), with an old-fashioned, finer consistency that’s creamy and crabby; they’re also served at brunch ($12). The popular Sunday brunch features housemade baked goods and rustic, savory dishes, such as the signature shirred eggs ($9) — two eggs on creamed spinach, Yukon potatoes and aged cheddar, layered in a ceramic dish and baked in the gas-fired oven. 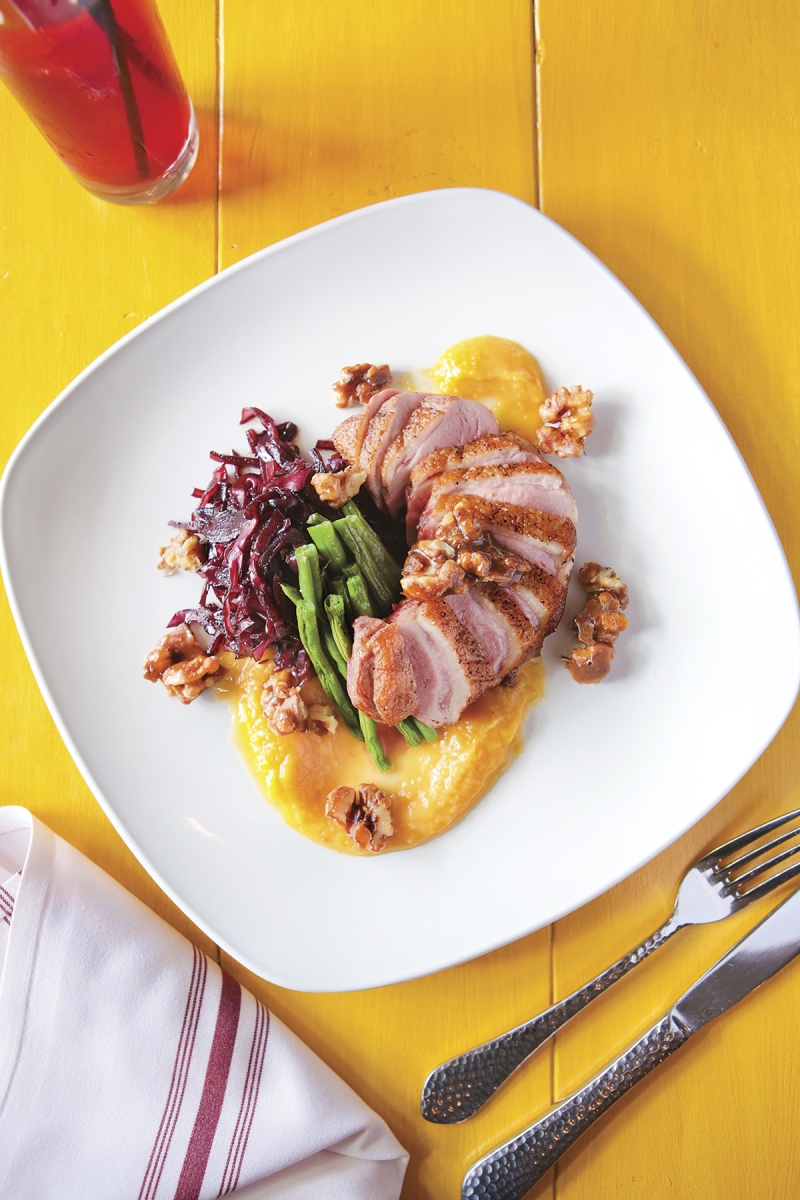 For the meat lover, try the flat-iron steak ($23), traditionally served with creamed spinach, roasted potatoes and a mushroom tapenade, or the Eighty Acre buffalo burger ($14), cooked to your liking and topped with aged cheddar, bacon and a dill-pickle aïoli. Not to be outdone by the meat dishes, there always are one or two vegetarian selections. I tried the grilled portobello ($12), now served at lunch and brunch, with caramelized vegetable quinoa (reminiscent of vegetable fried rice) accented with a light, flavorful lemon aïoli.

Desserts ($7) are either made in-house or sourced from Spinola’s Bake Shop in Murrysville. The housemade desserts are simple and homespun. For example, the crème brûlée is classically prepared with no embellishment and served in a round ramekin. The housemade summer shortbread is buttery, crumbly and topped with berries and fresh whipped cream.

Going forward, those of us who live in the city now will be making a “reverse” commute to Plum to enjoy a pleasant dining experience at Eighty Acres. 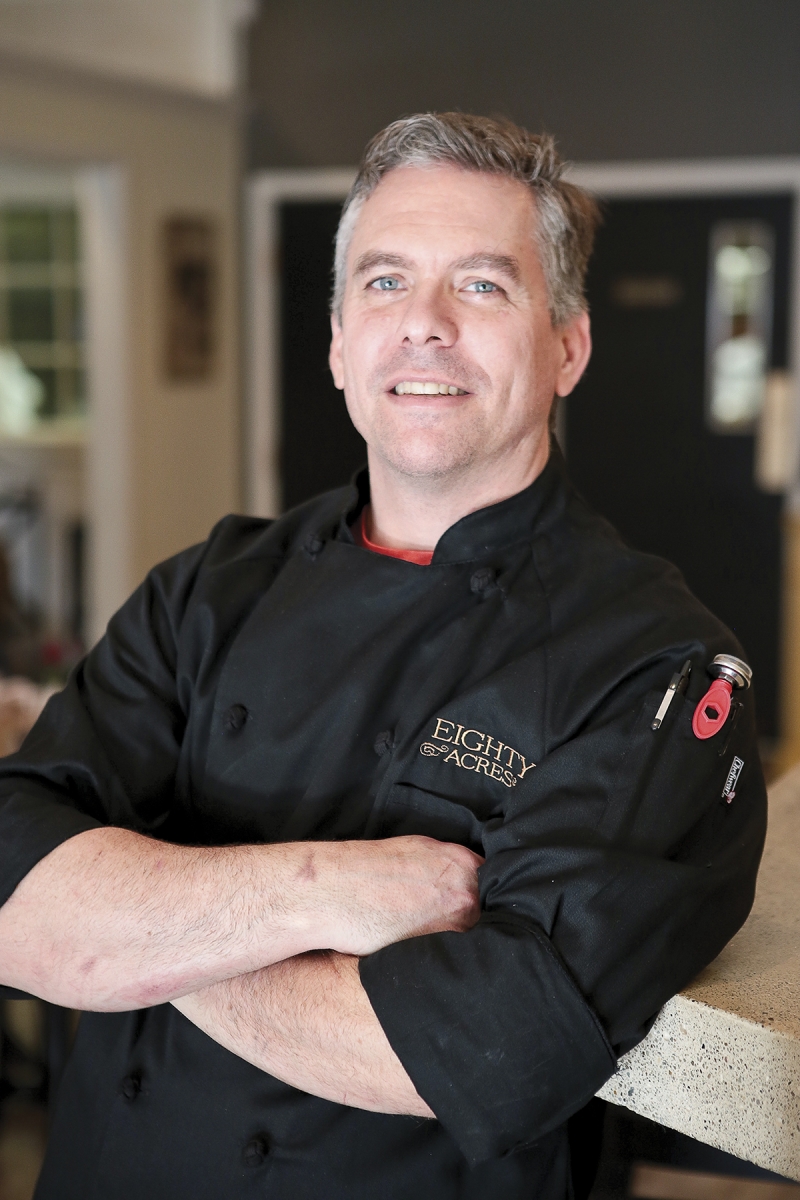 Why is your restaurant called Eighty Acres?
The name is in homage to my dad, who passed away three years ago. My dad was in the military most of his career and did two tours of duty in Vietnam. When he retired, despite being legally blind and deaf, he decided to become a farmer. He and my mom bought an 80-acre farm in western Missouri, north of Kansas City, where he raised 400 head of goats. Over time, he became known as the “goat man.” My mom still resides on the farm but leases most of the land to other farmers now.

How have you advertised the restaurant so far?
Honestly, we have done so little advertising. We put a little bit of advertising in the local paper, but it’s mostly been word of mouth. My son is 19 and just graduated from Gateway High School and intends to go to culinary school. I think every single person at the high school knew the restaurant was opening, and most of our family worked on the rehab, so we had a lot of local friends and family show up in the first few weeks. Now, the word is spreading, and we are getting more and more foodies from the city and from all over really.

What kind of crowd are you getting?
One thing I really want for this restaurant is for it to be welcoming to everyone. So I am very happy to see people with tattoos, state senators, retirees and kids. I want everyone to be comfortable here and for it to be a very friendly environment. I think customers really want to know whom they are giving their money to and who is preparing their food.

How do you feel about this moment in Pittsburgh culinary history?
This is truly the moment to be part of something new. When I moved here from Las Vegas 18 years ago, I was shocked at how dead the restaurant scene was at that time. It was just at the time that big Burrito [Restaurant Group] was getting started, and they were really the beginning of the changes in the food scene here. One thing that’s been awesome . . . is that the birth of so many great restaurants has also led to all these cottage industries popping up to provide products [such as] honey and handmade pasta to the restaurants.

This article appears in the December 2014 issue of Pittsburgh Magazine.
Categories: From the Magazine, Hot Reads, Restaurant Reviews