The team behind this (fairly) new Lawrenceville eatery focuses on using “extra local” and seasonal meat and produce, prepared in traditional ways. 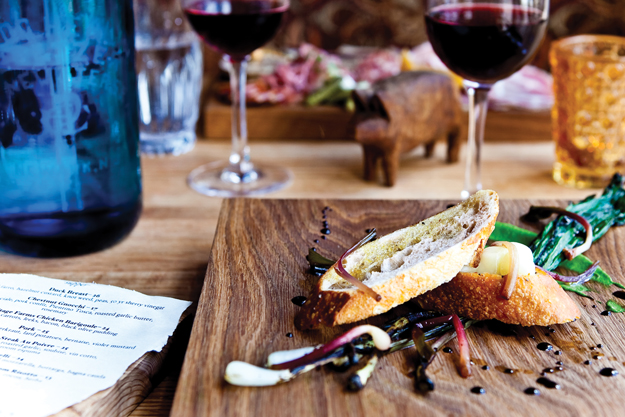 Justin Severino, chef/owner of Cure, could write a book about his values related to food production. So then Cure is more than a restaurant — it’s also an expression of Severino’s dedication to ethical farming practices, humane animal husbandry, sustainability and traditional food-preparation techniques.

“It has always been my goal to own a restaurant that reflects my ethics and morals,” he says. “I want to encourage people to know where their food comes from and to respect the hard work that goes into raising food.”

At Cure, the age-old idea that no part of the animal should be wasted is alive and well.  For a wide variety of curing, smoking and processing methods, Severino uses on-site equipment to produce a bounty of homemade delicacies, ranging from more predictable items like sausage and bacon to rarer items like crispy pig ears and blood sausage (a French-style sausage with pigs blood, fatty pork scraps, onion, rice, seasonings, eggs, brioche, cream and cognac). To ensure that each dish is perfect, he gets his meats from some fine local purveyors, including Penn’s Corner Farm Alliance, Otterbein Acres and Clarion River Valley Organics.

Severino’s background prepared him well for this undertaking: Born in Ohio, he later relocated to western Pennsylvania and then Northern California before returning to Pennsylvania in 2007 to be with friends and family.  While living in Santa Cruz, Calif., the chef owned Severino’s Community Butcher from 2004 to 2007, where he learned that he loved working with meats and owning his own establishment.  He credits his wife, Hilary, for being the brains behind Cure’s business side.

Having said all this, it comes as no surprise that the highlight of Cure is the Salumi platter ($26), truly one of the finest things you will eat in Pittsburgh — and reason alone to visit. 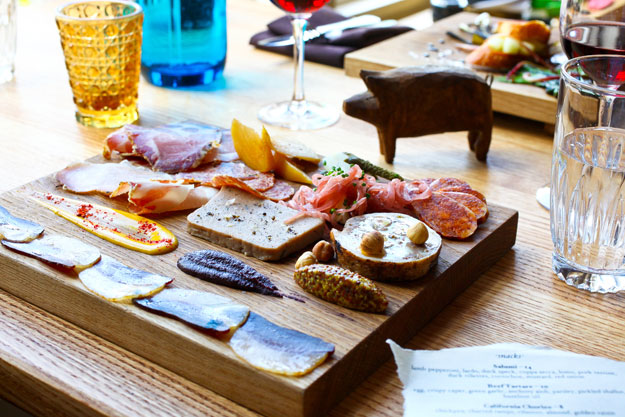 Another special appetizer is the beef tartare ($10), served with egg, capers, anchovy aïoli, pickled shallots and Bibb lettuce.  For years, I heard people complain about Japanese knotweed invading their yards — which is why I laughed when I saw it on the menu as an appetizer. The knotweed starter ($8), which was offered at press time, tastes like asparagus mixed with a root vegetable, and is grilled and served with pickled ramps, creamy taleggio fondue and a soft egg.

Vegetarian selections aren’t typically offered because Cure is really all about the animal.  As far as meats go, you can choose from lamb, duck, chicken, beef or pork — and none of them will be a mistake.  I enjoyed the Duck Breast and Sausage ($26), featuring small slices of flavorful duck cooked to medium, served with a housemade spicy sausage on a bright-orange carrot and hazelnut risotto with pea pistou and harissa lebneh (a spicy yogurt-based sauce).

In general, the dishes at Cure include a generous amount of fat and salt. Because Severino and his crew make everything in-house (and the restaurant has a weak ventilation system), patrons sometimes leave smelling like meat fat.

A sweet dessert is available most nights, along with the splendid cheese platter. I tried the chocolate soufflé cake and the butternut squash tart; although both desserts are made with high-quality ingredients, they weren’t as good as they should’ve been. Instead, choose the Farmstead Cheeses ($10 per person) to finish things off; three well-chosen and perfectly ripe cheeses are accompanied by crostini, local honey and nuts.

At Cure, the space fortunately matches the cuisine: Severino and friends designed, gutted and built out the eatery’s space. The result is a homey farm feeling, complete with an original tin ceiling and a wall covered with horizontal slabs of 200-year-old barn wood. The décor has a few amusing touches, such as a sculpture of a pig and meat hooks for hanging coats.
Although it’s closed most Sundays, Cure sometimes hosts “collaborate chef” events, where Severino cooks dishes with famed local chefs.

Cure is a restaurant of our time, a time when we care about the environment, the ethical treatment of animals, eating “clean” and our connection to our food. 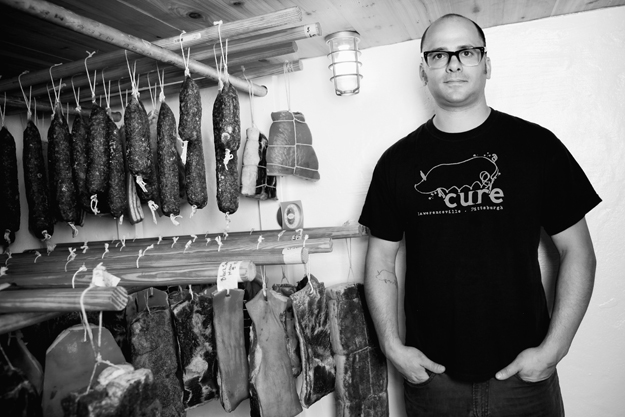 What’s it like working in western Pennsylvania versus California?
Even though I was successful [in California], Pittsburgh is a place where you can afford to own your own home and live a nice blue-collar lifestyle. Also, I feel like food ethics is a very commonplace topic in California but a relatively new topic here; it’s fun to watch these ideas grow. The only challenge of living here is doing seasonal food, since there are fewer choices in the winter months. That’s why my menu mostly includes meat and root vegetables in the winter.

Do we have good livestock here?
Everywhere you drive in the countryside around Pittsburgh, you see pigs, cows and chickens. I’ve been super impressed with the farmers here; there are so many young, passionate people. I want to know the person who raised the animal, and know the animal’s lifestyle and history. I love the food community here; the farmers, chefs, even food writers — we should all be working together to support each other.

What do you think about the health issues surrounding eating meat and meat fat?
I live a healthy life. I eat in moderation, and I exercise. But I believe that our health is supported by fat, if it is high-quality fat. We are omnivores by nature, and all the communities and civilizations that came before us had meat fat in their diets. I recommend a book called Nourishing Traditions by Sally Fallon, written about this topic.

Cure is a little off the beaten track. How did you choose the site?
I like the 10th Ward [of Lawrenceville] because it’s cool, but it hasn’t really been discovered yet. There are a lot of new businesses opening up. It’s fun to see things happening.

What advice do you have for the home cook?
Know where your food comes from. Is it from the U.S.? Is it local? I have a boar’s head hanging in the restaurant, and some people thinks that’s gross. But when it comes to meat, if you can’t look at it, don’t eat it. You have to understand that meat doesn’t come from a Styrofoam container in the grocery store. It was an animal, and you need to have respect for the animal you are eating.

Watch: Go Behind the Scenes at Cure

This article appears in the July 2012 issue of Pittsburgh Magazine.
Categories: From the Magazine, Hot Reads, Restaurant Reviews