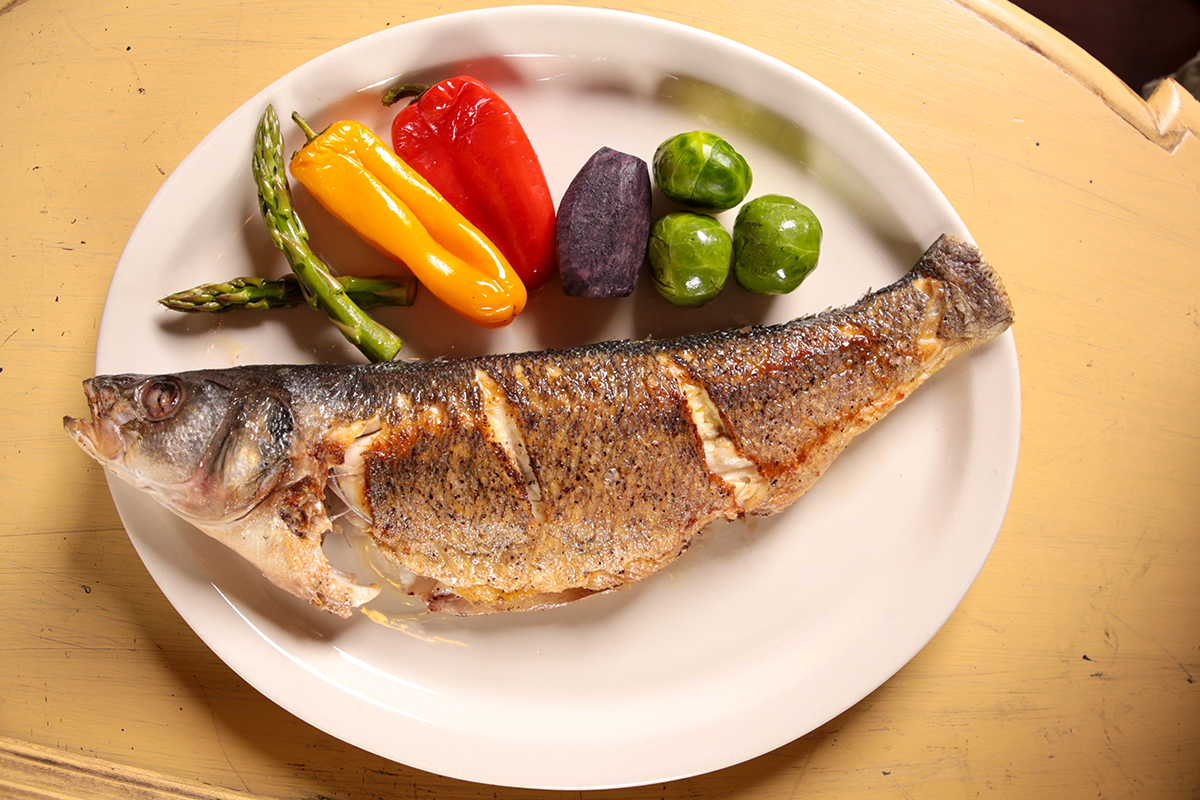 Café Zinho has re-emerged as a showcase for award-winning Executive Chef/Owner Toni Pais’ cuisine. After arriving here in 1978 from Portugal, Pais in 1992 opened Baum Vivant, which our independent Restaurant Review Panel named Restaurant of the Year for eight years consecutively; it closed New Year’s Eve 2006.

Pais established Café Zinho in 1997, as well as Café Zao, which he operated from 2004-2010. As he turns 60, Pais focuses solely on Café Zinho, for which he does the daily shopping and cooking, making each diner’s experience all the more special.

Around 2005, the chef/restaurateur started to exhibit symptoms of Parkinson’s disease. Following his diagnosis, he managed his illness with medication, although his ability to use his hands for his craft declined over time. In August 2012, he underwent deep brain stimulation, a surgical procedure that helps to control impulses to the brain. The surgery had dramatic results, enabling him to get back into the kitchen. Sporting his signature baseball cap and warm smile, Pais is back to wielding a knife and sauté pan like a pro. 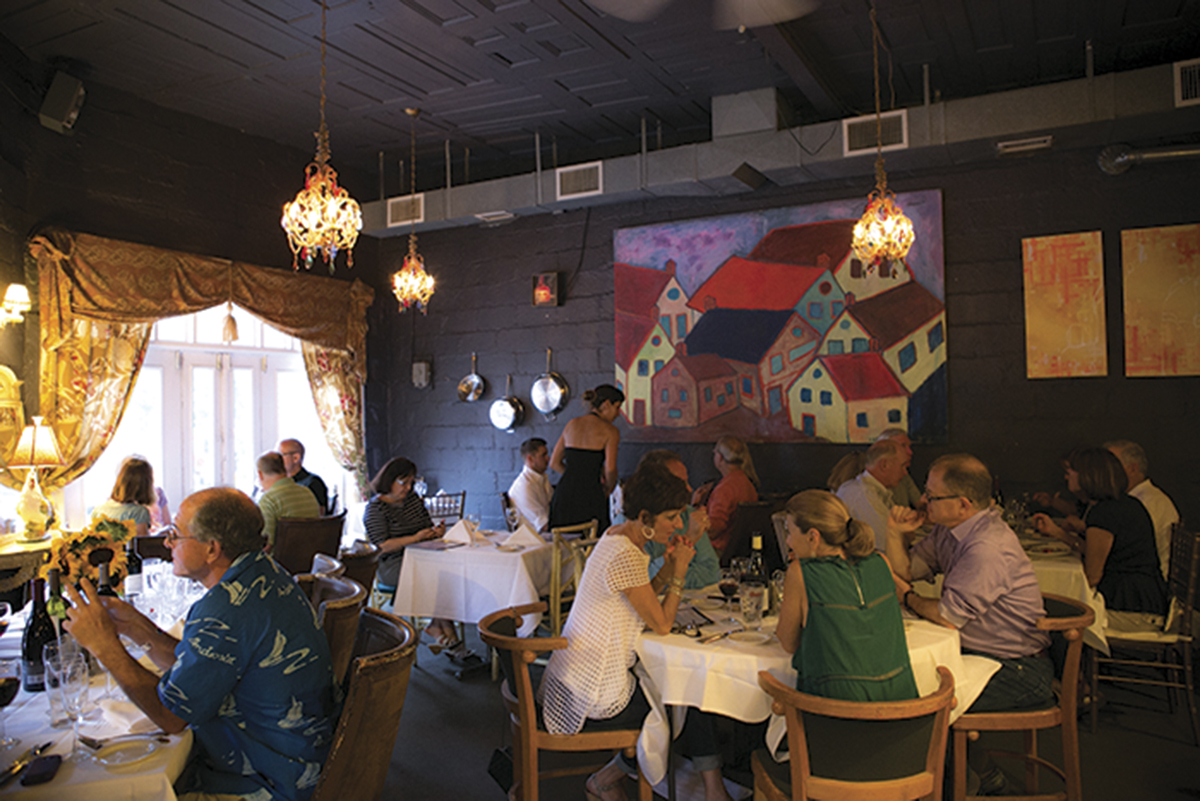 The interior of Café Zinho is bohemian and eclectic, with orange and brown walls, funky lampshades and bright, vibrant art. In contrast, the white tablecloths match the fine-dining-level fare.

The Mediterranean dishes give off a Portuguese flair. Pais describes Portuguese food as the original “fusion” food because it marries so many influences. Café Zinho’s creations always are classical, flavorful and straightforward. This is not a place for trendy foams and gelees; instead, it is a place offering dishes with tomatoes, peppers, herbs and traditional sauces. These meals are best with wine, so bring a bottle to this BYOB establishment.

Waitstaff deliver a loaf of slightly sweet, warm Portuguese corn bread to each table; you will need the bread to soak up the broths from your meal. The soup of the day ($6.95) remains worthwhile, no matter the choice. An interesting new menu item is the chilled coconut milk, lime and kale soup, which is refreshing and nutritionally dense.

Starters are wonderful. The crab gazpacho (or campachano, $9.95) is packed with veggies, shredded crab and chunks of avocado; it’s garnished with shrimp. Pais pan-sears chicken livers ($8.95), which are caramelized with apple cider and bacon lardoons; they’re decadent, sweet and unique to Café Zinho. On the lighter side, the clams cataplana ($10.95) are served in an aromatic white port tomato broth with accents of spicy sausage.

I have enjoyed every entrée I’ve had at Café Zinho. The signature Portuguese seafood stew, or mariscada ($29.95), is the preferred dinner for Pais’ wife Becky, his longtime business partner. It is cooked perfectly; for the tomato and cilantro broth, you’ll want to use your spoon and bread to get every last drop. 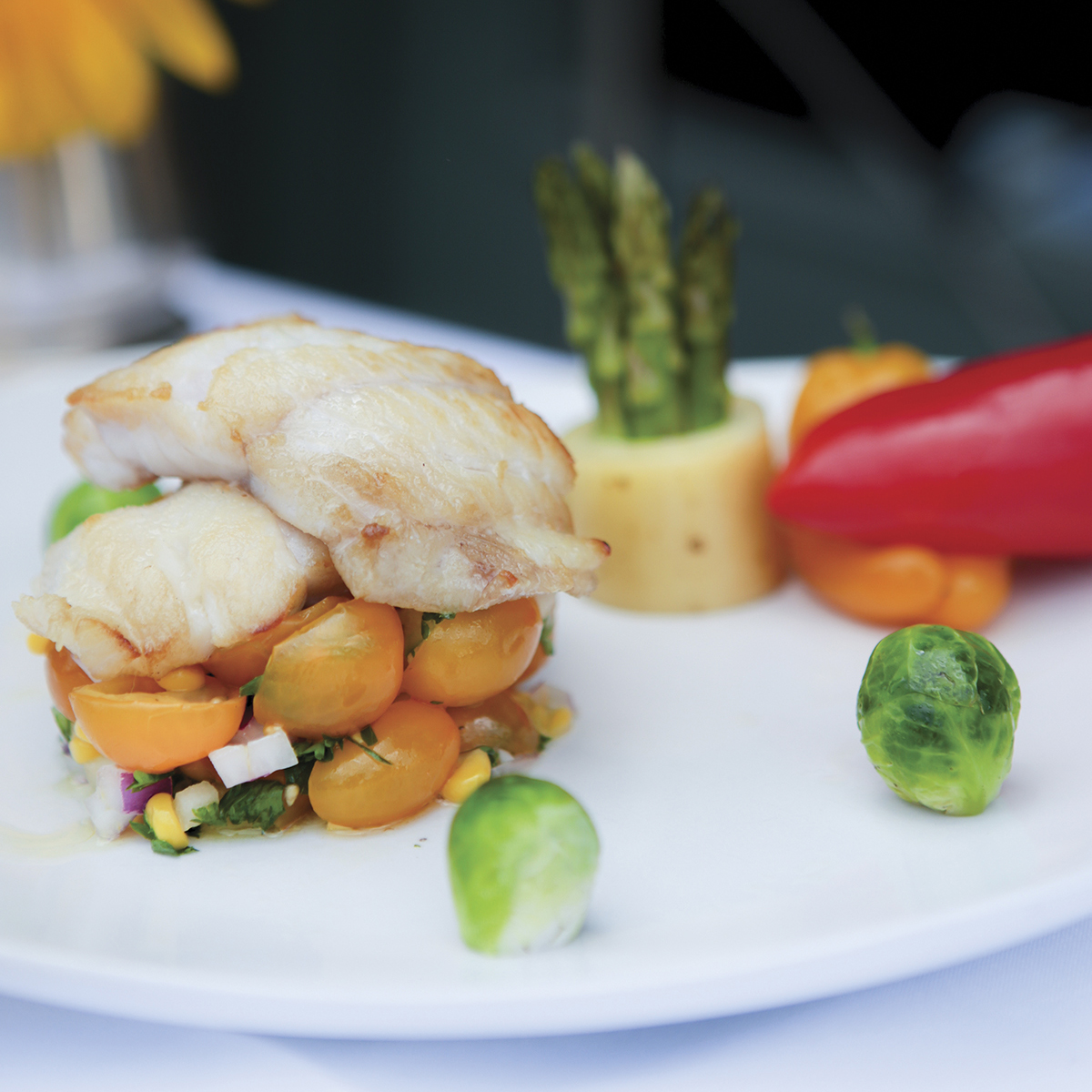 Pais’ culinary experience is evident in his artful technique and ability to manage the way heat is applied to each protein. For example, the whole branzino ($28.95) has a perfectly crispy skin contrasting the tender flesh. Similarly, the roasted duck ($28.95) features a leg and breast with browned crispy skin — yet it has a nicely cooked interior and is set in a pineapple-caramel rum sauce.

Two simple successes are the salt- and pepper-seasoned petite rack of lamb ($36) and the flounder special ($26), which is lightly dredged in breadcrumbs. Most entrées come with a thick-cut potato wedge and several vegetables.

Housemade desserts ($6.95) include chocolate mousse and Portuguese cookies layered with whipped cream and berries. Each treat is traditional and satisfying. 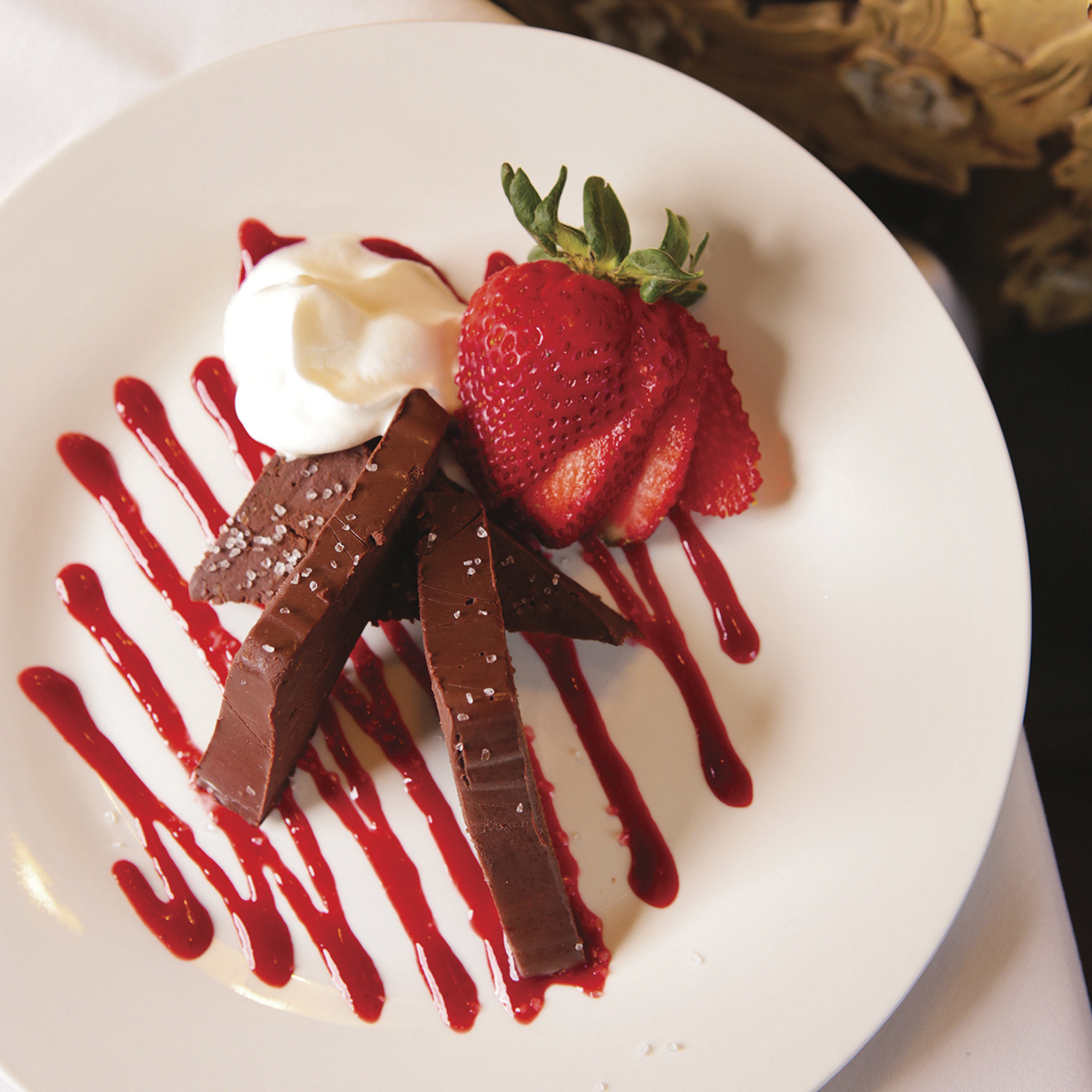 On May 31, Pais was honored at a Friends of James Beard benefit dinner at the Art Institute of Pittsburgh, where Mayor Peduto declared it “Toni Pais Day” in Pittsburgh.

“I was definitely overwhelmed!’ says Pais of the recognition. “It brought tears to my eyes to hear the mayor’s proclamation and see the reaction of all of those in the room. The dedication of the instructors and students was really inspiring to me.”

In addition, our independent Restaurant Review Panel named Pais one of Pittsburgh Magazine’s 2014 Chefs of the Year. Although his awards are legion, it is the warmth of Pais’ personality, leadership in the local culinary scene and commitment to his customers’ enjoyment that have earned him a place in our hearts. 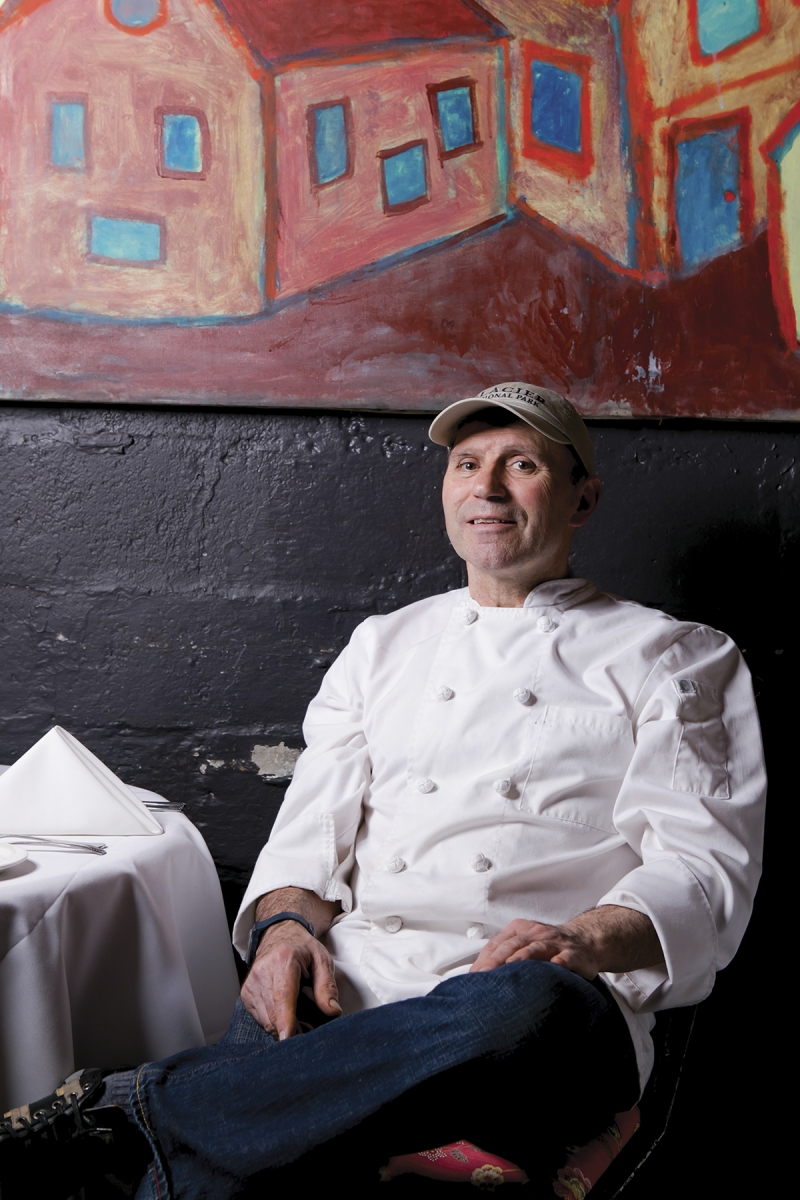 What was the food scene like when you arrived in Pittsburgh?
The food here was very dreary. You could order at restaurants without looking at the menu because all [of] the menus were exactly the same. At that time, it was really hard to get good food products, so I was always smuggling things like fois gras and unpasteurized cheeses in my luggage when I traveled abroad.

What food trends have you noticed throughout the years?
I saw nouvelle cuisine, which was overpriced small portions, and on the other hand, I saw the huge portions, like the 36-ounce steak. I believe in moderation. I think we have come full circle in that regard. In Pittsburgh lately, I am seeing more and more young professionals and people who have lived and traveled in other places; these people have a wider palate and will try anything.

What have you been thinking about recently in terms of your cuisine?
I am reading a lot of books about good health. My food has always been wholesome and natural, but I am enjoying experimenting with interesting healthful ingredients, such as turmeric, coconut milk and various vegetables. I am also studying the properties of raw versus cooked foods. It is apparent that if you eat well, your health will be better. I’ve recently introduced a dark-chocolate dessert terrine with chili powder; it’s both delicious and good for you.

With whom are you now working?
I have two wonderful people: My niece Becca Knee is my front-of-the-house manager, and she is doing a great job. I also have an assistant chef in the kitchen, Dounia Touil. I have worked for so many years with so many people that it amazes me that, at this point in my career, I have found a new, young person with whom I have such great cooking chemistry.

What is something you want people to know about you?
I am very proud of my association with the James Beard Foundation. I was nominated for the James Beard Chef of the Year — Mid-Atlantic in 2001, and I also had the opportunity to be a guest chef at the James Beard House in New York City in 1998 and 2005.

This article appears in the August 2014 issue of Pittsburgh Magazine.
Categories: From the Magazine, Hot Reads, Restaurant Reviews