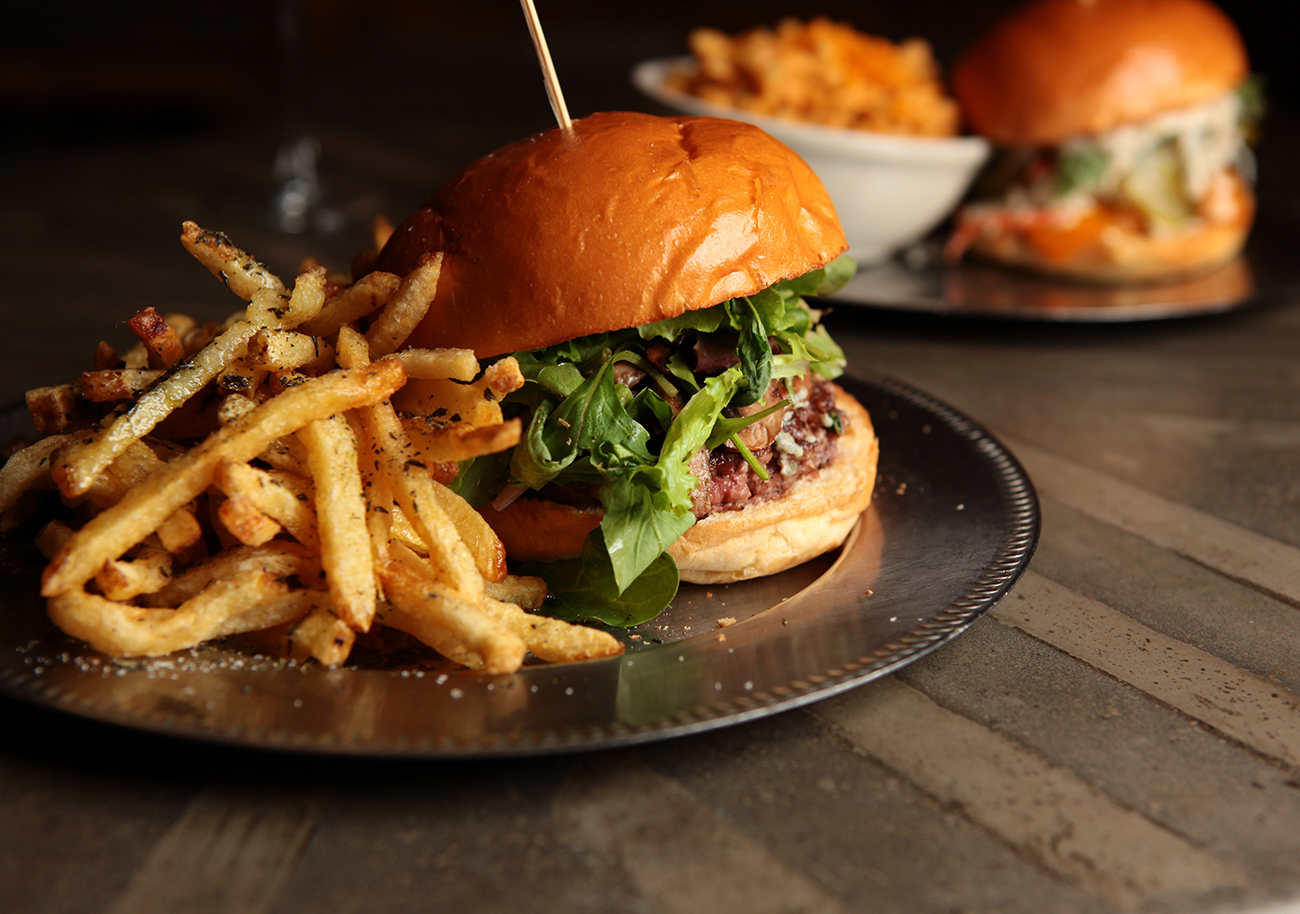 Nothing’s more fun than discovering a great place to dine in an unexpected location. That’s the case with Burgh’ers, an eatery in Harmony’s unassuming Creekside Plaza that specializes in organic, grass-fed beef.

Open since 2010, Burgh’ers has developed a following among a diverse group of people — families with young kids, local oil and gas “barons,” residents at nearby senior communities and hip city folks.

After walking inside, you are struck by the effortlessly trendy interior, classic ’60s rock playing on the speakers and the lack of sports on TV (instead, you’ll find culinary programming). You see then why Burgh’ers is not your run-of-the-mill strip-mall spot.

“Truly, I opened this place because I love burgers,” says chef/owner Fiore Moletz, a Shaler native. “There’s something about them; sometimes you just need a burger. But our restaurant is also farm-to-table. It’s important to me that my burgers [are] high-quality and healthy.”

Indeed, the burgers are fantastic, created with quality meat sourced from Armstrong Farms and topped with housemade condiments.

There are a number of pre-made burger combinations, including the Harmony ($9.99), topped with cheddar cheese, fresh horseradish, caramelized onions, jalapeños and barbecue aïoli; this choice packs sweet and spicy flavors. Another fun option is the rich, decadent Polish Hill ($9.99) featuring cheddar, caramelized onions, a fried housemade pierogi and mayonnaise. Vegetarians should enjoy the grilled portobello cap with onion, pickle, romaine, tomato and honey mustard. All patties are served on brioche from BreadWorks. 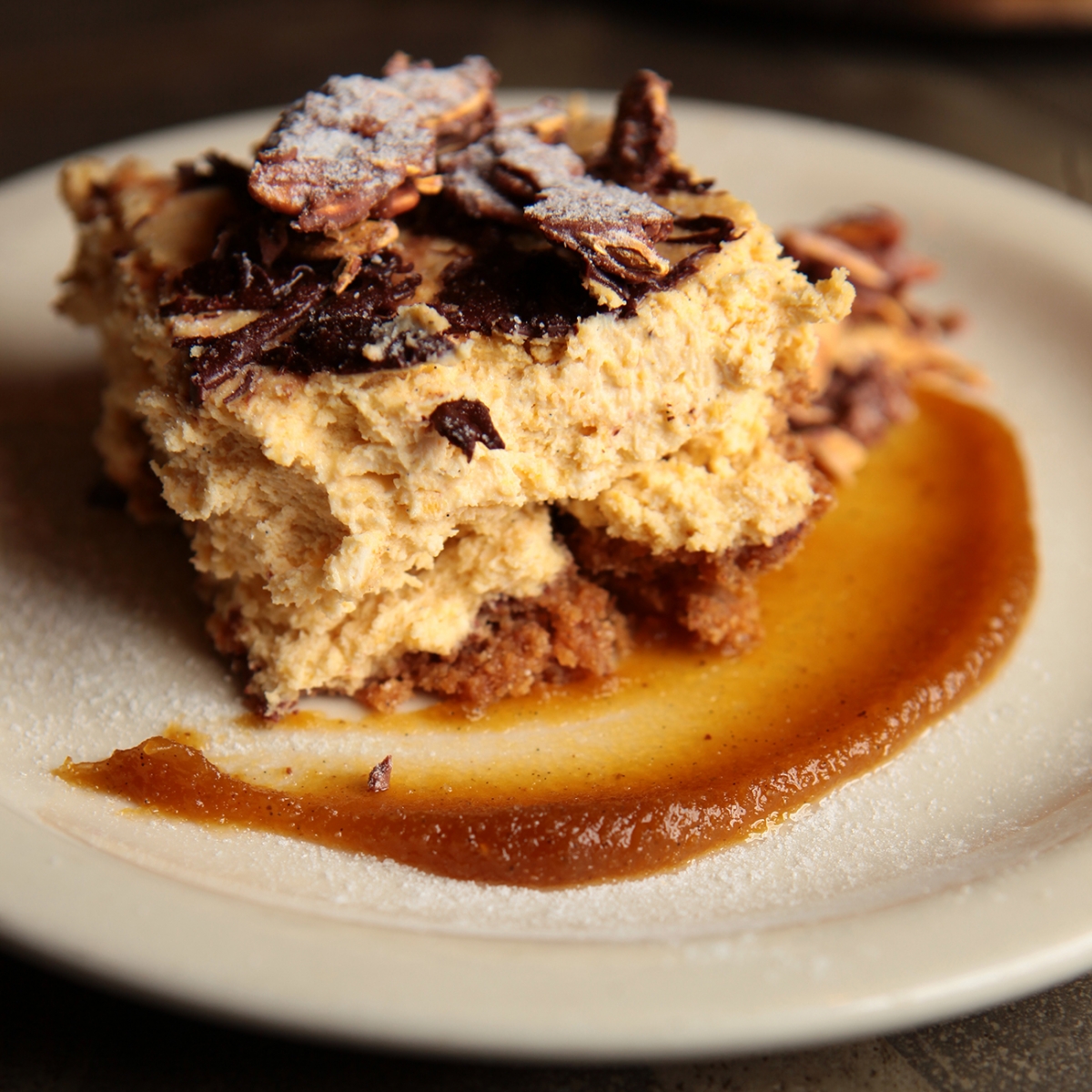 For those looking to indulge, Burgh’ers offers homemade desserts — including cheesecakes, cream pies and doughnuts.


If you would rather build your own burger, prices start at $7.99 for a regular (5 ounces) and $5.99 for a mini (2.5 ounces). Load up on free and low-cost ($0.75-$0.95) toppings, ranging from cheeses and condiments to avocado and grilled pineapple. Burgers come with your choice of mixed greens or “skinny” fries, which are thinly sliced and seasoned with salt and pepper; for an extra charge, you can get rosemary fries for $1, or mac ’n’ cheese or cole slaw for $2. The macaroni and mayo-based slaw are plain but satisfying.

Deviating from burgers, there’s the old-school chili-cheese dog ($7.99) with chopped onions, cheese sauce and beanless chili. Smith’s Provisions in Erie, Pa., supplies the beef-pork frankfurters. After that, if you have room left in your stomach, try the homemade dessert ($4-$6); options change daily but may include biscotti, cheesecake, cream pie or doughnuts.

Burgh’ers recently introduced Sunday brunch, which is assuredly worth your time. Among the Southern-influenced entrées is the plate of chicken and waffles ($9.99). Waffles are amped up with jalapeños and cheddar and topped with a light brushing of bourbon maple syrup; the lightly breaded chicken has a crunchy, spicy exterior and a tender interior.

Another winner is the shrimp and grits ($9.99), featuring a base of buttery grits topped with a half-dozen peppery shrimp and dressed with a nontraditional but yummy tomato cream sauce. The buttermilk biscuits ($3) are rich and flaky.

Get your burger fix by ordering the Morningside brunch burger ($9.99) with cheese, bacon and a “sunny” egg.

To complement the food, Burgh’ers is committed to offering local beers and craft cocktails. Brews on tap include varieties from Full Pint, Victory and Fat Head’s. Craft cocktails cost $8 and include the restaurant’s signature barrel-aged Manhattan made with Wigle whiskey and housemade bitters. On Sundays, there are also modern interpretations of classic brunch cocktails, including bellinis. Although I enjoyed the flavors I tried, each one contained too much liquor for my taste.

If you are in the neighborhood, try Moletz’s newest venture if you’re not planning to eat at Burgh’ers. Next door, Della Terra (Italian for “of the Earth”) serves food from various regions of Italy. “As much as I love Burgh’ers, I started to miss cooking a wider variety of foods,” says Moletz. So he hired experienced chef Josh Bonazza to oversee the kitchen at Burgh’ers while he cooks at Della Terra. “Our goal in everything we do is to give people the best possible meal experience with the most local, farm-to-table ingredients we can achieve,” says Moletz. 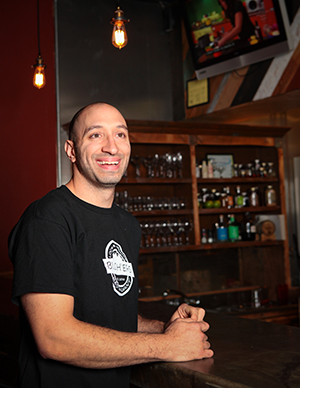 How does your place compare to other Pittsburgh burger spots?
[When] we opened, there were very few really good burgers in Pittsburgh. We opened around the same time as some of the other specialty places [such as] BRGR and Burgatory. Honestly, I enjoy eating burgers at all these places.

What makes your burger special?
We are truly farm-to-table. We have a very close relationship with our farmer, [whom] we call every Monday to discuss what we need; he literally butchers and ages our meat to order. When we started, we sat down and tasted all sorts of cuts of beef to get the mix we like. We use the highest-quality cuts to achieve both a buttery and grassy flavor.

What do you like about your location?
We originally were going to [set up] in Lawrenceville; however, we started looking around here [in Harmony] and realized that this is where the farms are located. In this location, we are only 20 minutes from our beef supplier, Armstrong Farms in Saxonburg. Our daily soups are based on what we get in our [community-supported agriculture subscription] from Kretschmann Farms, which is only a six-minute drive. We also get a lot of our other products from the Cider House Farm Market, which is less than a few miles away. In fact, I like being in the middle of farm country so much that my fiancée [former Burgh’ers general manager Michelle Fink] and I recently purchased a home in Prospect, less than 10 minutes from the restaurant, where we hope to grow produce.

You did not attend culinary school. How did you learn to cook?
I always loved to cook. I started working in restaurants when I was about 15 as a busboy. I had great experiences at Rico’s, Tambellini’s and Silvioni’s when I was younger. Then I worked at Lidia’s in the Strip [District] for five years until I became sous chef. There, I was mentored by my friend Craig Richards. I learned a lot from Lidia [Bastianich], as well as all the visiting chefs, [including] Mario Batali. I also worked at Il Pizzaiolo in Mt. Lebanon, where I was mentored by Ron Molinaro. I have been very fortunate to learn from so many talented people.

This article appears in the December 2013 issue of Pittsburgh Magazine.
Categories: From the Magazine, Hot Reads, Restaurant Reviews