Bar Marco heats up the Strip with serious wine and spirits, and high-quality food to match, inside the old No. 7 firehouse. 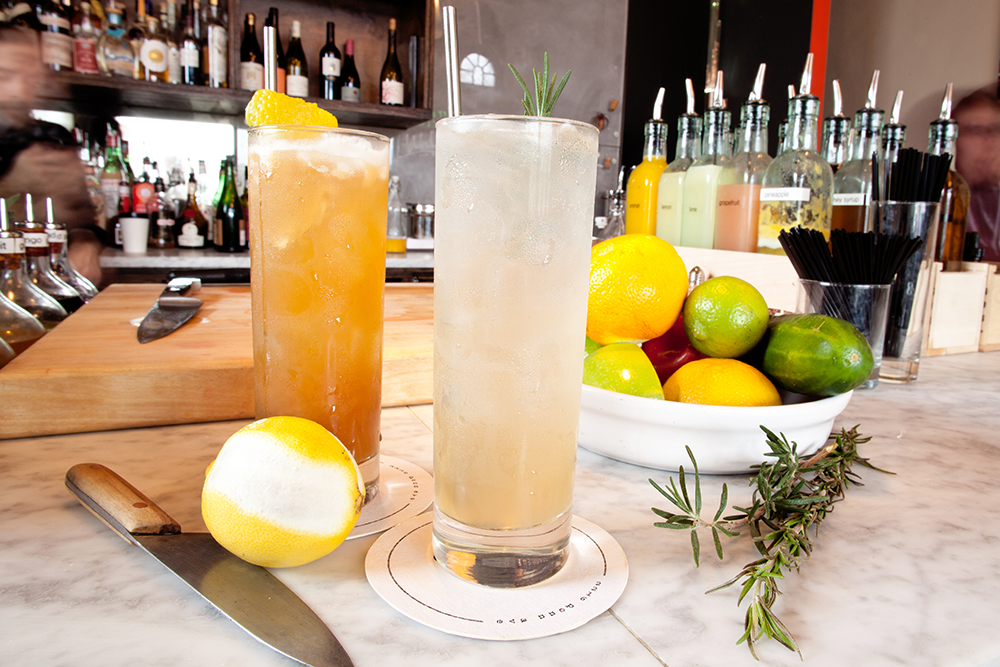 Bar Marco is a tale of Pittsburgh youth. Four friends grew up together in Greensburg, got educated, moved away, traveled, got serious jobs and then — at the ripe old age of 27 — quit and used their combined savings to commit to their passions: good food and drinks.

The four entrepreneurs — Kevin Cox, Bobby Fry, Michael Kreha and Justin Steel — have a variety of food and bar-service experiences, and three of them (all but Fry) share chef duties to varying degrees at Bar Marco. They rehabbed the historic 1860 firehouse themselves, removing previous additions, like partition walls and a glass vestibule, to reveal original features.

Gone are the dropped ceiling, dry-wall, sheet rock and flooring — exposing the original decorative tin ceiling, glazed brick and subway tile walls, and concrete floor. The guys also built the tables, shelving bar and back bar, and added some candles as well as a funky chandelier, creating a space that seems unfinished in a shabby-chic way.

Joining the four co-owners is Texan sous chef John Heidelmeier, formerly of Root 174, who can also be found in Bar Marco’s basement woodshop crafting kitchen knives from reclaimed wood (soon to be available to the public). Rounding out the team: Colin Anderson, the “rock star,” says Fry, behind the bar; and the servers, a bunch of plaid-shirted young men who are genuinely excited about the offerings. Even Lucy Nguyen, the Strip District’s venerable banh mi vendor, is now based out of Bar Marco’s kitchen. 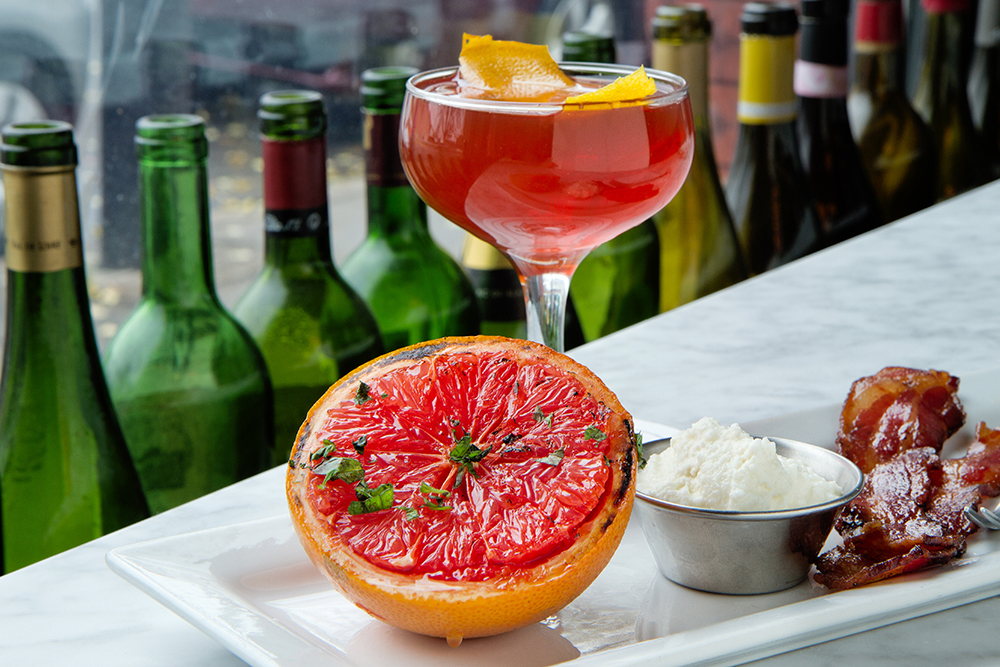 At this eatery, the bar is truly the focal point — and the cocktail menu is my favorite part.  Everything’s made from scratch — bitters, tinctures, juices and syrups. In general, I found the cocktails to be flavorful and made with a light, refined touch (with perfect garnishes, to boot). Drinks range from a traditional Manhattan ($12) to creative concoctions like the Vanilla Orange Thing ($10). The brunch menu (more on the fare later) also offers a spirited selection of mixed drinks, including an excellent Bloody Mary ($8).

Bar Marco staffers are serious about the wine program, and take pride in serving hard-to-find and “natural” (unfiltered) wines. Wine by the glass ($7-$16) is served in three-and-one-half ounce pours, and they’ll let you to taste several kinds before making a decision.

Despite the focus on drinks, the food is equally impressive. Because local ingredients are sourced daily, the menu changes often.  First off are the little $3 items; choose from five meats, five cheeses and five “things” (think honey or housemade preserves) to create a sampler platter. I had perfectly aged Camembert and delicious, finely sliced speck. On one visit, the baguette supplier (La Gourmandine in Lawrenceville) was on vacation, so Bar Marco instead offered tiny Middle-Eastern treats like curried naan bread.

Next up are the snacks, from which I enjoyed the tender smoked pork tamales ($10) and the seasonal garlicky bruschetta ($5) — perfect for when local tomatoes are in season.  Less to my liking were the bacon-wrapped dates stuffed with manchego ($10), which were light on the manchego and slightly burnt. 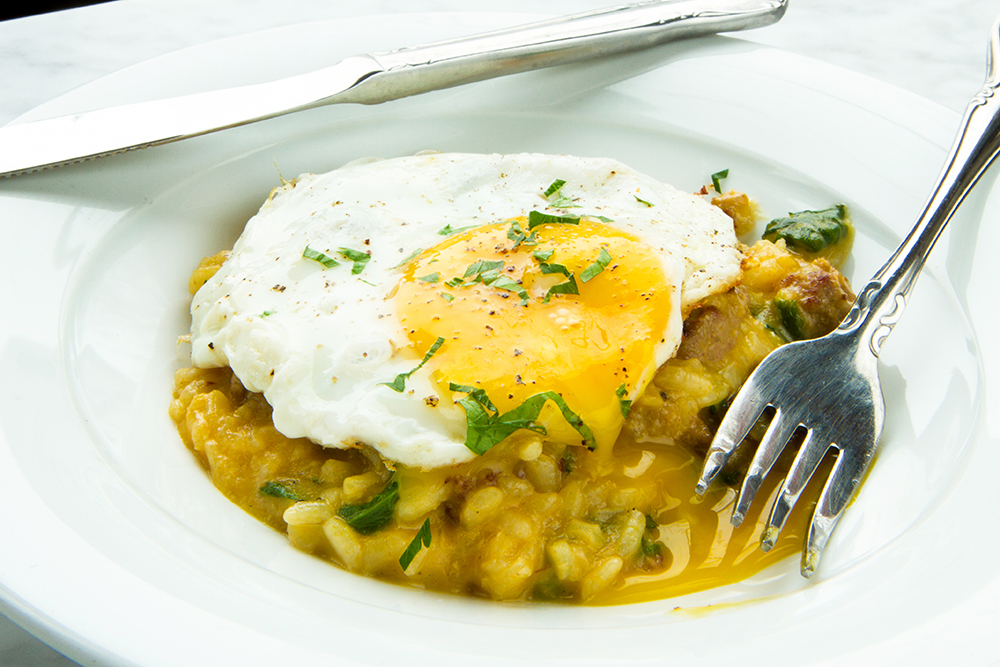 Although the entrées are a minor part of the menu (there may be three options), I thought they were among the best dishes I tried. The house-smoked pork shoulder ($19) was amazing, very tender and not fatty (and fortunately not drowning in a sweet sauce); it’s served with an excellent butternut-squash mash and braised greens.

Bar Marco does a rousing brunch on the weekend. One highlight is the broiled grapefruit half served with mint, ricotta and honey ($5), so simple yet so divine. The variety of offerings — including breakfast risotto of the day ($12), “a proper English breakfast” ($14) and French toast with housemade brioche ($10) — makes this place a fun brunch spot.

When it comes to dessert, you must try the rich panna cotta ($8) — it’s to die for — with a subtle lemon-mint flavoring; sometimes this treat is served with poached pears in port wine.

Bar Marco has a few qualities that are both strengths and weaknesses. When it’s busy, it is very loud; this is fun for times when I’m happy to lean over my mixed drink to talk to my companions but not right for every occasion. Second, the menu is spontaneously planned based on available products, which is admirable — but tough for consistency. That said, I really enjoyed many items — and I appreciate that the four co-owners care deeply about food and drinks but aren’t too hung up on convention.

Watch: Go Behind the Scenes at Bar Marco 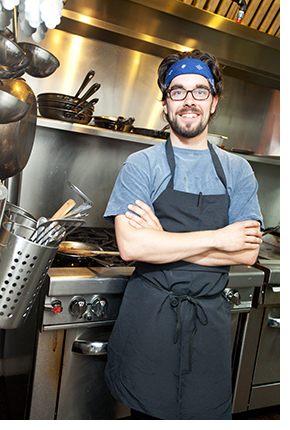 Do you think of Bar Marco as more of a bar or a restaurant?
Well, our idea was that Bar Marco would be like a European wine bar, just without the pretense. We wanted the more low-key feeling of a pub. We want the drinks and the food to be great — but the main thing is that people have a good time.

Who’s Marco?
Bar Marco is named in honor of my mentor, Marco Enrico, who has been at DeNunzio’s for many years. He has a beautiful home in Jeannette, where he has served us many amazing, elaborate Italian meals. He’s slowly adopted the four of us [co-owners], one-by-one.

The crowd at Bar Marco seems to be an interesting mix. Who are your diners?
It’s very accurate to say that we have a wide range of ages; the crowd changes at different times of day. We have some college-aged people who are looking for a more sophisticated experience than your typical bar. We have families who come for early dinner or brunch before a show or game. And then, after midnight, it becomes like a neighborhood bar — it’s a really lively scene.

How would you describe the style of the food?
I am really influenced by Italian food; however, our food lets the ingredients shine. Almost all of our produce is local, mostly from farmers markets. We are smoking meats in-house, and we canned, pickled and froze summer foods like tomatoes, corn and peppers for the winter; we really want to be versatile and prepare the food that is available. Recently, we had a guy come in with a really special bottle of wine; we made a few dishes that were not on the menu that went well with his wine. We just want everyone to have a great time.

What is your advice about cooking well?
It’s really about getting good ingredients. Know where your food comes from. It’s naturally delicious. You don’t really need do that much; it sort of takes care of itself.

What are your future plans?
In the spring, we are planning to create an outdoor courtyard that can host 60 people and have a community wood-fired oven. It will be open from the spring to the fall.

This article appears in the December 2012 issue of Pittsburgh Magazine.
Categories: From the Magazine, Hot Reads, Restaurant Reviews