Alma Pan-Latin Kitchen is a neighborhood gem that brings international cuisine to the East End. 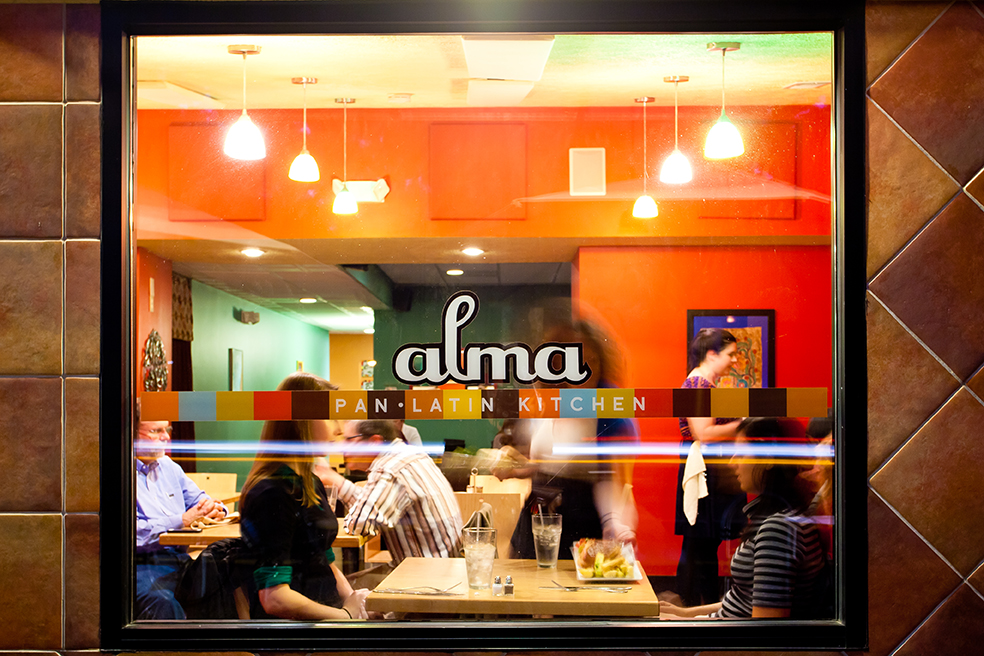 Alma offers a patchwork of cuisines from Central and South America, as well as the Caribbean islands, interweaving the flavors of countries like Peru, Chile and Colombia, resulting in a satisfying dining experience.

Now for the back story: In 2004, Jamie Wallace, owner of Alma (which means “soul” in Spanish), quit his job as a corporate attorney to open Abay Ethiopian Cuisine in East Liberty before it was the restaurant hub it is today.

“People thought I was crazy — but there was a line going down the block the day I opened Abay,” he recalls.

Wallace continued to learn about African and Latin cuisines, and he grew particularly interested in the story of Africans who landed in Latin America and the Caribbean.

“Many foods that came on slave ships — such as black-eyed peas, plantains and lima beans — became staples,” Wallace says.

So, the idea behind Alma is to give diners the opportunity to eat various Latin cuisines that share common African roots.

Wallace feels that the keys to a good restaurant are: fresh ingredients, great spices and a caring staff. Enter Charlie McKibben, a Pittsburgh native chef with extensive culinary experience, and new hire executive chef Carsten Vollrath. Having cooked in kitchens across the nation — California, Oregon, Florida and Pennsylvania — McKibben came in as Alma’s sous chef and moved up to head chef before Vollrath’s arrival.

“I have traveled extensively, and greatly respect and admire the cuisines of other cultures,” McKibben says. “Our food works because of our perseverance. We educate ourselves — and our chefs. We research countries and their foods, and we stick to what works.” 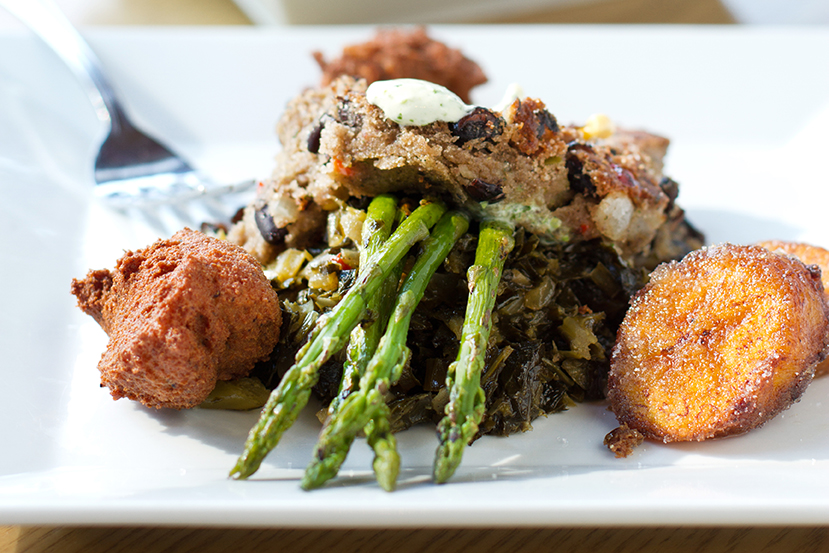 Alma, which opened in summer 2011, has truly hit its stride. Despite the breadth of cuisines, Alma’s menu is relatively small and lists the dishes by country of origin — except for those identified as “Alma,” which indicates in-house creations.

For appetizers, try the Empanadas del Dia (Chile, $7), featuring unusually delicate crust and various fillings.  The deceivingly simple Conchitas a la Parmesana (Peru, $9) is also delicious — scallops (in their shells) are topped with Parmesan, broiled and then finished with a spritz of lime juice. 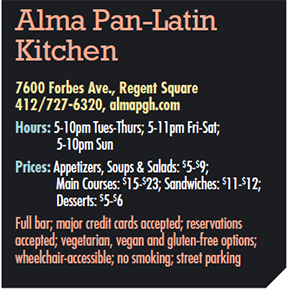 The Seco de Pollo (Peru, $15) is a fan favorite, with a half-chicken slowly braised in a flavorful (but not spicy) aji pepper sauce.  A lighter dish is the Camarones al Caribe con Ajo (Cuba, $21), offering large pan-seared shrimp in a housemade lime and garlic sauce. The Bife Steak Chimichurri con Gallo Pinto (Argentina, $22) consists of sliced, grilled and marinated skirt steak topped with a chunky chimichurri sauce. Some of the entrées are accompanied by a marvelous rice pilaf; in fact, I would recommend Alma for the rice dishes alone.

The sandwiches are made with perfect bread from nearby Wood Street Bread Co. The Cubano (Cuba, $12) is among the best I’ve had in Pittsburgh; it’s made with traditional slow-roasted pork, ham, Jarlsberg cheese and pickles. Another winner is the Sandwich de Carne Asada con Sofrito y Camote (Ecuador, $11), featuring slow-cooked beef with sofrito, a common Latin ingredient combining onions, garlic, chili, tomato and peppers.  The sandwiches are served with yuca fries — which, on top of being naturally starchy, were slightly undercooked.

With its own entrance, the cantina offers a cozy, casual bar scene. Drinks include the Caipirinha (the national drink of Brazil, $8), themed martinis and South-American beers by the bottle ($4-$5), as well as local brews (like East End’s Fat Gary) on draft.

Blue-gray and tomato-red colored walls, art from the featured countries, and world-beat music combine with the food to create a hip vibe that’s consistent with the cool crowd. Alma is located across from the Frick Park playground in Regent Square — but there’s ample neighborhood street parking; however, dining on the outdoor patio can be noisy.

Because of Alma’s intense focus on consistency and authenticity, it’s a place that will be around for a long time. 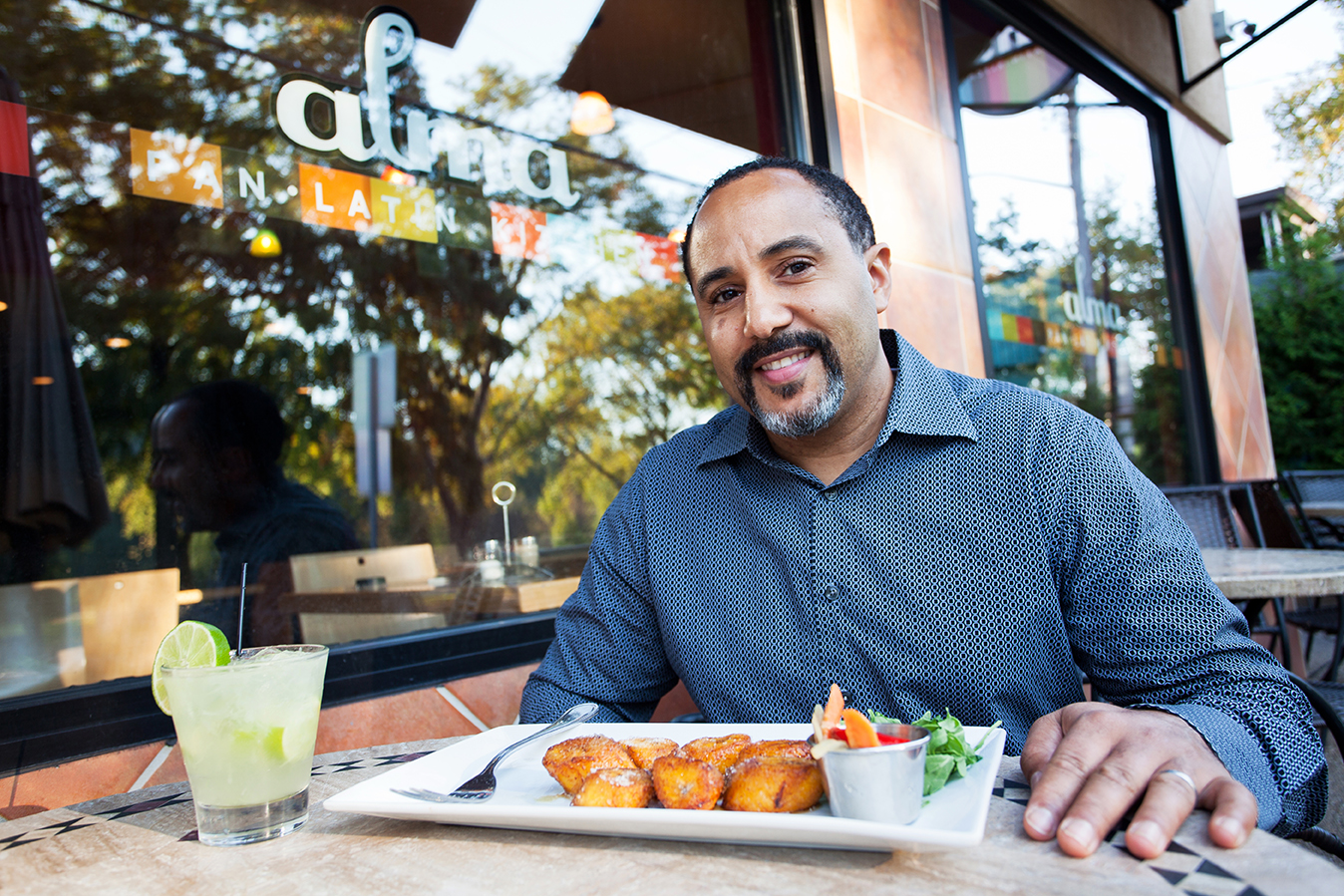 How did you get interested in African cuisine?
I grew up as an army brat so I traveled a lot.  After my first year of law school, I traveled and studied in Kenya and Tanzania.  That really solidified my interest in Africa.  More recently, I have found that the staff at Abay comes from all over the world including African Americans from the South, West Africans and Puerto Ricans.  It’s interesting to see how much their cuisines have in common and how much has African roots.

What was it like to open Abay in 2004?
At that time, I thought it was odd that we had no Ethiopian restaurants in Pittsburgh because there were ones in other cities that I had visited.  But opening an Ethiopian restaurant here was actually riskier than opening one in a place like Washington D.C., because we had a relatively small Ethiopian community to support the restaurant.  I was relying on people who weren’t Ethiopian wanting to try the cuisine. Also, at that time East Liberty was just starting to change. I was friendly with the people who did Shadow Lounge and Kelly’s and I wanted to be part of the cool and progressive future of East Liberty. So I quit my corporate legal job to open Abay. People thought I was crazy — but there was a line going down the block the day I opened.

How have things changed in the seven years between opening Abay and opening Alma?
Ten years ago, it would have been hard to run this restaurant because you wouldn’t have been able to get the ingredients. It’s getting much easier to get things, even within Pittsburgh.  In the early days of Abay, I had to get my spices from Ethiopia and DC.  But in general, the Pittsburgh dining scene has boomed in the last eight years.  And East Liberty has become hot.  I also have found that Pittsburghers have become more adventurous in their palates.

What are your goals for Alma?
The word “alma” means soul.  I want a place that has soul, a welcoming neighborhood place, where you could have a beer and some interesting food and hang out and relax.

This article appears in the November 2012 issue of Pittsburgh Magazine.
Categories: From the Magazine, Hot Reads, Restaurant Reviews