Peruvian cuisine, expected to be a mega food trend in 2012, lands in Squirrel Hill. 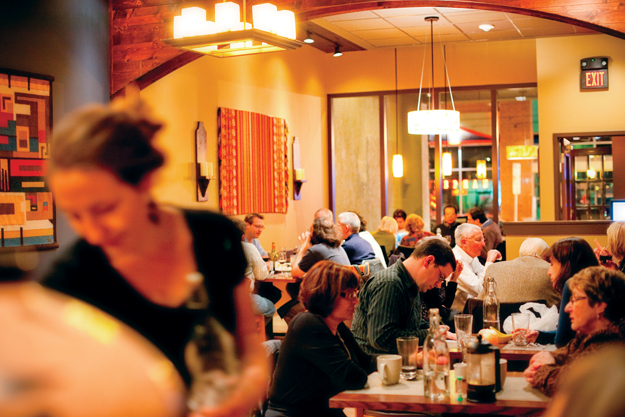 Though Ají Picante means spicy chili peppers in Spanish, you will find that this Squirrel Hill restaurant offers a wide breadth of flavors well beyond the spicy pepper. It’s a small, inviting restaurant that serves modern interpretations of traditional Peruvian cuisine.

Ají (pronounced “ah-hee”) Picante is owned by Gail Klingensmith and Pam Cohen, the pair behind the popular Pamela’s P&G Diners as well as La Feria Restaurant & Folk Art Shop in Shadyside.  Several people have asked where the door to Ají Picante is located.  That’s because the restaurant shares its front door (and kitchen) with the new, expanded Pamela’s site on Murray Avenue.  While Pamela’s is open for breakfast and lunch, Ají Picante only serves dinner.

To ensure a successful start, the owners recruited chef José Luis del Solar (originally from Peru) out of Chicago to be the opening chef.  Although he eventually moved to Pittsburgh from Lima, del Solar spent several years in between in Rhode Island, New York and London, where he pursued his diverse creative passions of photography, Web design and cooking.

Like many cuisines, Peruvian fare relies on the ingredients that are native to the country—in this case, seafood, potatoes, corn and peanuts.  But the food also reflects the many parts of the world that are part of Peru’s history, including Spain, China, Japan and Africa.  One example of the Japanese influence is that the tilapia used in the ceviche dish ($8) is sliced like sashimi rather than chunked.  This wonderful dish consists of fish marinated in lime juice and hot peppers that’s served with clams, mussels, glazed sweet potatoes and “cancha” (fried Andean corn kernels that taste like an earthy snack food).

The Torrejas de Choclo, aka crispy corn fritters, ($7) are seasoned with ají amarillo and cilantro, and served with guacamole, black Andean mint (“huacatay”) sauce, hot-pepper sauce and red-onion salsa.  Another wise choice is the Causa de Langostinos ($8): a blend of shrimp and avocado with aïoli, layered with mashed potatoes and served with olives and a quail egg.  (This delicious dish was served cold, but I would have preferred to try it at room temperature.) The salad ($6) changes daily but typically features a mesclun base with delightful variations of toppings—such as nuts, seeds and vegetables.

One of my top entrée picks, especially for winter, is the Chupe ($22): a Peruvian-style bouillabaisse with clams, mussels, calamari, octopus and shrimp in a tarragon seafood broth chock-full of vegetables, corn, lima beans and squash, and finished with a touch of cream.  This dish is large enough for two people to share.

Another one of my favorites was the Pollo a la Plancha ($17), comprising crispy chicken breast served over an ají Panca gravy with a potato, vegetable of the day and a fresh, bright-green chimichurri sauce. 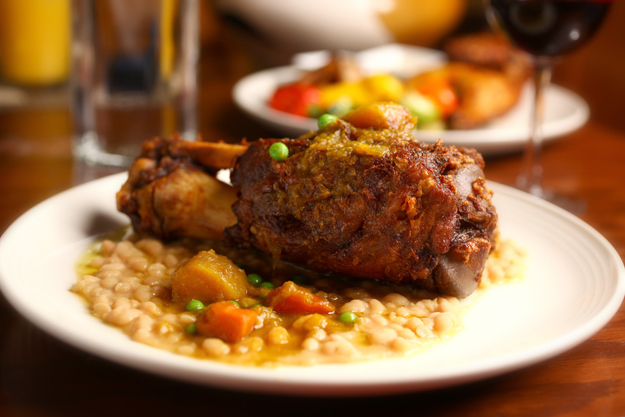 My least favorite entrée was the Lomo Saltado ($21): a traditional Peruvian, Chinese influenced stir-fry of steak, onions and tomatoes; I found this dish to be rather simplistic, with the tomato being an overpowering flavor.

Ají Picante is a BYOB restaurant (with no corkage fee, thankfully). But it’s a place where I would nix the wine and bring airline-sized bottles of liquor instead. There are some delicious beverages that would make for awesome mixed drinks.  The Chicha Morada ($5) is a fruity drink—almost like grape juice—made of purple corn, apples, pineapples and quince, and would mix nicely with vodka.  The Tamarind Mojito ($5) is packed with lime, mint and pineapple rind, and would be great with rum.

And to finish off the meal, I tried three of the housemade desserts.  I loved the luscious Arroz con Leche ($6): a warm coconut-rice pudding infused with orange zest and served with chunks of mango for texture. A lighter dessert is the Mazamorra Morada ($5): a healthy fruit compote made of purple corn, apples, pineapple, prunes, dried cranberries, apricots, cinnamon and cloves.  Weakest was the Suspiro de Limeña ($7), a Peruvian-style dulce de leche topped with a smooth whipped cream made with port wine, which I found to be cloyingly sweet. 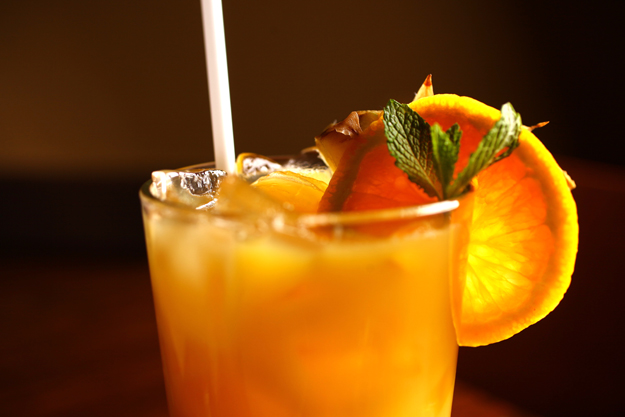 As far as diners go, there is a definite feeling that the folks who eat there also listen to NPR or WYEP; these people like to travel, even if it’s just for dinner.

The servers—some of Peruvian descent—remain enthusiastic and patient while repeatedly explaining the dishes and their ingredients. The interior is understated with a few well-placed pieces of Peruvian art and crafts on a slate-blue and light-wood backdrop.

As a sidebar, it’s worth mentioning that only a block away from Ají Picante is a newer addition to the neighborhood: Paititi, a delightful Peruvian arts and crafts shop filled with handmade jewelry and clothing. It’s official: Peru has come to Squirrel Hill. 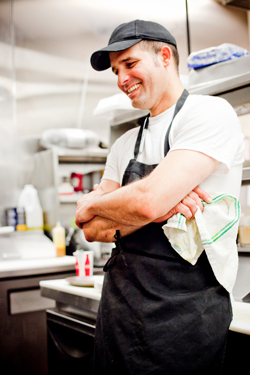 How long have you been in Pittsburgh?  And do you like it?
I moved here six months ago [from New York].  Pittsburgh is fascinating.  It has a terrible reputation because of its industrial past and I think that’s what makes it unique and interesting: The fact that it has a past that is so different from what it is now.  It’s a gorgeous city with a lot of culture and beautiful architecture.  It’s not one of those cookie-cutter cities.

Is there a difference in how restaurants are run in Peru versus here?
The labor is way cheaper in Peru, so you can afford to [prepare] many foods from scratch instead of buying things precut or premade.  The produce there is still muddy and full of dirt, but since you have the manpower to clean it, you can afford it. I think that’s potentially good because you are starting from zero, more from nature.

Can you find the ingredients you need here in Pittsburgh?
My purveyors are fantastic. They are amazing guys who can find me almost anything I can think of. [There are] some special Peruvian products I get from a purveyor in New Jersey—but for the most part, I can get what I need here.

What is something you would cook in the dead of winter for a dinner party?
I would roast a leg of lamb.  I lived in England for a while, so I like the Sunday roasts: a leg of lamb on top of potatoes that absorb the juice and fat from the lamb.

What is your favorite kind of restaurant?
I’m not into fancy restaurants.  I like hole-in-the-walls.  I like street carts that you find in New York, or street food like you would find in Peru.

Do you have any cooking advice for home cooks?
I would say to put the recipes aside and start learning techniques—and that’s when you can start being creative.  Take a look at an old cooking manual—basically it teaches you how to roast a chicken and then you can do your own variations by adding rosemary or tarragon—that’s how you learn and how you can start to be creative.

This article appears in the January 2012 issue of Pittsburgh Magazine.
Categories: From the Magazine, Hot Reads, Restaurant Reviews