The duo of Lawrenceville restaurants offer affordable, tasty choices, including the best empanadas in Pittsburgh. 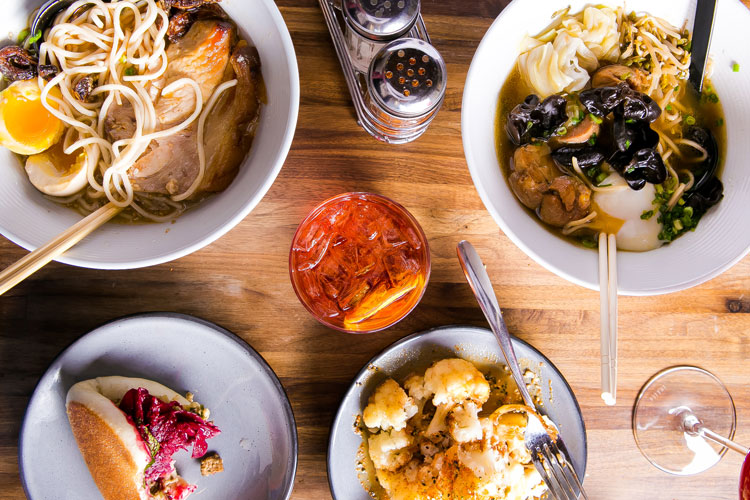 Chefs Domenic Branduzzi, Roger Li and Claudia Moyano know how to please a crowd. When Branduzzi, a third-generation restaurateur, opened Piccolo Forno in 2005, it helped set the framework for Lawrenceville’s rebirth as a culinary destination.

Li, who moved to Pittsburgh to become the opening executive chef of Tamari in 2009, brought with him years of experience working at Philadelphia restaurants, including the famed Morimoto.

Moyano, the first employee at Tamari, became Li’s sous chef, and, later, his wife and business partner. After Tamari closed in 2016, Li and Moyano moved their culinary talents up the block (and across the street from Branduzzi) to open Umami that same year.

Together, they form a culinary trifecta that is peppering Butler Street with hip, affordable restaurants. In 2017, they opened two casual eateries: Ki Ramen and Ki Pollo. 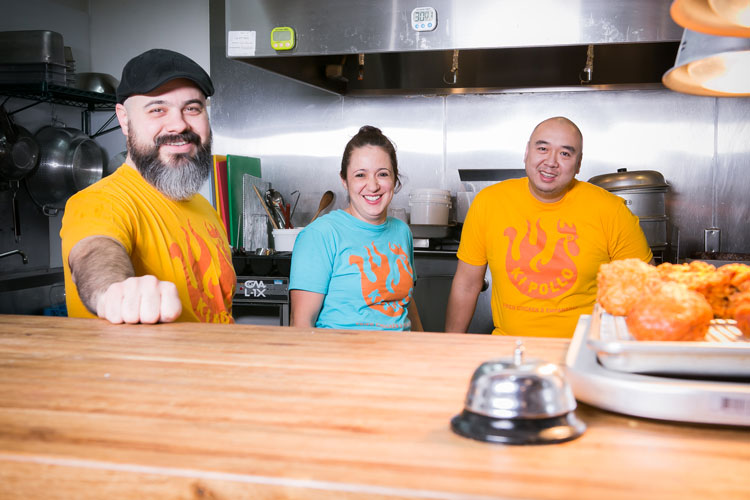 Li and Branduzzi hatched the idea for Ki Ramen because they felt Pittsburgh could use a better bowl of soup. They decided to split the work — Branduzzi, the pasta master, would handle the noodles, and Li would take on the stocks and accoutrements.

They threw a series of wildly popular, lines-around-the-block, fast-to-sell-out pop-ups. However, long lines in Pittsburgh don’t necessarily indicate somewhere you should spend your time — the bowls served at Ki Ramen’s events were, at best, OK. Branduzzi was attempting to make alkaline noodles, denser and chewier than pasta noodles, with his restaurant pasta machine and couldn’t quite get the texture right. Li’s broths lacked depth. Still, the events were popular enough for the two to press on and open a standalone space in Lawrenceville. They also purchased an expensive Yamamoto Manufacturing noodle machine.

My early impressions of Ki Ramen — a smartly designed, three-level establishment divided into a third-floor watch-the-action ramen bar, high-ceiling main dining room and a cool-as-can-be bar space — was that the product, aside from the noodles, hadn’t improved much since the pop-ups. What a shame.

And then things changed. As he did with Umami (which got off to a weak start and has improved exponentially), Li, a culinary and creative force who isn’t afraid to push the more conservative Branduzzi forward, honed in on his dishes. The broths and their components, as well as the restaurant’s limited menu of non-ramen dishes, now feel more thoughtfully composed with a deeper depth of flavor. Chef de cuisine Micah Maughan oversees the day-to-day operation of the kitchen. 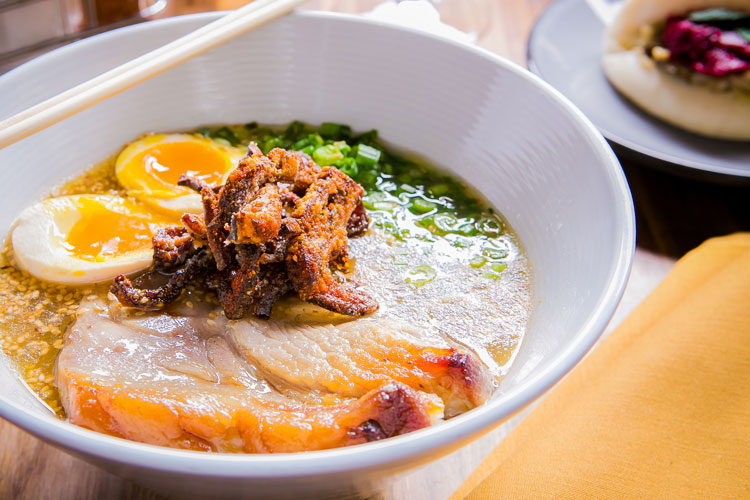 The restaurant’s meat-based ramens begin with a blend of flavorful, collagen-rich chicken and pork broths. Although the menu describes the chicken broth as “patain,” it tilts lighter than a classic Japanese preparation of that style, which is cloudy, creamy and gelatinous. The same goes for the pork broth.

Shoyu — soy-flavored — is my favorite bowl on the menu. Here, the broth is resonant, deep in flavor and with a heady aroma. Tender soy-braised chicken is the primary protein, and smoky, charred bean sprouts amplify the soup’s flavor. Crunchy cabbage adds contrasting texture and a sous vide egg melts into the broth, intensifying the richness of the experience.

Shio — salt-flavored — features thick chunks of chashu pork that are better than many porcine ramen accoutrements I tried on a recent trip to Tokyo. It comes with crispy pig ears, which you should eat first, as they quickly lose crispness. Soggy ears aren’t sweet to eat. Plus, once they sit, they murkily muddle the broth. This was the only bowl at Ki Ramen where I felt like I needed to dip into the optional add-on menu. Because it’s so meat-forward, I suggest adding something such as bean sprouts or kimchi.

Curry ramen was my early-on favorite, but the broth felt thin on my most recent visits. “It’s something you would give to a sick child when they have a slight fever,” a friend said.

Miso Ramen is my least favorite of the six. I figured a soup full of kabocha squash, cabbage, enoki mushrooms and nori would be right up my alley, a rich and satisfying vegetarian dish. But the contents of the bowl were lazy and scattered in presentation, and it tasted more of salt and scallions than fermented miso. The saving grace was the dense and creamy squash, which was a tasty treat. 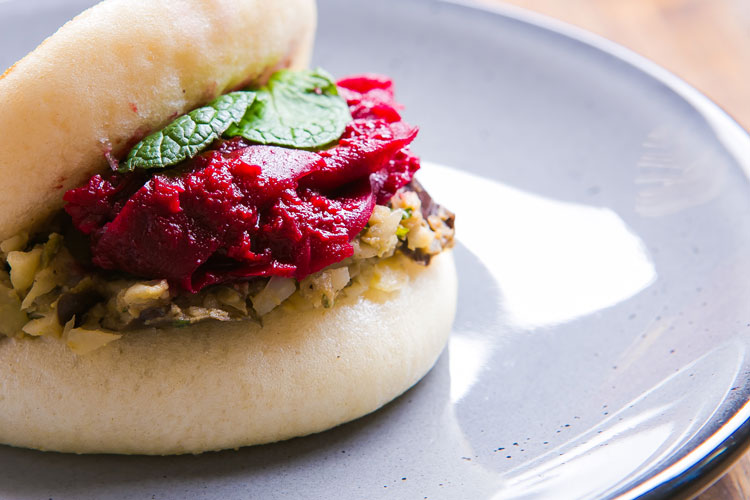 Ki Ramen has a small selection of non-ramen dishes. All of them are enjoyable, and few, especially the bao buns, are noteworthy. The fillings change often, but so far, none have let me down. I especially enjoyed a duck confit permutation filled with luscious meat, lemon peel for beautiful pop and added umami from enoki mushrooms. All of that was stuffed inside a bun crisp on the outside and pillowy inside.

Service at Ki Ramen varies from exceptional to off-putting. On one visit, a server’s rundown of the menu walked a magical line of being hyper-informative, conversational and professional, down to a whimsical and entertaining visual explanation of what’s in the spice rack (props, Ki Ramen, for letting us sprinkle on MSG if we want to — it sure helped in the miso ramen). It was an impressive feat of hospitality and was on-point with Ki Ramen’s vibe. Another server was mellow, informed and warm, but way too casual — even at a chill place like this one, you don’t need to pull up a chair to talk about the menu and take our order. But, I’ll take that over a bartender who made it seem as if he were doing my friend and me a favor by taking our drink and noodle orders — then again, maybe he was, because the restaurant’s bespoke cocktails veer significantly too sweet for my taste. 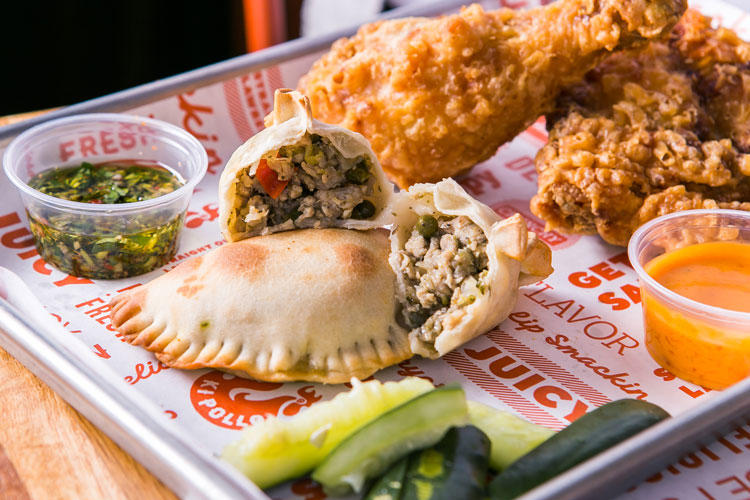 Up the block from Ki Ramen is Ki Pollo. It’s a casual walk-up counter serving quick, inexpensive food. It should be renamed Ki Best Empanadas In Town because Moyano’s stuffed, savory pastries are the reason you want to come here.

Empanadas are ubiquitous in many Central American, Caribbean and South American food cultures, though the specifics of dough, stuffing and cooking method vary by geography. Moyano grew up in Argentina and learned the art of the empanada from her mother.

Moyano serves six permutations of empanada at Ki Pollo. They all have a thin, crispy and flaky crust that gives way to a pleasantly chewy center. She stuffs all of them with mouthwatering fillings.

Moyano prepares her beef empanada with a traditional mix of raisins, egg, onion and manzanilla olives. It’s juicy, lush and has a pleasing pop by way of the onions and olives. Skip a sauce and enjoy it as it is — it’s my favorite of the bunch. Pollo, bright and lively with red pepper, onion and capers, is even tastier when it’s enhanced with housemade chimichurri. Vegetarians should opt for pumpkin, a resonant and earthy mix with cabbage, caramelized onion, kabocha and gouda; brighten it with sambal. 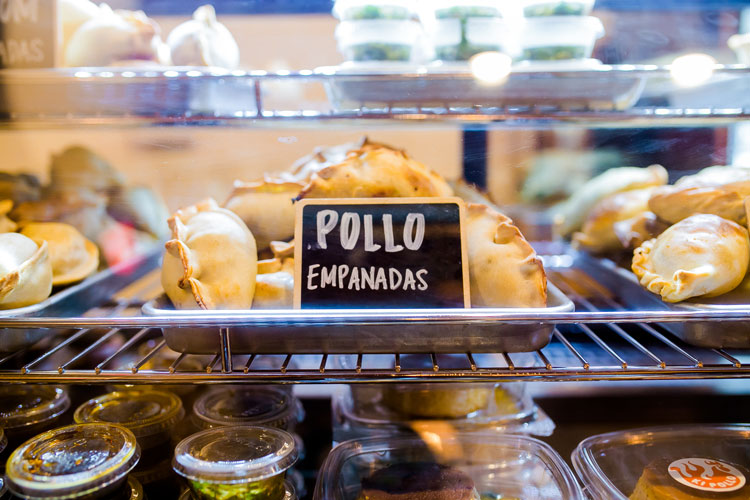 What a shame then, that the restaurant is Ki Pollo. The chicken isn’t yet where it should to be.

None of that is happening here. Well, some of the chicken was impossibly juicy but also indelibly undercooked, so that wasn’t helpful. The edible pieces had too much oily breading, likely because they weren’t fried at the proper temperature, mainly during the second fry, which is designed to get the chicken extra-crispy.

There’s reason for hope. When Li and Moyano opened Umami, dishes with a lot of potential felt frayed at the edges because there wasn’t enough attention to detail. Recently, the izakaya is operating with a more precise vision, and it now is one of my favorite destinations in Pittsburgh for a late night bite. Ki Ramen seems to be following suit, steadily getting better as it grows into itself. I hope the chicken kitchen at Ki Pollo will take a cue from those establishments and start leaning forward with their work, too. If they do, it has the potential to be one of the better budget food options on this side of town.

At the moment, though, Moyano and her empanadas are leading the triumvirate.

This article appears in the March 2018 issue of Pittsburgh Magazine.
Categories: From the Magazine, Hot Reads, Restaurant Reviews