The restaurant at Ace Hotel in East Liberty hits some high notes as it finds itself. 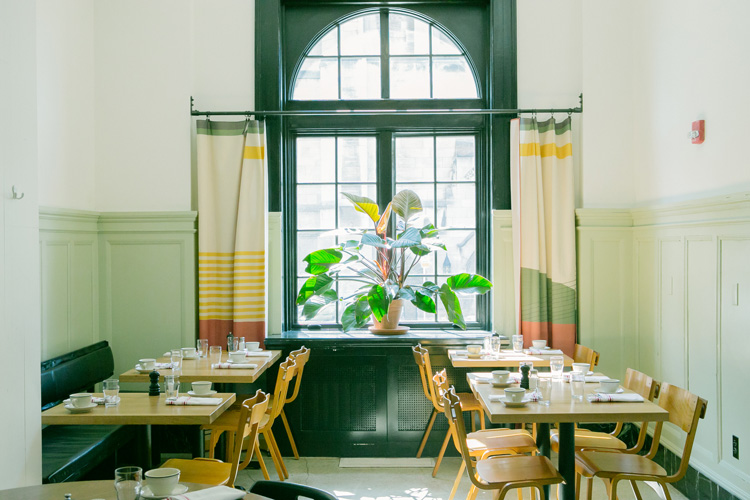 On the surface, Ace Hotel’s Whitfield restaurant is a casual, utilitarian tavern meant to serve guests staying in the 63-room hotel while drawing customers from greater Pittsburgh as well.

The utilitarian side of Whitfield is reflected in its minimalist design, which echoes a proletariat midcentury cafeteria, most notably in the terrazzo flooring and wainscoting retained from the building’s original use as a YMCA. There are attractive, contemporary touches in the brightly colored, breezy window dressings and the sleek curves of the bench seating fabricated by local woodworkers Bones and All. There’s an awful, contemporary touch in the hulking, unadorned wire divider that is meant to separate Whitfield from the rest of the Ace lobby; it looks as though it belongs in a hurried house-flip rather than as a signature eye-grab at a hip hotel.

Brent Young, a Pittsburgh native who runs the much-loved butcher shop The Meat Hook in Brooklyn, is the conceptual head of Whitfield. His official title is Ace Pittsburgh Culinary Partner, and though he’s still based in Brooklyn, he also is a relatively regular presence in Pittsburgh.

Bethany Zozula, the restaurant’s executive chef, arrives at Whitfield by way of Eleven Contemporary Kitchen in the Strip District, where she worked for six years. She’s a rising star in Pittsburgh’s culinary community. 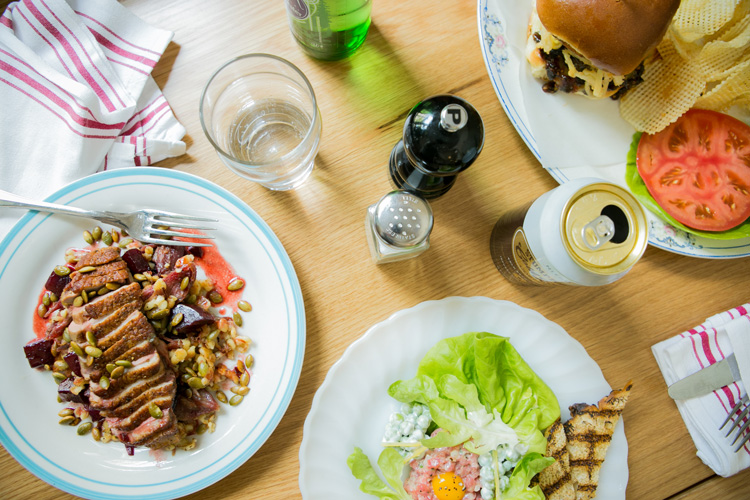 Young’s passion for butchery is evident in the ambitious, whole-animal, high-end steak program at the core of Whitfield’s original intention. Young began working with Jubilee Hilltop Ranch in 2014, nearly two years before he opened Whitfield, to make sure that the restaurant would have a steady supply of properly aged, 100 percent grass-fed beef.

The pedigree of the Jubilee Hilltop beef is laid raw in the tartare appetizer; the minerality of the cow shines in the hand-chopped meat, which is bolstered with a hint of shallot and chive, and a punchy horseradish cream.

The great bites of beef I had in that dish exacerbated my disappointment with the inconsistent treatment of the prestige steaks, which by their provenience should be the best platform to show off the terrific meat. For example, I ordered a porterhouse mid-rare on one visit, but it came out crawling to the border of the Never-Go-Zone of well-done. Shame, because the kitchen’s error robbed us from more of the rich iron and soft grassiness we could taste on the scant bites that were still pink.

The rest of the dinner menu is more consistent, if not always thrilling. I loved the pure comfort of the braised rabbit entree. The meat was soft, tender and sucked up the flavorful sauce. Beans add substance; soft, light gnocchi add airy starch; and bracing olives balance with a bitter contrast. I wish some of the other dishes, such as the poorly constructed and executed ramp risotto, came half as close. 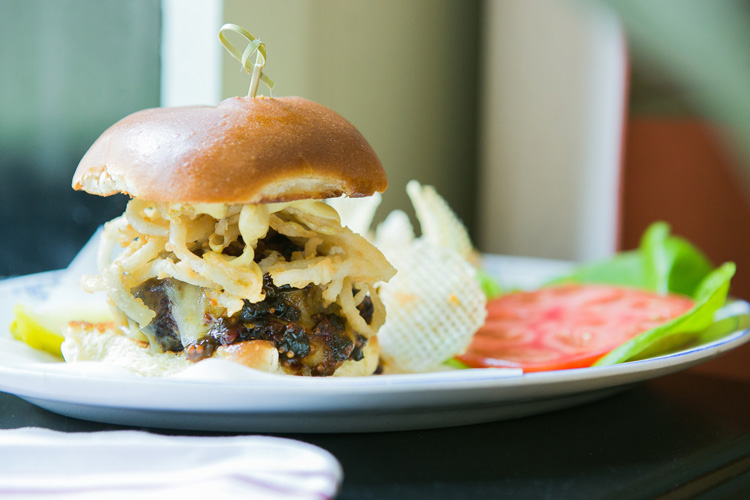 Whitfield serves a hybrid brunch/lunch menu every day of the week, which is a nice bonus for weekday revelers seeking a late breakfast. Toad in a Hole is solid option, accompanying pepper jam that is assertive and hot in a way that ties it together. Skip the three-egg omelet unless you want to experience a dish that feels as if it just came off a room-service heating tray. A good choice for something more lunchy is Whitfield’s rich-and-funky hamburger. A deep caramel char on the burger’s exterior is crisp umami, and fried onion rings bring crunch and punch. It’s served with chips backgrounded with traces of vinegar, and a classic dill pickle.

One area in which Whitfield has found both identity and consistency is with the desserts. Last month, we honored Casey Renee, the restaurant’s pastry chef, as one of Pittsburgh’s five “Outstanding in Their Field” chefs for her extraordinary work.

The coconut sorbet dessert I had on one visit is a beacon to vegans searching for a sweet finish. In addition to the smooth, tart, satisfying (and dairy-free) sorbet, there was a savory-sweet layer of coconut candy lime granita. 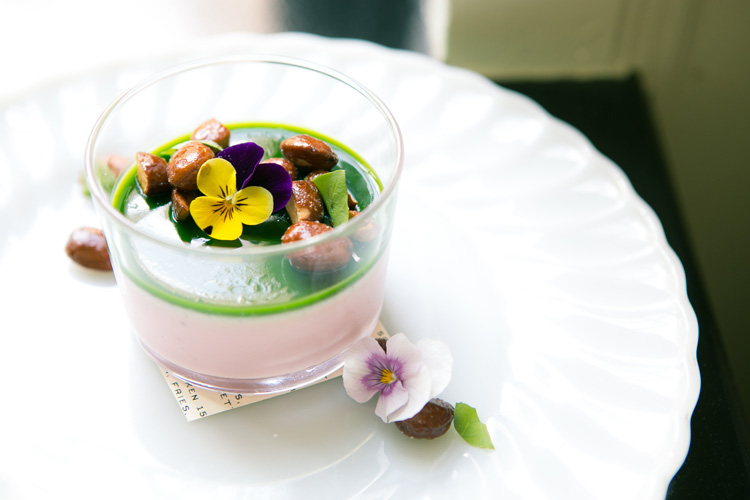 A springtime dessert was nicely composed with a layered structure of green basil gelatin, soft strawberry panna cotta and candied, fried Marcona almonds. It’s a fine-dining throwback for Renee, who left the Michelin-starred world of New York to focus on a more down-home approach at Whitfield. Fruity, sweet, herbaceous, crunchy and salty, it was a perfect end-of-meal bite.

My suspicion is if Whitfield found its identity, it also would find consistency. Nothing about the decor or the service (generally very good, if a little breezy; occasionally indifferent to the point of maddening) makes me think “steakhouse,” yet on all my visits the high-end steak storyline was the one sold to me.

If you want to be a modern steakhouse — and certainly we could use one in Pittsburgh — focused on beautiful, ethically sourced meat, then do it. If you’re not going to do it 100 percent, or at the very least be consistent about it, then scale back and focus on making brunch/lunch and dinner better.

The restaurant doesn’t need to take an all-is-better approach simply because it’s in a hotel, or because perhaps those in charge don’t think Pittsburgh is ready for something more specific. We are. 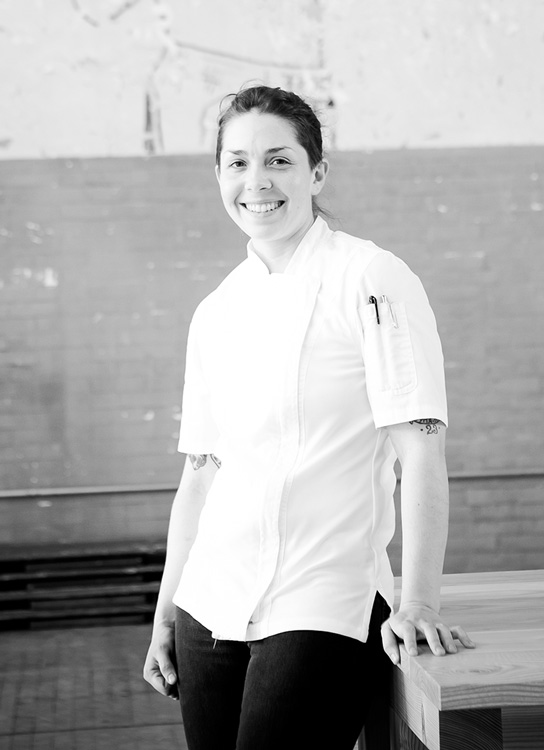 What was it like for you to move from working as executive sous chef at an established restaurant (Eleven) to working as executive chef in a brand-new restaurant?
It wasn’t as hard as I thought it was going to be. When it started happening, there’s something that switched on: It’s a kitchen, and I’ve worked in kitchens for a long time. So I started doing what I knew how to do, which is get the team together, figure out people’s strengths and where to put them. The biggest challenge was having to set up systems from scratch; I hadn’t done something like that before. Working under pressure is good for me, so not having a moment to second-guess myself kept me moving forward. If something doesn’t work, then you figure out a different way to do it and you move on. That’s where we’re at right now.

How much of the menu design is yours?
I went to New York before we opened and worked at The Meat Hook for a few days with Brent (Young, Ace Pittsburgh Culinary Partner). That’s when we first started talking about the menu. Brent and I have a very similar taste and style, so when we worked on the menu there was a ton of collaboration. In the last few months, it’s moved more toward me, and he can focus on all of his other projects, too.

Where did the steakhouse menu come from?
The original menu concept we were given by ownership came from Paul (Sale, Ace Hotel’s corporate chef), and that’s when they brought in Brent. We were building from whole-animal butchery as our main focus. All of that had been talked about way before I came on board.

What are the challenges of running a restaurant that’s a hotel restaurant but also a draw for the wider community?
I worked in a hotel restaurant (Mountain View Inn, near Greensburg) years ago, and we had to do a lot of hotel-related things. But I think because of the style of hotel that we are and the clientele of the people who stay here, people are really receptive to what we’re doing. One thing we had to respond to was the need for more vegetarian food for our clientele, so I added more dishes and trained the staff on how to better explain what we have.

This article appears in the July 2016 issue of Pittsburgh Magazine.
Categories: From the Magazine, Hot Reads, Restaurant Reviews