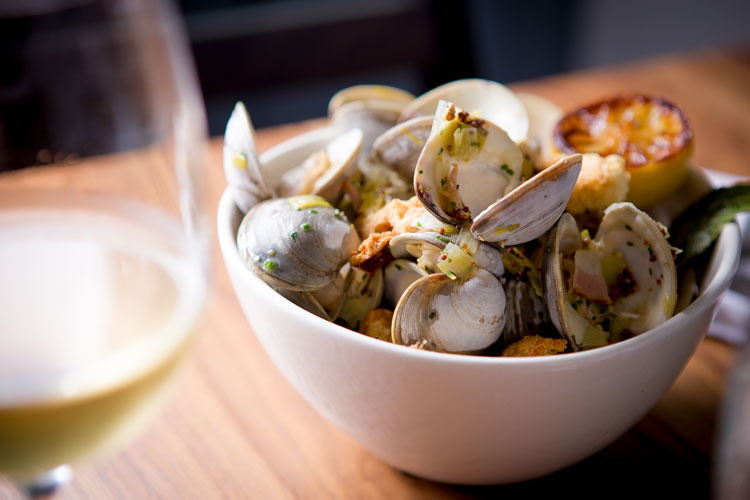 Union Standard’s Downtown debut in February was one of the buzziest openings of the past few years.

Not only did it represent a cornerstone achievement for The Davis Companies, which spent more than $100 million renovating the landmark Flemish-Gothic-style Union Trust Building, but it also is the first solo project from Executive Chef and Majority Owner Derek Stevens, the celebrated chef who ran the show at big Burrito Group’s Eleven Contemporary Kitchen in the Strip District for more than a decade. If there were a pantheon of Pittsburgh chefs, Stevens would be on it.

Stevens’ Union Standard menu echoes many of the themes at Eleven — technique-driven, crowd-pleasing cooking that lands in a comfortable niche between classic and contemporary. He plays it safe enough that conservative diners will find ingredients and preparations with which they are familiar, yet, attention to detail from the kitchen extends to the edges of the plate. Open-minded diners won’t feel as though they’re eating relics of the era of big beef and boiled vegetables. At Union Standard, Stevens roots his in the cuisine of the Mid-Atlantic and northern Appalachia.

I like how Stevens’ approach to regional cooking and seasonality translates to dishes in a no-brag way; there suddenly were grassy asparagus stalks and popping pea-shoots in May and as-good-as-my-garden (and that’s saying something) strawberries in June. Nobody performs a big production number as the menu simply and subtly changes when ingredients come into season. Extra marks to Stevens for sticking to his guns and not rushing elements onto plates before their time; while other Pittsburgh restaurants trucked in peas and strawberries in April because “spring menu,” Stevens waited until they (for real) were seasonally appropriate menu items in our part of the state. 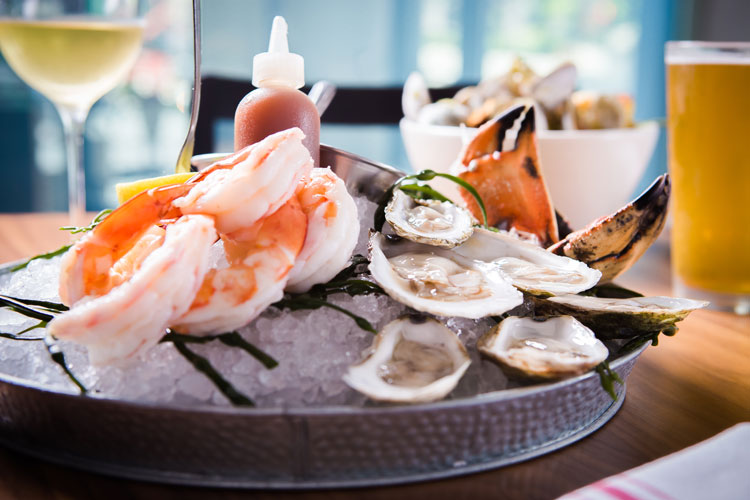 Be sure to get soup. My favorite thus far featured the aforementioned strawberries; puree with a calming, soft-pink hue broken up by streaks of goat-milk yogurt, bright blossoms, shoots and mint, it was savory enough to work as a first course, yet still celebrated the sweet acidity of the spring fruit.

A friend and I told our server that we were splitting everything, and when the soup arrived, it did so in two bowls, both beautifully plated. It was a fine example of how management emphasizes paying attention to little details; the service at Union Standard is warm and hospitable, yet never crosses the line into chummy. We could use more service like this in Pittsburgh.

Seafood dishes are worth ordering, too. Clam-and-oyster soup, for example, had a perfect amount of wine to add a little tang to the broth and a tasty portion of very fresh clams. What the accompanying housemade crackers lacked in cracking they make up for in salinity and savory flavor. The vegetables all were precision-diced, a demonstration of professionalism from Stevens’ kitchen; he has for years established a reputation as a chef who demands attention to detail from his staff. Another clam dish — these were cider-steamed and popped with bright mustard and savory jowl-bacon — is just as good. 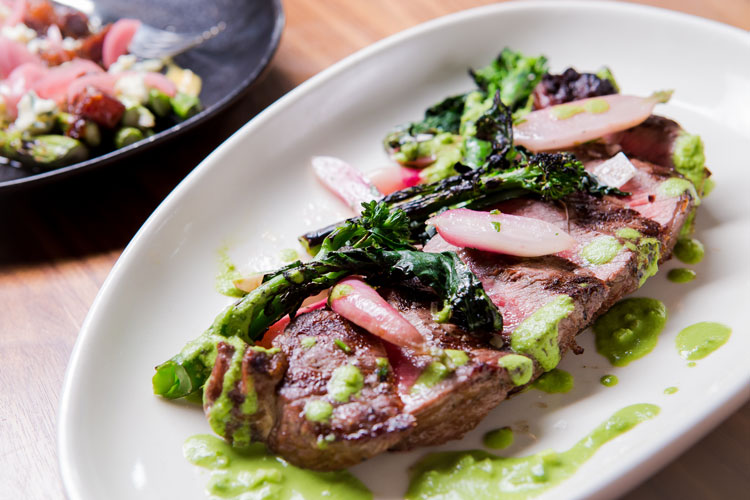 Main courses often don’t fare as well as the starters, primarily because the kitchen doesn’t seem to be taking enough advantage of the J & R Manufacturing grill and rotisserie. While vegetables such as maitake mushrooms taste of wood-smoke and campfire, meats and fish — aside from one visit with a few friends where most of the meat dishes worked — tend to miss out on the flavor. I want the branzino to feel crisped and kissed by fire, instead of just tasting as if I got a very nicely cooked but rather boring piece of fish. And if my Locust Point chicken is listed as wood-roasted, it probably should taste wood-roasted (and not be overcooked).

Union Standard’s design is polarizing. Some friends I dined with love the 1940s-era feel, complete with a Marie-Laure Cruschi mural evocative of the Appalachian woodlands. Others find the whole situation tacky and confused, a mix of modernist and modern that never quite gels. My favorite seat is at a corner of the square bar at sunset, the light breaking into the room. (Bar diners can get an excellent raw bar menu.) 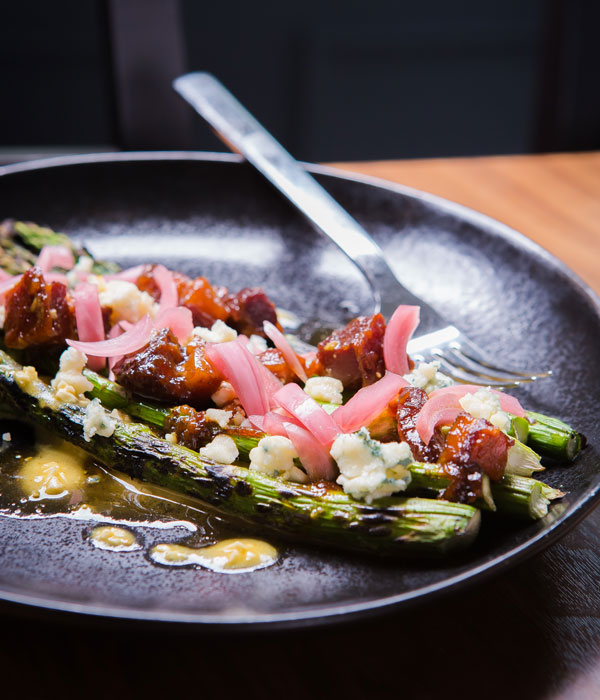 Nearly six months in, Union Standard already is more appealing than just about any Downtown restaurant — but isn’t quite as dynamic as I’d expect with Stevens at the helm. Although his menu has a compelling culinary perspective, it still feels like the restaurant hasn’t yet found its identity.

Is this meant to appeal to diners searching for a classic American restaurant with steaks and shanks, or those who want a modern American restaurant focused on seasonality and freshness? Is it a good thing that Downtown-power dressed in business suits are seated at a table next to diners wearing cargo shorts and T-shirts? Should Stevens and his team try to thread that needle and make everyone happy?

Currently, that is what it feels like they are aiming for, and I’d rather they didn’t.

There’s a conservatism that feels as if it’s holding Union Standard back from being what it needs to be. I’d like to see Stevens trust that diners will follow his lead rather than trying to stick to the middle of the road. And I’d like to taste more woodsmoke. If he does that, Stevens will continue to raise the standard Downtown. 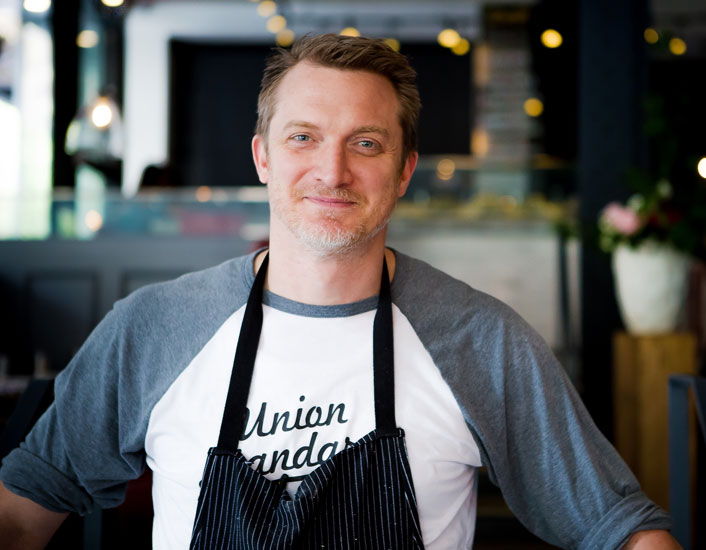 What were the biggest challenges of opening a restaurant?
All of it! How long it takes to get stuff done is a grind. It’s 2.5 years of trying to sort out things like lease negotiations and designing a kitchen. Then suddenly you’re opening in two months and everything is in your face. I thought I had a pretty good idea of how much was involved, but the extent of it, as an owner, was a new thing for me. There was so much involved with banks and lawyers and that sort of thing. I felt like a fish out of water in those scenarios because I spent my whole life in the kitchen. One thing I kept reminding myself was that if I took these engineers or architects and put them in a kitchen of a Saturday night, this is how they would feel.

And post-opening?
There are a whole new set of challenges. It’s a lot of work. But it’s also so exciting. Now that we’re a few months in, we’ve settled into the groove of things. Staffing is the biggest issue, but that’s something anyone in any restaurant in Pittsburgh will tell you right now. For me, I was a little surprised, or naive, about how much would be involved in being both chef and owner. I thought we’d open the doors and I could focus on cooking, but there’s so much else I’m responsible for. It’s a difficult balance between doing the owner stuff but also making sure I’m running the kitchen.

How did you go about creating the menu?
My thought process was to develop a menu that was approachable. More casual and rustic than I’ve done in the past (at Eleven). And I wanted to have items on there that are representative of what I see as parts of American cuisine. We’re still in that opening phase of settling in on menu items. I want things to be super seasonal. I wrote a menu as part of the business plan, but kept changing it as time moved along.

I like how you stick to your guns regarding seasonality. Do you think you’ll be able to stick with that?
It’s challenging. There’s a little flush of some spring stuff and then everyone gets excited, but there’s a lull between that and when summer stuff gets rolling in. Must be nice to have springtime in a place like Guatemala.

What are the next steps in the restaurant’s development?
I’m excited to have a bunch of stuff that’s seasonal and local now; we have more range in the menu. We’re restructuring it a little bit. We’ll make little tweaks in how we present the items. I want to continue to grow the team there and build on what we started.

This article appears in the August 2017 issue of Pittsburgh Magazine.
Categories: From the Magazine, Hot Reads, Restaurant Reviews