Restaurant Review: The Twisted Frenchman is an Ambitious Endeavor

Andrew Garbarino moved his fine-dining restaurant into a multimillion-dollar new home. Does it live up to its new digs? 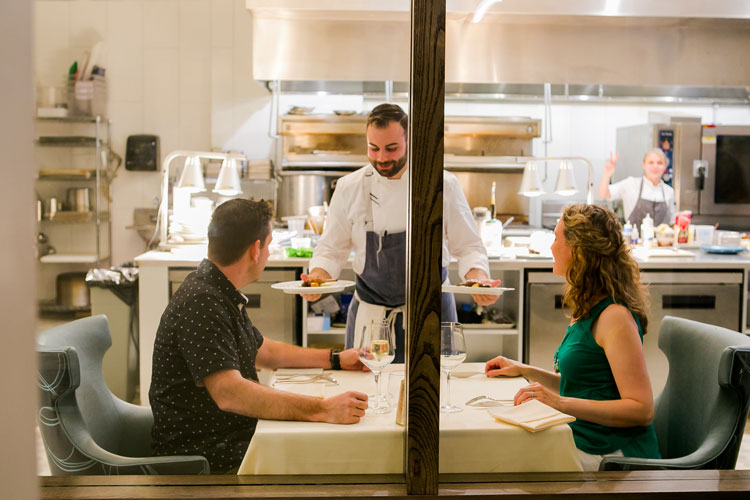 Andrew Garbarino is a talented chef. But is he good enough to fill two restaurants in a hulking old auction house in East Liberty?

Nearly a year ago, Garbarino moved his Twisted Frenchman operation around the corner from its original location, overseeing a multimillion-dollar renovation of a vacant building on Baum Boulevard. There, he operates 42-seat The Twisted Frenchman upstairs and, on the ground level, a more casual brasserie, Bar Frenchman.

Garbarino wants The Twisted Frenchman to win acclaim not merely as Pittsburgh’s most exceptional fine dining restaurant but one worthy of national attention. I’m hopeful but as yet unconvinced about Garbarino’s potential to do that.

Most people visit fine dining restaurants once or twice a year, if that. A meal at a restaurant with pressed linens and servers who bring everything — even a fork — on a silver platter is a luxurious indulgence, possibly even a new experience. So the expectations are high — at a casual restaurant a thing or two can slide, but in fine dining, everything needs to fit the bill. 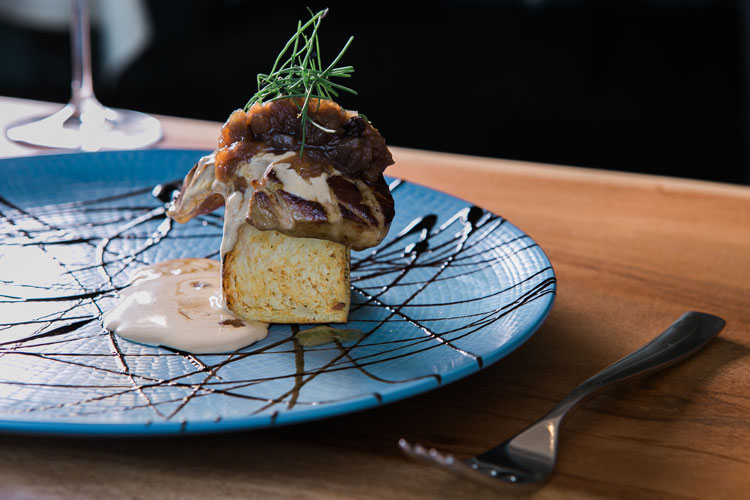 Garbarino offers 3-, 8- 14- and 21-course tasting menus; diners should call ahead for the 21-course chef’s table option. When Garbarino is on his game, he cooks some of the most alluring dishes in Pittsburgh.

A limited February menu began with pheasant consomme, a light, yet remarkably complex broth with small bites of thigh meat, carrot, celery, mushroom and truffle, capped with flaky, buttery dough. It was presented on a pile of smoldering hay, a delightful touch of theater that also aromatized the soup. On his spring menu, Garbarino’s elegant fillet of Scottish salmon served with braised Belgian endive, fumet egg custard and preserved lemon powder evoked sea butter. A handful of other dishes, such as a mini rack of lamb with pistachio crumble, spring peas and Parisian gnocchi and spring-pea risotto with onion, garlic and mushroom papers still ring pleasant in my memory, too. 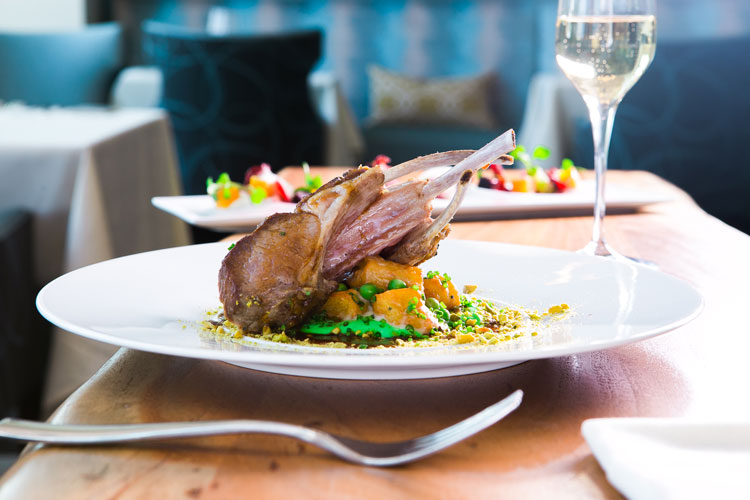 At other times, however, Garbarino demonstrates that he is a chef in need of elite-level mentorship — the Culinary Institute of America graduate previously was a line cook at Spoon and Il Pizzaiolo, both worthwhile establishments, but not in the league that he aspires to —  with dishes that fall just short of topflight. When I first reviewed The Twisted Frenchman in November 2015, I said Garbarino reminded me of a blue-chip prospect hustled up from the minors a couple of seasons earlier than he should have been. Since then, Garbarino has made big leaps because of his innate talent, but at times, his aspiration gets ahead of his execution.

Braised octopus, a vivid assemblage of tiny fuschia octopus, orange and carrot puree, a slaw of apple and fennel, celery leaf and other herbs is served alongside a hunk of white-hot binchotan sitting atop fragrant rosemary and thyme. It would be a stunning presentation if it weren’t served on what looks to be a large bathroom tile. Diners are instructed to heat the mollusk on the coal — fun — but for all the sparks, it was under-seasoned and a bit dull to eat. On a second visit, the binchotan didn’t keep its fire, the aroma quickly was lost and the octopus remained cold. While it’s a vast improvement from his smoke-show “bagels and lox” at the old Frenchman, which was all show and no go, this and other dishes make me wish Garbarino had taken some time to stage at restaurants with the prestige he aspires to, such as Alinea in Chicago or Atelier Crenn in San Francisco, to dial in the details of how to marry modernist cuisine, classical touches and a sense of showmanship.

Garbarino can start in Pittsburgh by making it less awkward to get to a table. The official entrance to The Twisted Frenchman is in the alley behind the restaurant, but most everyone walks up the stairs by the front door and lands in a hallway between the dining room and the open kitchen. There, a server will ask you to stand awkwardly against the wall while he checks on your table and then another server will demand you march to the “front” to see the host. At least that’s what happened to me on three visits. That third visit was a day later than planned because Garbarino had, without notice, closed the restaurant for carpet cleaning — but didn’t bother to post anything on social media. Nobody answered the phone, either, which is a recurring theme. I’m all for online reservations, but if you’re shooting for the stars, you probably should have someone answering the phone. 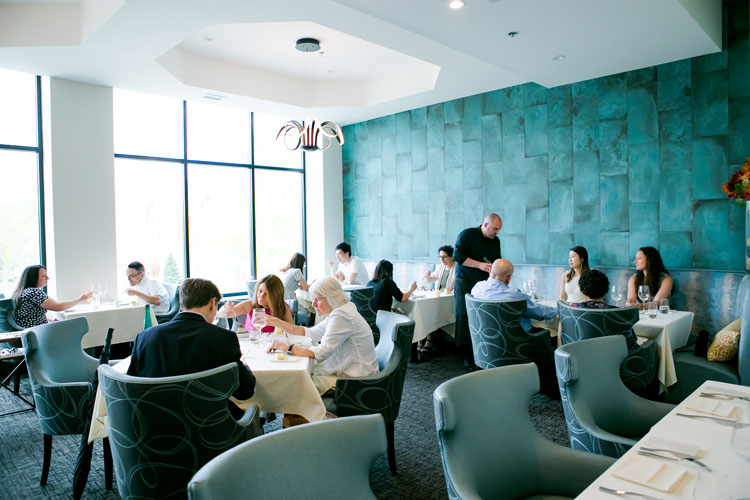 I’m not in love with Garbarino’s dining room design, a blue on blue on blue on seafoam on another shade of blue color scheme that is not cohesive, resembling what happens when a mid-budget business hotel (a la Hyatt House) upgrades its lobby bar but wants to throw in a touch of late-’90s nostalgia. The chandeliers say high-end stoner basement more than they shout world-class restaurant, and the art on the walls tends to fade into the background. The one saving grace is the chairs; Garbarino fell in love with them while dining at Alinea — where he found much of his design inspiration —  and decided he wanted the $927 seating for his restaurant, too. They are built for a long, leisurely meal.

Garbarino recently brought in some help with an impressive new general manager, Yannick Thomas. Thomas’ professional career was forged in the south of France, where for nearly two decades he worked in Michelin star restaurants, most recently as general manager of the two-star Restaurant Paloma. 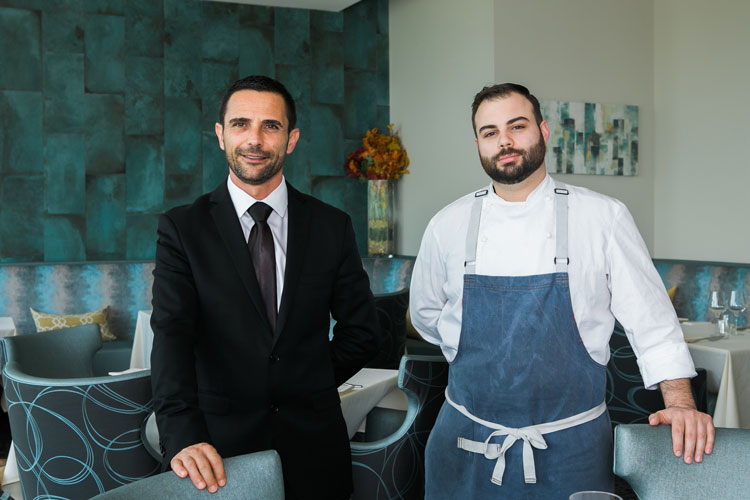 Service — thoughtful, crisp and warm without ever veering too chummy or intrusive — has long been a draw, and, with the addition of Thomas in May, it now is verging on something special. He was just two weeks into his tenure on my last visit but had already implemented noticeable upgrades such as an uptick in the crispness of service, particularly in the pacing and presentation of courses, as well as overseeing ridiculously tasty wine pairings (at $30 for the 3-course menu, it’s a must-get). There were still some small details that need to be examined — a server incorrectly told us that a sunchoke is the root of sunflowers, for instance — but, all in all, I’m enthusiastic about the direction Thomas is taking the restaurant.

The best players are the ones whose confidence leads them to believe they are worthy of the accolades yet know when to step back and find mentorship from an outstanding coach. It appears as if Thomas is ready to step into that role, serving as an inside-outside voice who will shoulder-whisper and perhaps show Garbarino a thing or two.

Bar Frenchman, especially when the windows are open, is a charming destination for a drink and a snack, such as raclette. Bar manager Greta Harmon orchestrates one Pittsburgh’s most whimsical cocktail menus, combining a reverence for craft and a sense of playfulness that doesn’t compromise the elegance of her drinks.

Harmon's springtime “Taste The Rainbow” series is displayed on a layered graphic full of drawings and charts directing drinkers to a selection of brightly hued cocktails with flavors that often belie their appearance. “Blue,” electric in presentation, tart and peppery in flavor, is a serious cocktail disguised as a disco drink. “Green,” shimmers glitter, a silky, substantial party drink for adults with champagne, vodka, fennel liquor and kiwi purée, perfumed with a twig of absinthe-soaked rosemary. 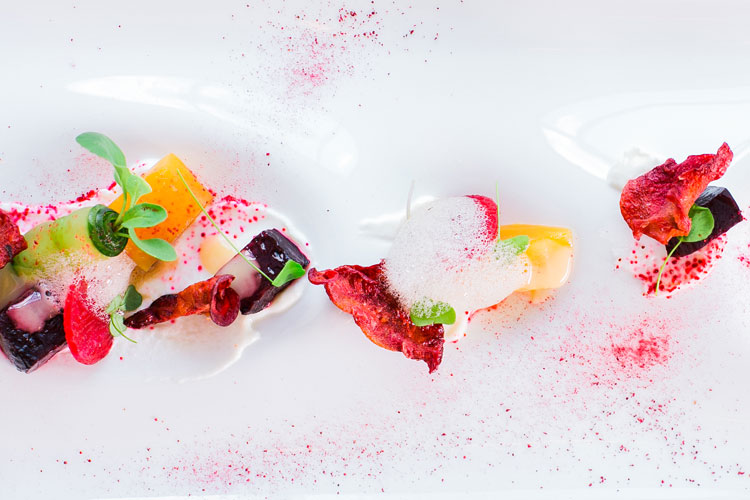 Garbarino’s ambition to elevate dining in Pittsburgh is laudable, as is his commitment to sourcing the finest ingredients from The Chef’s Garden in Ohio, Chatham University’s Eden Hall and a parade of specialty food producers around the world. Most of the time, he does those justice, but sometimes, as in the case of poulet rouge, a pricey heritage bird Garbarino has shipped in from North Carolina for the menu at Bar Frenchman, he falls short, relying on culinary crutches such as cooking sous vide when instead he should focus on technique — perfectly roasting a bird is an excellent place to start, especially if you’re working with top-of-the-line Hestan ranges, and is better than serving a beautiful chicken rendered stringy and somewhat spongy.

None of this is to say that there aren’t a lot of good things happening already. Even as it is now, I’d recommend The Twisted Frenchman as a special-occasion destination. At $55, the 3-course menu is an outstanding value in a city that now is knee deep in price-creep. You’re in for formality of service that is uncommon in Pittsburgh, and, aside from an outlying clunker and an occasional stunner, a skillfully prepared meal that absolutely is worth of your time and money.

Editor's note: We incorrectly identified bar manager Greta Harmon as Greta Harper. We regret and apologize for this error.

This article appears in the July 2018 issue of Pittsburgh Magazine.
Categories: From the Magazine, Hot Reads, Restaurant Reviews