The Squirrel Hill restaurant brings it with tasty cuisine and engaging service. 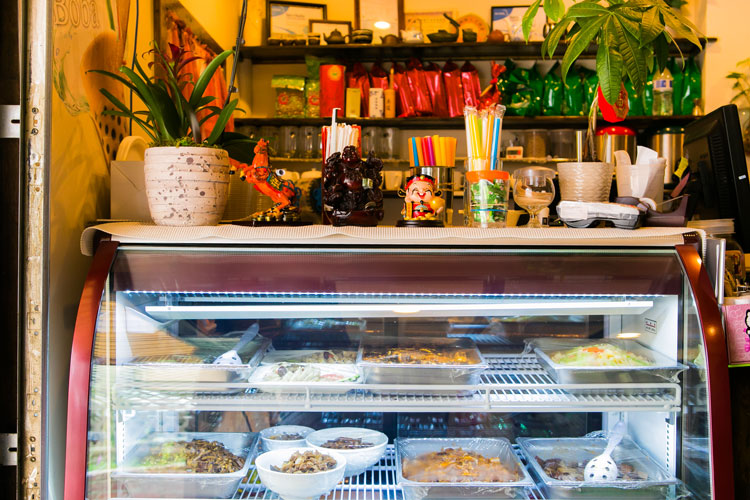 If you really want to know what makes Taiwanese Bistro Cafe 33 such a draw, watch Jenny Tao as she prepares bubble-tea.

The Squirrel Hill restaurant’s effusive owner and front-of-house manager subtly performs a quality-control test of every batch she prepares, sipping from a tiny cup before pouring the rest of the strong tea with a hint of cream, spice and sweetness into a larger serving vessel filled with tapioca pearls.

It’s an example of the attention to detail that Mrs. Tao and her husband Asan, Cafe 33’s head chef, bring to just about everything they do in their Taiwanese restaurant. Both have decades of experience working in the foodservice industry, Asan most recently at nearby Rose Tea Cafe, where he was head chef. In 2016, they decided to take the plunge and open their own space in a former laundromat. 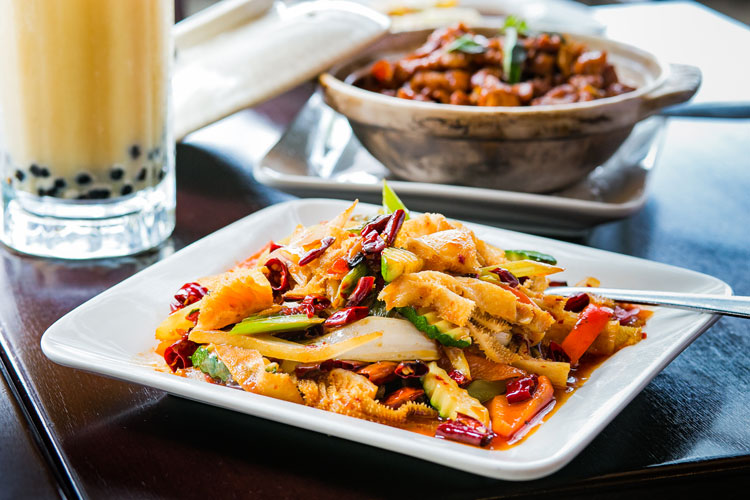 Mrs. Tao oversees an engaging staff eager to help customers navigate a lengthy and sometimes overwhelming menu. Nearly all servers can read tables, take cues as to the comfort level and gently coax willing diners into exploring rewarding preparations they might otherwise be hesitant to order. For example, Tao suggested I try an entrée called tripe with spicy sauce. Thin, soft and chewy book-tripe (a cow’s third stomach) is cut in swirled stripes that resemble calamari. It’s stir-fried with precision-diced vegetables including celery, asparagus, onion, lotus root and peppers. The beautiful interplay of textures and flavors made for one of the best tripe experiences I’ve ever had.

Taiwanese cuisine is strongly influenced by the flavors of Fujian province in mainland China and also draws from other Chinese provinces as well as from Japanese cuisine. An interplay of textures — some, such as the not-quite-chewy but not-exactly-crunchy mouthfeel of cold jellyfish might take a little getting used to — is important. Mr. Tao’s kitchen features a menu that is part homestyle cuisine and part street food, with a little dim sum thrown in for good measure. 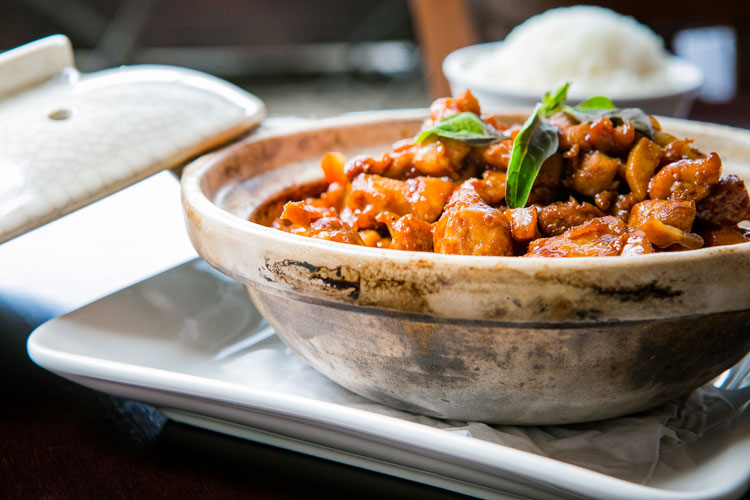 Chicken with garlic and basil (also known as three-cup chicken) is a mainstream Taiwanese dish, and it’s prepared quite nicely at Cafe 33. It’s served steaming-hot in a stone pot, a mix of sweet, savory, garlic, herbal and hot; the charred bits around the edges add a nice layer of umami. Eggplant with garlic sauce is vivid with ropes of vibrant, purple eggplant; it is as tasty as it is striking. Boiled before it’s wok-fried, it has a lovely, luscious texture that’s enhanced with a sauce that’s a little tangy and has a nice spicy kick as it finishes.

Taiwanese comfort food such as warming pork with fresh mustard-green soup, fried rice — here made with short-grain sushi rice — and beef-stew noodle soup, a big bowl of chunky beef and chewy noodles with a broth flavored by five-spice, are worth ordering as part of a balanced meal. And be sure to get Taiwanese sausage. Slices of cured meat are served with a garnish of raw garlic slivers. Garnishes always double as condiments at Cafe 33, and although one might worry about the halitotic consequences resulting from eating slivers of fresh garlic, it’s worth living a little at the expense of others; the garlic transforms the sweet back-notes of the sausage from a solid (if mundane) snack to something so tasty you won’t notice you finished the plate until you did. 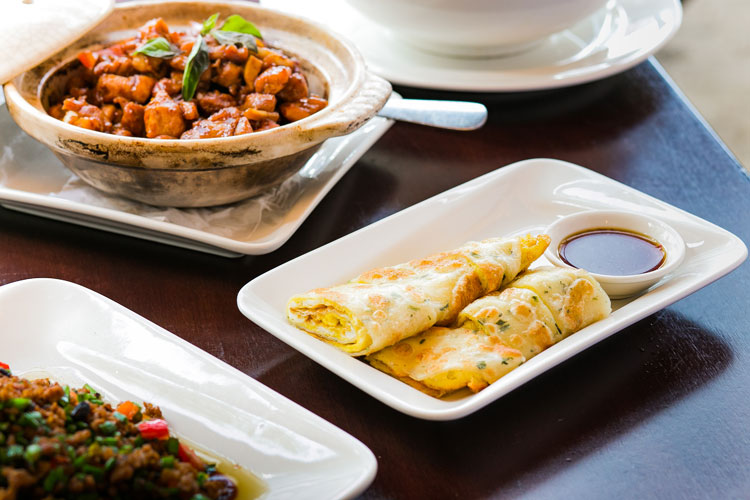 Use those dishes to balance a meal with items that seem, depending on your perspective, to be geared either toward adventurous eaters or, say, most of the world’s population. By and large, even if they’re made with ingredients that are less common on many contemporary American plates than they are on Taiwanese plates, they’re quite tasty.

Pork intestines with Chinese hot peppers is a good place to start if you’re squeamish about eating innards. There’s a little bit of back-funk to the slightly chewy, thin-cut intestines, but it’s not overwhelming. In fact, it adds to the depth of the dish and marries particularly well with a lashing of soothing, nutty sesame oil. 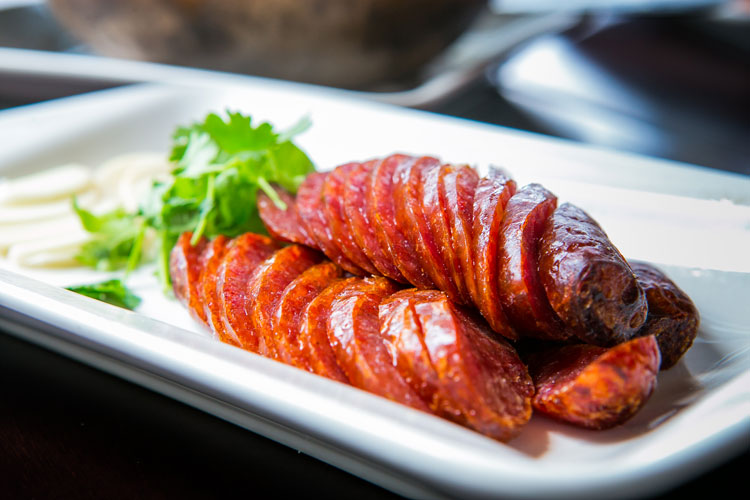 Most of the other items follow along those lines, but one in particular is more challenging for the uninitiated. One evening, a server steered us to stinky tofu — brined, bacterially fermented bean curd — after we ordered pork-blood tofu with garlic-chive soup. While the soup was pure comfort, the tofu, with an aroma that straddles funky rubbish and unwashed armpit and a flavor more pungent than all but the strongest cheeses, is an acquired taste. Several of my friends are stoked that they can make Cafe 33 their go-to spot for this popular street food; I’m hoping that since they do a knock-up job of preparing it here, I eventually will feel the same way I feel about the rest of my experiences at Cafe 33 — joy.

Thank goodness smart diners now want chefs at Chinese restaurants who prepare Sichuan, Yunnan, Cantonese and other regionally specific cuisines that reflect the geographic focus of their establishments rather than catch-all “Chinese food.” In Pittsburgh, Sichuan cuisine still sits at the top of the heap, but with its tasty menu and smart service, Taiwanese Bistro Cafe 33 now is bringing another region to the forefront. 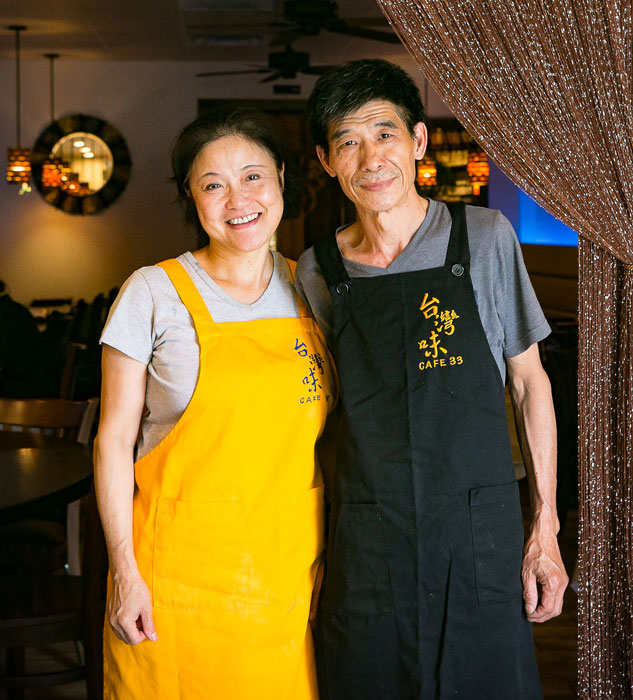 Why did you decide to open a restaurant?
Jenny Tao: We wanted our own place. We wanted to make a place that was like home. There are a lot of things on the menu that reflect my childhood memories. We moved to Pittsburgh in 1995 from Vermont, and we were in New York before that. In Vermont, we had a restaurant near the Killington ski resort and moved to Pittsburgh after a friend invited us to open a restaurant here. This is a small space, so it’s easy to control what we’re doing here. In a big space, it would be harder to make sure the quality is what we’d want it to be.

There are a lot of dishes on the menu that many diners might not be familiar with. I’m glad you decided to go for it, because most restaurants will shy away from them.
I don’t. I want people to try it here. You come here because you want to try something different. No more General Tso’s chicken here, no orange chicken or beef with broccoli. I don’t have duck sauce here. Try our sauces and try our dishes. You’ll love them.

How did you work with the staff to get them to explain everything?
We make sure they have a lot of training. They need to know about the menu items and how to explain what’s on there and answer questions.

What makes Taiwanese cuisine special?
A lot of people don’t know that much about Taiwanese food. We want people to know about our food, community and culture. Hopefully people will learn a little bit about the culture of Taiwan just by eating here. For example, we make sticky rice to celebrate the birth of a child.

I noticed there are a lot of different textures in every dish.
When you go to most Chinese restaurants you feel like every dish is the same — brown sauce and white sauce and that’s it. Here it’s all sorts of flavors, textures and sauces. It’s different. Most people in this area are open to trying dishes that they haven’t tried before. That’s good. And we have people from all different cultures that like to come in here and eat. People should order dishes and share them instead of each people ordering their own dish. This way you get to experience many different tastes.

This article appears in the September 2017 issue of Pittsburgh Magazine.
Categories: From the Magazine, Hot Reads, Restaurant Reviews