The modernist gastropub in Bloomfield still needs some edits, but already feels like a neighborhood fixture. 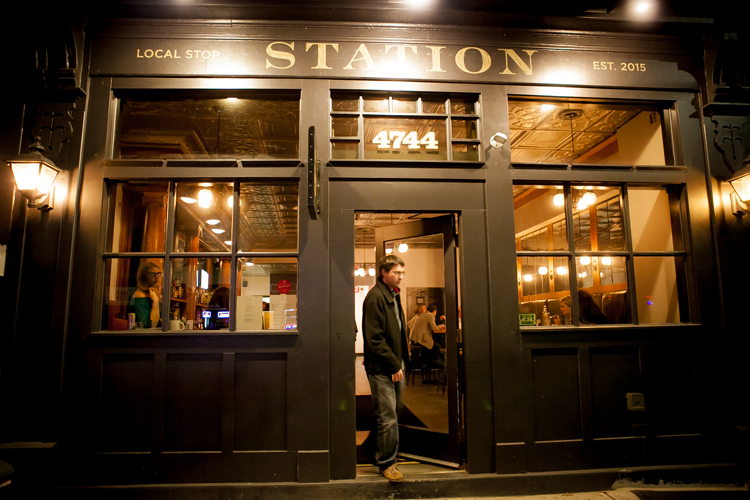 There’s a lot to like about Station in Bloomfield. The modernist gastropub already feels as if it’s a longstanding neighborhood fixture, even though it’s just a few months old. With jet-black walls warmed by overhead twinkle lights, the restaurant is meant to be evocative of a turn-of-the-century train station. It’s a bright light in the darkness of the mostly mediocre legacy establishments that line Liberty Avenue.

Co-owners Justin Janosko and John Pieranunzi run the front-of-house with a crowd-pleasing flair. Servers are well trained, knowledgeable about the menu and possess the all-too-rare ability to be present without being cloying. There’s a reasonably priced and smartly curated beer list and a selection of cocktails that spin from the traditional yet manage — with the exception of a few that veer too sweet — to please both purists and adventurous drinkers. I especially dig the Ruby Queen, a mix of tarragon-infused vodka, beet shrub and honey. 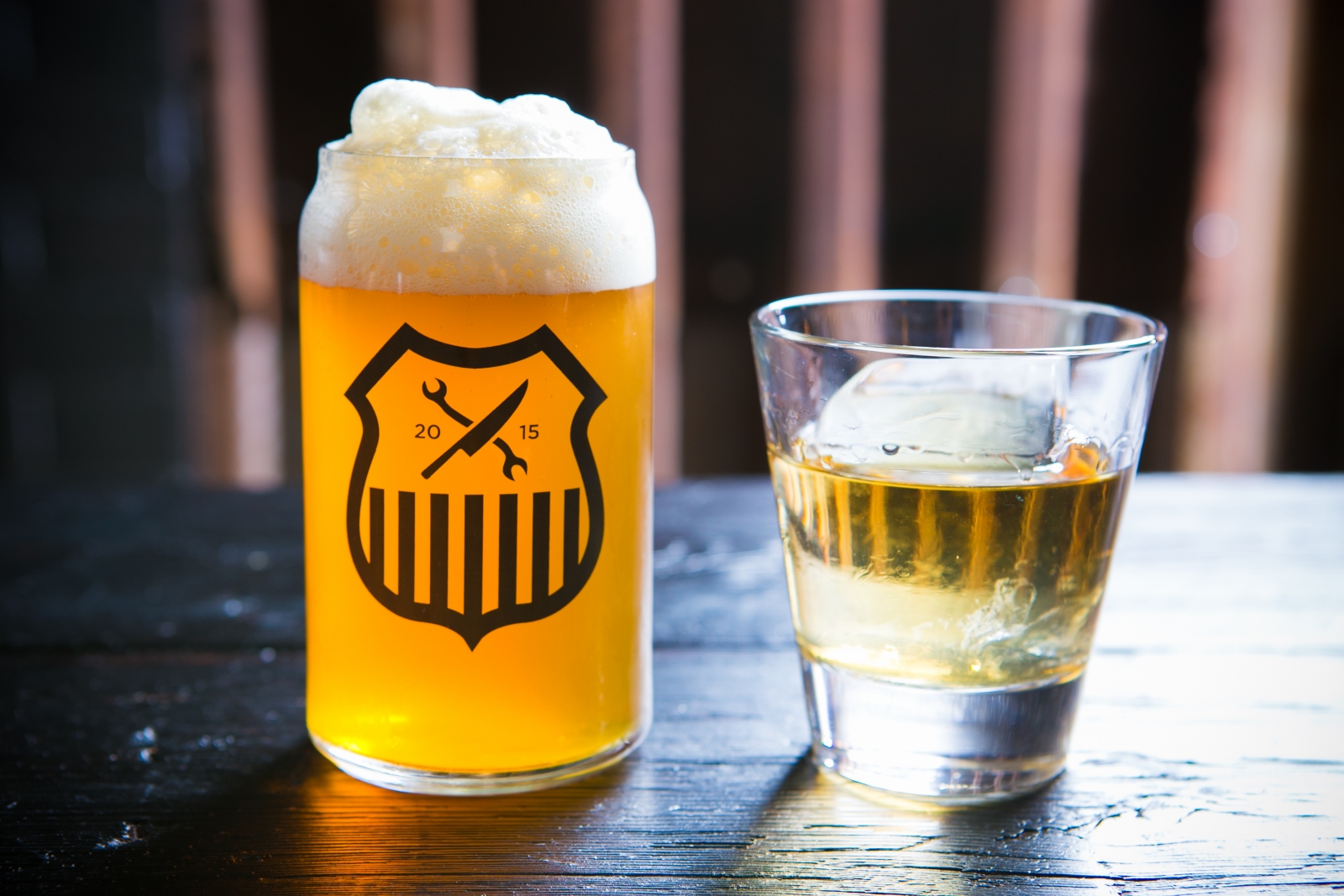 I like where Station is going. Still, I wish Executive Chef/Partner Curtis Gamble used his inner editor to strip down some of the dishes. He gets what’s happening in food today. He’s sourcing well. He has a ton of heart. He’s creative. But although Gamble is one of the more accomplished chefs in Pittsburgh, I feel as if he’s constantly trying to prove himself instead of cooking with confidence.

An Ohio native, Gamble, 33, worked at Six Penn Kitchen and Café at the Frick in the early ’00s before moving to Ohio and later to Chicago, where he was the executive chef at Bread & Wine. He returned to Pittsburgh in April 2012, and he worked as the opening chef de cuisine at Grit & Grace, downtown, until opening Station. 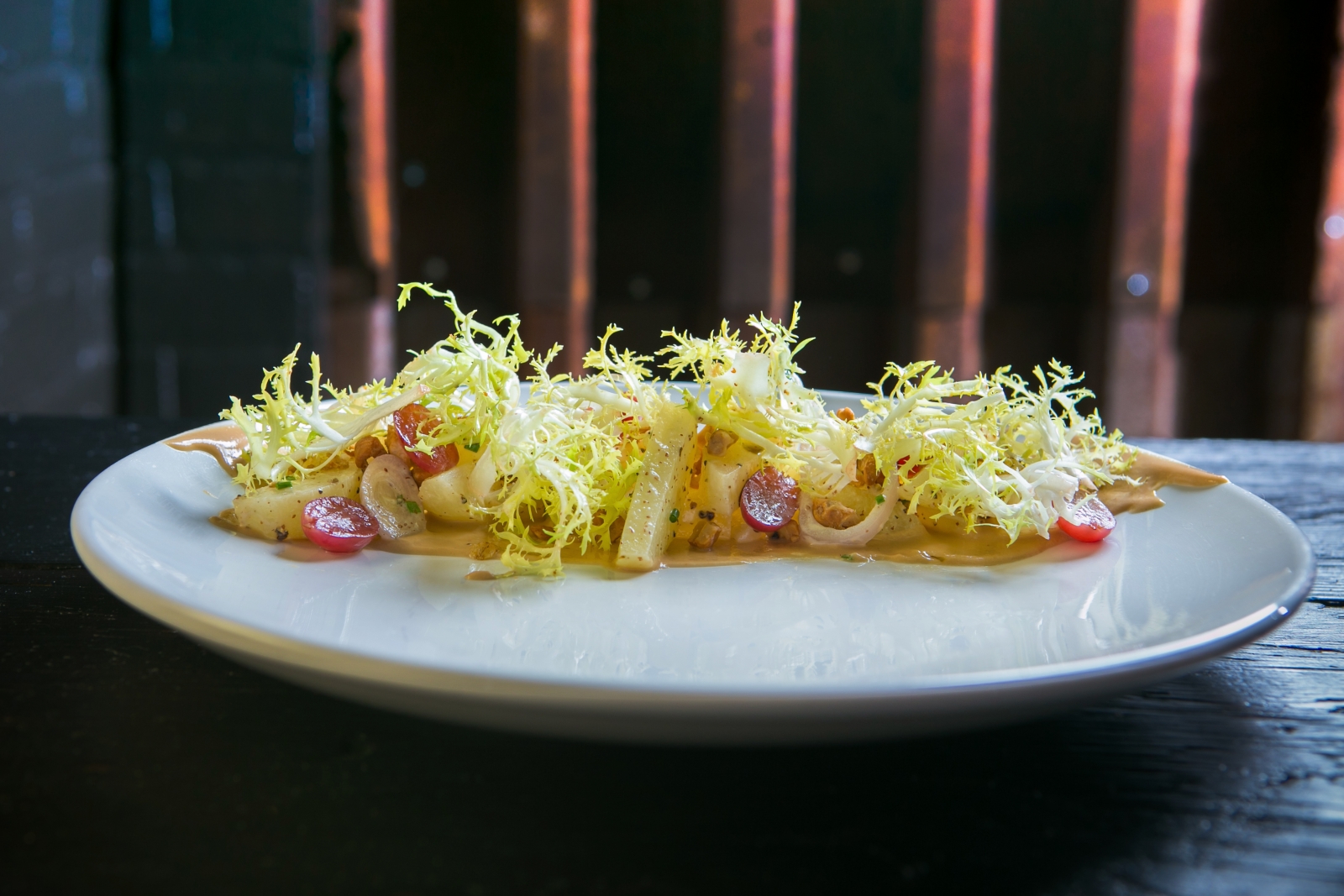 The miso-poached apple salad is a beautifully composed little plate: sweet, funky poached apples are paired with frisée dressed in sharp-sweet cranberry vinaigrette. Toasted oats and cashews add a nutty crunch that balances the soft apples and greens. Everyone at my table wanted to run their fingers over the plate and catch the last licks of dressing as our server took the plate away.

When I returned a few days later, Gamble already had changed the dish — a new addition on my first visit — by pulling back on the toasted oats and adding shallots. The shallots added a nice depth of flavor, but the tinker wasn’t necessary. 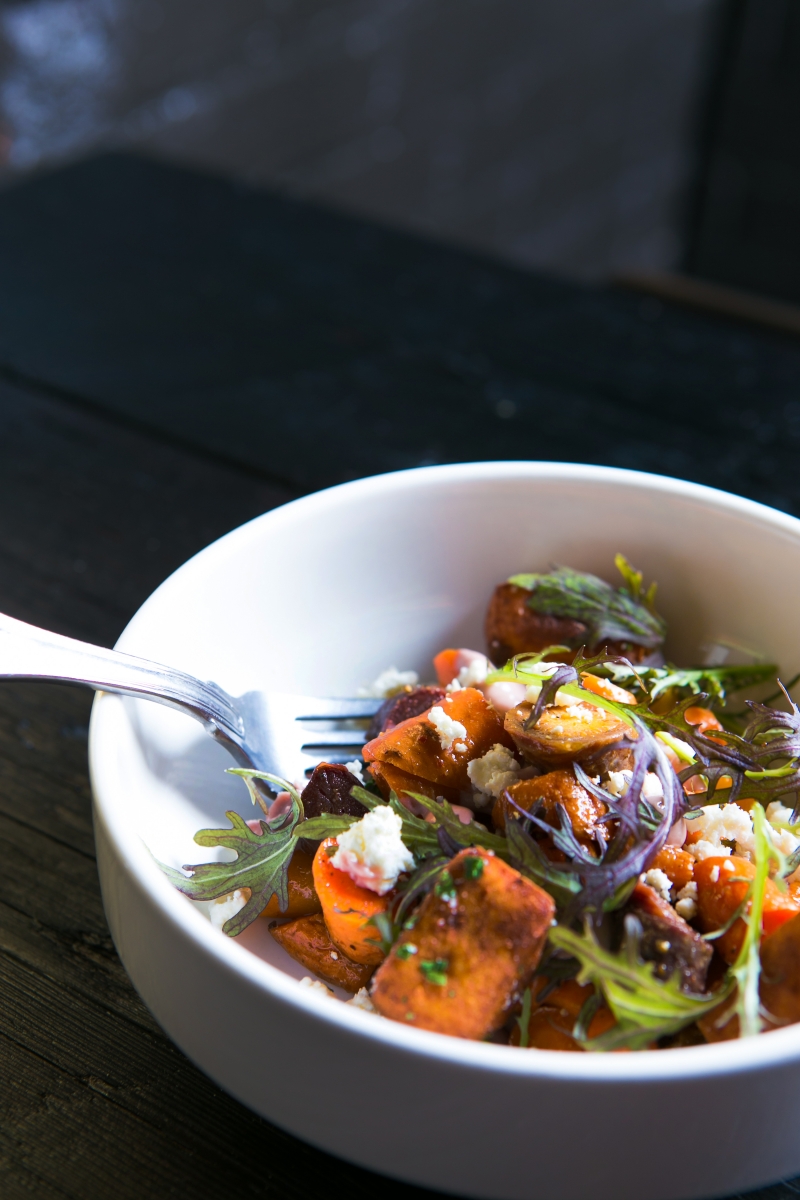 The roasted carrots tossed with fresh cheese, harissa and pomegranate curd also is a winner, though three of us did have to fight over the five little chickpea fritters mixed into the dish (they were worth the fight). “I feel like if I served this to my students they would eat carrots every day,” said a teacher friend.

Wings start off crispy and flavorful but soon spiral into hard-to-finish. The saltiness becomes overpowering — this is a problem with many of the dishes at Station — and the lingering pool of oil made for very soggy final wings. This drop-off is a repeated theme: The first bites of a dish are far more delightful than the final ones. 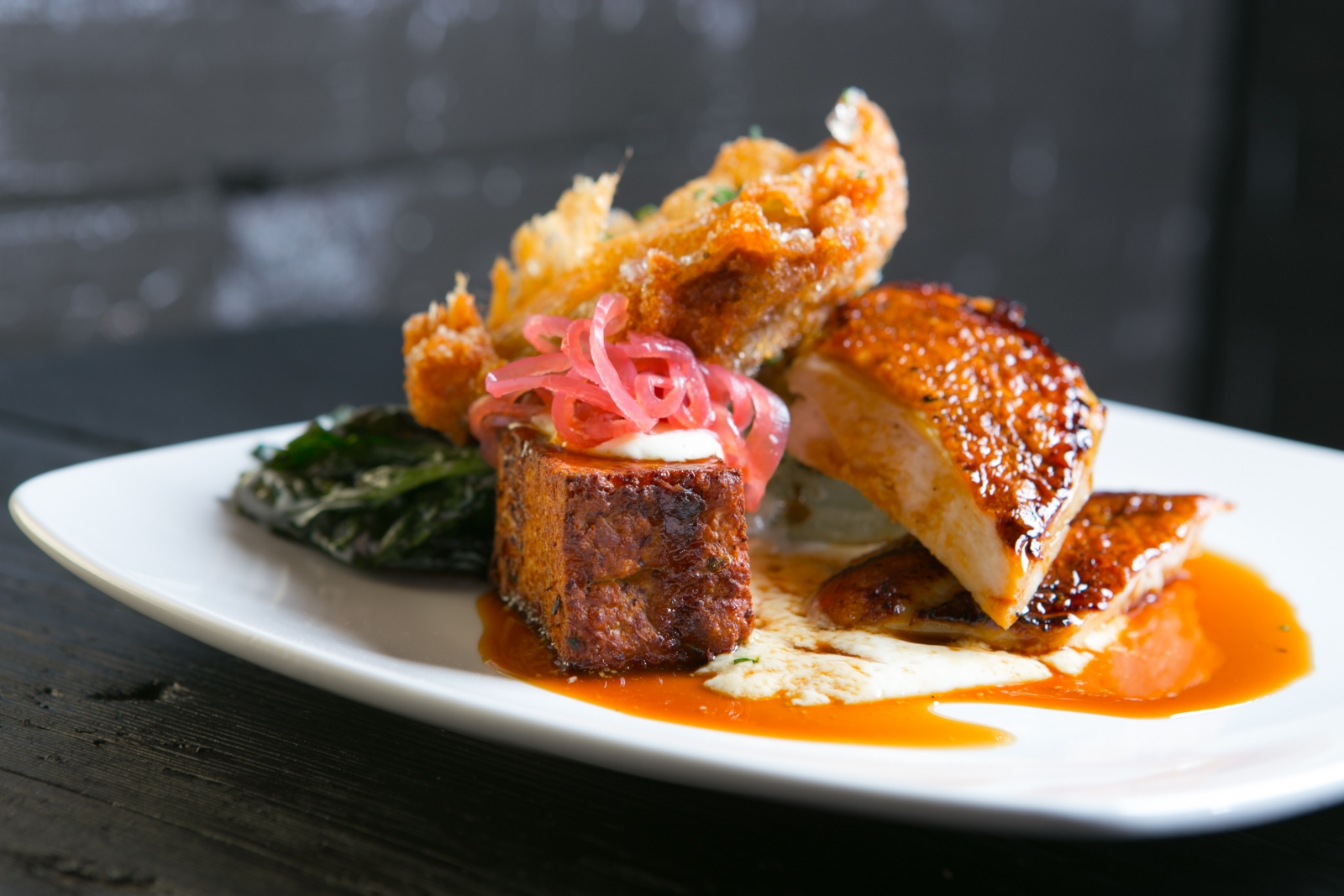 This is even more evident in the main courses than in the small plates. The best of the large plates is the crispy-skin chicken breast and leg. A friend ordered the dish and, although she’d been out on review dinners before and knows the drill, she side-eyed me when I went to take some from her plate. I understood the gesture after digging into the perfectly cooked, crispy-skinned breast; the fried chicken leg is even better. The grilled romaine and corn purée also were nice components in this dish, but the accompanying dirty bread pudding made with hearts and gizzards was too salty.

The walleye is a dish in need of editing. The fish itself is perfectly poached, tender and delicately buttery, but it’s blown away by a salty broth and gritty, muddy clams. I wish the outstanding dragon-tongue beans, quick-pickled in strong anchovy vinaigrette early in the morning, felt like more than an afterthought. They’re crunchy and sharp, and they provide a better foil to the delicate fish than the potato chips and saffron gnocchi also on the plate. 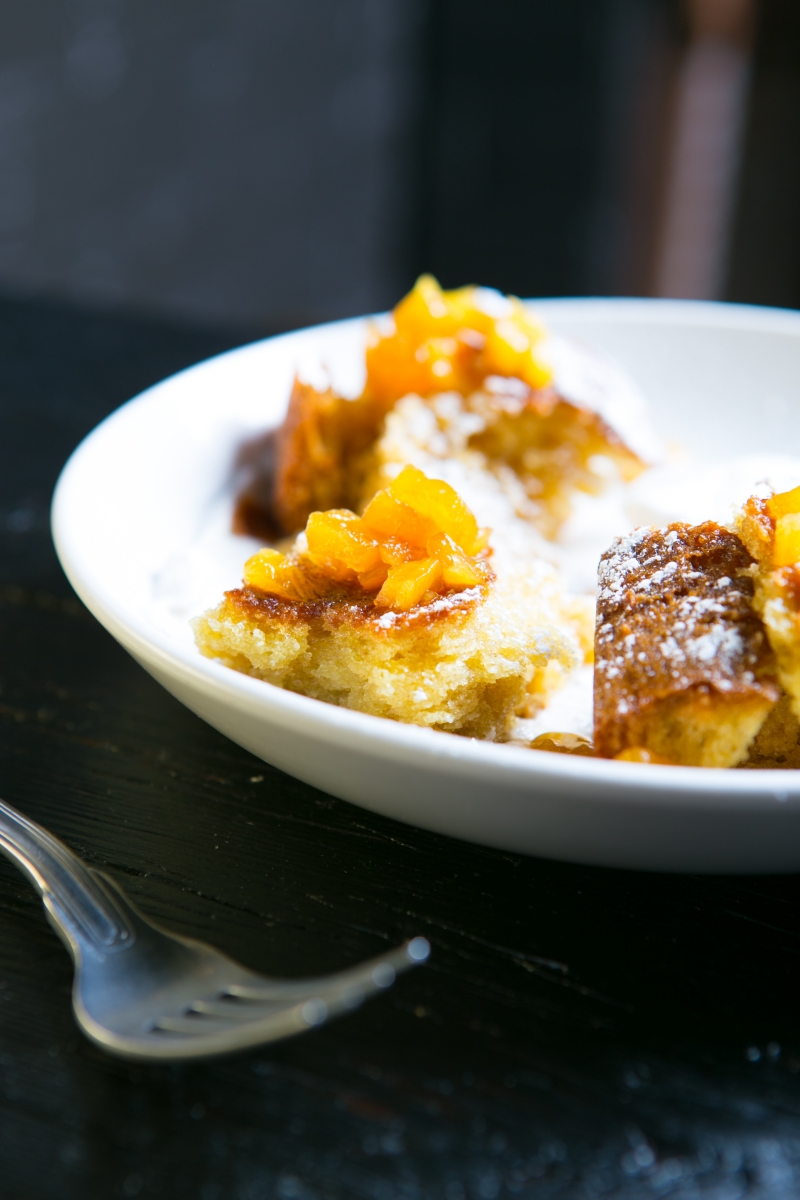 My favorite dishes at Station — and also the most restrained — are the desserts. Gamble began drawing Pittsburgh praise for his popcorn panna cotta while he was previewing Station; it was a hit at our Best Restaurants party in June. I like the lavender pound cake even more. It’s warm spice, and very light. I love the slightly salty top (finally, a good use of salt) and the accompanying pineapple compote. I could eat this every day.

Still, Station is a restaurant, not a dessert destination. As much as I enjoy the experience of dining there, it’s challenging to leave Station feeling light and free. I believe in Gamble. I hope he’ll peel back and find some refinement during the next few months. 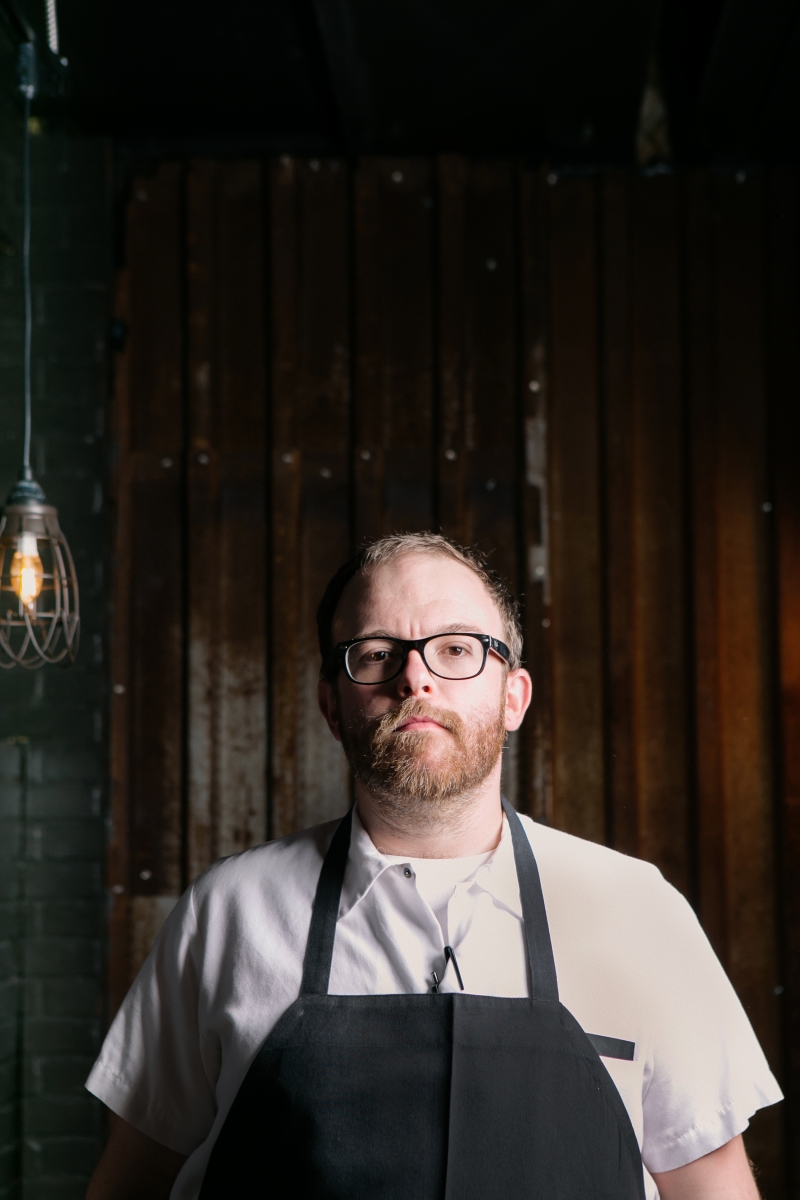 How did you approach developing the menu for Station?
We were pretty deep into renovations before I even wrote the menu. There were some things we knew we were going to do because they worked well at pre-opening events. We knew what the burger was going to be. We knew what the corned beef was going to be. Then, it’s ‘Let’s look at traditional flavor profiles and see how we can present them in our own way.’ Next it’s plugging in the techniques for that. I’ve always been big on developing techniques more than simply recipes. A lot of what happened here — I’ve been fortunate enough to work at great restaurants and collaborate with a lot of people — is that I was able to take all those techniques and plug them into this menu.

What’s your thought process regarding using modernist technique in a more pub-like atmosphere?
When it [modernism] started happening, it was exciting for young chefs, and so there were a lot of bells and whistles. We’d all been making roux and demiglace our entire lives, so this new stuff was exciting. But now I think it’s more about the ingredient. Considering we’re a pub, we source a ridiculous amount of food locally. So what’s the best way to convey the flavor we want on a dish? We have this carrot purée — that’s a great example. We want it to taste more like a carrot than a carrot ever tasted. So that means we don’t want to put any butter in there because you’ll taste fat before you taste carrot. So we get modern for a really clean taste, and it’s carrot juice, carrots, gelling gum and sherry vinegar. But the customer shouldn’t think about how we circulated it in an 85-degree bath and put gelling gum in it.

Where do you think food is going next?
I think there are two ways to look at it. When you look regionally at western Pennsylvania, the demographic of Pittsburgh diners is finally catching up to the idea that white tablecloths and nice flower arrangements don’t necessarily dictate quality of what you’re eating. That’s the next big step for Pittsburgh. Pittsburgh is really behind the curve on that. As far as bigger picture, sourcing is going to continue to be important. Being able to eat quality-sourced foods in a quick, casual environment is where we’re going with that. The big question is, how willing is the consumer going to be to pay for quality food? The food that you eat is just as important as paying for your cellphone.

This article appears in the December 2015 issue of Pittsburgh Magazine.
Categories: From the Magazine, Hot Reads, Restaurant Reviews