Despite an inconsistent start, Christian Frangiadis' restaurant now is worth visiting. 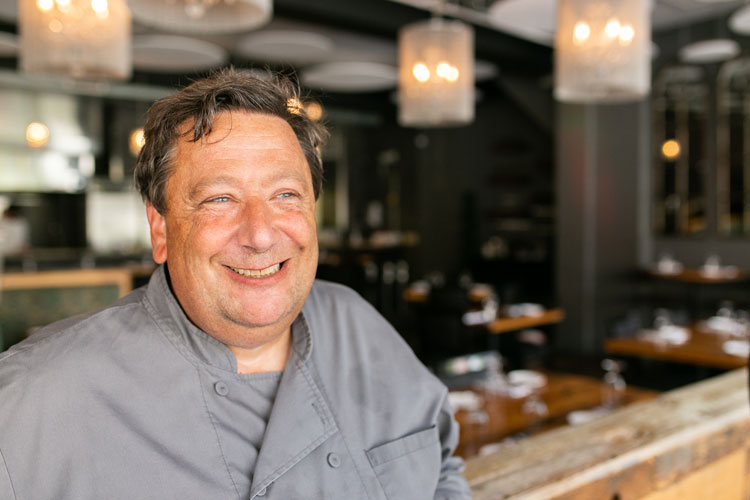 In 2001, Christian Frangiadis was at the top of his game. His latest restaurant, Isabela on Grandview, was named Pittsburgh Magazine’s Best New Restaurant, adding to a list of honors piled on a chef who, since the 1990s, sat at the pinnacle of Pittsburgh dining.

Even with the accolades, Frangiadis, now 55, was frustrated with the slow growth of the city’s restaurant scene, hungry for an environment where diners were more adventurous and willing to spend money on a weeknight rather than limiting themselves to dining out on Friday and Saturday nights, which was the case at the time. So, in 2003, when a friend offered him the opportunity to run a restaurant in Saint Thomas in the United States Virgin Islands, he bit. Over the next decade, he steered a couple of restaurants, met his wife and had a daughter.

By this time, Pittsburgh offered an amped-up dining scene, with restaurants opening at a quick pace, a growing number of open-minded diners and the attention of the national media for the city’s civic and culinary revival. That, plus a desire to raise his daughter in Pittsburgh, prompted Frangiadis to reach out to an old friend, Andrew Tepper, who was interested in funding his restaurant.

Tepper, active in the national and local Burning Man community, gathered a group of his artist friends to design and build a mixed-materials space in the Bloomfield building that previously housed the low-key vegan restaurant Quiet Storm. They spent nearly two years crafting a harmonious, open concept room that’s neatly sectioned off into a bar, chef’s counter and main dining room with a layout that allows each space to feel distinct yet doesn’t distract from the overall energy. Picture windows flood the dining space with natural light, and there are some subtle details throughout the restaurant; the multi-level shelving of the bar is especially eye-catching. Tepper equipped the kitchen with top-line materials for the culinary team. 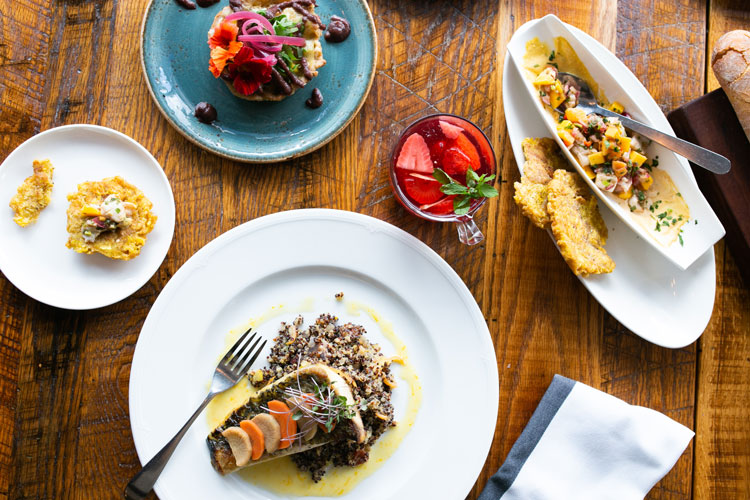 Despite the strong setup, Spork’s 2016 opening wasn’t as smooth as Frangiadis anticipated. The menu was a hodgepodge, organized into silly categories such as “Gnosh” and “Vario.” His staff was green and they weren’t speaking a common language, which meant inconsistency in execution. Much of what was served was OK at best. Some dishes came in mason jars. Meh.

What a difference a couple of years makes.

Frangiadis is a chef who values loyalty, and to that end he’s retained and mentored a significant chunk of his opening staff and rounded out the team with strong players. Spork now has an identity, albeit sometimes a split one: Spork is a garden-to-table restaurant (though this will fade as the establishment’s fabulous garden season comes to a close), a contemporary restaurant with strong ties to the Caribbean and an upscale pasta joint. That’s not necessarily a bad thing — for the most part, this works. 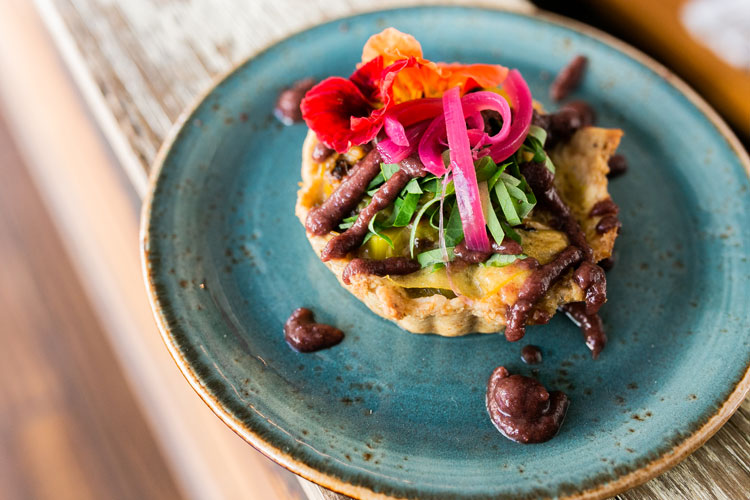 The best dishes I had in July and August all began in the restaurant’s garden, augmented with produce from local purveyors such as Tiny Seed Farm. I’m an avid gardener, which makes me a real jerk about tomatoes; I can count on one hand the number of knee-smacking restaurant tomato dishes I’ve had over the past few years, but Spork’s tomato tart is on that list. The tomatoes tasted as if they were hand-picked moments before being gently heated with melted leeks, crisp cucumber and peppery nasturtium leaf inside a flaky-yet-sturdy olive oil crust. A caprese flatbread topped with chunky tomato and vibrant basil almost had me pounding my fist on the table, too.

Lemon-cucumber salad, which featured crisp and refreshing lemon-cucumbers, vibrant cherry tomatoes popping with sweetness, salinity from feta and thin slices of pole beans for vegetal crunch, was precisely what I wanted to eat on a hot August night. On top of that, on all of my visits, the garden salad tasted just as a garden salad should for the time of year, with subtle changes to the mix as the summer progressed.

Large format plates showed off the vegetables from the garden, too. King salmon, seared hard on the outside and a perfect medium-rare inside, was accompanied by compressed cucumbers and banana peppers, crunchy and full of vinaigrette, which the culinary team added during a second compression of the vegetables. Frangiadis says the dish started with him trying to figure out what to do with an overabundance of cucumbers. It finished as one of the better plates I had all summer. 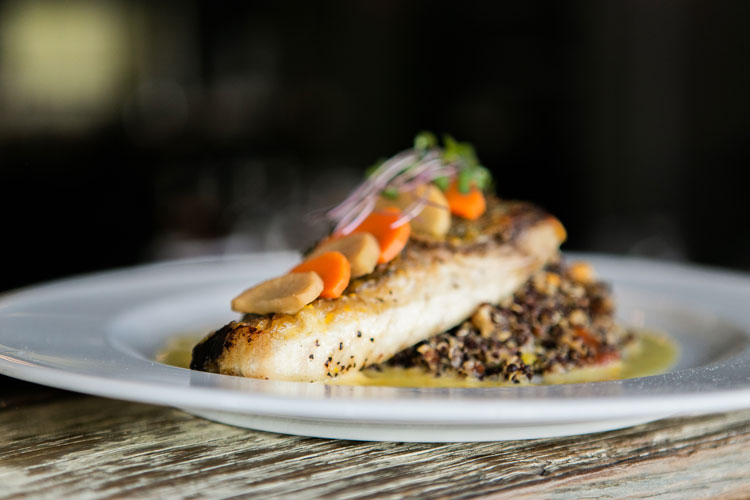 His Caribbean-inspired selections — most apparent in seafood selections but also scattered throughout in other dishes — are strong menu choices. Beautifully seared opah, meaty yet tender, was served with yellow plantain, fennel pollen, pistachio, slivered green beans and a nasturtium and butter pesto. The composed plate, a little smokey, a little sweet, was a rooted, soulful dish that borderlined on transportive. Ceviche is a reliable choice for a starter — the redfish, mango and red and yellow chili cream version I had was terrific, with clean-tasting fish, sweetness from the mango and bright color from the peppers.

The restaurant’s pasta selections, a holdover from Spork 1.0, are the least consistent. Some, such as Straw & Hay, with lonza, pesto, asparagus, ricotta salata, preserved lemon and toasted panko, are complex in both texture and flavor. Although I quite enjoyed brisket ravioli on one of my visits, I found it just kind of fine on another. And a spaghetti offering was terrible. It tasted like noodles left on the counter for too long that have half-lost their moisture. Considering how strong the garden and Caribbean dishes are, I don’t think Spork needs a pasta section — but if Frangiadis decides to keep it, this is where there is the most room for improvement. 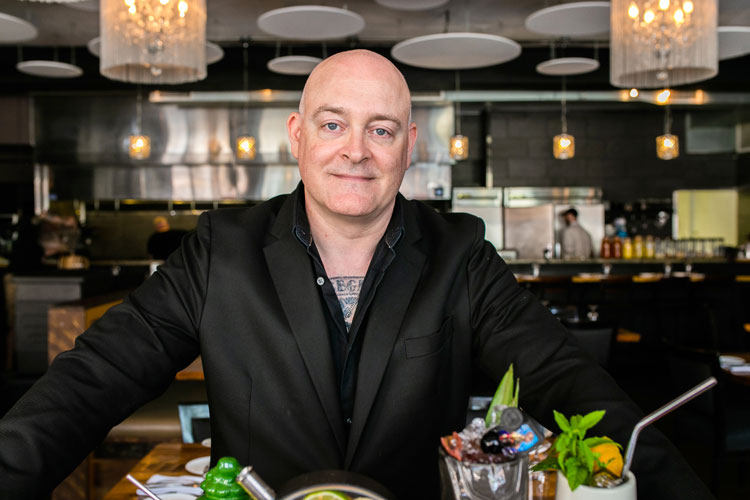 One of Frangiadis’ best decisions, which certainly helped Spork find its footing, was hiring Sean Enright, one of Pittsburgh’s most experienced restaurant industry veterans, as general manager in early 2017. Under Enright’s leadership, service is engaged, energetic and professional, and the vibe in the restaurant is fun. The one-time college DJ oversees a dynamic playlist that tilts toward ’80s New Wave, classic punk and ’90s alt in all the right ways.

Enright, a founding member of the Pittsburgh chapter of the United States Bartenders Guild, developed Spork’s cocktail menu with significant input from assistant manager Olivia Lindstrom and lead bartender Wes Burdette. Their mix of classic, tiki and contemporary builds makes for one of the best-executed drink menus in the city; even the creative drinks are rooted in classic technique. One of my favorites is piña, a blend of Pelotón de la Muerte mezcal, pineapple shrub and pepper tincture that is smokey, funky fruit served in an oversized ceramic pineapple. The bar’s Mai Tai is a textbook version of the tiki treat which means that imbibers should be aware of its potency in relation to how easy it is to drink. 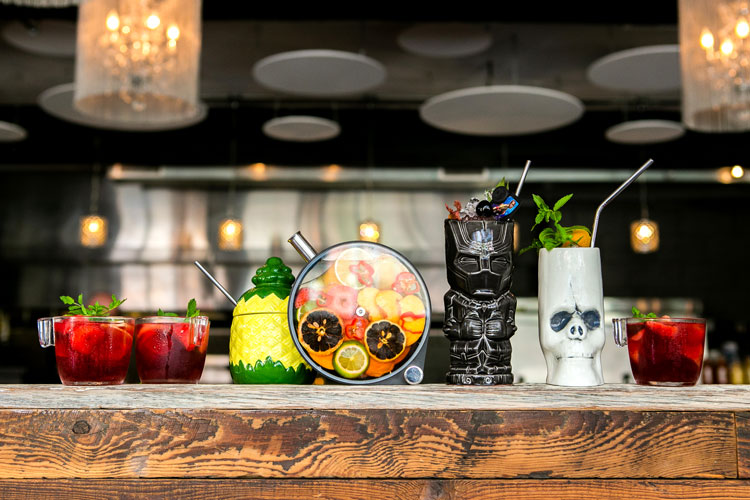 I’m curious to see how Spork’s menu will transition now that the garden season is ending, and how the Frangiadis’ team will employ the host of produce they pickled, fermented or otherwise put away for the off-season, as well as how they manage what will become a greenhouse garden in the dead of winter. I also very much hope that Frangiadis continues to demonstrate and deepen his flair for island cuisine; it feels as if this is the food he is most excited to prepare.

I’m glad I didn’t give up on Spork. It’s refreshing to see an establishment grow into what it was meant to be. If you dismissed Spork early on, give it another go. If you haven’t yet been, now is a good time. And if you’re clued in, well, you already know that this is a great place to eat.

This article appears in the October 2018 issue of Pittsburgh Magazine.
Categories: From the Magazine, Hot Reads, Restaurant Reviews