With a touch of Zen, creative Pan-Asian cuisine and a dedicated staff, this East End dining destination continues to build on its success.

For many of us, Soba is like an old friend. We can rely on this restaurant to be there for us when we want to celebrate a special occasion, meet friends for drinks after work or just have a nice night out. Moreover, who can resist a restaurant self-described like this?: “A dark and sexy Zen garden with sleek acolytes silently attending to its guests, Soba offers a distillation of Asian daydreams grounded in the hearty Earth.” And let’s not forget the food—its Pan-Asian cuisine remains consistently grounded and innovative.

A fixture in the East End for 13 years, Soba continues not only to survive, but also to thrive, despite the ups and downs of the economy.

So what has been the secret of Soba’s success through the years (besides the Zen and daydreams)?

As for the present and future, one promising portent was the appointment of Danielle Cain to executive chef in May. Soba, as you likely know, is part of the locally based big Burrito restaurant group, which has brought us the celebrated restaurants Casbah, Eleven, Kaya, Mad Mex and Umi. As a large restaurant group, big Burrito has the luxury of being able to hire, train and rotate staff between restaurants, nurturing talent into leadership positions.

Cain truly is a product of this system. After finishing culinary school here in Pittsburgh at Pennsylvania Culinary Institute (now Le Cordon Bleu), she did her apprenticeship and was a line cook at Casbah before she was promoted to sous chef. Then she moved to Soba as sous chef. And she spent one year as executive chef at Kaya before returning to Soba in her present role.

Cain talks about a terrific camaraderie among the big Burrito chefs, who dine at each other’s restaurants and share ideas. She has a special affection for Soba because she feels it’s very “communal” in terms of fine dining: Soba customers like to share their dishes and pass them around; the lively bar scene is its own community within the restaurant; and the staff, which includes sous chefs Andrew “Red” Jacobson and Dustin Gardner and pastry chef Shelby Gibson, enjoys a genuine esprit de corps that makes working there fun. All the positive energy in the kitchen, Cain contends, leads to “happy food.”

Asked to comment on how she addresses the need to produce consistent food, Cain is confident in her managerial methods of hiring and maintaining a strong staff, making sure everyone in the kitchen has trained at every station and could trade jobs in a pinch, procuring quality ingredients that are interesting and insisting on the importance of the kitchen staff tasting the food before it is delivered to the customer. 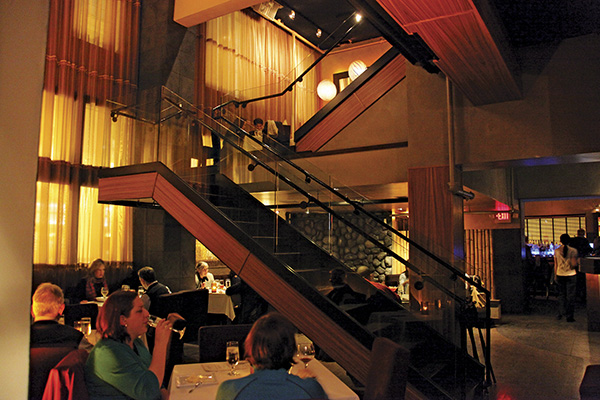 The menu has many old favorites and some new dishes designed by Chef Cain and comprises “Small Plates,” “Soup and Salad,” “Entrees,” “Noodles,” “Sides” and “Wine Features.” There’s also a dessert menu.

For many people, myself included, the “Small Plates” are the best part of the restaurant. Highlights include the Blue Bay mussels ($9)—a dozen or more complemented by a white-wine garlic broth with chunks of spicy Thai sausage and doused with homemade aioli. Other notables are the crispy tofu ($7), which features a large helping of sweet, spicy and crispy cubed tofu tossed with cashews and lemongrass sauce and the fried and salty calamari ($9), which is seasoned with chilies, toasted garlic and an uni emulsion drizzle. Less impressive are the fried pork dumplings ($7), lobster maki ($11) and crab cakes ($11). All of these can be somewhat bland either in flavor or texture.

Among the soups, Thai corn chowder ($7) with crabmeat is always a winner. Although it has varied in texture, cream and spice levels through the years, my most recent tasting amounted to perfection—nicely pureed, a small but ample amount of crab and not too much cream.

An unexpected treat under “Sides” was the house-made pickled vegetables ($3). It turns out that sous chef “Red” Jacobson loves to pickle. The pickled vegetables—beans, cucumbers, cauliflower and carrots—were fresh and crunchy, each with a slightly different accent provided by garlic, orange or onion. Look out for his new batch of kim chi, made in November and currently pickling for release this May.

The chopped salad ($8) is a refreshing mix of papaya, mango, daikon, coconut tempura, cucumber, avocado, iceberg lettuce, mint, basil and cashews with a spicy miso dressing. It’s more like a palate-cleanser than a salad and can be a great intermezzo between courses.

Among the entrees, the beef short ribs ($26) are dreamy—savory and spicy with the meat falling off the bone. Sea scallops ($26) are wok-seared on the outside and soft on the inside with a limey broth; they’re served with seasonal mushrooms, fresh wasabi ponzu, root spinach and udon noodles. The popular seared rare tuna ($27) is a colorful delight. The dish begins with a single large slice of tuna with a bright-pink center and is finished with a sesame crust topped with a generous dose of Korean barbecue sauce. It’s served with a light cucumber and red-onion salad, ginger fried rice and a side of kim chi.

The “Whole boneless crispy bronzini” ($26) came through as promised: fried whole, complete with head and tail, with plenty of fresh white meat. Unfortunately the dish was diminished by a butternut-squash and potato-hash filling that was more mush than hash and did not complement the fish. A boneless pork chop ($22), although attractive, was so salty that I couldn’t eat more than one bite.

A creative dessert menu brings together Asian and American themes. Among four desserts I tried—huckleberry crème brûlée ($7), Soba banana split ($8), chocolate caramel bombe ($8) and a chocolate maki ($6)—the maki was my favorite to look at, and the banana split was my favorite to eat. The maki offers lovely sushi rolls made of chocolate-pistachio crêpes filled with dark-chocolate mousse; they are accompanied by pistachio cream, shaved melon and chocolate sauce—stand-ins for wasabi, ginger and soy sauce, respectively. The banana split comprises three scoops of house-made ice cream—dark chocolate, huckleberry jasmine and black rice—sitting on a fluffy banana cake with a side of brûléed bananas.

When talking about Soba’s success, the bar must be mentioned as an essential component. The dark slate walls and crackling fireplace make it a cozy spot, perfect for chatting and people-watching. (Yes, it’s somewhat light-challenged, but just ask the bar server for a tiny big Burrito flashlight if you need one!) 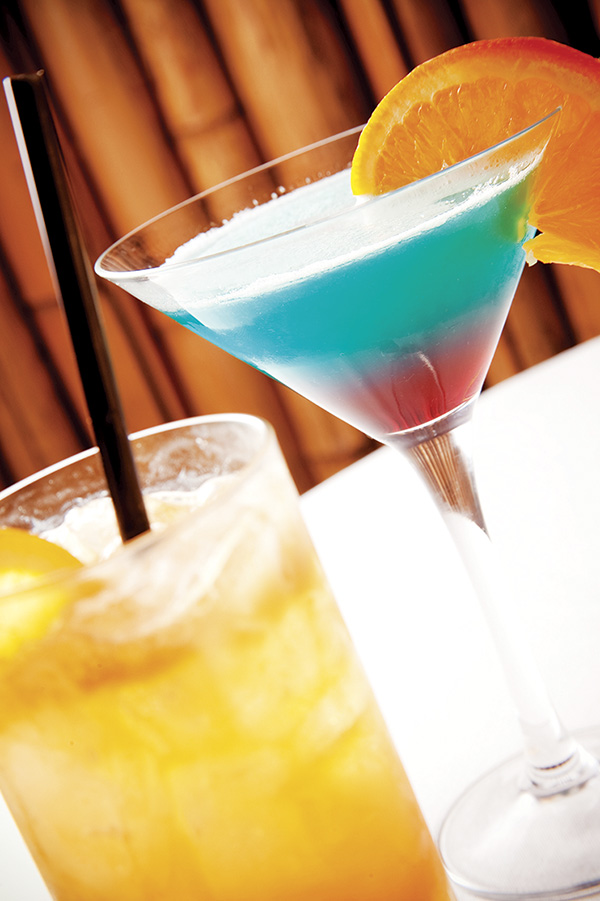 The bar menu—an impressive 16-pages long—includes a full page each of martinis and cocktails ($8-$12), wines by the glass ($8-$16), sakés ($9 carafe to $150 bottle), bottled beer ($4-$17), an extensive menu of wines by the bottle and after-dinner drinks. Looking at the “Small Plates” again as bar food, a nice selection of flavors, textures and temperatures—sweet, fried, spicy, hot—complements whichever beverage you choose.

The kitchen and bar staffs work together to infuse mixed drinks with interesting house-made ingredients—including pickle juice, a delightful component in Red’s Dirty Martini ($10), which, thanks to a recommendation by a server, I decided to try. I discovered a light, dry martini made of cucumber-infused vodka and the pickle juice. What’s more, there’s even a house-made pickle slice floating where you might typically find an olive or twist. Its subtle, vinegary edge was an especially welcome contrast to the richer appetizers. Bangkok Tea ($9.50)—green-tea-infused Absolut, fresh sours mix and homemade honey-ginger syrup, all served in a tall glass over ice—was lightly sweet and refreshing.

You can take it for granted that the service at Soba will be good. The servers here, some of whom have been with big Burrito for years, are competent, well-trained and knowledgeable about the food and drinks. In fact, another factor in this restaurant’s success can be attributed to the emphasis Soba places on the customer. As Ryan Burke, general manager since 2005, explains, the Soba team knows regular customers by name and remembers exactly what and how they like to eat. (No wonder it’s best to make a reservation. You can expect a good turnout any night of the week.)

Although the décor has remained mostly the same through the years, the environment at Soba is still inviting with the sensual water wall, zebra-wood accents, Asian-influenced artwork and more intimate upper floors as well as a second-floor deck, a harbinger of warmer weather ahead.

This article appears in the April 2010 issue of Pittsburgh Magazine.
Categories: From the Magazine, Restaurant Reviews