Restaurant Review: Scratch Food + Beverage is King of the Hill 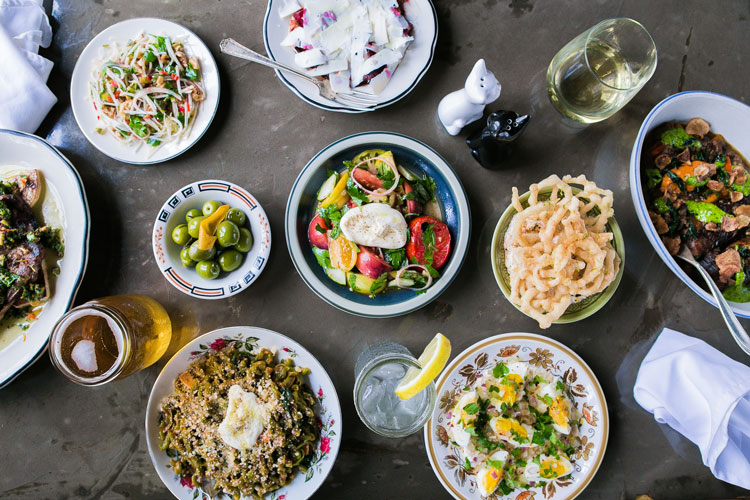 The establishment had a hard time finding its footing as restaurant, however, working through several chefs — including a brief moonlight from Kevin Sousa (Superior Motors) — in the process of trying to fill its charming, inviting dining room.

That changed in March when Brandon Blumenfeld took over as executive chef. Now, it’s one of my favorite places in Pittsburgh for a casual meal.

Blumenfeld is a fourth-generation Pittsburgher who cut his teeth in esteemed New York kitchens such as Momofuku Noodle Bar and Franny’s before returning in 2014. In Pittsburgh, he’s worked at Cure, Spirit’s Slice Island pizza shop and Morcilla. 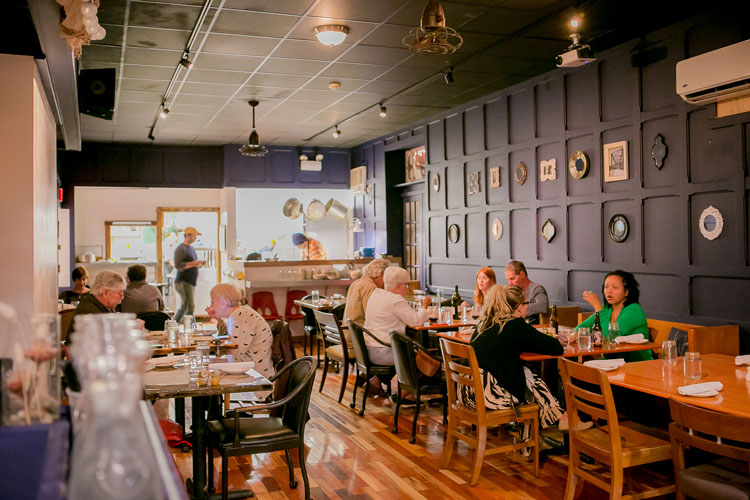 If you had the time and skill, there isn’t much on Blumenfeld’s menu you couldn’t make at home. But Blumenfeld’s nuanced touches elevate the dishes at Scratch into something worth paying for.

For example, a crisp butter-lettuce salad sings sweeter than its generic counterparts because it’s enhanced with the perfect array of herbs, spiked with toasted seeds for a nutty crunch and tied together with tangy, homemade buttermilk dressing. And there’s the creamy corn dip lashed with back notes of bacon served with airy zeppoli that pops when you eat it.

The best way to experience Scratch’s menu is to order a bunch of items and eat communally, but you wouldn’t know that from the table settings; adorable teacup plates — part of a slick selection of vintage service vessels — are what are offered for shared dishes. You’ll likely find yourself hoping, as I did, that one of the servers would give you a large plate as they pass your table while walking toward the kitchen with a stack of them. Service otherwise is friendly and efficient, like a neighborhood diner staffed with experienced, high-end service-industry veterans. 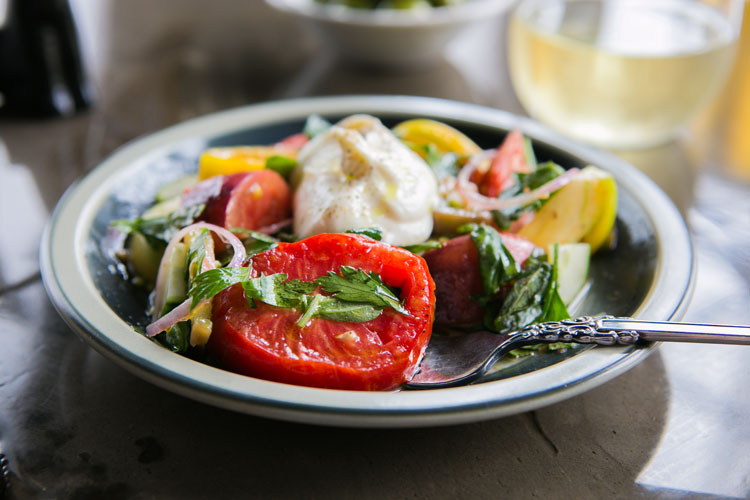 Blumenfeld’s attention to seasonality is particularly noticeable in the “Smaller Plates” selections. A peak-summer heirloom tomato salad was 95 percent as good as a salad I would make from my garden; that’s an extraordinary feat for a restaurant. Once again, it was little details, this time in the form of parsley, basil, bronze fennel and a touch of vinegar, that enlivened the dish. He nailed it again with zucchini, which he minimally cooked to a still-toothsome texture. Zucchini recipes often are dull, but the addition of toasted almonds, goat cheese and slivered red onions made for a dish that was fresh, light and flavorful. “This is the most fun meal I’ve had in a long time. Everything is exciting, but it also feels real and comfortable,” a friend said.

I like Blumenfeld’s comfort food just as much as I like his seasonal cuisine. Have you been a little less than sober at 3 a.m., eating bacon, eggs and hash-browns at a diner and think you were eating the best plate of food imaginable? Blumenfeld’s pork belly dish — with an egg that’s crispy on the edges and runny in the center, pork belly with fat that’s rendered so that it is tender, crackling and a little gooey all at once and potatoes that are both soft and crunchy, tied together with Aleppo honey — is exactly what you imagine that food tastes like at the time (but this is memorable even when you’re sober). 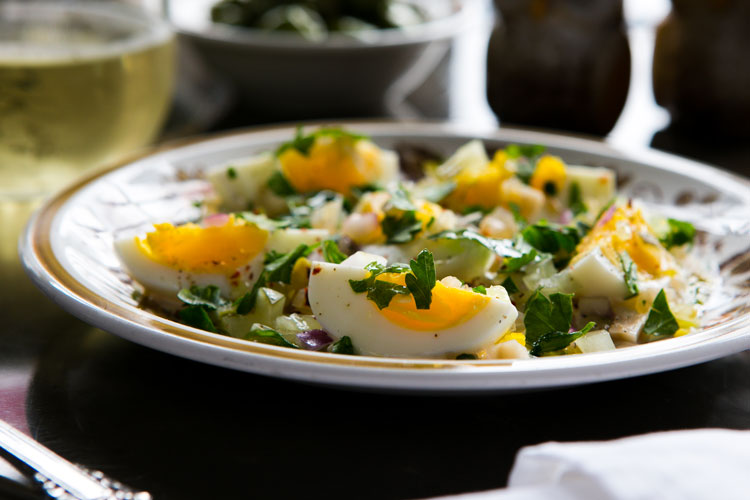 The juicy fried chicken with a thick, crispy crust was so tasty that a dining companion was still talking about it several days later. I wanted to order the succulent thighs seasoned with cayenne and dressed with a piquant buttermilk on a subsequent visit but managed to restrain myself to try something new. I was back at it on my third visit, once again face full of chicken — but also once again wishing it was served with something more than a piece of bread and a few pickles.

It’s a shame that every item on the “Golden Summer Favorites” themed cocktail list tasted as if golden rays of sunshine melted high-sugar summertime popsicles into a glass. Owner and general manager Don Mahaney, himself a longtime service industry member, says he’s in the process of sorting out the saccharine sippers and overhauling the cocktail program. Sugar-booze aside, the bar still is a fun place to hang, particularly for Tuesday night trivia and Friday karaoke, which ranks among the best in Pittsburgh.

Scratch is a restaurant with enough heart and soul to draw you in, and food so tasty you’ll keep coming back; it’s the type of place you could become a weekly regular. That’s not surprising with Blumenfeld at the helm. He is a rising star chef who is just starting to make is voice heard in the city. We’re going to hear a lot more from him. 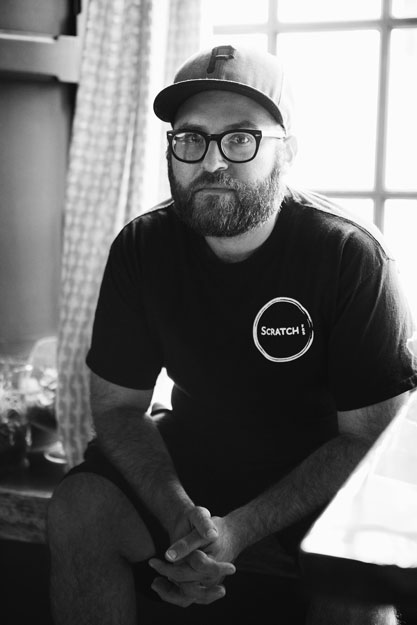 How did you approach designing the menu for Scratch?
I want the menu to be accessible but also to elevate the food to a degree that it’s not something you’re going to get from your average neighborhood restaurant. It’s something that’s between a dinner that you can imagine yourself eating multiple nights per week but made with a little bit of a more refined mentality. I’m also trying to stay hyper-seasonal by working with farmers and foragers.

What farmers are you working with?
We get produce from Cherry Valley Organics, Tiny Seed Farm and Rescue Street Farms. And then we have some foragers in Troy Hill that help us out when we want things like fiddleheads and chanterelles. My goal is to get to a point where just about everything we serve is from 150 miles or so from the restaurant.

You’re bringing a lot of different tools from your background into what you’re doing here.
I’ve worked everything from being a dishwasher to working in the kitchen of a fine-dining, Michelin-rated restaurant. Throughout all those experiences, I’ve realized that it was important to try to emulate the people I respected and try really hard not to act like the people I came to not have respect for in their management style.

What chefs do you look up to?
John Adler (Franny’s) is the most complete chef that I’ve ever worked for. I’m not even close to half the manager he is, but he taught me so much. There are some talented young chefs that I’ve worked with or admired over the years. I never worked with Joshua McFadden (Ava Gene’s/Tusk), but he has a hyperlocal, best-of-the-best style of cooking that’s admirable.

Where do you see this going for you?
Something in the past that’s interested me is starting a restaurant group, but I don’t think I’m quite there yet to be able to do all the things that I want to do. I think Pittsburgh is at the point where people can appreciate a thoughtfully prepared meal instead of needing three pounds of food on the plate to say it was a good meal. There are a lot of things happening here that I’m excited about. Becca (Hegarty, Bitter Ends Garden) and her bread/pastry making, for example. My generation is starting to find its foothold. There are so many talented people, not just in food but also in art, business, music, technology, that are making things happen. I’m really stoked for things to come. I see myself staying in Pittsburgh.

This article appears in the October 2017 issue of Pittsburgh Magazine.
Categories: From the Magazine, Hot Reads, Restaurant Reviews