Salem’s offers accessible and delicious meals for Pittsburghers of all stripes. 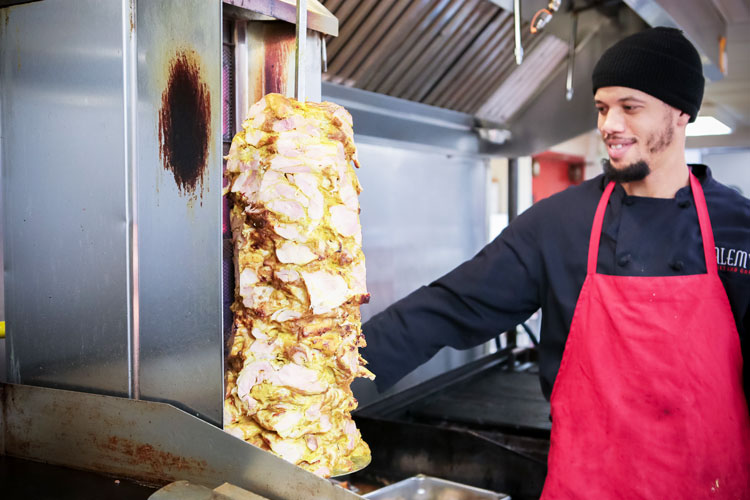 The lunch crowd at Salem’s Market & Grill in the Strip District is a Pittsburgh panoply. Cops-on-the-beat eat plates of chicken curry alongside social activists scooping bowls of lentil soup. A table of international students chows down on kofta kebabs next to a group of recent technology-sector transplants sharing a pile of lamb chops and naan.

Down a few tables sits a family in traditional Middle Eastern apparel crushing hamburgers. Salem’s very well may be the most democratic dining experience in Pittsburgh.

One through-line ties it all together. A pal of mine vocalized it during a January visit: “Delicious,” he muttered throughout the meal. “Delicious.” 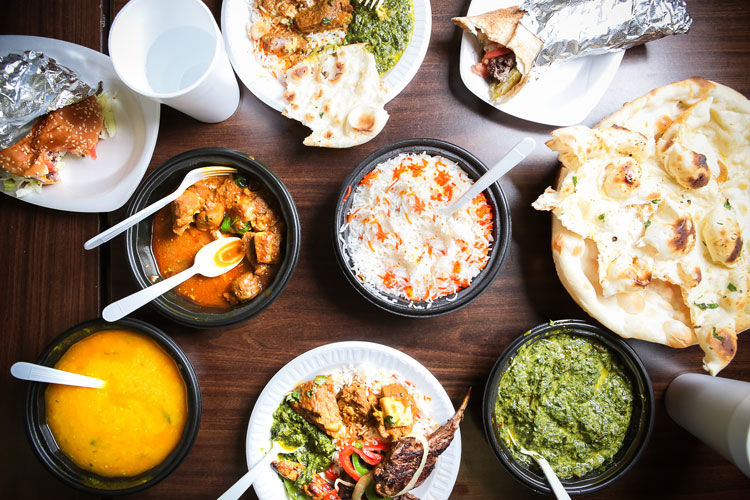 ​Massaud Salem opened a halal butcher shop in Oakland in 1981, and, according to his son Abdullah (who now runs the business), started selling lamb and chicken curries in the late 1980s because he didn’t want to waste unsold meat. The curries caught on, and soon a limited selection of other dishes were added to the menu. The menu further expanded when the business moved to its current Penn Avenue location in 2010; Abdullah says they still are adding dishes, too. All meat served at Salem’s is direct-from-the-source, whole-animal processed according to halal specifications in the adjoining butcher shop. Not only is it some of the freshest, best-sourced meat you will find in a Pittsburgh eatery, but it’s also offered at a lower price point than most establishments because of the compressed commodity chain.

Salem’s isn’t your typical sit-down restaurant, having more in common with New York City deli hot-bars and old-school lunch counters than with hip, contemporary fast-casual concepts — nevermind a formal dining experience. Customers line up to order from the grill menu of (mostly) Middle Eastern dishes or select items from the steam tray filled with Indian- and Pakistani-influenced cuisine. Meals are served in styrofoam containers as if the diner might want to sport off halfway through lunch. 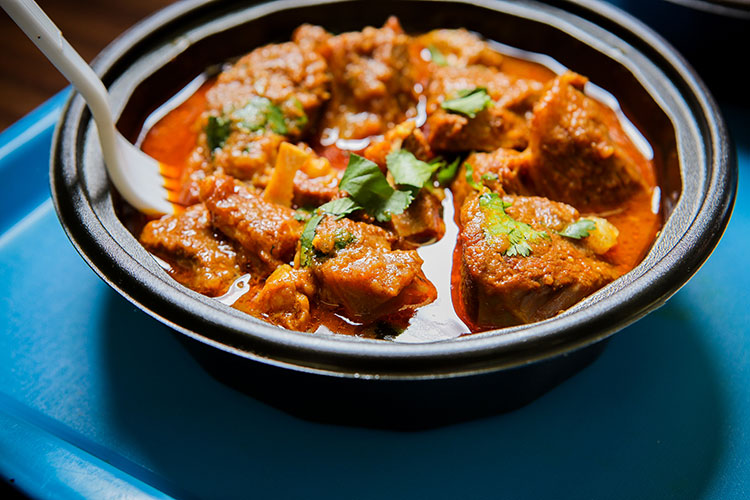 The easiest way to navigate Salem’s is to order from the hot bar, where heaps of food — enough for at least two meals — will be loaded onto a bed of nicely cooked basmati rice. My favorite item from the hot bar is lamb curry. It’s meaty, chewy and served bone-in, lusciously flavored with just enough spice to warm the palate and just enough fat to coat your tongue; goat and chicken curries also are terrific choices.

The only hot-bar item that I consistently find disappointing is chicken tikka masala. Dry breast meat served with a slightly cloying tomato sauce feels as if it’s thrown in to cater to the unadventurous diner, but prepared the way it is, it will only further turn them off.

Hot-bar items are served with a choice of side dishes. Get the spinach paneer. It’s creamy spinach bolstered by coriander seeds, warm pepper and small, salty cubes of paneer. “I’m not even trying to be polite. Frankly, I’m eating it as fast as I can so I can get as much of it as possible before you make me share it,” said a friend. 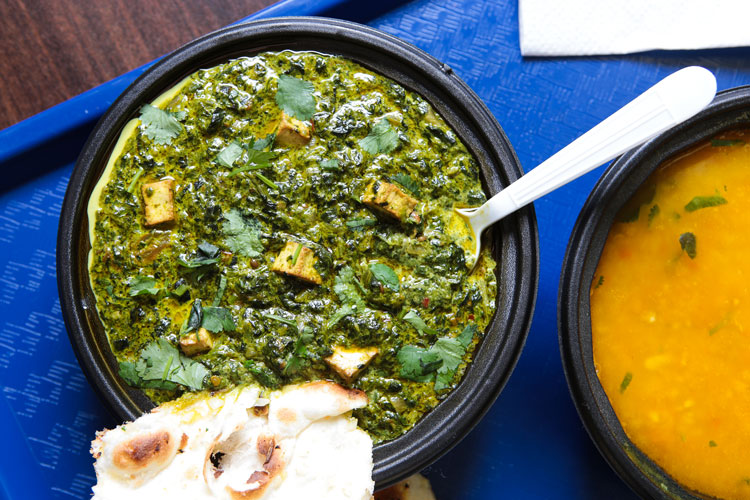 Salem’s also offers an extensive selection of items “from the grill,” and from this menu are some of the best bites in the restaurant. Seekh kebab, made with ground chicken (also available with a blend of ground lamb and beef), is flavored with red pepper and parsley, browned deeply on the outside and so good that you’ll want to order another one. Get it with an order of naan. The bread is cooked in one of the restaurant’s two tandoors to hot, puffy pillow perfection. “This,” a friend muttered as she ripped a piece and dipped it into earthy lentil soup, “is heaven.”

Thin, tender lamb chops ringed by flavorful fat taste like backyard barbecue. Because you can order them by the chop, why not just throw one or two in with your meal? Or if you are a vegetarian, you should opt for the above-mentioned lentil soup and spinach paneer, and also consider ordering a falafel sandwich. I love the brine of the pickle but dislike the out-of-season tomato (can we just agree to eliminate these?). 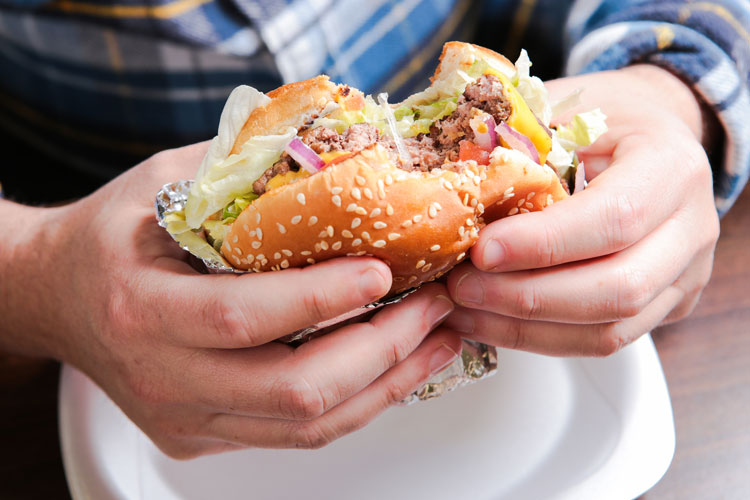 100% halal meat allows for everyone to enjoy hamburgers at Salem's

Salem’s offers a hamburger that, topped with shredded iceberg, tomato, American cheese, mayonnaise and red onion, is a prototypical Classic American Diner burger. The meat, which could be seasoned a bit better, is ground from the whole cows — up to five — that Salem brings in each week. It’s good, and, more important, a loveable menu addition that allows halal diners to eat something that’s ubiquitous in the United States yet generally not available to them because of the limited availability of halal meat in restaurants.

My biggest wish moving forward it to see fewer of the incongruous piles of styrofoam and plastic pile up in the garbage cans in a space that otherwise feels as if the core of its mission — affordable price-point, welcoming service and an all-around spirit of inclusiveness — is to do what it can to make Pittsburgh a better place. Well, Abdullah Salem also mentioned they’d toyed with the idea of putting fried chicken on the menu. I wouldn’t mind seeing that, too. 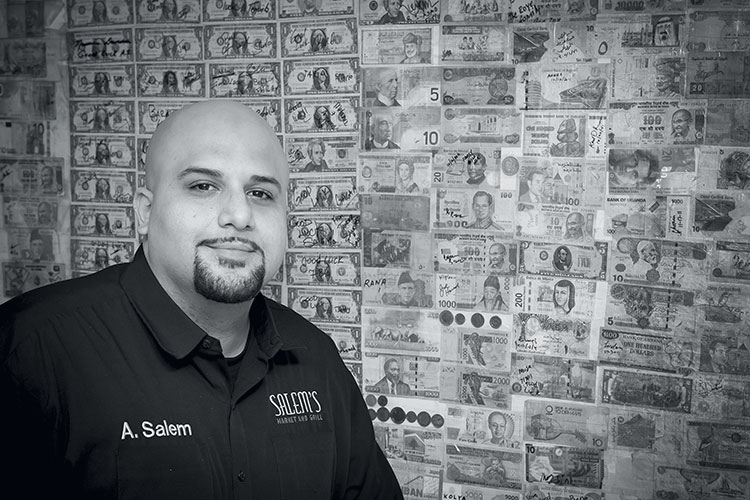 This is an extraordinarily democratic dining experience.
That’s the most important thing there is. Our motto is: “it’s the closest thing to back home no matter where you’re from.” I believe this might be the most diverse demographic you will find in one location in Pittsburgh. In the same line, there is a lawyer from Downtown, a Jamaican from up the street, an African Somali or Sudani family, an Iraqi couple. And we have over 10 nationalities that work for us.

What’s the story behind the butcher shop?
We do it the old-fashioned way. We buy everything live, locally. We process everything ourselves from carcass to table. Anybody who comes to America from anywhere else, they think it’s strange to go to the grocery store and purchase meat the way it’s sold here. People want to get it fresh, from a butcher. Nothing is held over by chemicals or packaging or coloring. We process a lot of meat directly from the source, so it allows us to keep the prices low.

How did the menu develop?
Our food represents the customer base. We’re from Libya, and our first curries represented that. Then we had Pakistani customers ask if we could cater events and that tasted good, so we put it on the menu. Slowly but surely as time developed, people would ask for stuff and we’d try it out and when we liked it, it would make it onto the menu.

We’re halal. So we have a certain sector of our customer base that comes here because they want halal food, or kosher food, which is very similar. So for example, you can’t get a halal burger anywhere. We were making burgers a couple of years ago just for us, and then we realized that some of our customers might want them, too. People come in here who have never had a burger in their whole life. Our people are looking for American food, and the American-born customer base is looking for international food. We always are developing and growing and adding new items. Everyone wants to eat wholesome food at a low price.

People want to have food at a low price but now also care much more about where their food is coming from.
One of the big things for us is our relationship with the people that come here. We mess up just as much as everyone else, but people tend to forgive us because we aim to be friends with our customers. Everyone feels invested here. We’re part of the community. Our main goals are freshness and quality. Everything is simple.

This article appears in the March 2017 issue of Pittsburgh Magazine.
Categories: From the Magazine, Hot Reads, Restaurant Reviews