Richard DeShantz steps it up with a move from Downtown to Lawrenceville and shows Pittsburgh how to make French dining fun. 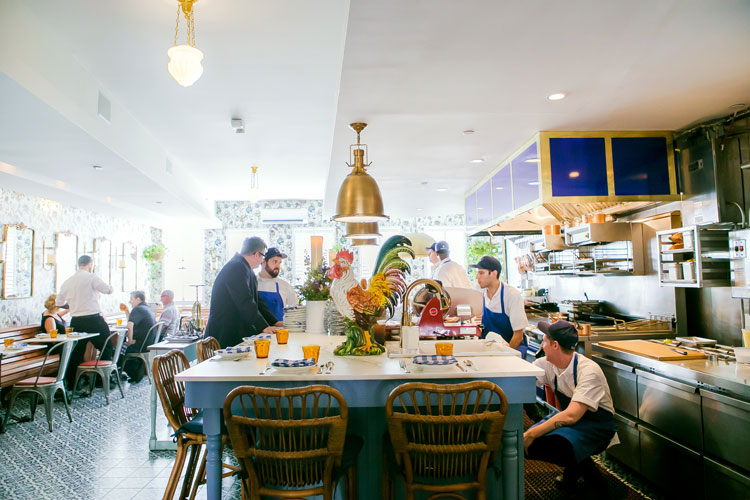 Richard DeShantz made a name for himself Downtown with four restaurants that are as much drinking destinations as they are eateries. With Poulet Bleu in Lawrenceville, his first step away from Pittsburgh’s city center, food is the vanguard, with stepped-up service and a more formal atmosphere. At the same time, there’s no let-up of what might be the signature trademark of the chef and owner of Richard DeShantz Restaurant Group — fun.

DeShantz, as he did at Meat & Potatoes, Butcher and the Rye, täkō and Pork & Beans, designed the interior. The timeless, layered design blends warm and traditional French bistro elements — copper cookware hanging on the open kitchen walls is juxtaposed with soft, weathered brass. Blue and white are the dominant colors throughout the restaurant, but they’re nicely punctuated with zinc, pewter and gold. Wallpaper is a welcoming and cozy design element, and I love the blend of comfortable chairs and the long wooden picnic bench that rings the dining room. The soundscape fits the bill, too, a mix of jazz-era French, American and English tunes that feel on-point yet not too thematic.

The menu is full classic and approachable dishes such as steak frites, trout almondine and escargot. All-in-all, everything is rather nicely executed by chef de cuisine Ryan Hart and his team. 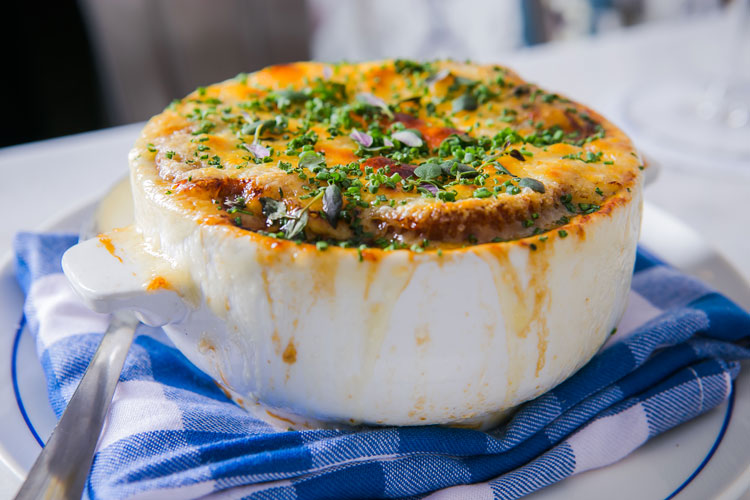 French onion soup is a culinary classic that kitchens usually find a way to bungle. At Poulet Bleu they come close to nailing it. It’s crafted with a smidge-too-sweet broth base of slow-rendered, velvety onions combined with long-cooked veal stock enhanced with oxtail and Cognac. It’s finished with a slice of baguette, topped with Comte and Emmental cheeses and then set under a salamander until perfectly browned.

The soup is rather decadent, which is a recurring theme at a restaurant that also could be called “Everything’s Better with Butter.” Not that I mind. I’ll take a bowl of velvety aligot potatoes that are nearly as much dairy as they are spud and a serving of mushrooms vol-au-vent, earthy fungus cooked with walnuts, chicken jus and Dijon mustard stuffed in flaky puff pastry, too. Still, it wouldn’t be a bad idea to add a dish such as salad Niçoise, a late-spring special popping fresh with tender seared tuna and luscious olive tapenade, to the regular rotation.

If you’re looking to go light, start with plump, tender mussels steamed in a vibrant white wine sauce. Be sure to find the chunks of fennel, the low-key hero of this dish, which add a sweet anise flavor. 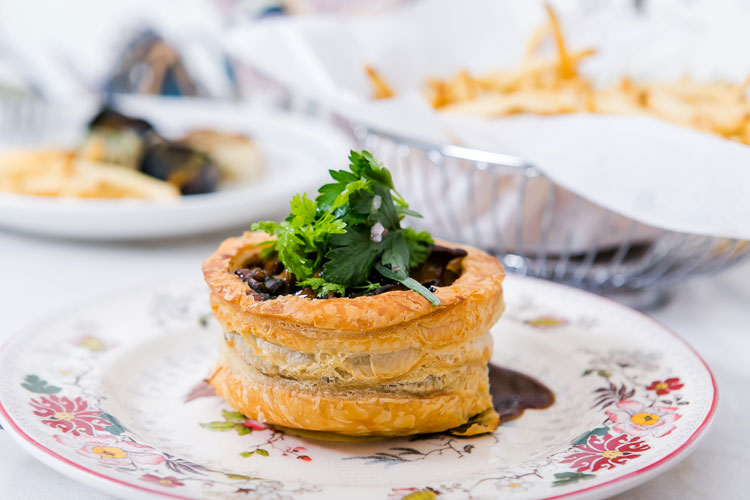 Plating is straightforward and uncomplicated, letting the ingredients speak for themselves. There are a few fixes, particularly in the larger-format plates, that could make things a bit better. In the chicken dish, for example, I’d love to see the flavorful leg blanquette piled atop the more basic breast to give that dish a bit more balanced flavor; as it is now, they’re served, for no good reason, on separate plates. The same goes for steak frites — sous vide and seared steak, in my case a New York Strip, appears cheerless on its plate, with just a sliver of sauce to keep it company. Its BFF — incredible frites — meanwhile, shoestring solo in a basket; this keeps them crisp, but also robs us of the bottom ones flush from lapping the juices of the steak and sauce. The bifurcated plating of both of these dishes meant our server needed to pull over a sidecar table to accommodate everything. It sure is fun to feel like you’re eating extravagantly, but in this case, more thoughtful plating would have made a simple solution for easily fixable culinary and geometric problems. 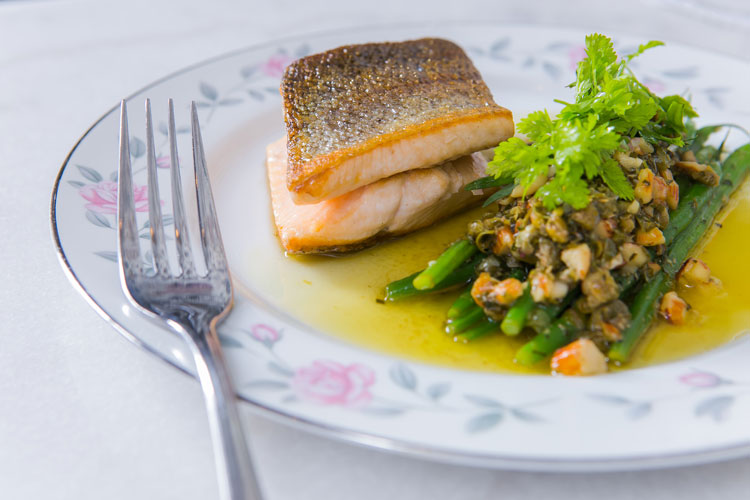 Poulet Bleu’s pastry chef James D. Wroblewski II is something of a wizard, spinning sugar into pixie dust and conjuring cakes from flour and yeast in the restaurant’s basement, preparing treats so tasty you’ll end up finishing them in spite of the fact you’re stuffed from dinner. The star of the show is chocolate soufflé, a lofty and indulgent tower encasing molten chocolate and accompanied by a variety of sauces and ice cream. There’s more, too, including pavlova with its light, crisp meringue and tart yuzu curd, and a textbook vanilla crème brûlée is served with berries.

The pulse of the staff on the floor is healthy and high-energy, with a lot of solid teamwork. There is a choreography to the service, and everyone seems to know what their intention is, yet at the same time they’re quick to jump in and help each other. Credit this in large part to co-owner Tolga Sevdik. Successful restaurant groups almost always have a person who quietly works the strings behind the scenes to make sure everything runs smoothly, and Sevdik is that person for the Richard DeShantz Restaurant Group. He’s developed a layered front-of-house organizational structure that works in all of the DeShantz establishments and shines exceptionally bright at Poulet Bleu.

It’s too bad that John Wabeck, the captain of Pittsburgh’s wine team, doesn’t spend as much time on the floor as he did during the first few months of his run as a consultant at Poulet Bleu as it’s a treat to share his extraordinary viticultural knowledge. Even if he’s not there, the well-trained staff can guide you through a wine list that hits the mark for high-end splurge yet also is full of tasty treats at an affordable price-point. Cocktails are classic, crisp and perfectly balanced. I’m a big fan of the De La Louisiane, a boozy blend of rye, Benedictine, sweet vermouth, bitters and absinthe. 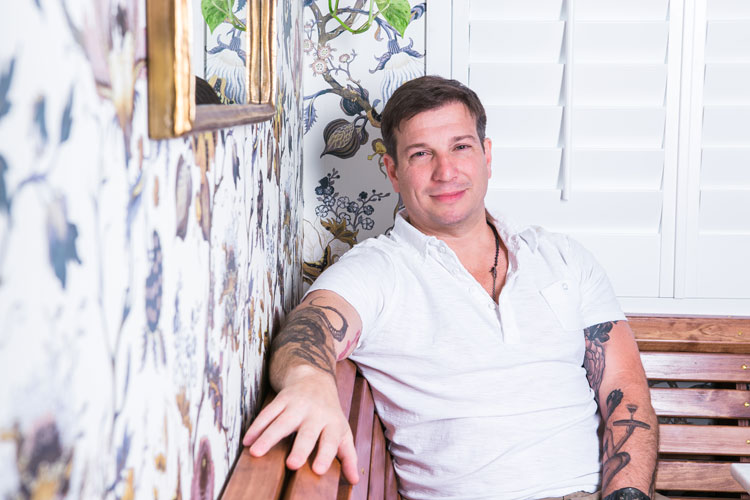 There have been other staffing changes, too — the departure of the former culinary director David Racicot and beverage director Cecil Usher the most important of them — yet Poulet Bleu, which opened in February, continues to roll full steam ahead.

Poulet Bleu represents a maturation for DeShantz. Here, he proves that he can open a top-tier restaurant, ranking among Pittsburgh’s best. But he’s also planning on opening as many as three more restaurants this year. Can he keep up the quality in Lawrenceville, not forget about Downtown and push forward with the new ones? That’s the next question.

This article appears in the August 2018 issue of Pittsburgh Magazine.
Categories: From the Magazine, Hot Reads, Restaurant Reviews