Restaurant Review: or, The Whale

The Downtown restaurant is a captivating, if costly, catch. 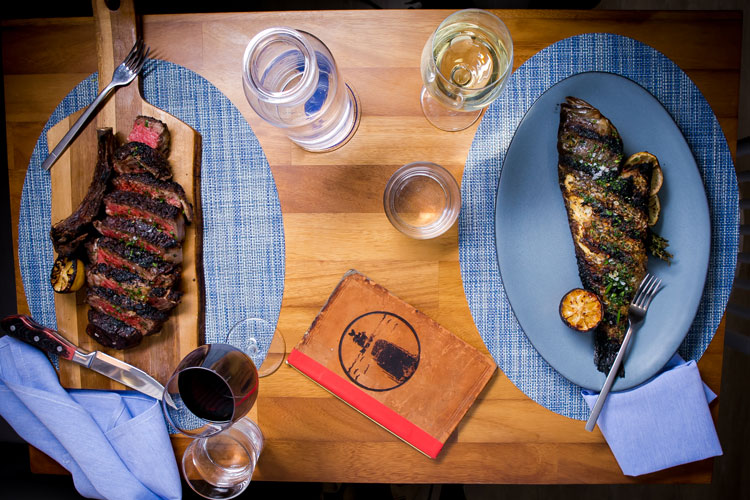 Here’s how you know that Downtown dining in Pittsburgh has hit a new milestone: there are steak dishes at or, The Whale, a seafood and chophouse restaurant in Distrikt Hotel, that break the century price mark and a seafood tower that nearly stretches to twice that.

Prices at Whale, overall, are significantly higher than other independently operated restaurants in Pittsburgh, in large part due to ownership’s serious commitment to sourcing its meat and seafood. That’s cool, but it makes it a hard sell for most of us to put Whale on frequent rotation.

However, that doesn’t mean that this exceptional-at-times restaurant isn’t worth recommending. If you can look past the gimmicky menu design (with unhelpful categories such as “Loomings” and “Nantucket” and then a sudden shift to the more on-the-button “Steaks”), you’re in for a treat.

There are very few culinary memories in the past year that linger as pleasurably as savoring Whale’s 35 ounce, bone-in, dry-aged ribeye — with a price of $125. The Jubilee Hilltop Ranch beef, cooked medium-rare as ordered and bursting with grass, funk and beefy umami, is better than most steakhouses in town. 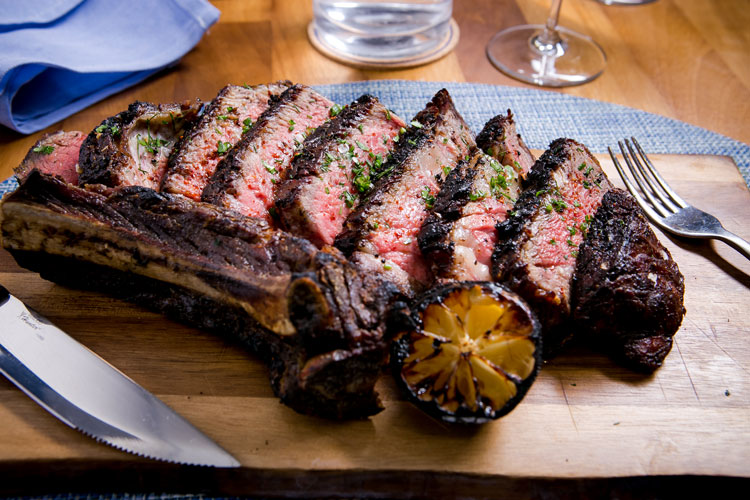 Wonderful to have that experience, but that also is a lot of dough to spend on a single item, even if you share it (as you should) with two or three pals and factor in the loss associated with dry-aging beef (which, in some part, explains why beef from the same source is less expensive at other Pittsburgh restaurants). Plus, if you want a side dish or a sauce, it’ll cost you extra.

The restaurant’s proprietor and executive chef is Dennis Marron, a longtime veteran of hotel-attached establishments. Prior to coming to Pittsburgh to open The Commoner at Hotel Monaco, he ran several Kimpton Hotels (the parent company of Hotel Monaco) restaurants in Washington, D.C., and northern Virginia.

Marron left The Commoner in mid-2015, planning to end his run in hotel dining. His goal: open a Jersey-shore style oyster and chowder bar called Merchant Oyster Co. in Lawrenceville.

Early in the Merchant project, and with some investment already lined up, he was approached by Scott Schroeder, co-owner of Distrikt Hotel, a boutique hotel in Manhattan. Schroeder wanted Marron to spearhead the restaurant at a planned Pittsburgh outpost of Distrikt. The two struck a deal — Schroeder would help fund Merchant, which also opened in 2017, and Marron would sign on as co-owner and executive chef of the hotel restaurant. 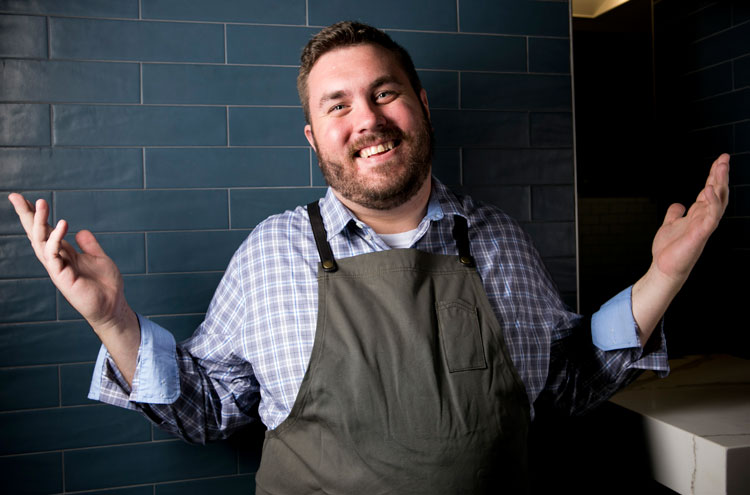 Marron oversees the big picture but mostly has left the Whale kitchen in control of chef de cuisine Brooks Hart, a graduate of the Culinary Institute of America and the former executive chef of the traveling pop-up restaurant series Dinner Lab. The restaurant has a daily brunch menu with items such as oatmeal and “Chef’s Breakfast” (basically, ham and eggs) that are meant to appeal to hotel guests; otherwise, Whale feels more like a destination restaurant than a hotel accoutrement.

The two-level restaurant is cozy, particularly by day. The wall-sized mural of Captain Ahab’s Pequod hunting Moby Dick (the restaurant is the alternate name of the novel) is an eye-catcher, and the rest of the space hits nautical notes without ever making you feel as if you’re in a seafaring-themed Epcot Center restaurant. The chairs are exceptionally comfortable, with a mix of primary colors that pull together and enhance the energy of the cool-toned wallpaper. I appreciate the choice in plateware, which feels very New England cottage cozy, something that a fashionable grandparent might have in their house.

Ownership needs to work on volume control at night; if you’re seated at the tables closest to the kitchen pass, you may as well text your friends instead of speaking with them because the speakers are angled directly at the tables. It’s a bit quieter in the other seats, but only in the sense that you won’t be searching your pockets for earplugs. 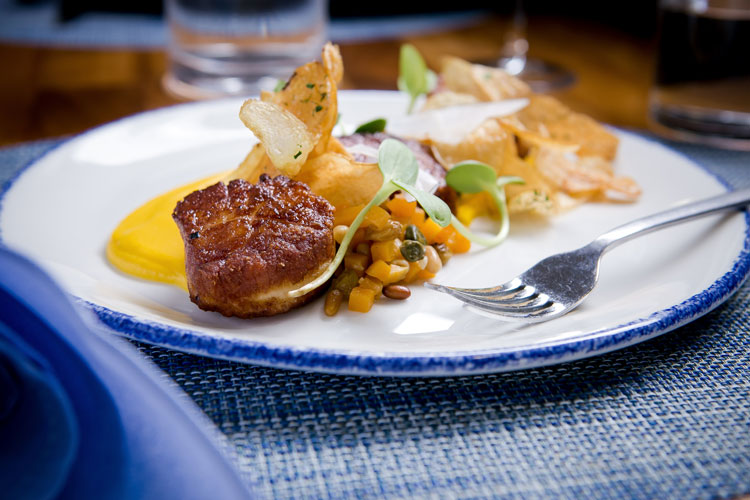 Whale’s primary dinner draw is its expansive seafood menu, which features more excellent choices than anyone else in town. Dayboat scallops are caramelized on the outside and fork-tender within, bolstered with butternut squash caponata — golden-hued and earthy sweet — as well as black radish with earthy funk, green and sunny sunflower shoots and crisp golden potato chips. I also loved the whole trout, which was juicy and with a subtle veneer of smoke flavor. It was served with parsnips (precisely the right vegetable to be eating on a cold night) prepared three ways — roasted, pureed and crispy chip, all of which, as Larry David might say, were pretty, pretty good.

Ordering fish is also a smart choice when dining during the day. Aside from a handful of light and tasty options — such as quinoa-oat granola packed with nuts and seeds — that make for a healthy morning meal, daytime doesn’t quite match the scope or execution of the dinner service. Still, I’m going to have a hard time staying away from Whale’s fish and chips — fresh chunks of cod are fried flaky and tender on the inside, surrounded by crispy and crunchy light batter on the outside. Tangy and creamy house-made tartar sauce provides a good foil for both the fish and the accompanying fries.

Otherwise, you might be stuck with dishes that feel as if the kitchen is slacking with meticulous recipe testing before adding items to the brunch menu. “The Best Chicken Sandwich You’ll Have Today” … wasn’t. The bread, thick Texas toast, was soggy, greasy and not adequately toasted. Then the sandwich fillings fell out every time I took a bite. It’s too bad the build wasn’t right (and a baguette would be a better option than sliced bread), because the components of the sandwich were on-point: butter-roasted Goodness Grows chicken breast is tender, braised chicken ragu adds an extra punch of chicken flavor, as does the crispy chicken skin; roasted tomatoes and arugula balance the meat. 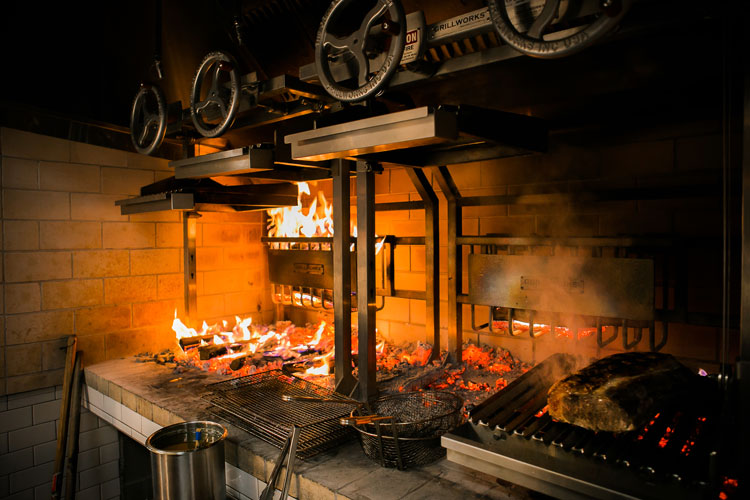 Sometimes, dishes are pretty good but also off-theme. Shakshuka, a holdover from operations manager Jessica Lewis’ Smallman Galley restaurant, Carota Cafe, is an odd brunch-menu departure. “Why are they taking us to the other side of the world?” a friend wondered. Even more surprising was a duck tongue special; crispy, spicy, sweet and fun to eat, the sweet-and-sour sauce was an unusual, unnecessary detour to Asia in a restaurant that firmly is rooted in the Atlantic Ocean. And, after munching four or five tiny tongues, the thrill had worn off. 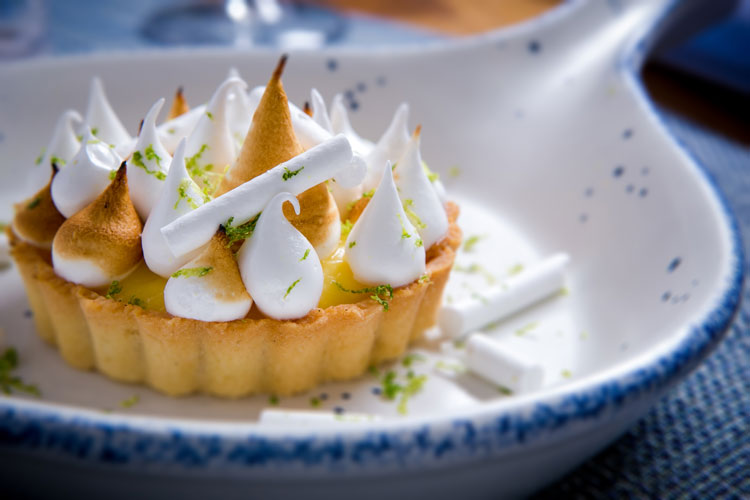 Pastry chef Adam Bates, a recent transplant who worked at Del Posto in New York, is the newest addition to the team. His desserts such as savory, salty and sweet peanut tart and the remarkably comforting bienenstich (bee sting cake, local honey caramel, almond, pollen, chamomile creme) rank in Pittsburgh’s top tier, but, carried with modernist hallmarks such as architectural plating, agar-thickened sauces and dollops of foam, can feel as if they arrived from a different restaurant.

Bar Manager Michael R. Anderson, who seemed more focused on flash over function with his previous menus at other Downtown restaurants, shines at Whale, creating ornate, balanced cocktails that sometimes come with a side of theater. “Smoke Show” is a $30 riff on a Waldorf that’ll put your table center stage as all eyes in the restaurant watch cherry wood infuse with booze under a glass dome. It’s dramatic, it’s quite fun to participate in the experience and it’s about twice the price it needs to be. The rest of the cocktail menu is more approachable. Atlantic Specific (Sauza Blue Reposado tequila, Amontillado sherry, Contratto Aperitivo, Averell Damson gin liqueur, orange bitters, spiced chocolate bitters.) is a good place to start. It’s balanced, slightly savory and peppery, and so so beautiful with a dry finish.

Whale’s sommelier, Eric Moorer, was spending several months studying in France during my review period but has been a consistent source of knowledge and hospitality in the entire time I’ve ordered from him. Fueled by this new experience, I’m sure he’s just going to deepen his relevance as one of the city’s top wine people. 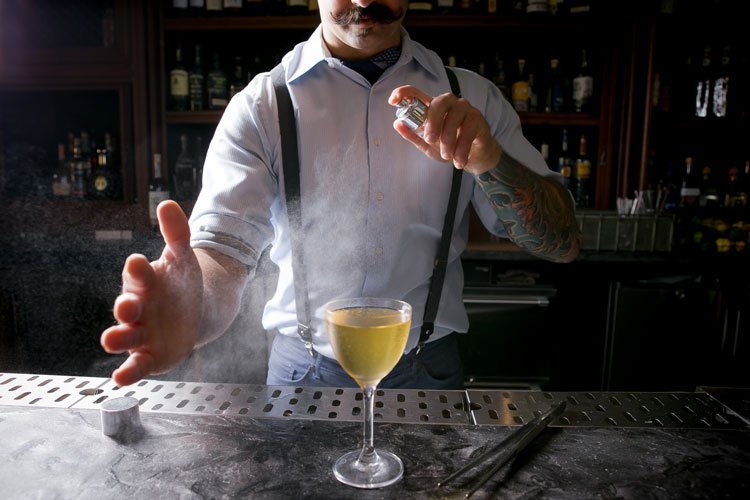 The rest of the vibrant staff is just as engaging, if a little on the chummy side for a restaurant at this price-point.

Which brings me back to that steak and back to prices. The issue is this: nickel and diming customers with a $3 upcharge for steak sauce and $9 for a side such as smoked smashed potatoes is inhospitable, even if that’s how it’s done at a traditional American steakhouse. But Whale isn’t one of those and most people don’t have unlimited expense accounts. If I’m spending that much money on a ribeye, which makes for a nice treat, I’d like to see the carving board the steak is served on brimming with sides, sauces and bread. All-in-all, or, The Whale gets hospitality right and is delivering one of the best new restaurant experiences in Pittsburgh. Now, it’s up to ownership to find a way to ensure that the smaller fish angling for a treat can swim with the high rollers.

This article appears in the February 2018 issue of Pittsburgh Magazine.
Categories: From the Magazine, Hot Reads, Restaurant Reviews