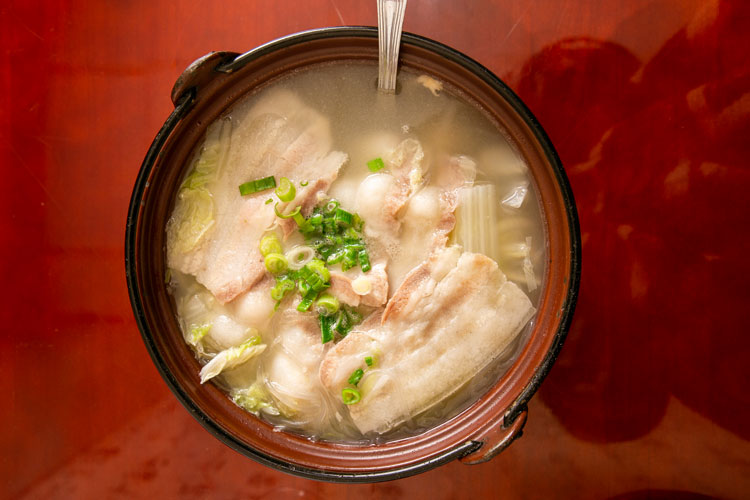 Northeastern Kitchen, a subterranean restaurant in Squirrel Hill, is a little tricky to find. Look for a small sign on Forbes Avenue between the Dollar Bank and Ten Thousand Villages, descend the staircase, wind through a hallway past a nail salon and you’ll make your way to the minimalist, windowless dining room.

Don’t let the unremarkable setting deter you. Northeastern Kitchen’s owners, Zheng Yuan and Chong Xue Liu, brought something entirely new to Pittsburgh when they opened in June — a restaurant serving the cuisine of China’s northeasternmost province, Heilongjiang, which shares borders with North Korea and Siberia.

Sichuan fare, its signature dishes laced with a numbing, head-tingling blend of Sichuan peppercorns, hot peppers and flavorful oil, is catching up with the popularity of Chinese-American dishes such as wonton soup and egg rolls. It’s become the gatekeeper that’s leading Pittsburghers to branch out into other regional cuisines of a country with more than 4,000 years of culinary history. This includes Xi’an food, with its chewy, hand-pulled noodles and flaky lamb pancakes, and the pan-Chinese-exile-meets-indigenous-population assemblage of Taiwan — famous for soup dumplings, three-cup chicken and beef noodle soup. Now you can — and you should — add another regional Chinese cuisine to your repertoire by becoming a regular diner at Northeastern Kitchen.

The food of Heilongjiang is rooted in a culinary tradition called Dongbei, which draws from the unique geographic influences of its location (short, hot, humid summers and long, brutal winters) and the broader pan-Chinese culinary canon, as well as the foodways of its neighbors, especially North Korea. 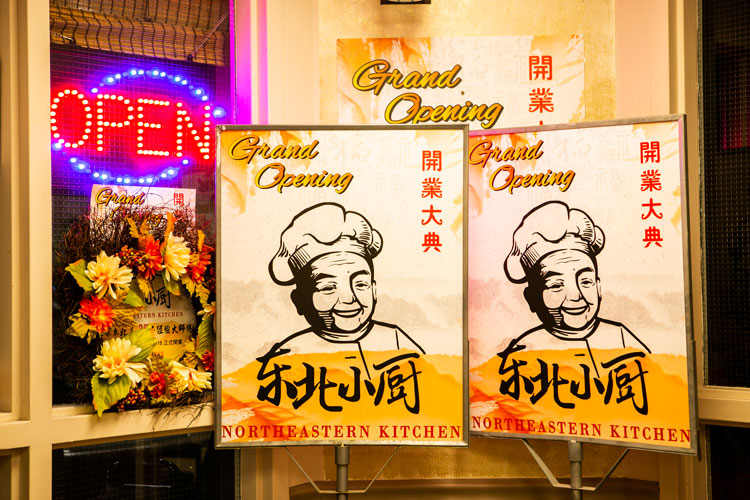 This means you’ll find a menu featuring a surprising number of comforting, warming dishes, plus a good amount of cabbage, both fresh and fermented. Tofu hot pot, for example, is served bubbling with kelp, soft tofu and cabbage. It’s a mild dish that, especially with the boost of zinc and iodine from the kelp, could serve as sick-day food. It’s simple and soothing, and, while this might sound a little contradictory, has a mildness that magnifies as it sits. On the flip side, the harshness of the region’s climate demands that nothing is wasted — offal too plays a starring role in bold, intensely flavored dishes such as blood sausage iron-pot stew, which is made with coagulated blood, cabbage and pork belly. The blood melts as it heats, infusing the stew as if it’s a savory, metallic tea.

Yuan and Liu hired a longtime friend, You Shan Pei, as the head chef of Northeastern Kitchen. Pei moved to Pittsburgh from Flushing, N.Y., where he worked for nearly two decades as a chef in both Chinese and Korean restaurants. He was born in Qiqihar, China, which is located on a fertile floodplain in western Heilongjiang and has a population of about 1 million. Originally a settlement for nomads, it also served as a military garrison and railway terminus and now is known as a hub for industry and food processing — corn, a crop uncommon in most Chinese cooking, is a significant part of the regional economy. 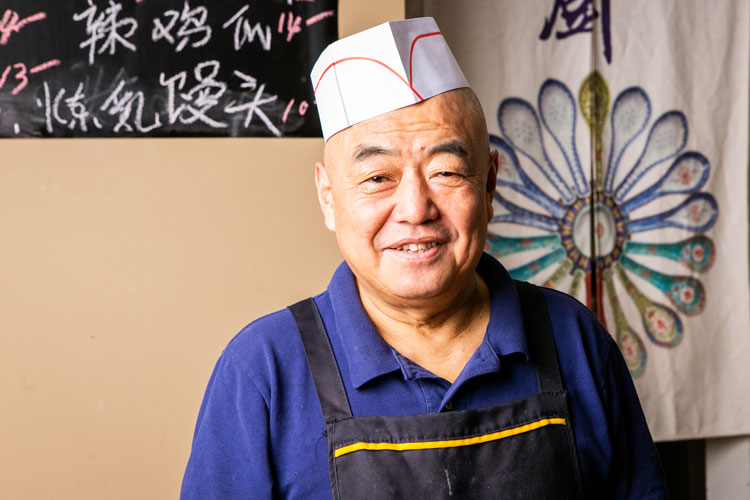 Navigating Dongbei cuisine was pretty new to me when I started visiting Northeastern Kitchen, and it took ordering a meal with significantly more fermented cabbage than I’d planned on eating to begin to figure things out. Due to language barriers, it can be a bit tricky to plan a meal, but the staff at the restaurant is doing their best to help steer English-speaking customers in the right direction — patience, and the occasional game of charades, will help you meet them in doing so.

After my super-sauerkraut visit, I established a pretty solid rhythm to ordering a meal, which is better if you go with a group of four or more. That’s not to say you can’t have a lovely time if you’re by yourself or with another person; in that case, order one of the iron pot stews, and a vegetable dish, warm yourself and call it a day. If you’re with a group, here’s what I suggest:

Start your meal with thick-skinned and filling dumplings. At Northeastern Kitchen, they’re handmade and stuffed with Chinese cabbage and pork, sauerkraut or beef. The sauerkraut stuffing is a regional classic that’s worth trying, particularly when paired with the peppy garlic and black vinegar dipping sauce, and I’m also a fan of the juicy cabbage and pork version. 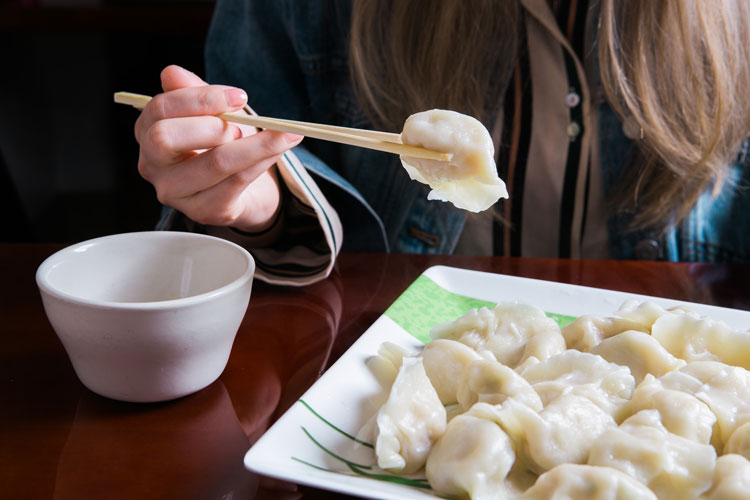 There’s a handwritten chalkboard full of seasonal specials near the kitchen. Of those dishes, the pork hot pot, which arrived at the table bubbling and raging, was my favorite. Airy, fluffy pork meatballs, planks of cabbage, and dank, almost medicinal mushrooms floated in what the kids these days call bone broth; a little floral, a little herbal and spiked with star anise, it’s a million times better than something you’ll find at the health-food store. I’m rather obsessed with that dish and rather smitten with another one on the chalkboard menu — roast pork with hoisin sauce, tofu skins, scallions and cilantro. I love the use of tofu skins to wrap the rest of the items; they are a healthier — and just as satisfying — alternative to a deep-fried or doughy casing. “It’s like Keto mu-shu,” said a friend as she dove in for a fifth serving.

From there, you’ll want to get a couple of wok-cooked, vegetable-based dishes. One dish I get nearly every visit is celery with shredded potato. Here, the often-unsung plant is cooked with crunchy shards of potato, garlic and scallions and rounded out with a splash of black vinegar. Back to those tofu skins, when they’re julienned and cooked with chives, it’s easy, tasty eating — I love that the greens are used as a primary component rather than a garnish. The toothsome texture of the tofu skins makes for a profoundly satisfying vegetarian dish that gets better as it sits and the wok-hei flavor develops. I’d recommend another regional classic, stir-fried eggplant, potato and peppers, if you’re looking for something heartier. 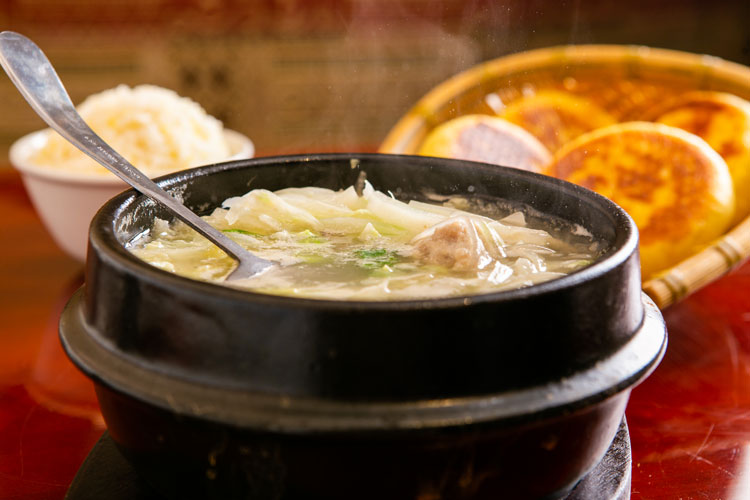 Cap your order with an iron pot stew or hot pot; in addition to aforementioned hot pots, I’m a big fan of Four White iron pot with its comforting, mellow mix of Napa, uncured pork belly, tofu and cellophane noodles. Chicken with mushroom stew, with bone-in chicken parts, forest mushrooms and cellophane noodles, is another perfect pick-me-up worth getting. It’s served with corn buns, which are a bit thick and doughy on their own but provide a nice sponge for the soup.

I’m thrilled that Northeastern Kitchen is part of the growing community of regional Chinese restaurants in Squirrel Hill. Pei’s homestyle cuisine is one that, particularly in the colder months, I find myself seeking often. I feel as if I’m just starting to dig below the surface of what’s coming from the kitchen and am looking forward to getting deeper into it over the forthcoming months. I suggest you do, too.

This article appears in the March 2019 issue of Pittsburgh Magazine.
Categories: From the Magazine, Hot Reads, Restaurant Reviews