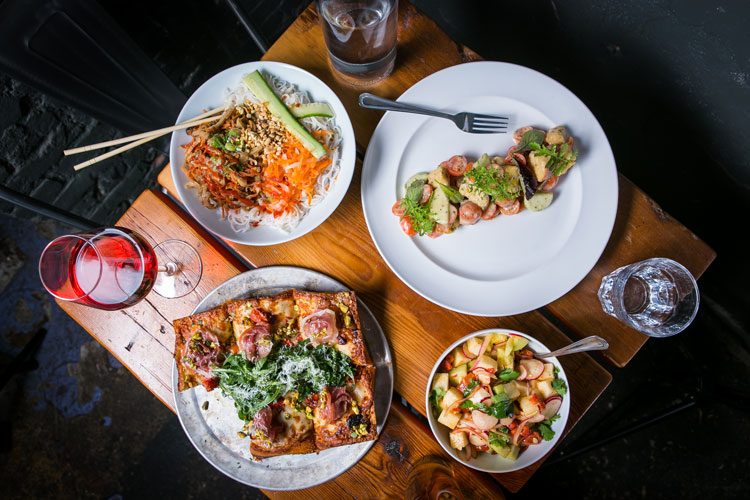 In June, four new chefs cycled in as the second cohort of restaurant operators at Smallman Galley, the 2-year-old restaurant incubator in the Strip District. 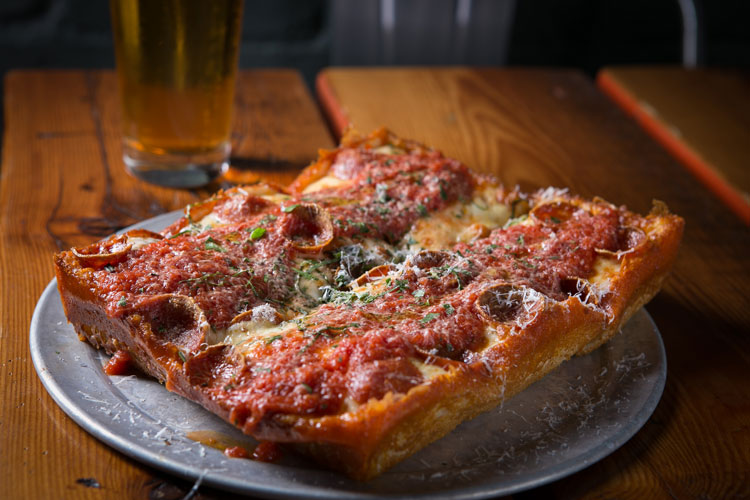 Pete Tolman runs Iron Born pizza, the strongest by far of the four restaurants. Tolman and his team make Detroit-style pizza, an addictive style that begins with an airy, slow-fermented base ringed with a crust of baked cheese. Tolman is introducing this style of pizza to Pittsburgh (though it’s been popular in Detroit since the 1940s), and it is something you should make a priority to try if you haven’t already done so. Tolman’s kitchen features seasonal pizza builds as well as a handful of standards. My favorite preparation is called “Red Pie” (tomato sauce pepperoni, garlic oil, fines herbs and 2-year-old Solo di Bruna Parmesan) but everything I’ve had has been spectacular. Iron Born isn’t simply the best thing at Smallman Galley — it’s one of the most enjoyable things to eat in Pittsburgh right now.

The other three chef/owners are Jesse Barlass (Colonia), Hoa Le (Banhmilicious) and Ryan Peters (brunoise). All of those operations are a mixed bag of strengths and weaknesses. 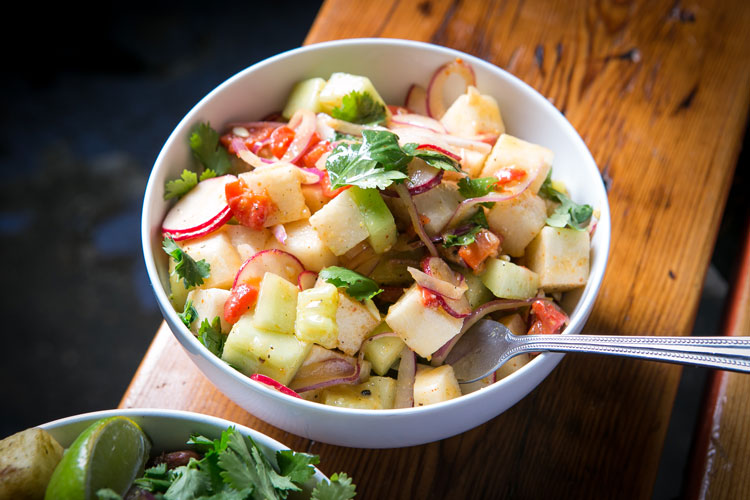 Barlass previously was sous chef at Carota Cafe; now, he’s running a pan-Latin restaurant, Colonia, in the same space. When Barless hits the mark, Colonia is a satisfying exploration of flavor, texture and culture. Such was the case with a vegetarian casamiento “wedding” bowl, a Salvadoran-influenced rice and bean dish chock full of vegetables, and again with a crunchy and refreshing pepino and jicama salad. There often are misses, however, such as a flabby, undercooked and underseasoned chicken thigh dish.

Indeed, Barlass’ biggest challenge is his inconsistency, which, in part, is a consequence of his attempt to explore cuisines from too many regions he doesn’t have a profound connection to, as well as having a kitchen staff that doesn’t always dependably execute the preparation of his dishes. Barlass is passionate and curious, and has all of the right tools and training to succeed as a chef, but he isn’t yet presenting a cohesive vision for Colonia. I’d love to see him focus in on a more specific geography for the remainder of his time at Smallman Galley. 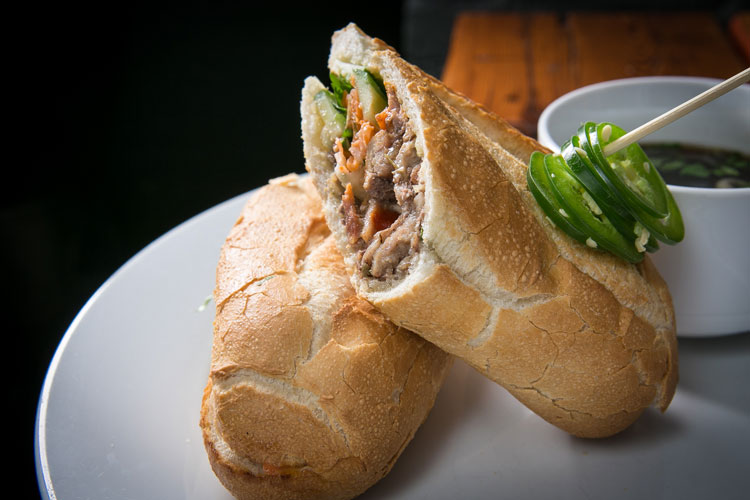 Vietnam-born Hoa Le doesn’t have a problem connecting to her roots at Banhmilicious. Her lack of restaurant experience (she worked as a waitress at family restaurants in her youth, but the trained food microbiologist’s professional work is on the corporate end of the food system) is apparent in her preparations, which miss the nuanced touches of the other chefs. A bánh mì, for example, begins with an excellent baguette baked by BreadWorks but then quickly goes downhill; there is hardly any zestiness from pickled carrots, no bite from daikon and such a small smidge of pate that the sandwich is missing necessary funkiness. “It’s empty,” a friend said, referring not so much to the sandwich fillings (which are, for the price, on the scant side) but rather to a perceived soullessness of the experience. We found a hack, however, when we dipped the sandwich into the accompanying bone broth. The broth — flavorful, if too salty, on one visit; greasy and significantly overspiced on another — provided an excellent foil for the flat-feeling sandwich.

Craft a Viet-French dip, and it’s all a rather pleasant experience, but I’d rather see them get the sandwich right on its own. Le also prepares a small menu of rolls, noodles and other small bites that are fine but not memorable. I’d like to see her tap into something more soulful; everything here feels like it’s designed to be franchised rather than something that’s cooked from the heart. 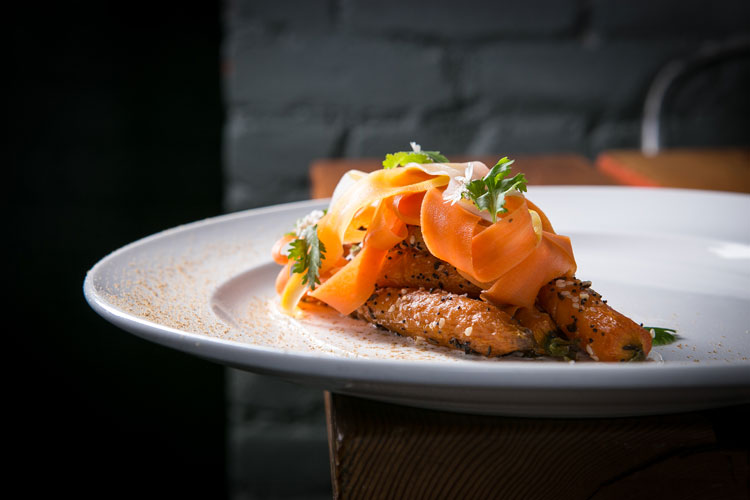 Peters’ brunoise hits the highest highs of the three but, at times, drops the ball the hardest. The brunoise hamburger — a juicy treat influenced by Peters’ time as a chef at Salt of the Earth — is one of the very best in Pittsburgh. A peak-summer panzanella salad, like all of his other dishes, came plated like artwork; this one also popped the palate with sweet tomatoes, Veget8 vinaigrette and a deft assortment of herbs. Same goes for roasted carrots, sweet, soft and coated in poppy, sesame, coriander, caraway and sunflower seeds. But my friends and I left about 90 percent of our risotto uneaten; it was very salty, somewhat soupy and with a lemon flavor that becomes too pronounced because of the salinity. It also could use something else, mushrooms, perhaps, to make it feel like a more substantial dish.

Peters is a young chef with a bright future. Moving forward, he’d be better served working as a chef de cuisine or sous chef at one of Pittsburgh’s high-end restaurants than striking out on his own. At 24, he should seek mentorship by Pittsburgh’s top chefs rather than racing too fast to become one. 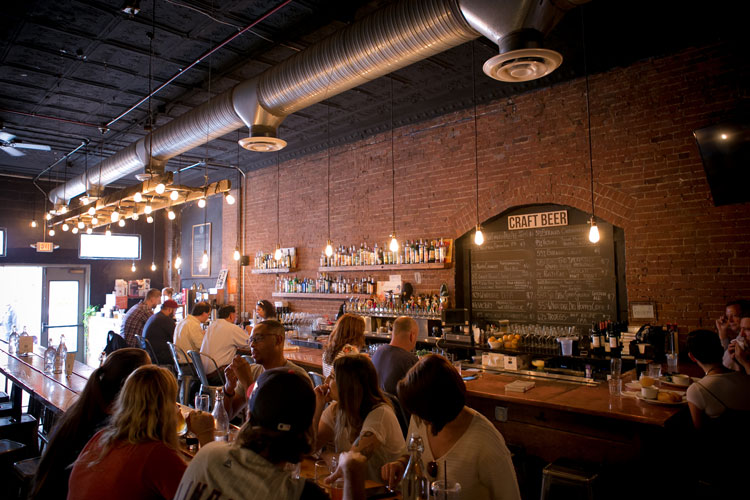 Props to Galley Group beverage director Tim Garso and his top-flight bar staff. They are having a lot of fun with their themed cocktail menus — the summer list, printed on VHS containers, was an homage to the 1993 family baseball film “The Sandlot.” Sound gimmicky? Sure, except that everything from the smoky and fruity “Wendy Peppercorn” (the most delicious fuschia cocktail I’ve ever had) to the nutty yet bracing “This Magic Moment” was perfectly executed. The beer list, which leans local, also is outstanding.

This group of Galley chefs is slated to remain in their incubator kitchens until May 2018. Between now and then, I plan on eating a lot of Iron Born pizza and seeing how the other chefs hone their talents.

How do you approach designing a bar program for a space that has four restaurants?
The fun thing with the bar program is that it evolves in the same cycle — and then resets — every year. When the chefs change over, I dial back the things we do because I expect there are a lot of new customers coming in with that change of chefs. Then, as the customers get used to our style of service and the food hall concept, we start to push the boundaries a bit more. The wine stays broad and food-friendly because we have four chefs who change things frequently; it would be nearly impossible to design a wine program to line up with all four styles of cooking.

Is there a challenge in developing an all-day/night program?
That’s one of the fun challenges. A lot of the bar staff have worked at various other cocktail-focused bars, but those serve only at night. We pride ourselves on being a high-volume, technically driven program. But, since we’re open all day, we’re prepping while we’re waiting on guests and working with [the restaurant] kitchens. We’ve all adapted to that. Matt [Zelinsky], Ariel [Scalise] and Hannah [Morris] came from Tender, and our cocktail program shares a similar ethos with theirs —  except they had the luxury of being only open at night. So, you adapt to that.

Your bar program is a lot of fun. What’s the idea behind that?
Doing these themes menus happened almost accidentally. Will Groves designed the original bar program and he named the drinks after ‘90s hip hop songs. Then we decided to do a Pittsburgh Pirate themed menu and it went from there. The packaging has evolved — last fall, all the drinks were named after Tony Hawk video game soundtracks and one of the bartenders, Heather [Kubas], designed a zine-style mixtape packaging. To close out the first class of chefs, we took some of the most popular drinks and remixed them where some element was changed in a major way — that was on a vinyl record jacket that Commonwealth Press designed. It’s 100 percent the credit to the staff that — it would be easy to put out a VHS-case menu and you wouldn’t feel the passion behind it — our personalities are able to come through without it feeling like a gimmick or that it’s forced.

This article appears in the November 2017 issue of Pittsburgh Magazine.
Categories: From the Magazine, Hot Reads, Restaurant Reviews