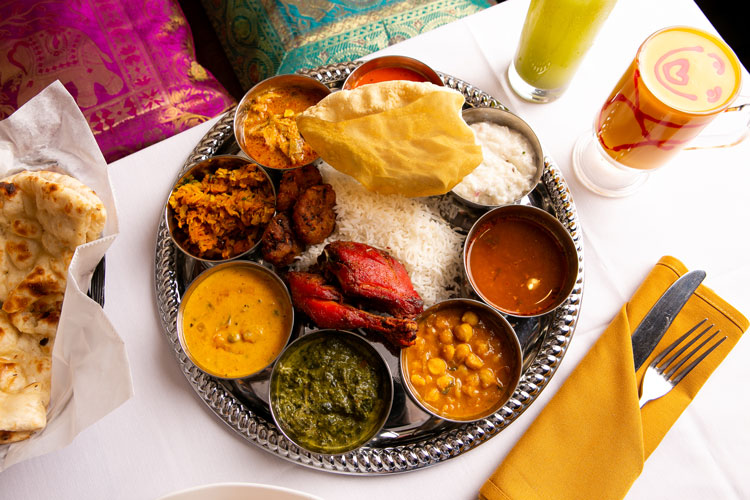 Brothers Suresh and Prasanna Kumar know how to run a restaurant. They, along with their cousin, Arjun Yar, have had seven of them in the region, beginning with Saffron in Moon in 2007 and most recently Curry Leaf Indian Bistro Downtown, which they had to close in 2014 due to Prasanna experiencing medical troubles. Rested, recovered and with a new business partner, Harjas Sandhu, the group was back at it last year, opening Masala House in December.

With this restaurant, they’re aiming to push themselves, and Indian cuisine in Pittsburgh, a few steps forward. Overall, they’re doing a very good job of it. The menu at Masala House is more compelling than I’ve found at most Indian restaurants in the region and nearly all the dishes are executed with a consistent, nuanced attention-to-detail that I dig. Chicken 65, for example, all too often appears limp, lifeless and with too much sweetness. At Masala House, the dish, which originated in the southeastern city of Chennai, is one of the restaurant’s most alluring appetizers. Boneless thigh meat is marinated in yogurt, coated with spices, chilies and mustard seeds, and lightly fried to give it a wisp of crispness. It’s a craveable dish with vivid red color and bright flavor and has just enough heat to nudge the appetite toward a big meal. 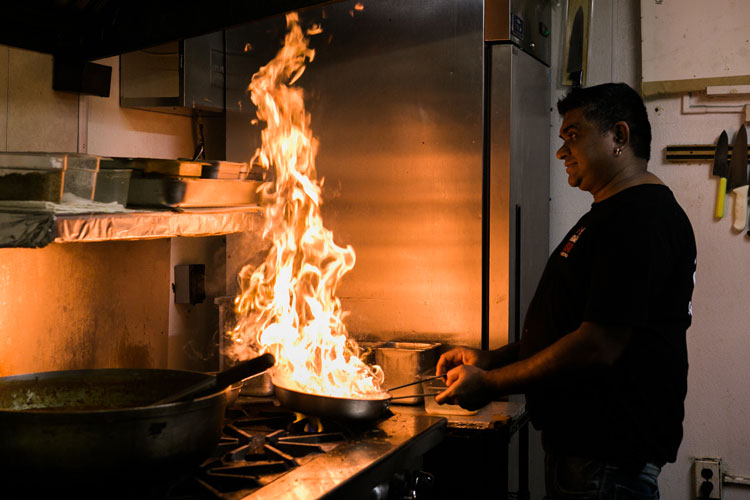 Prasanna is the head chef. A native of Bangalore, he started cooking in the United States 23 years ago. His goal at Masala House, he says, is to bring the feeling of an Indian home to a Pittsburgh restaurant. Although the dinner menu includes some of the greatest hits of British-influenced Indian cuisine, such as the mash-up Anglo-Indian favorite chicken tikka masala (nicely executed sauce, dry chicken breast) and the Mughlai-to-curry-house korma (comforting, sophisticated), Prasanna looks primarily to the regional cuisines of southern India to build his scratch-cooked offerings.

To that end, he has specialty ingredients, such as fresh gongura leaf, shipped in from New York. The herb, which is similar to red sorrel, tastes of fresh-cut grass topped with a sour, bright finish; it’s an essential component in Telugu cuisine. Try it at Masala House in a signature dish from the state of Andhra Pradesh — gongura goat curry. Dank and dense in appearance but aromatic, bright and tangy in flavor, it’s a delicious introduction to the cuisine of the region. It also will, if you’re not already one, make a goat-eater out of you. Prasanna slow-simmers the ruminant for several hours in broth and spices prior to adding it to the dish. For a more mild version of goat, have it in a biryani. The rice dish, of Muslim origin and shared throughout the Indian subcontinent, allows the goat’s tenderness to shine. 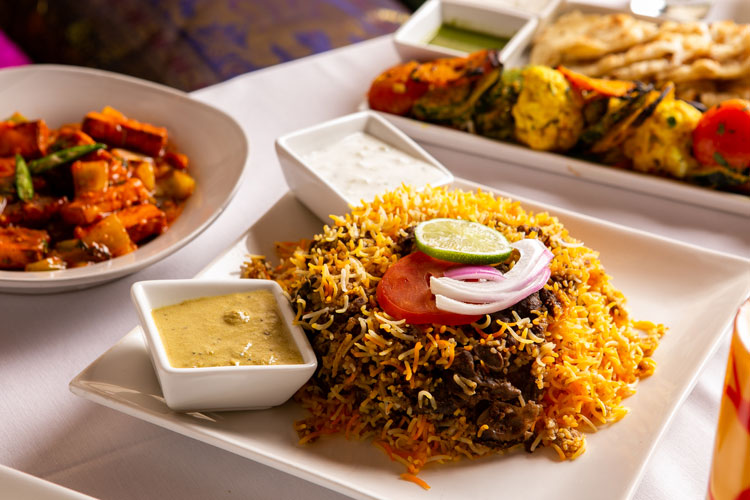 After one meal a friend said, “I would get everything with goat and lamb. They really know how to cook them here.” Indeed, Prasanna’s lamb curry was a group favorite at one meal, with tender lamb enhanced by the warmness of spices such as cinnamon and clove, as well as a bit of heat on the back end.

Don’t overlook the vegetarian dishes, however. Gutti vankaya, small, lacy eggplants stuffed with a peanut spice blend, is a slow cooked dish in a sesame-tamarind-based sauce. It’s a nice intermezzo, as the nuttiness of the sauce calms the heat of some of the other dishes. “Daal of the day” is a reliable, easy-eating homestyle that features lentils in a variety of preparations. 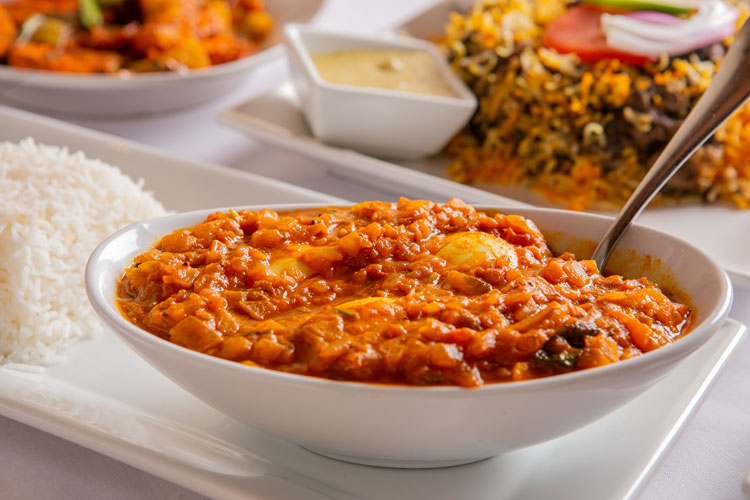 Masala House is located in an easy-to-miss space on Baum Boulevard that once housed one of Pittsburgh’s most beloved restaurants — Toni Pais, now of Cafe Zinho, ran Baum Vivant there from 1992 to 2006. Later, Toast! Kitchen and Wine Bar served as an under-the-radar solid spot from 2009 to 2015, and, most recently, Chaz and Odette struggled to gain traction and closed in 2017 following a short run. Here’s something I’ve always found a bit odd: there somehow exists in the zeitgeist the idea that parking around here is impossibly difficult, which couldn’t be further from the truth. Aside from 4 p.m. to 6 p.m. (when you’ll get towed) there is ample parking on both sides of Baum.

The bar area — which during the Toast! era was one of my favorite spots for a quiet drink — is home to a new favorite beverage, mint masala soda. Club soda is mixed with mint, sugar, lemon juice and cumin to create a sweet, salty, savory, ethereal combination that is a lovely accompaniment to the cuisine, as well as a refreshing sipper overall. Salt lassi, a sour and salty yogurt drink, is a bit specific on its own but serves as a flavorful cooling agent with many of the hotter dishes; mango lassi is a friendly alternative for people who are more interested in a sweeter drink. Otherwise, the bar space at the BYOB establishment is a bit underutilized as a staging area and storage space; it’s nice to feel like you’re in someone’s home, but I also don’t want to peer into your open closet. The design of the restaurant otherwise is low-key and comfortable. 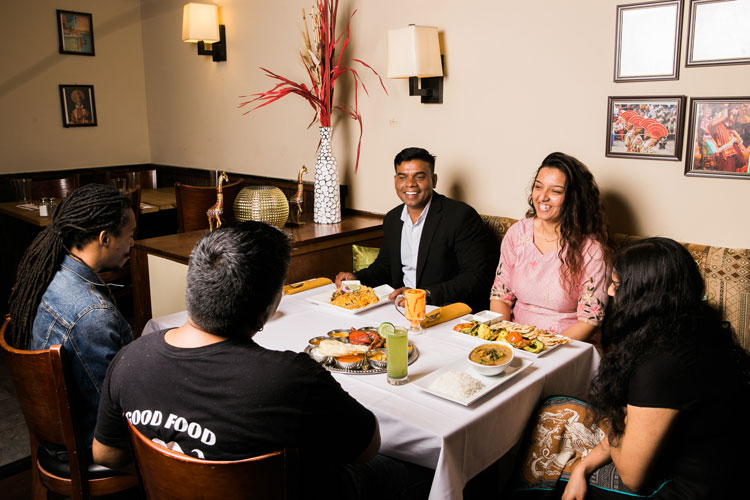 My favorite design element is something that’s not there: there is no buffet line at Masala House. The omnipresent all-you-can-eat lunch at Indian restaurants likely is an extension of a communal meal called langar that has been part of the Sikh community for centuries. What once was designed as an egalitarian, vegetarian meal meant to nourish people no matter their class or caste has, at least in most parts of the United States, devolved into a low-quality smorgasbord.Masala House hews closer to tradition (though it's not vegetarian), forgoing the steam trays for a  just-off-the-fire, all-you-can-eat daytime meal with a menu that changes daily.

On my earlier visits, dishes came two or three at a time from the restaurant’s kitchen, but they’ve since streamlined the flow a bit so that every order starts with thali-style service in which all of the dishes are assembled in small tins and served on a large nickel tray. It’s a lovely, geometrically pleasing presentation that is bountiful yet not overwhelming in scale. I appreciate the signal of welcoming hospitality, and the waitstaff is attentive in refilling whichever dishes are favorites. On one lunch visit, that meant I could have all the chana puri, beans poriyal, chicken Chettinad, fried okra, Mysore Bonda, chicken tikka masala and vegetable korma, as well as rice and house-made naan, that I could handle. Even though the tepid and slightly gummy okra felt like it has sat around a little too long, at $9.99 for a weekday meal and $13.99 on the weekends, it easily ranks among the best daytime deals in town. 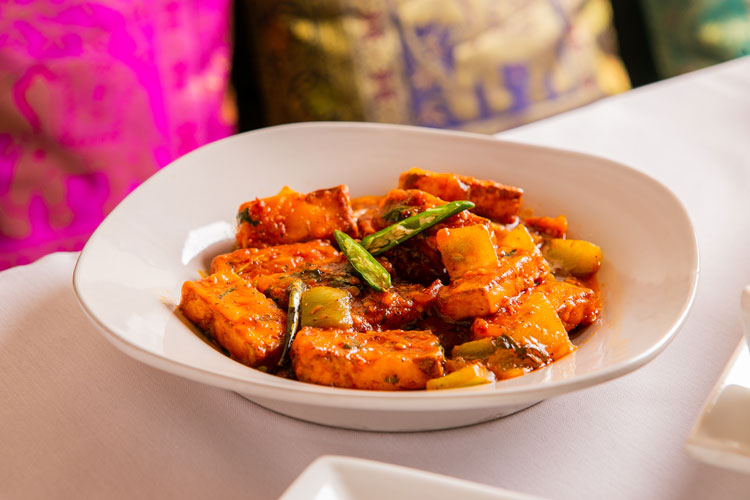 All in all, Masala House already is a draw, and some dishes are downright excellent. I’m glad Prasanna is embracing his culinary roots; with his skill and willingness to look deeper into regional Indian cuisine, I have a feeling that more delicious bites are soon to follow.

This article appears in the July 2019 issue of Pittsburgh Magazine.
Categories: From the Magazine, Hot Reads, Restaurant Reviews