The family-run North Side restaurant is a neighborhood gem with the potential to draw larger crowds. 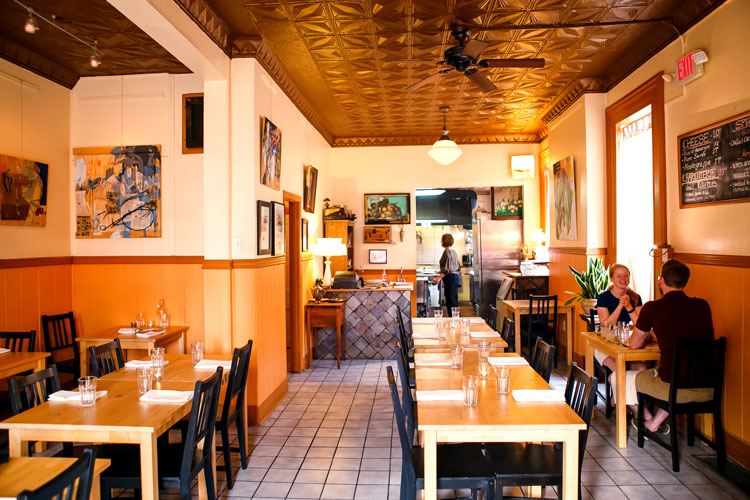 Lola Bistro on the North Side reminds me of the neighborhood restaurants I used to frequent when I lived in New York at the turn of the millennium. Quiet, comfortable places with a reliable menu on which you can find a few thrilling dishes as well as a couple of “friend, I’ve been here, we don’t want to order that” ones. The sort of establishment where, if you’ve eaten there a couple of times, the owners — in this case, Michael and Yelena Barnhouse — will know your name and your favorite dish.

I’m so happy to have a place like this in Pittsburgh and more than a little bummed it took me until earlier this year to visit the restaurant, which opened in 2012. It’s not to say there aren’t other lovely neighborhood restaurants run by owners who care beyond the ordinary, quietly and reliably serving good meals that begin with food that’s not generic or freezer-to-fryer. What sets Lola Bistro apart, and why I think it’s worth a review six years into its run, is that with a few tweaks it could become a draw as a destination restaurant without losing any of the character that makes it special. 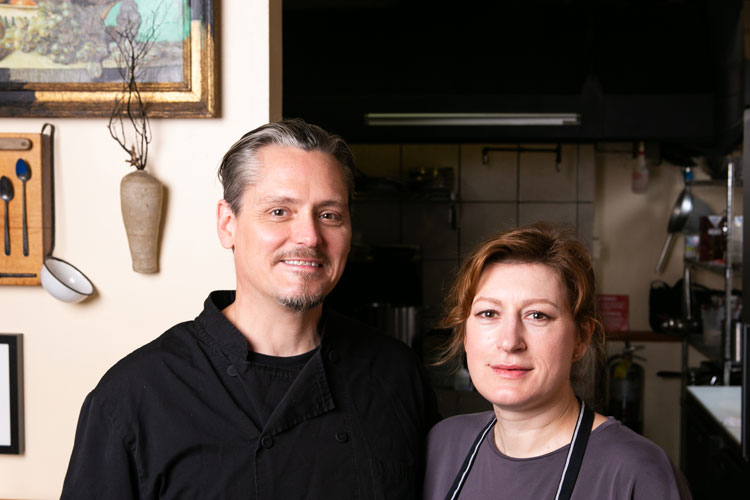 Michael grew up in eastern Ohio, and after earning a bachelor’s degree in fine art from Ohio University moved to Seattle to pursue a career in the arts. He landed in restaurants though, something that eventually drew him to New York City, where he attended the Natural Gourmet Institute cookery school (which also counts Whitfield pastry chef Casey Renee among its alumni). After a few years of working in catering kitchens and restaurants, he moved back to Seattle, which is where he met Yelena in 2006; both worked in the restaurant industry prior to moving to Pittsburgh in 2008 so that they could escape the rapid rent hike in Seattle and so that Michael could live closer to his aging mother.

The pair spent about $14,000 to open Lola Bistro in what Michael says was a wreck of a building, polishing the floor and refurbishing the tin roof. Michael’s background as an artist came in handy in more ways than just having a keen eye to spiff up the once-dilapidated interior and turn it into a charming, relaxing room  — look closely at the engaging agitprop-influenced paintings on the walls and you’ll see his signature on the bottom.

Lola is one of the few restaurants in town where a husband-wife team run the place without any other full-time employees (though this will change with the addition of a sous chef when they open a new space, the beer-and-sandwich-focused Leo, down the block later this year). The couple share kitchen duties during the day, which is when they do most of the heavy preparation for the service. 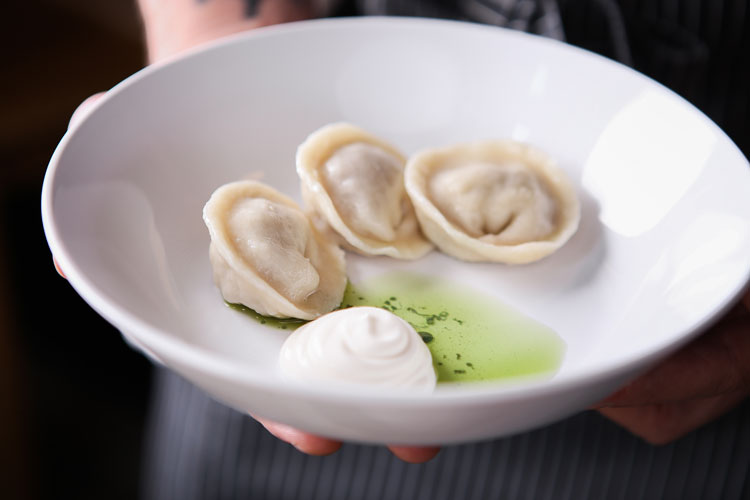 I’m a big fan of Yelena’s culinary contributions. Pelmeni, the dumpling endemic to her native Siberia, is the restaurant’s must-get dish. I’ve ordered them on every visit to Lola Bistro and will continue to do so. Sturdy-yet-supple ear-shaped shells are filled with a juicy blend of lamb and beef, served in a bowl topped with a dollop of dill-vinegar-infused sour cream and a lacing of verdant green ramp oil. Also fabulous is her Russian honey cake, a classic staple with more than 200 years of tradition behind it. It requires a laborious preparation resulting in dessert that tastes like the lovechild of a graham cracker and fluffy cloud, with layer upon layer of spiced, honey-sweetened cake separated with airy, sweet cream. It’s especially satisfying with a drop of the bracingly bitter black currant coulis served as an accompaniment.

By night, Yelena runs the front-of-house with brisk efficiency. She’s not what anyone would mistake as ebullient, yet her no-nonsense hospitality is a refreshing counterpoint to the overly effusive, I’m going to pretend we are BFFs 4EVR service that too often is becoming the norm at many restaurants. Sometimes it’s nice to feel welcome, taken care of and not obliged to engage in small-talk. 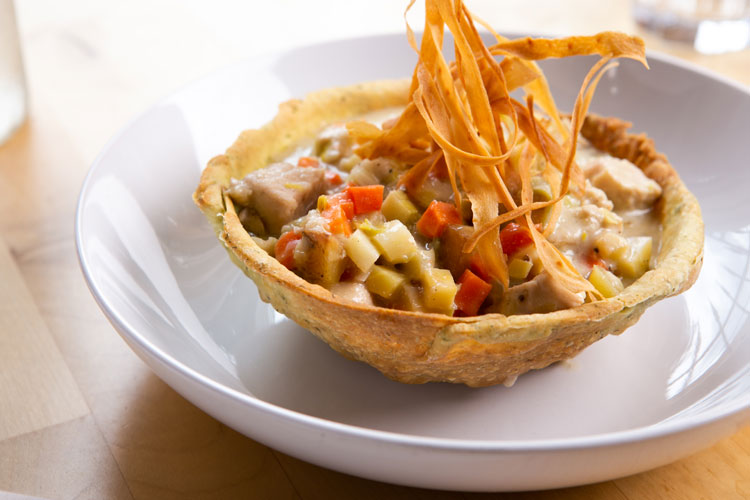 Michael helms the kitchen at night, finishing dishes on the 1930s-era burner that came with the building. His background in fine art translates to presentation — set against blank canvases mainly consisting of white plates and bowls, his dishes resemble tiny installations that are eye-catchingly bijou without feeling overthought and cheffy. Take Scandinavian chicken pot pie, for example. Here, a taupe, dill-infused pastry shell is filled with perfect dices of roasted root vegetables and chunks of chicken, seasoned with caraway and a little bit of cream, with a tall pile of crispy parsnips to add dimension and crunch. It’s not quite a pot pie as there’s no top crust, but it sure is enjoyable to eat.

A teamwork dish — piroshki, made special for a group of visiting students — was a standout, too. Stuffed with pickled cabbage, they appeared as three flaky pastries on a wood board next to a half-dome of creamy chicken salad topped with dill and three dolloped spheres of earthy black currant mostarda; there almost always is some permutation of the pastry on the menu. I’m also a fan of the noodle bowl, a pretty presentation of beef and lamb meatballs, pale green cilantro gnocchi, pickled porcini and homemade kimchi in a bright and peppy pho broth enhanced with a little heat. 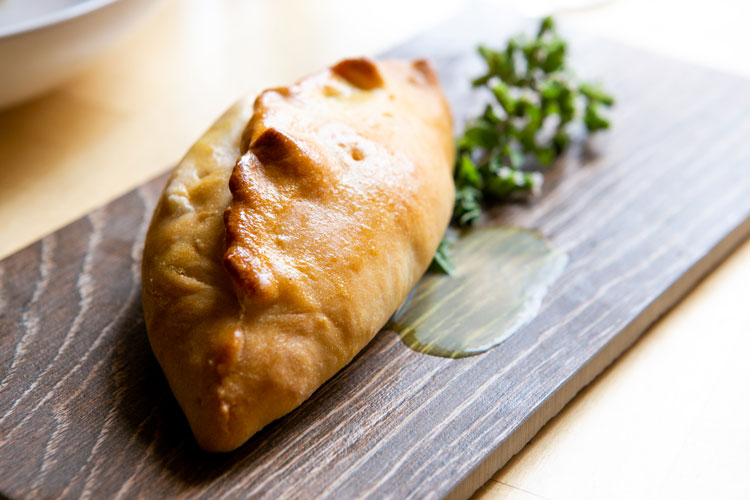 Sometimes, though, Michael’s artistry suffers in its execution. Beef rendang, informed by the period of his life where he lived in Indonesia and learned a few dishes from local restaurant owners, is brown stewed beef set against a canary yellow pickled quail egg, green cucumber salad, red tomatoes, golf-ball-sized tan and purple smoked potatoes and a slice of geometrically captivating lotus root. Most of the components are pleasing, with a lovely smoke from the potatoes and pep of pickle from the egg and lotus root, and the sambal served with it tastes of coconut, sweet, hot and perfect. However, the beef, which ought to be the star of the show, was dry as Kubu Island, ruining what could have been a lush, vibrant dish. You’d think that with all this practice  he would have noticed this and chosen to go with a fattier cut.

When my friend and I saw "roasted leg of lamb" on the menu, we envisioned a gorgeous hunk of lush meat falling off its bone. Instead, we received two slices of tough, overcooked, boneless hide shaped like hearts, and ours were a little broken by the preparation. It was the only dish I had over three visits that was outright bad.

Here’s what I’d like to see moving forward: a more dynamic menu and a little more attention paid to the provenance of ingredients. I like the consistency of the restaurant — after all, that’s why you go to a neighborhood spot (and please always have pelmeni on the menu), but I do feel as if a little more go-getting might spur the Barnhouses’ creativity and bring more of us in from all around town.

This article appears in the September 2018 issue of Pittsburgh Magazine.
Categories: From the Magazine, Hot Reads, Restaurant Reviews