Restaurant Review: LeoGreta is a Gem in the Making

With a few tweaks and a little time to settle in, LeoGreta will be the restaurant we all wish we had in our neighborhood. 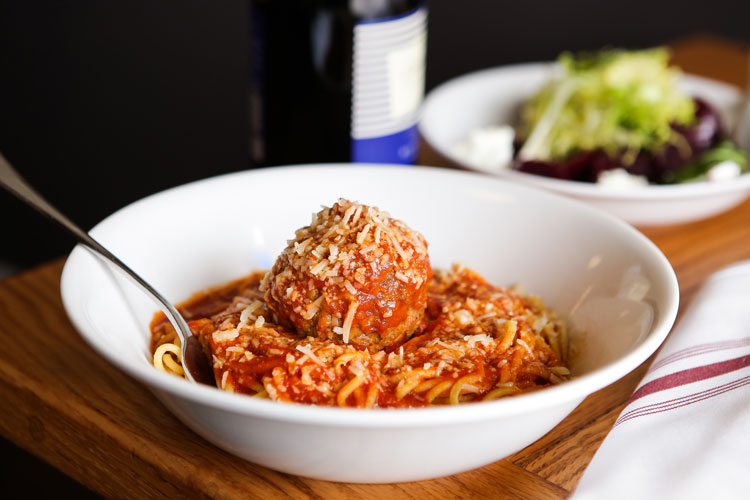 Pittsburgh is running low on places to go to for an above-average meal served at a reasonable price. As rents skyrocket in town and food and labor costs increase, there are fewer and fewer restaurants that bridge the gap between scratch-made-pricey and frugally frozen. And that’s a shame because a city with a well-rounded, thriving restaurant community needs places where you can go for a chill weekday meal with your partner or by yourself, or where you can take your visiting relative who wants a tasty dinner ordered from a menu full of recognizable dishes.

LeoGreta in Carnegie largely sticks its landing as a solid, at times excellent, neighborhood joint. I appreciate how chef/owner Greg Alauzen and his staff focus on the small details — for example, cavatelli, served as a side on some of the larger format dishes, is house-made and plated with care rather than added from a bucket of pre-cooked pasta with glops of sauce ladled on top. It opened in April and already has a loyal customer base, so be sure to make a reservation if you’re going for dinner. The 38-seat restaurant has a tendency to fill up in the evening. 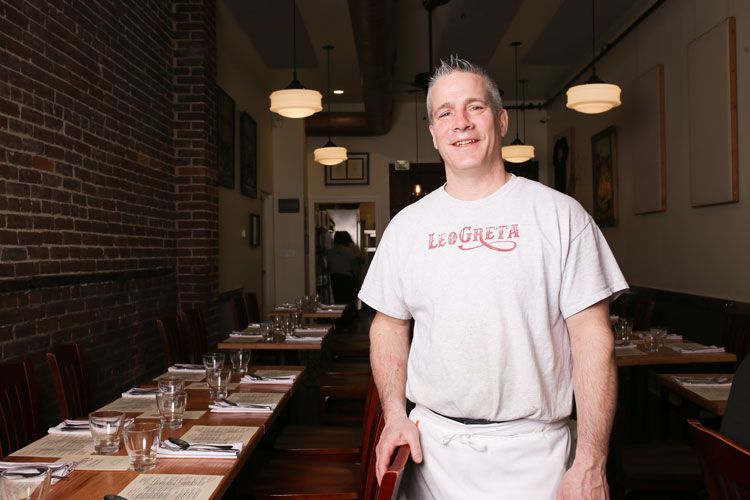 Alauzen is a bit of a local legend, although for the last few years a mostly under-the-radar one. He’s a Bridgeville native and a 1987 Culinary Institute of America graduate who went on to work in restaurants in New York and New Jersey. He returned home in 1996, taking a position as a sous chef at the heralded Steelhead Grill in the Marriott Pittsburgh City Center. He was promoted to executive chef a year later; the then-31-year-old won acclaim (and Pittsburgh Magazine’s 1998 Best New Chef award) for his menu at the fish-forward Downtown restaurant. Alauzen garnered more praise in 2004 as the opening chef of Eleven Contemporary Kitchen in the Strip District; following his two-and-a-half-year run at Eleven, he worked for seven years as the executive chef of Cioppino, also in the Strip.

After two decades in Pittsburgh cooking at other people’s kitchens, Alauzen to decided open his first local restaurant — and his first ownership venture since he ran a lauded restaurant in Metuchen, N.J., in the early 1990s — on an unassuming stretch of road in Carnegie. Lower rent, in part, is why he chose this location rather than a booming block in Downtown or the East End. 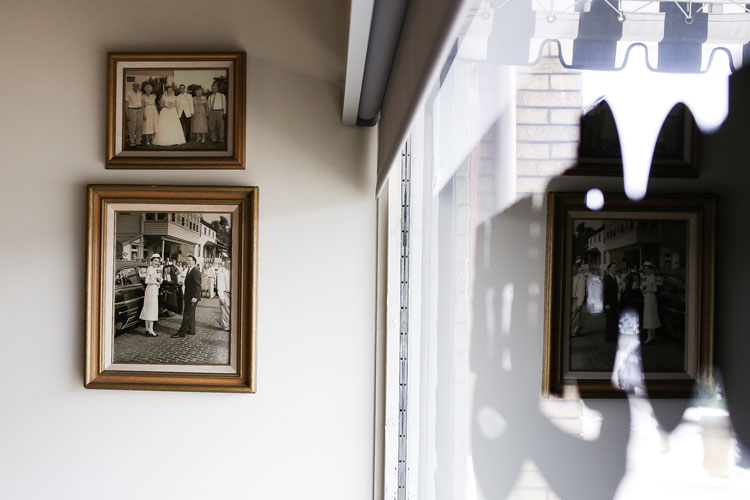 LeoGreta is a comfortable, no-frills space. There’s a room-length brick wall, old family photos and sturdy, comfortable chairs and tables. The lighting is bright enough for you to see your companions and read the menu but not so bright you feel as though you’re in a living room. There are a few nice touches — especially the purse/coat hooks easily reachable at every table. And there are a few details, such as bare rectangles of soundproofing that look like frames eagerly awaiting artwork, that need to be looked at. On the subject of art: a piece of “artwork” in the men’s bathroom reads, “A Quiet Man is a Thinking Man. A Quiet Woman is Usually Mad.” While I appreciate that LeoGreta’s approachable menu might bring easy comfort to a hungry time-traveler from the “Mad Men” era, I think we all can agree that kind of lounge-in-the-Poconos zinger wasn’t very funny then and it isn’t now.

The art stood in contrast to an otherwise warm and welcoming experience, which is just what I found each time I ate at LeoGreta. Dining at LeoGreta harkens back to a time when more restaurants had someone working front-of-house who knows you’re craving your regular order when you walk in the front door. I love how chummy the front-of-house staff is, yet how at the same time they attend to proper points-of-service such as swapping silverware between courses and re-folding napkins if you leave the table. Alauzen frequently pops out of the kitchen to say hi to regulars and introduce himself to new faces. He is a workhorse; in five visits for lunch and dinner since LeoGreta opened, I’ve seen him in the restaurant every time. 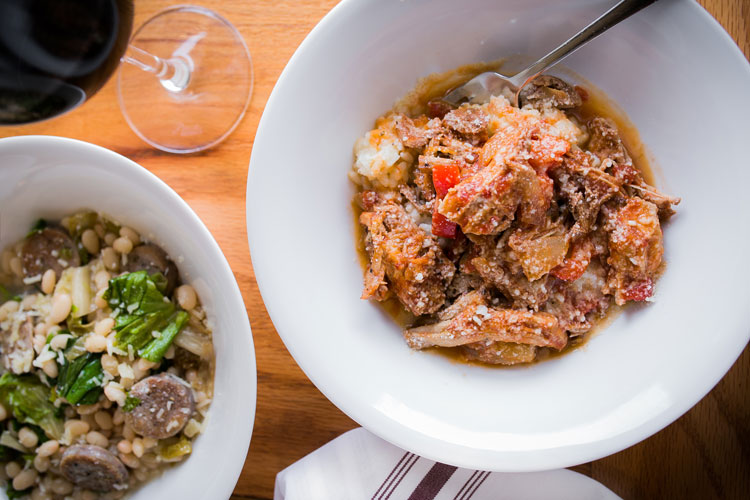 When Alauzen is on his game, he rivals anyone in town for home-style Italian cuisine. Pork ragout with risotto, a frequent guest on the specials board, is a hearty, peppy bowl of food that would make any nonna or nonno proud. His beans and greens, prepared with escarole, white beans and house-made sausage (the sweet, fennel-forward sausage frequently appears on the menu), rank as one of my favorites in Pittsburgh. And his long friendship with Nick Ambeliotis, owner of Robinson-based Mediterra Bakehouse, made for a perfect starter: Roman-style pizza with a base of Mediterra pizza bianca topped with Alauzen’s peppy San Marzano pizza sauce and creamy mozzarella cheese.

Most of the time, and this is a good thing, what he’s serving might not be exciting but it is just as it should be. Roasted beets with Goat Rodeo chevre, red wine vinaigrette and baby winter greens is a classic winter salad done right with sweet and earthy beets, creamy, slightly tart goat cheese and a light vinaigrette. Cheese ravioli tasted precisely as dictated by my nostalgia for my Aunt Arlene’s cooking — al dente pasta encasing house-made ricotta with just a hint of tartness, covered in zingy red sauce and nutty Parmesan cheese. Sandwiches, which are available day and night, make for a nice lunch; I’m a big fan of Alauzen’s sausage, rapini and pecorino combination. You’ll want to order a salad, too, however, as the crisp pickled vegetables served with the sandwich aren’t enough to round out a meal. 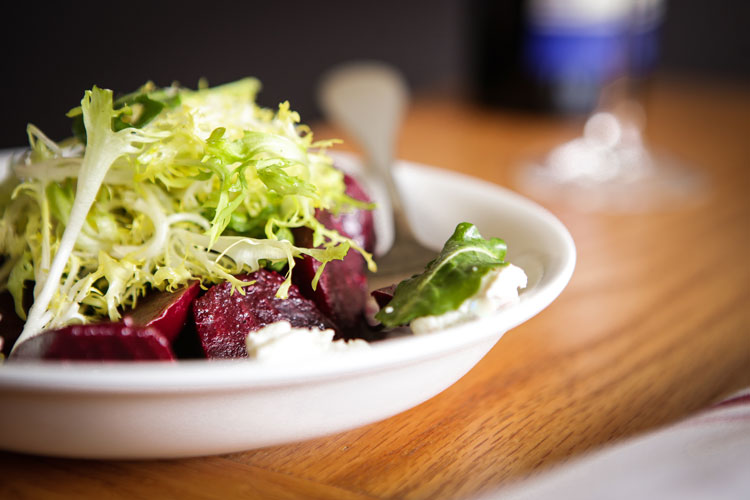 Occasionally, dishes fall as flat as the flavor and texture of butternut squash soup, one of the dishes Alauzen rotates in and out on the chalkboard menu. On one visit, gnocchi managed to be both soggy and gummy; the piquant, garlicky tomato sauce and gooey melted cheese couldn’t save it. And while a white bean dip is smooth and punchy, and dressed with a rather lovely olive oil, the bread served with it would be better toasted or at least warmed.

I happened to peek into the semi-open kitchen on the night of the soggy-gummy gnocchi and saw Alauzen mentoring a young chef. Passing on knowledge is no excuse for serving poor potatoes, but I’m willing to cut some slack here; a friend dined at LeoGreta a few days after I did and, unprompted, praised the gnocchi. Alauzen is a highly skilled chef, and it feels to me he’s cooking exactly the food he’s supposed to be cooking right now. My guess is that as he and his kitchen crew settle in, some of the imperfections (and, I hope, the poor-taste joke art) will disappear. And that LeoGreta, which even now feels like it’s been around for years, will become a neighborhood fixture — as it stands, Alauzen is already set to expand into the adjacent courtyard and building sometime this year.

This article appears in the April 2019 issue of Pittsburgh Magazine.
Categories: From the Magazine, Hot Reads, Restaurant Reviews