The meat-centric restaurant in the Strip District is helping to redefine Pittsburgh's dining expectations. 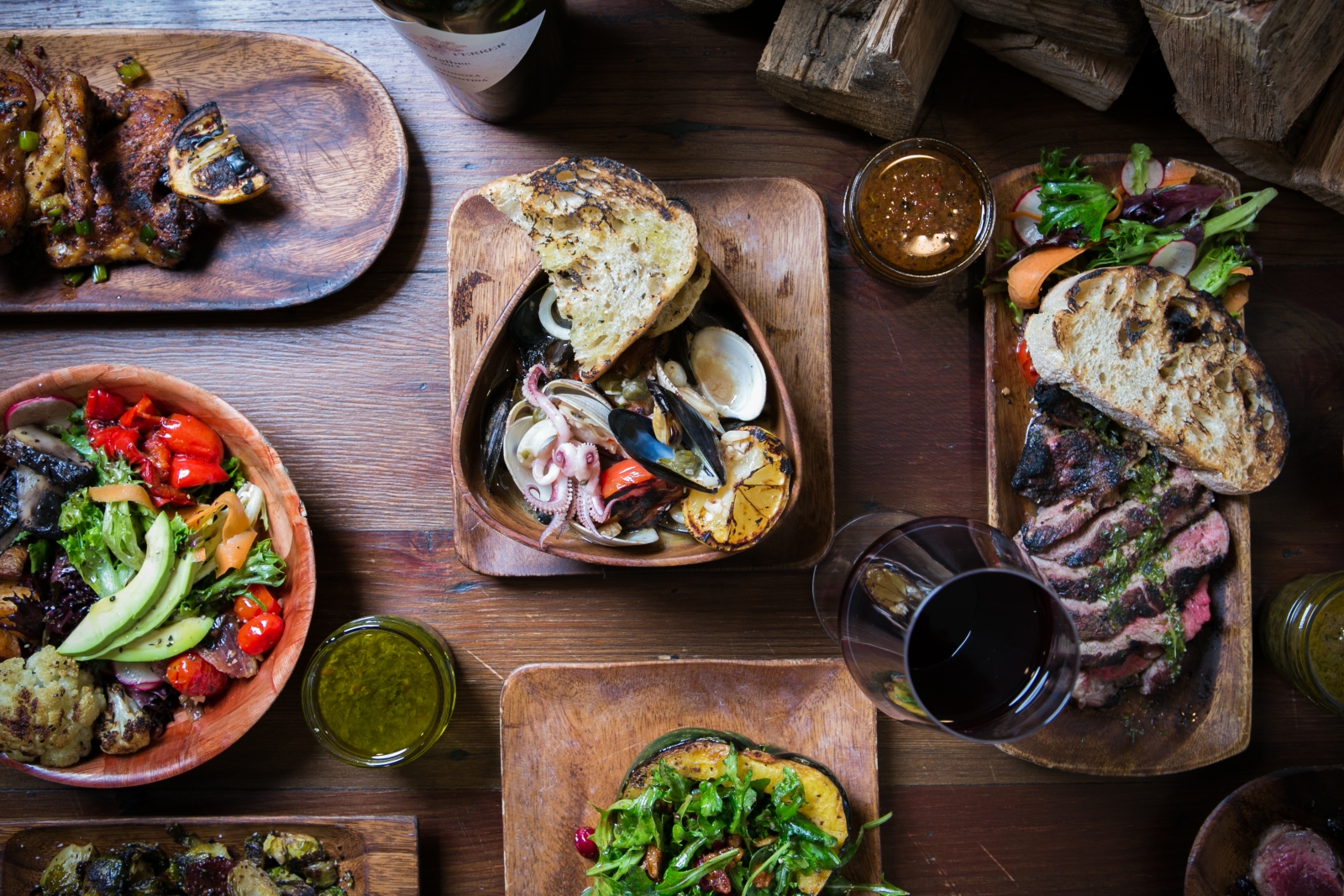 Gaucho Parrilla Argentina opened in 2013 in a cool but cramped storefront where owner Anthony Falcon quickly developed a reputation for serving fantastic steak sandwiches, plus a handful of other items.

He was a trailblazer in helping to redefine how we classify restaurants in Pittsburgh by placing food and fun over formality; even though diners had to stand shoulder-to-shoulder with fellow patrons — or at times eat in their cars — Gaucho made Pittsburgh Magazine’s 2015 Best Restaurants list.

Last year Falcon expanded into a neighboring building, reopening in May 2015 with ample seating and a more developed menu as a mature, if still very casual restaurant.

Gaucho is an equalizer. On any given day, it draws business executives in suits. Families. Millennial tech-heads. Blue-collar workers. International students holding a birthday party. Catching a wisp of woodsmoke on Penn Avenue is a siren call for Pittsburgh to hoof it and wait in line outside the eatery at the foot of the 16th Street Bridge.

Here’s the best part: aside from a couple of clunkers (don’t be tempted by the ho-hum, doughy empanadas or the poorly constructed Provolleta) the food at Gaucho is worth the wait. 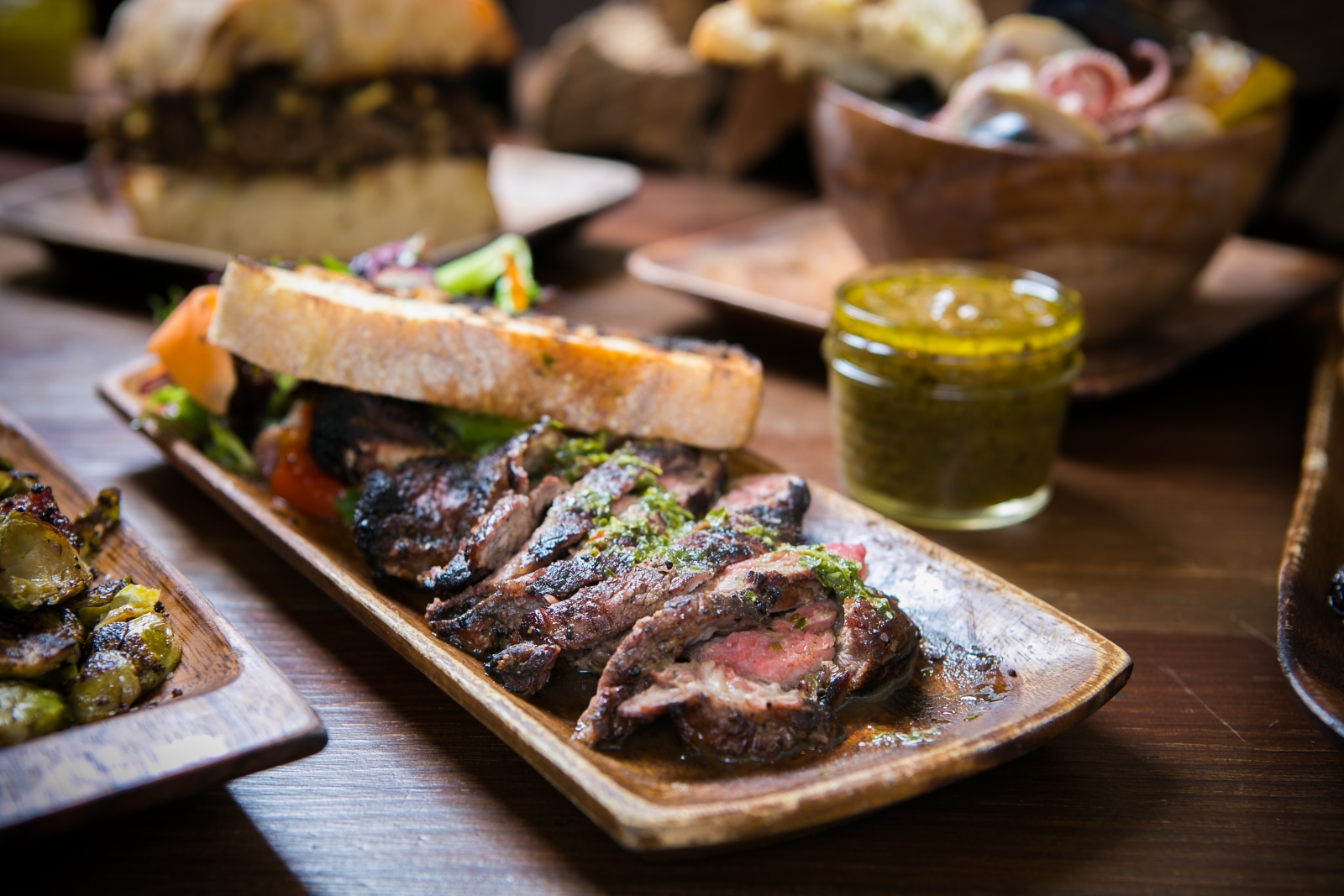 Let’s start with those steaks, which are grilled over a mix of western Pennsylvania hardwoods such as cherry, oak, hickory and osage. If you’re an ambitious eater — or, better yet, if you’re with a group — you can order the asado platter, which will get you all five cuts (flank, strip, sirloin, fillet, ribeye) at once. You also can order larger portions of individual steaks. The kitchen crew generally does a good job cooking the meat to your requested temperature, though on a few visits the outer edges of my medium-rare steaks veered a bit too medium.

Whichever steak you get — my two favorites are the strip and the sirloin — do make sure you experiment with the four house-made sauces. Chimichurri, a staple of Argentine cuisine and Gaucho’s signature sauce, is served atop the steaks. It’s a flavorful blend of garlic, parsley, oregano, olive oil and white vinegar. I like enhancing the bolder cuts with the ajo (garlic) or cebola (onion) sauces. Pair the fillet with the flavorful pimentón; the piquant and savory pepper sauce bolsters the mild meat.

Steaks also are available in sandwich form, topped with chimi, grilled onions and peppers and served inside ciabatta. 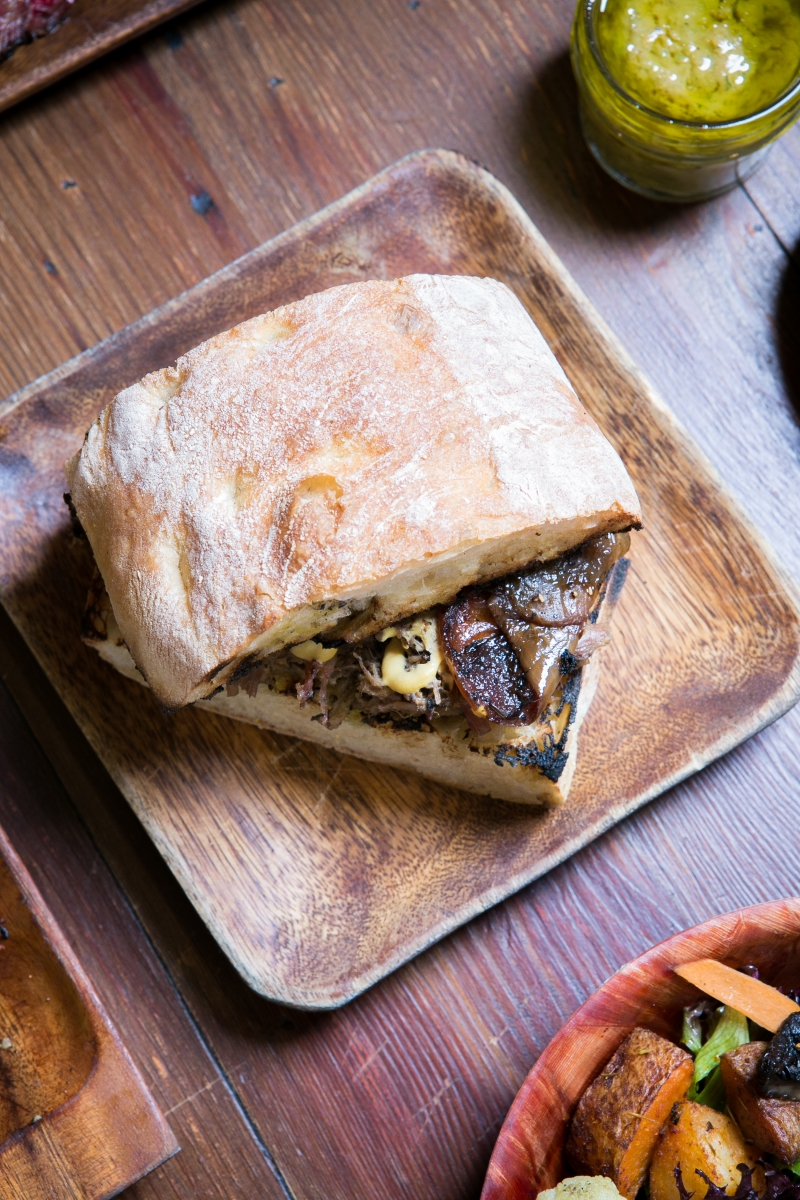 There also are a couple of post-expansion sandwiches you’ll want to order because they’re some of the best sandwiches in Pittsburgh. Rosemary-braised beef, served on a ciabatta, is full of tender meat, potent horseradish sauce and caramelized onions. Bondiola, shredded roast pork shoulder, comes with grilled onions and spicy mustard. Holy cow, they’re fantastic.

There’s also a steak burger that, if served with a more appropriate bun than the standard ciabatta, would make most people’s top burger lists. I like mine with chimi, provolone and caramelized onions.

There are noteworthy non-steak options, too. I took a big group of friends one night, and the pescado platter (grilled fish of the day) provided a clean and light counterpoint to the heavier dishes. If you’re looking for a leaner lunch, the pescado con pan (fish sandwich), with bright lemon and arugula, is a great choice. Much like the steak burger though, I would prefer to have it on a different bread.

The pollo a la parrilla (grilled chicken plate) is another success. Crisp skin is inconsistent, but seasoning and texture always are on-point, especially when paired with the pickled red onion, thyme and grilled lemon served alongside it. 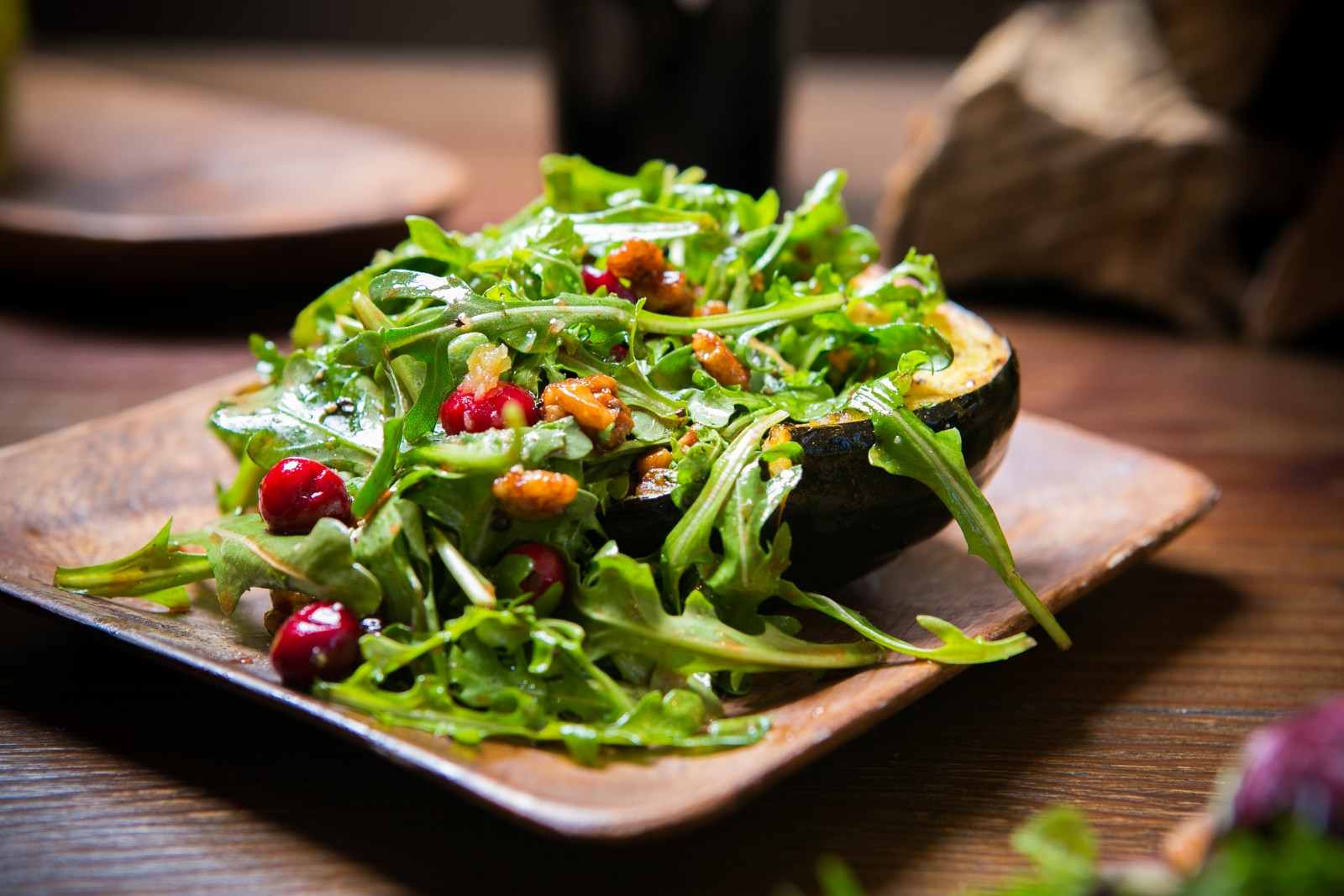 I love the stoner rock jams on the stereo and dig the friendly staffers who cruise from table to table to make sure you’re having a fun time. There’s a no-fee BYOB policy that’s a nod toward party over profit. Tip: if the line is long, the staff will open one of your wine bottles while you’re waiting to order.

There are only a few things that I’d like to see changed at Gaucho, and they’re pretty nitpicky. Even though the vibe is chill, the messiness of the food calls for cloth napkins; right now most of my meals end with piles of paper napkins on a table. And although I don’t terribly mind getting up to pull plates and silverware from a common service station, I do mind that the plates are too small to make a proper serving of shared dishes.

You can avoid the lines formed during the daily lunch crunch at noon and 1 p.m. by showing up in the between-times, and dinner tends to be crowded but less hectic. You’ll still likely have to wait a bit.

Oh well. For Gaucho, it’s worth it. 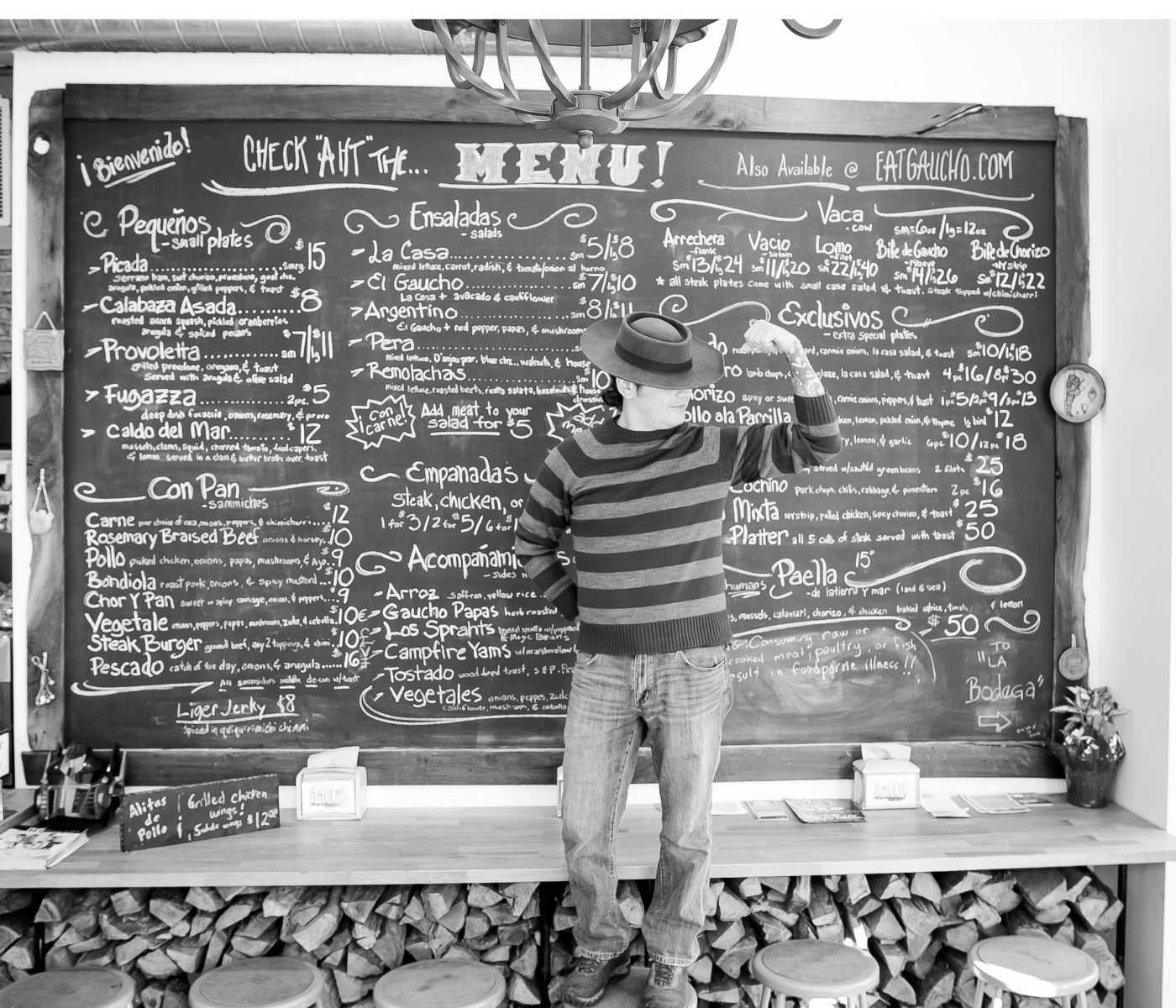 Why open an Argentine restaurant in Pittsburgh? Where did the idea come from?
I grew up in Brooklyn and loved the parillas (Argentine grills) that were there and in Queens. When my parents and my uncle Sergio were visiting Pittsburgh a few years ago, I took them to the Strip District. It’s a melting pot of different cultures and ethnicities. So the idea got brought up for me to open a parilla there because there wasn’t anything like it. My uncle is from Uruguay, and he said that if I went down there and cooked with the gauchos I would totally hold my own. That gave me the courage to decide to do this … and within a few months I was doing it.

What’s your culinary background?
I’ve kept that pretty secret! I’ve been a chef for a long time. Even when I was a little kid walking to school in Brooklyn, I’d peek inside the Chinese restaurants on the way to school and I’d try to get them to teach me what they were doing, but they’d always run me off. My first professional job was when I was 14; I worked in a Sheraton in eastern Pennsylvania. When I was 21, I was considered one of the youngest executive chefs in the east; I worked at Cafe Victoria here in Pittsburgh, this was ’93 or ’94. I went to the Pennsylvania School of Culinary Arts, then an externship at the Peabody Hotel in Florida and then back here for a short stint at LeMont. Then there was this guy Bill Fuller [corporate chef of big Burrito]. I wanted to go learn from him. So I went to Soba [and] did my stint with the big Burrito Group, but eventually they cut me loose. So I hopped on my motorcycle to Vegas. I did a stint with Wolfgang Puck’s Chinois and then opened a place called the Eiffel Tower restaurant [in the Paris Las Vegas hotel]. By the time I left Vegas, I was assistant executive chef for Paris hotel and Bally’s hotel.

Your kitchen here always seems to be hopping.
I love it. My favorite thing is to take people [who] have interest in something and work with them on it. When we first started, it was my experience and talent that we had to offer. And now we have all these young people who came in here with discipline, desire and motivation. And that’s the fundamental foundation for success. They started with very little experience, but we trained them to make great product with the end result in mind and also to have fun while they’re doing it.

This article appears in the February 2016 issue of Pittsburgh Magazine.
Categories: From the Magazine, Hot Reads, Restaurant Reviews